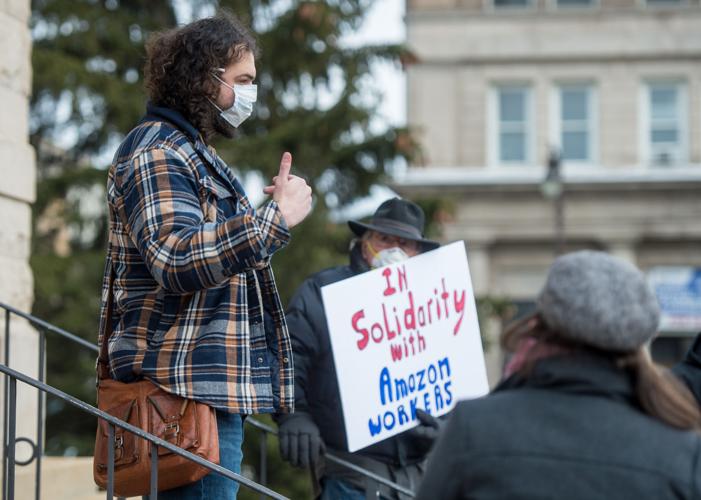 Nevin Zehr, of Harrisonburg, speaks during a protest on Court Square on Saturday in solidarity with the unionization efforts of Amazon workers in Bessemer, Ala. 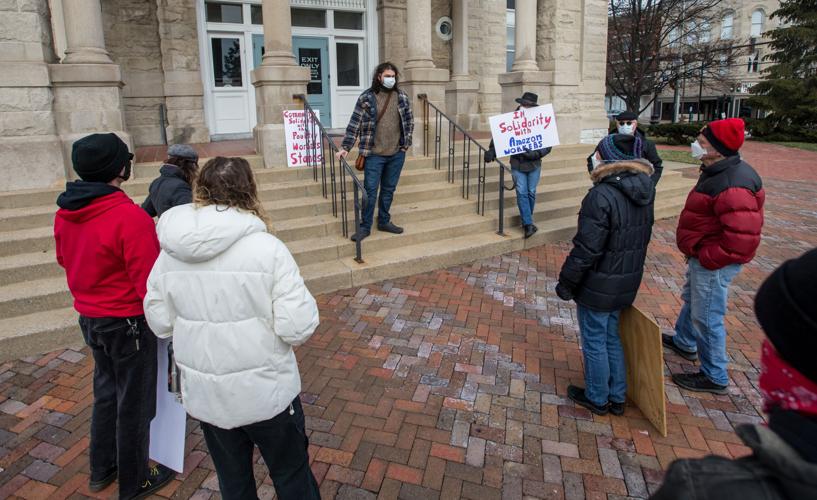 Nevin Zehr, of Harrisonburg, speaks during a protest on Court Square on Saturday.

Nevin Zehr, of Harrisonburg, speaks during a protest on Court Square on Saturday in solidarity with the unionization efforts of Amazon workers in Bessemer, Ala.

Nevin Zehr, of Harrisonburg, speaks during a protest on Court Square on Saturday.

The unionizing efforts at an Amazon warehouse could spark renewed attempts to unionize at poultry plants in the Valley, activists said.

On Saturday, Community Solidarity with the Poultry Workers hosted a small rally to call on tech-giant Amazon to stop interfering with efforts to unionize workers at a warehouse in Bessemer, Ala.

Amazon is owned by one of the world's richest men, Jeff Bezos, who also owns the Washington Post and aerospace company Blue Origin. Bezos' net worth was $191 billion before his 58th birthday on Wednesday, according to Forbes.

Late last year, the National Labor Relations Board, which oversees workforce's election on whether to unionize workplaces or not, ruled a new election was in order after it upheld a lawsuit from the Retail, Wholesale and Department Store Union accusing Amazon of interfering and pressuring workers in the election.

"If the unions get a major victory like organizing Amazon, that's going to electrify the labor movement and encourage unions to organize workers in all kinds of industries, including poultry," said Michael Snell-Feikema, an activist with Community Solidarity with the Poultry Workers. "The possibilities of workers organizing [here] are tied with the possibilities of other workers being organized."

He said issues facing the workers at the Amazon warehouse are similar to those faced by poultry plant workers in the Shenandoah Valley, especially around the speed of lines.

The low unemployment rate has resulted in better working conditions for poultry plant workers, as employers compete with each other to attract employees.

Harrisonburg's unemployment rate was 2.2% in November — a near record low, according to the most recent and preliminary data from Bureau of Labor Statistics.

The inability for employers to find workers results in increased wages and benefits, but the labor shortage also presents difficulties to a business’ ability to grow, operate and generate profit.

Some companies have cited increased labor costs as reasons for price increases, even while their profits have continued upwards, according to their most recent earnings reports.

Snell-Feikema said though wages and benefits are getting better for workers, there are still things unions can offer workforces that management still does not want or cannot offer employees to get them to work at facilities.

The last unionizing effort in a poultry plant was at Cargill in Dayton in 2017. It was unsuccessful.

A former union organizer in the effort for United Food and Commercial Workers Local 400, Guillermo Zelaya, agreed the example set by the Amazon workers in Bessemer could impact interest at similar facilities like poultry plants in the Valley.

"It will affect workers everywhere," he said.

When workers see that it can be done, and what can be gained, they will reckon themselves unionizing might be worth the effort, according to Zelaya.

At the beginning of the pandemic, activists and some poultry plant workers claimed the facilities were not doing enough to mitigate spread of COVID-19 in the workplace. In July 2020, Virginia became the first state in the nation to adopt emergency temporary standards for employers during the COVID-19 pandemic.

The organizations Community Solidarity with the Poultry Workers, Virginia Organizing and the Legal Aid Justice Center petitioned the State Board of Health and the Safety Health Codes Board to increase protections for farm workers as well as poultry and other meat-processing workers during the pandemic.

Management at plants said they were doing all they could since, like health care facilities, they too faced a shortage of masks and other COVID-19 mitigating materials.

Additionally, case numbers in the workforce could not all be attributed to the plants as many workers live in multi-generational households where multiple family members work in different areas and thus could have contracted the virus outside of the workplace from family members or friends.

On June 22, 2020, the Virginia Poultry Federation, along with the Harrisonburg-Rockingham Chamber of Commerce and over 25 other business groups, submitted a joint letter voicing concerns about the then proposed emergency standards to the Virginia Department of Labor and Industry.

Hobey Bauhan, director of the VPF, said "I can’t really speculate on how a yet-to-occur vote at an Amazon warehouse in Alabama could affect the poultry industry in Virginia," in a Sunday afternoon email. "I don’t really see a strong connection."

Chris Quinn, president and CEO of the H-R Chamber of Commerce, also said speculation about how the union vote would impact area plants would be difficult until the Amazon final vote occurs.