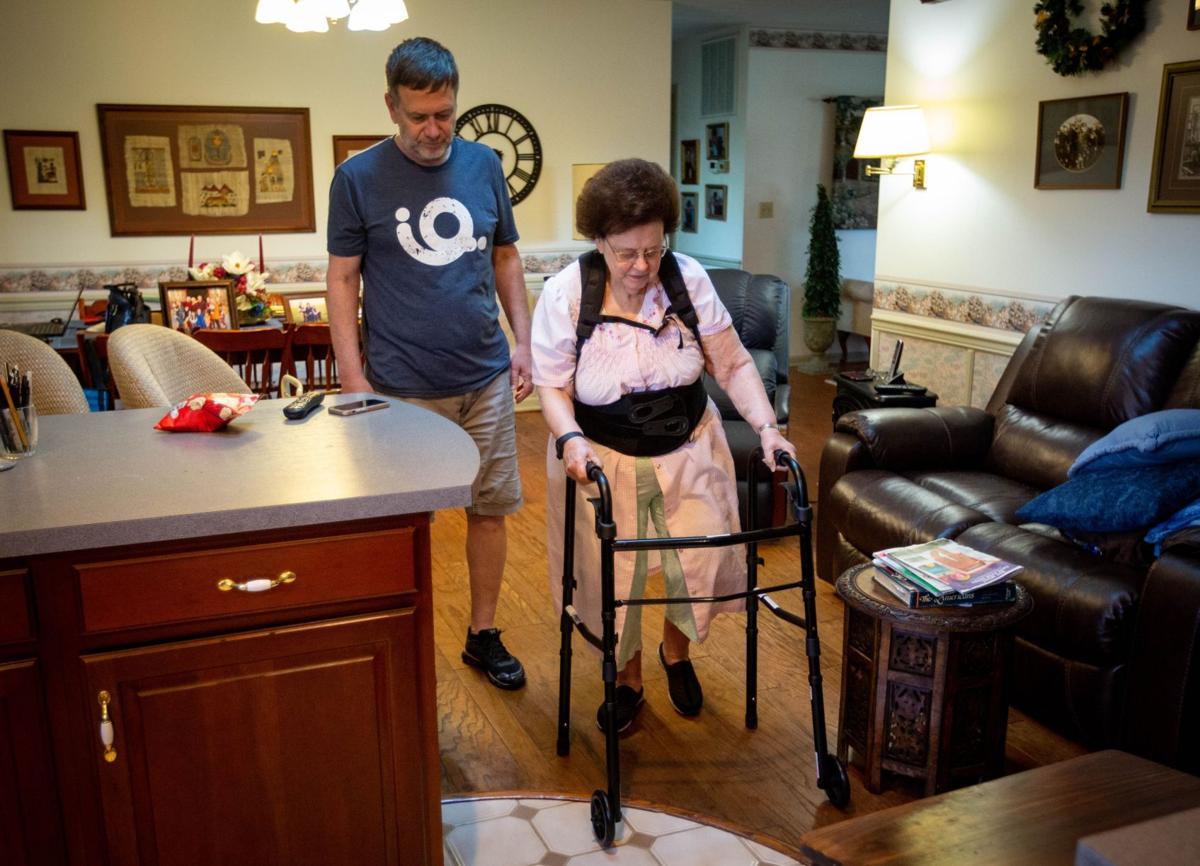 Phoebe Orebaugh, 85, is helped through her house by her son Shannon Orebaugh on Friday. The Orebaughs have been navigating changes to Medicare that Phoebe says don’t make sense and add extra hurdles to receiving care. 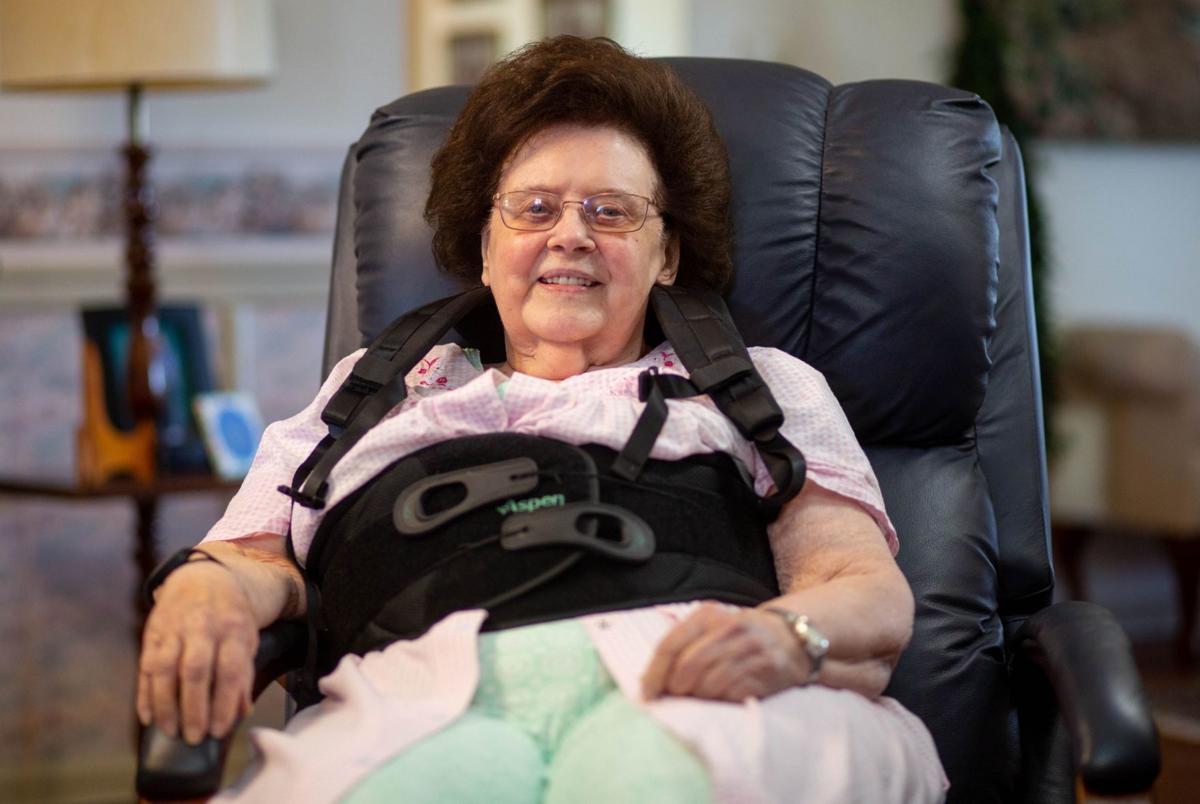 Phoebe Orebaugh, seen in her Broadway home, is a retired educator and state lawmaker. 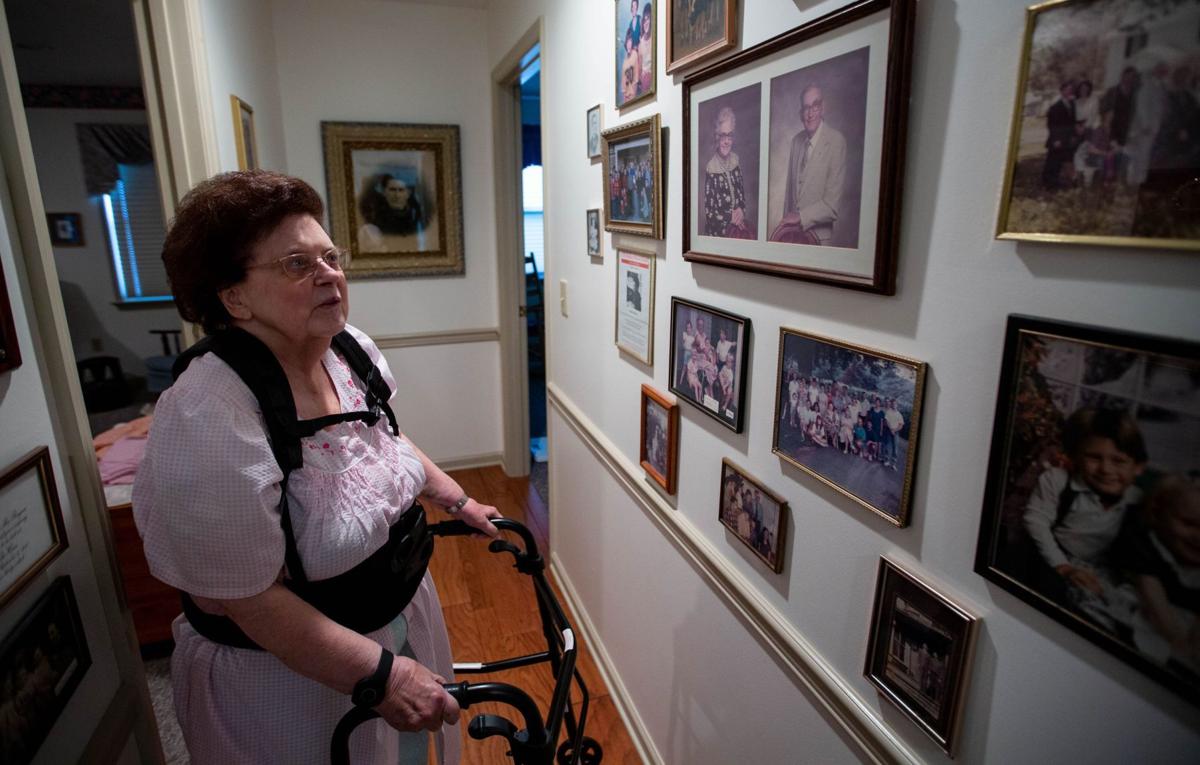 Phoebe Orebaugh looks at pictures in the hallway of her Broadway home.

Phoebe Orebaugh, 85, is helped through her house by her son Shannon Orebaugh on Friday. The Orebaughs have been navigating changes to Medicare that Phoebe says don’t make sense and add extra hurdles to receiving care.

Phoebe Orebaugh, seen in her Broadway home, is a retired educator and state lawmaker.

Phoebe Orebaugh looks at pictures in the hallway of her Broadway home.

By the 27th, she couldn’t get out of bed because the pain was so severe. So, her family, including son Shannon, called the rescue squad.

For the next six days, Orebaugh was at Sentara RMH Medical Center. But as her family tried to set up a placement at a skilled nursing facility for their mother’s release, they were presented with a startling fact.

Such care would have to be paid for out of pocket due to a technicality with their mother’s care — she was on observation status, not classified as inpatient. Medicare will pay for a patient’s skilled nursing care after three days of inpatient care.

Even though Orebaugh was at the hospital for six days, getting the same care she would have otherwise, it didn’t count.

“I thought when you were in a hospital room, you were inpatient. That was a bad assumption,” Shannon Orebaugh, of Broadway, said.

The list of services and surgeries counted as inpatient are dwindling due to Medicare changes under previous presidential administrations. Many of the recent changes are due to rules going into effect from an executive order under the Trump administration. The Centers for Medicare and Medicaid Services said these changes increase patient choice, protect taxpayer dollars and lower out-of-pocket costs in the final ruling for calendar year 2021.

But for the retired legislator and teacher Orebaugh, these changes don’t make sense when she’s been paying into the program since its creation in 1965.

“It seems like an awful lot of trouble to go through to get what was coming to me in the first place,” Phoebe Orebaugh said.

Paired with a requirement of at least three days as inpatient — counted by midnight presence in a facility — results in a “bleak” situation for Medicare recipients without loved ones or family members, according to Amy Adkins, Virginia insurance counseling and assistance program coordinator for Valley Program for Aging Services.

“I think [Medicare recipients] are seeing their choices or pathways shrink in options,” Adkins said. “They aren’t there if they know Medicare isn’t going to cover a skilled nursing home.”

For those who cannot afford any out-of-pocket costs, there is Medicare-covered home health, she said. However, that service is limited, according to Adkins. Home health covers only medically authorized care.

“There’s nobody there that can be a support person in their home to ensure their safety while they’re attempting to bathe, ambulating around the house, getting in bed; so, there’s risks of falling,” Adkins said.

The movement of more care to observation instead of inpatient covered by Medicare has been a trend for the last decade to a dozen years, according to Toby Edelman, senior policy attorney for the Center for Medicare Advocacy.

“We started hearing from people in the hospital who needed to go to a skilled nursing facility, but in order to qualify for Medicare, they needed to have a three-day stay,” she said.

Thus, there is an increasing trend of paying out of pocket for skilled nursing, Edelman said, and the most calls the center receives every year are about this.

There is still a path for support funding through Medicaid for some Medicare recipients, but it is only for a short period of time and requires a high level of medical expenses, according to Adkins.

There was a waiver for the three-day inpatient requirement at the beginning of the pandemic that has become harder and harder to obtain, though the waiver still exists, according to the Centers for Medicare and Medicaid Services.

The shrinking number of automatic inpatient surgeries and procedures also impacts hospital systems, according to representatives from Sentara and Valley Health.

They said it doesn’t matter how a patient is classified, inpatient or not, they receive the best care possible.

At Valley Health, about 69% of operating room cases were outpatient in 2018 and 2019. This figure jumped to 76% in 2021 as the services on inpatient Medicare rolls continue to spiral down.

Previously, the Centers for Medicare and Medicaid Services had 1,740 surgeries and services that Medicare would pay for only when patients were in the hospital as inpatients, according to reports in Kaiser Health News.

This year, 266 of those services will be removed from the inpatient only list, which is slated for complete erasure by the end of 2023.

“I think the first group to go was shoulders and last year it was knees and this year it’s hips” she said.

These surgeries would then be looked at by audits where Medicaid would take back money from Sentara if it performed a surgery that was mistakenly still classified as inpatient.

These changes also caused confusion among staff and patients alike, according to Schnittger.

Doctors can still mark down surgeries and services as inpatient based on the patient’s health, but it requires extra work and documentation to prove to auditors the move was necessary, she said.

“Quite frankly, it’s more work on their part, and there’s no real benefit,” Schnittger said.

And patients are responding with anger and frustration when doctors and other hospital workers have to explain the changes they had nothing to do with, according to Matt Toomey, Valley Health vice president of patient financial services.

“They are faced with a lot of pushback and confusion from the patients who think they were in inpatient,” Toomey said. “That’s been happening already.”

Patients are presented with what is called a MOON form, Medicare Outpatient Observation Notice, which explains a patient is in outpatient care, not inpatient.

And when a family member is discharged without reaching three days, it is often loved ones who must take time off from work or commit even more time to their elders to make sure they recover fully from their medical issues because they can’t afford skilled nursing care.

“That can be harder for families,” Toomey said.

For Phoebe Orebaugh’s children, their mother’s safety was their prime concern when she was discharged. And after a few more days back at her home, she had more health issues and had to return to a hospital.

She arrived at Augusta Health on Thursday morning with more severe pain and was moved to a room.

“I kept asking the same question over and over — what’s her status?” Shannon Orebaugh said of the following days.

As of Monday afternoon, she was on track to reach three days as an inpatient, opening the door for nursing home care. They have opted to go with Life Care Center of New Market for rehab.

Phoebe Orebaugh said elected representatives should listen to the concerns and make policies that help Medicare recipients obtain affordable care. She also thanked her family for being there for her.

“I was fortunate in having people who helped a good deal, but not everyone has that advantage,” she said. “And the thing is, [patients] need to be told at the very beginning this what you need to do and this how you do it.”

CORRECTION: A typical day of skilled nursing rehab costs around $500 to $600 a day, according to Edelman.

During a Tuesday call with reporters, U.S. Sen. Tim Kaine, D-Va., said he had not heard about how a small, recent Medicare change was impactin…