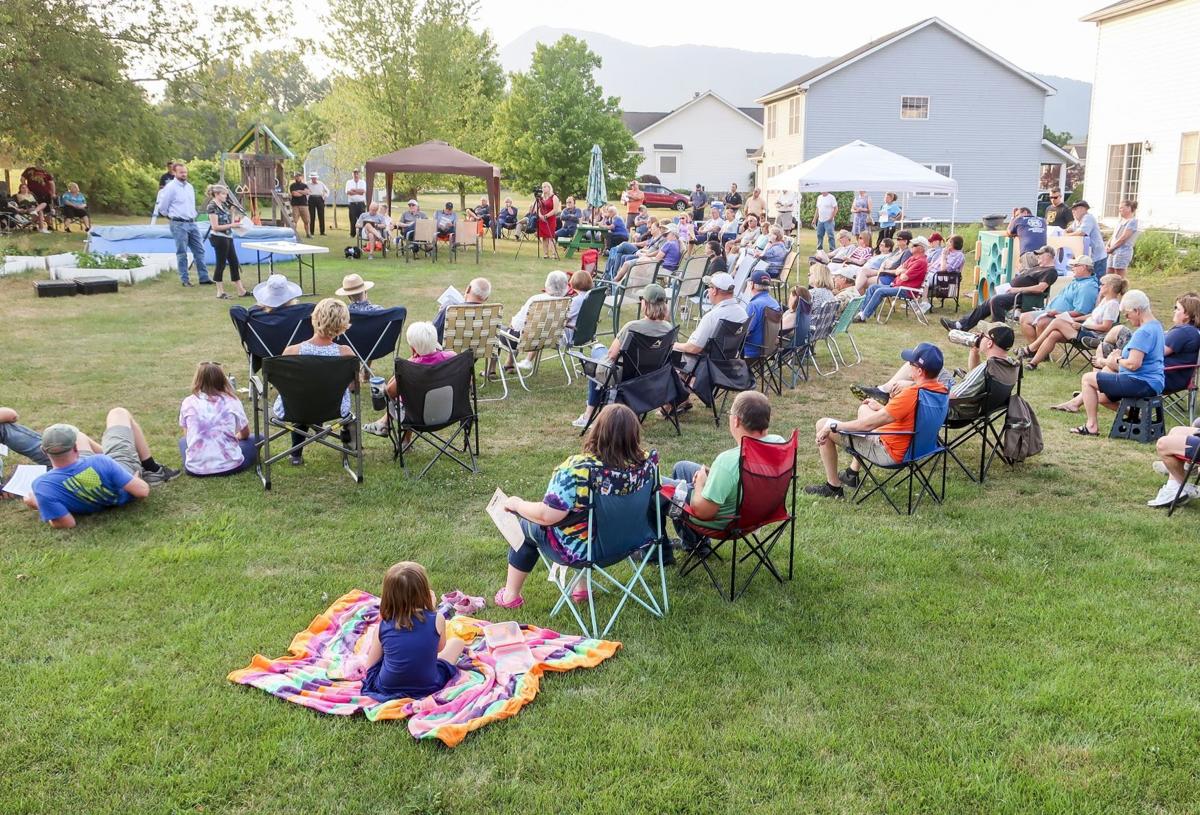 Over 100 neighbors gathered on Wednesday in McGaheysville to discuss their opposition to Peak Mountain, a proposed 155-unit single-family home subdivision on nearly 42 acres of agricultural land. County elected officials and staff, as well as developer representatives, attended the gathering. 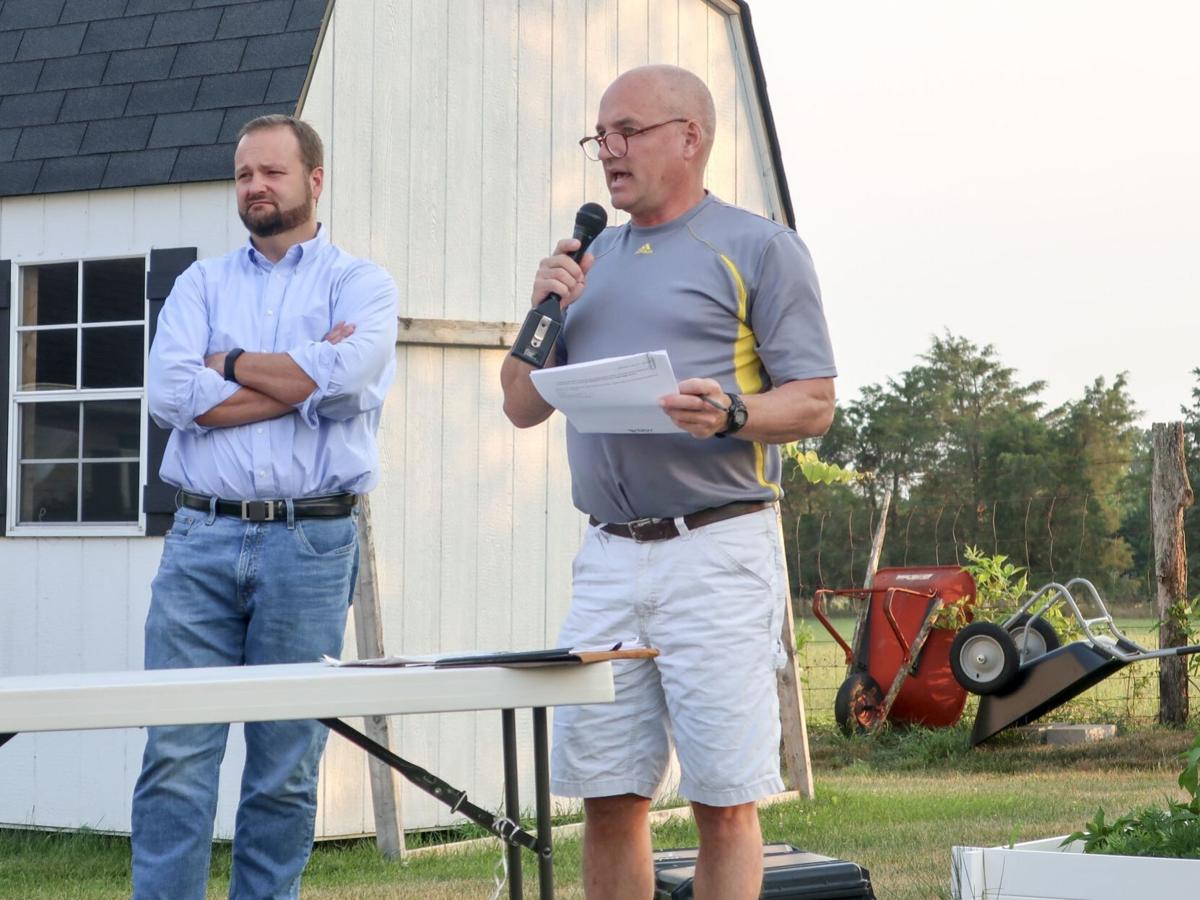 Chip Long, 60, of McGaheysville, right, speaks about his issues with the Peak Mountain development Wednesday evening. Long used to catch frogs as a kid in a pond the development would keep. He said he’s not against development, but that the growth in the area is going too fast.

Over 100 neighbors gathered on Wednesday in McGaheysville to discuss their opposition to Peak Mountain, a proposed 155-unit single-family home subdivision on nearly 42 acres of agricultural land. County elected officials and staff, as well as developer representatives, attended the gathering.

Chip Long, 60, of McGaheysville, right, speaks about his issues with the Peak Mountain development Wednesday evening. Long used to catch frogs as a kid in a pond the development would keep. He said he’s not against development, but that the growth in the area is going too fast.

McGAHEYSVILLE — Chip Long of McGaheysville began catching frogs to eat from a pond near his home in the final years of his time in elementary school.

Now, roughly 50 years later, that same pond is proposed to be part of a 155-unit single-home development on nearly 42 acres of agricultural land near the childhood home where he lives again.

Long was one of over 100 neighbors who gathered in the backyard of Jared and Sarah Lamb on Wednesday evening to discuss their problems with the proposed development, called Peak Mountain.

“If those houses were a smaller density, if they fit the area better, there probably wouldn’t even be this meeting,” Sarah Lamb said. “That’s our concern. The incredible density.”

Property owner Karin Flagle, with Harman Realty, is requesting the site be rezoned to a residential district. The subdivision is compatible with comprehensive plan goals, according to county documents. The land is in election District 5.

Many of the residents who attended Wednesday’s gathering were also present at the Planning Commission meeting, where they spoke about why they oppose the project.

Many of the points laid out by neighbors to Planning Commission on July 6 were reiterated and expanded upon, such as how the proposed development is out of character from the other types of homes it will brush up against.

Neighbors also spoke about how they recognize the area is slated for growth and there needs to be growth in the county, but it should fit in with the county’s plan for McGaheysville, which was approved by the Board of Supervisors in 2007, according to the document.

The plan’s vision statement for the area includes that McGaheysville “remains a small, historic, rural village,” is “beautiful” and “safe,” has good facilities and services and “remains a strong, vibrant rural community with a balanced local economy,” according to the plan.

The target size of the homes is 1,600 square feet with options for larger or smaller structures, according to a July 6 text from Seth Roderick, a managing partner of Monteverde Engineering and Design Studio and representative of the developers. Roderick, along with Sean Hesse of Harman Realty, were at the Wednesday gathering.

Population growth in the county also is putting a strain on schools, neighbors said, as Rockingham County Public Schools will consider building a new high school due to continued growth in the Spotswood High School district.

Neighbors and others also discussed how the increased traffic will impact an already congested situation on McGaheysville Road and U.S. 33, and shared their own experiences with the vast array of agriculture trucks and increasing number of passenger vehicles. Water runoff is also an issue for those who live near the potential development.

Breeden said it was too early for him to make a decision on how to vote on the project as it’s been proposed. He said he wants to hear from the developers the same way he heard from the neighbors on Wednesday.

“At some point, we’ll be acting on it, and I’ll certainly remember everything I heard here today,” he said.

Chandler said there should be more meetings like Wednesday’s, where neighbors express their concerns and developers are present to listen.

He said that could potentially lead to mutually satisfactory changes to a proposed development that reduce contentious public hearings and move projects forward organically.

“Those kinds of discussions and sharing of information, you might have a number of people that have red flag questions or concerns, they can be addressed ahead of time,” Chandler said.

By the end of the Wednesday gathering, a petition against the development had surpassed 200 signatures and now stands at nearly 240, according to Sarah Lamb.

“We were really excited with how many people come out to support their community,” she said.

Lamb and others encouraged neighbors to reach out to county staff and elected officials and respectfully voice their opposition to the project.

Though he can remember when he and his neighbors didn’t lock their doors and when McGaheysville Road went into Harrisonburg, Long — like his neighbors — is not against development full stop.

“I think we’re going a little bit too fast,” he said.

“ … of McGaheysville began catching frogs to eat from a pond near his home in the final years of his time in elementary school.”

I assume this was prior to the introduction of school lunch programs. [beam][beam][whistling]