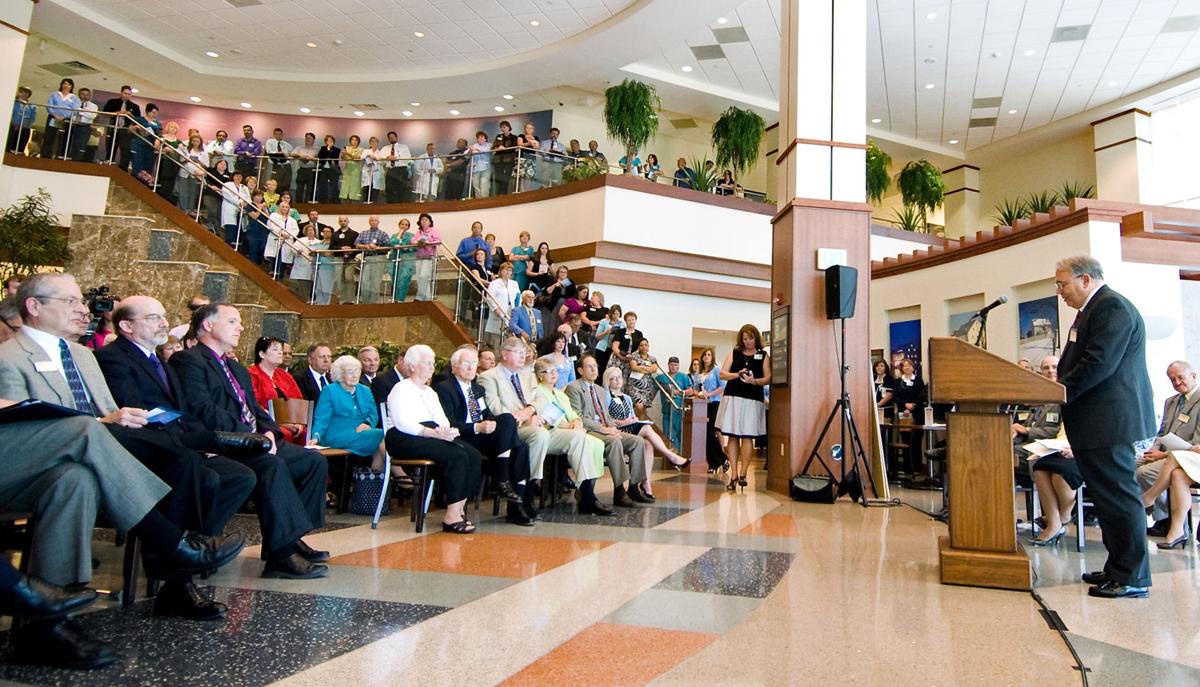 Marc Sharp, then-chair of the Sentara Healthcare Board of Directors, addresses a large crowd assembled in the main cafe of Rockingham Memorial Hospital as RMH and Sentara celebrated their official merger in 2011. 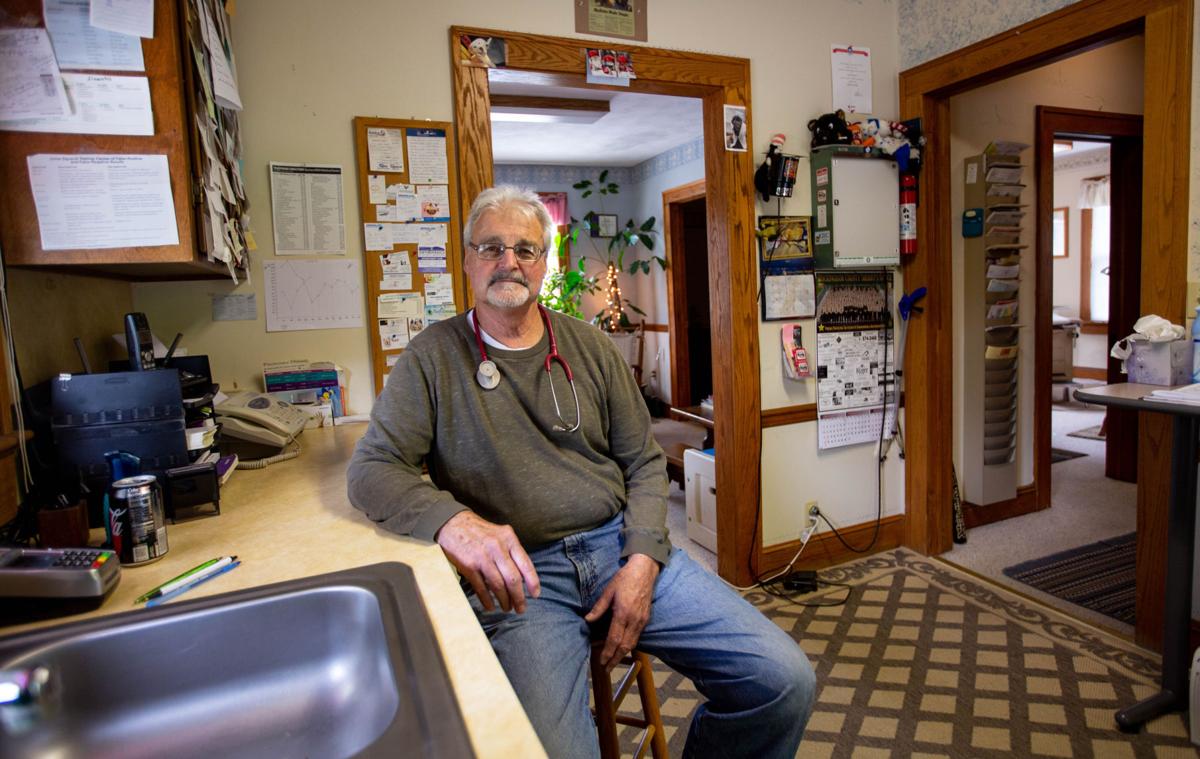 “I think it’s probably wrong to try and target Sentara out of the mass of Sentaras out there and say ‘They’re the problem,’” says Dr. Andrew Blay, a former doctor at RMH. “The problem is business has taken over medicine. That’s the problem. There’s no easy solution for that because a lot of people are making a lot of money.” 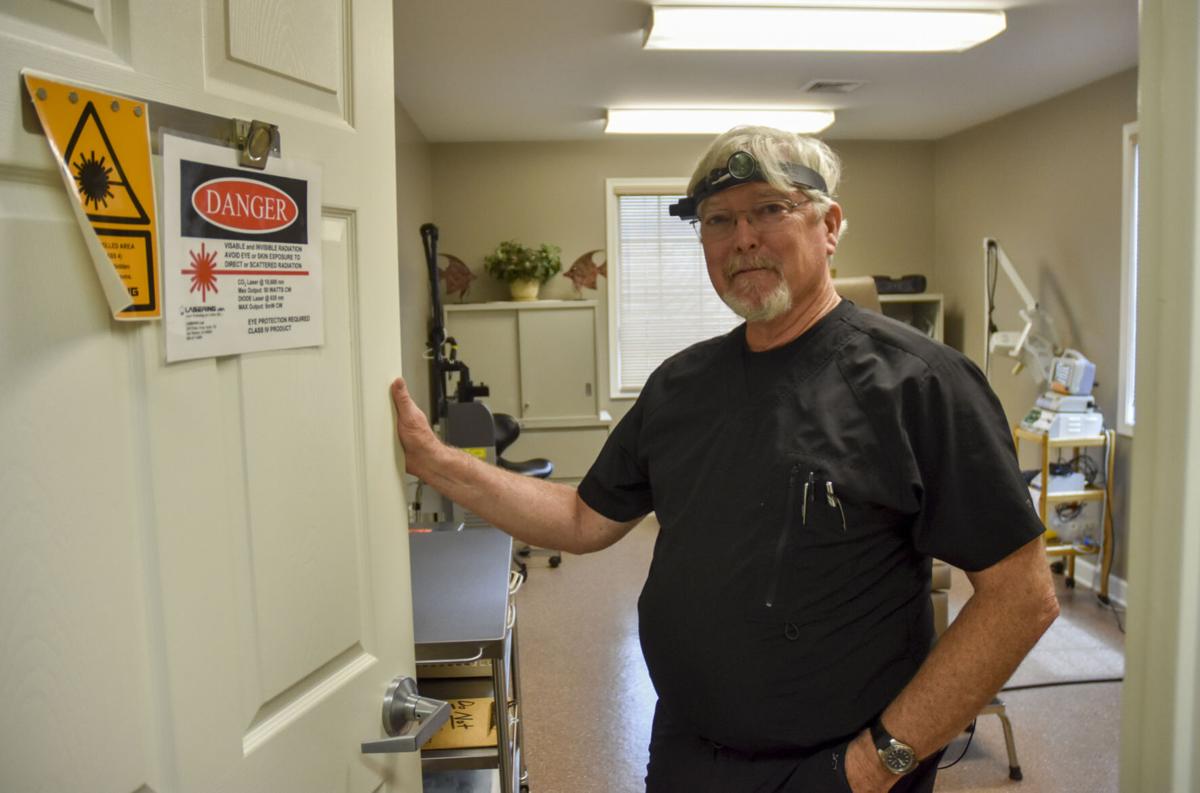 Dr. Wayne Gates was a member of the Rockingham Memorial Hospital Board when it voted unanimously to approve the merger with Sentara over a decade ago. He has been practicing medicine in the Valley since 1985 and is now at Meadow Crest ENT in Harrisonburg.

Marc Sharp, then-chair of the Sentara Healthcare Board of Directors, addresses a large crowd assembled in the main cafe of Rockingham Memorial Hospital as RMH and Sentara celebrated their official merger in 2011.

“I think it’s probably wrong to try and target Sentara out of the mass of Sentaras out there and say ‘They’re the problem,’” says Dr. Andrew Blay, a former doctor at RMH. “The problem is business has taken over medicine. That’s the problem. There’s no easy solution for that because a lot of people are making a lot of money.”

Dr. Wayne Gates was a member of the Rockingham Memorial Hospital Board when it voted unanimously to approve the merger with Sentara over a decade ago. He has been practicing medicine in the Valley since 1985 and is now at Meadow Crest ENT in Harrisonburg.

In October 2010, Keith Spitzer was at the Harrisonburg First Church of the Nazarene for a forum about the ongoing merger efforts between Rockingham Memorial Hospital and nonprofit hospital group Sentara.

Spitzer asked then-RMH president and CEO Jim Krauss if there would be a way out of the merger if it wasn’t working and how the merger would impact local hospital workers.

“I’ve gone through the ‘bloody Mondays’ where you lose 40 people,” Spitzer said this month.

In the decade since the forum, Spitzer has been a patient for three surgeries at Sentara RMH Medical Center.

This spring marks the 10-year anniversary of the merger between Sentara and RMH that went into effect on May 1, 2011 after being approved by regulators on April 1 that year.

Part of the merger included a commitment of $269 million from Sentara to the Valley hospital that must be spent over 20 years. The remainder that isn’t spent when the clock runs out will be given to the RMH Foundation, according to the affiliation agreement documents.

Of the original commitment funds, $167 million remains, according to Moyer.

“We have campuses in many locations: Timber Way to the north and East Rockingham to the east, etc., so we’re likely going to find ways to try to expand access in those locations, but also grow elsewhere, depending on what our community needs analysis tells us,” he said.

Next year, an ambulatory imaging center focused on CT and MRIs is planned to open at the Sentara Bridgewater Health Center, according to Moyer.

The original decision to merge with Sentara was unanimous among the RMH board members, according to Dr. Wayne Gates, who was on the board at the time and has practiced medicine in the area since 1985.

“I think everyone on the board at that time gave an honest look and the best decision they could,” Gates said. “And it’s not been all roses, but it’s not been bad either.”

George Pace was another board member during the merger. He had been on the board of RMH for a decade before and stayed on after the merger for another two years to oversee that everything Sentara promised to do in the merger would be done.

“From an external perspective, consolidation within the hospital industry was not only happening, but accelerating,” Pace said of the deliberations from a decade ago.

He said the independent hospital was facing higher costs for capital expenditures every year to keep pace with technological advancement and was being “squeezed” by large insurance company Anthem on reimbursements for care.

“If you were an independent hospital, you didn’t have a lot of leverage,” Pace said. “And in the game of getting reimbursements from insurance companies, it’s definitely size versus size.”

Moyer said the changes in how hospitals are paid for their care has only sped up over the past 10 years.

Gates said this had also forced many of the other remaining independent hospitals in the state to join larger systems in the several years prior to RMH’s merger with Sentara.

Sentara RMH has won a raft of awards over recent years. In late April, it was named to the top 100 hospital list by Fortune and IBM Watson Health.

However, the hospital has also seen many longtime providers leave over the same period, roiling patients. The departed providers told the Daily News-Record that local leadership has created poor working conditions for medical providers and presented unfair pay offerings.

Longtime RMH physician Dr. Andrew Blay had concerns about the merger a decade ago even after leaving to start Cooks Creek Clinic in 2002.

“I was just telling everyone the hospital I knew and loved for the last 42 years was not the same and the merger was not likely to improve it,” he said.

But Blay said he felt like the hospital and health care was losing its “heart” even before the merger.

“Harrisonburg, Virginia, isn’t the only one that’s being a victim of medicine becoming a business,” he said. “And I think it’s probably wrong to try and target Sentara out of the mass of Sentaras out there and say ‘They’re the problem.’ The problem is business has taken over medicine. That’s the problem. There’s no easy solution for that because a lot of people are making a lot of money.”

Before choosing Sentara, the RMH board looked at six different systems for a potential merger, according to Gates.

“We looked at several potential systems to merge with and after a fair amount of due diligence and review, we felt like Sentara matched our needs best,” he said.

Board members toured the former independent Williamsburg Community Hospital, which merged with Sentara years before, according to Pace.

Sentara was “far ahead in terms of using information to improve the outcomes for their patients and we knew that they would make the investments in the software and information systems to bring RMH into the fold so it could benefit from that,” Pace said.

Yuriy Zhukov, medical director of Sentara Cardiothoracic Surgery Specialists, said the hospital has faced difficulties in the past decade.

“We’re not just rolling with punches, we actually did something to update” services, he said. “As much as we’ve had multiple challenges since I got here, from staffing to changes in practice and what we do, but I think the overall game plan is to continue providing the best care.”

Moyer said the hospital plans ahead in three-year cycles, the next one beginning in 2022. The planning process is fluid and always ongoing, he said.

“We look at our programs, our services, our service lines and then we adjust to a very fast-moving health care industry which is changing,” he said.

Moyer said the local board helps steer the ship in the interests of the community and Sentara is able to help accomplish those goals.

The local leadership “is instrumental in driving where those strategic dollars go, what the projects are and how’re they’re spent,” he said. “So it’s great to have that local board and local voice that is integral in terms of how our strategic planning is done and how the dollars are spent to meet the community needs and that has been consistent over the entire time of our relationship.”

In the time that we've endured the SentaraRMH merger, morale has plummeted and doctors are leaving instead of bowing to pressure to join the new medical groups at lower pay. Certain staffers feign interest in your well-being and Doctors of Osteopathy, willing to accept lower pay, are staffing the ER. You are not informed

in advance, of the cost of procedures Then you get a whopping bill, which, when challenged, takes months to straighten out. People who are admitted are at risk from incompetence and poor training and mediocre skill sets possessed by technicians and caregivers who "graduated" from MTC. Bottom line? Your road to recovery at RMH can be hit-or-miss. People have died at RMH due to incompetence, and my wife nearly died from incompetence. As a former Navy Corpsman, I've decided to ask any rescue squad to take me to UVA. They may refuse. If so, I'll pay the bill to be transported to a place where the ER Doctors graduated from medical school.