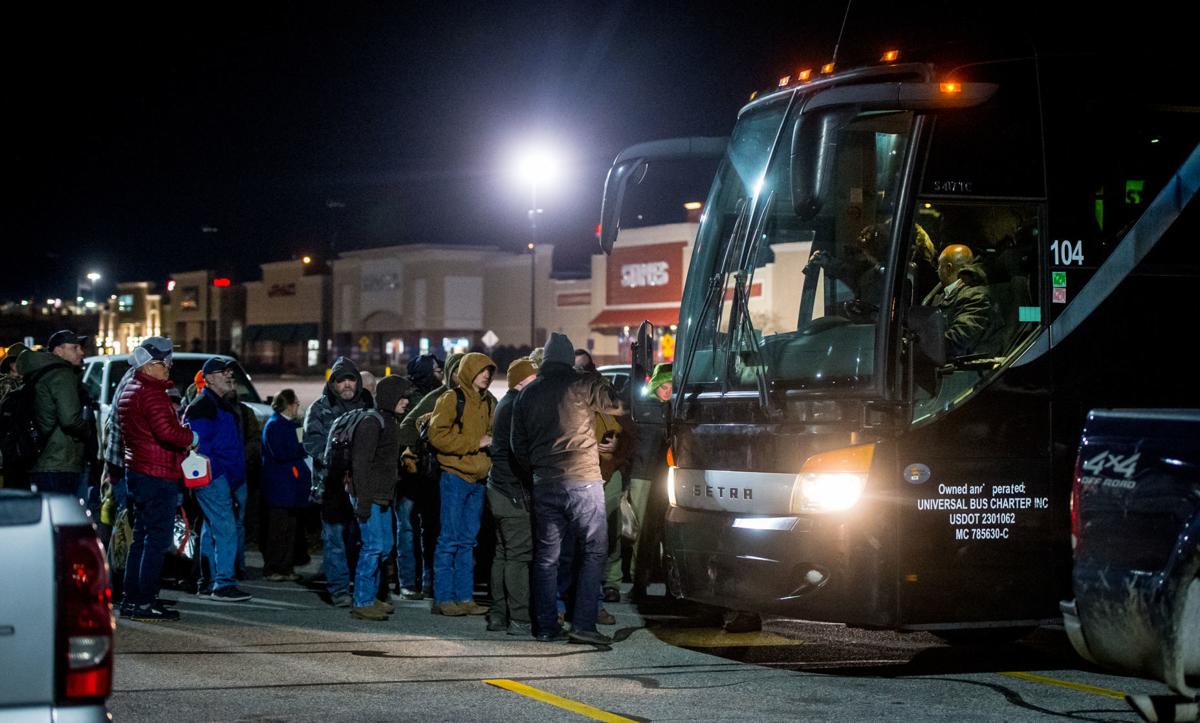 Area residents line up to board buses at Harrisonburg Crossing early Monday morning to travel to Richmond for a large pro-gun rally against proposed state gun laws. 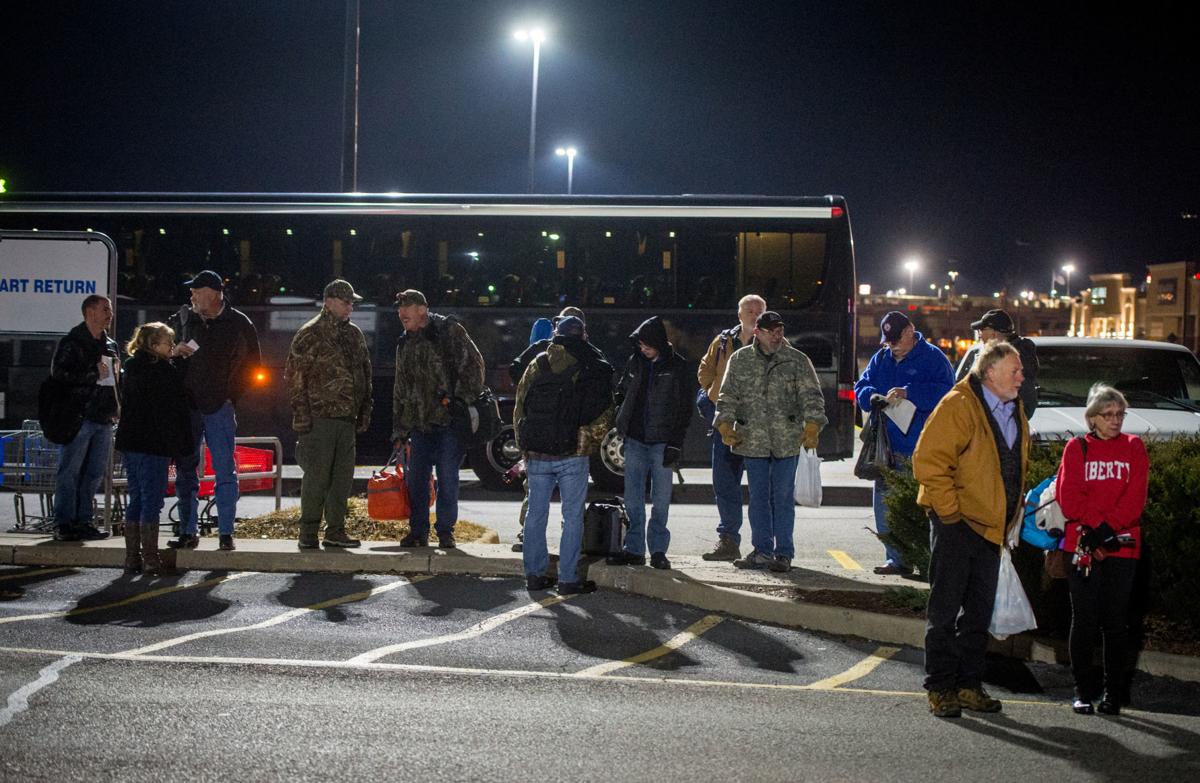 ABOVE, BELOW: About 100 people from the Valley took buses to Richmond to participate in the rally. The Virginia Citizens Defense League, which organized the rally, provided the bus service. 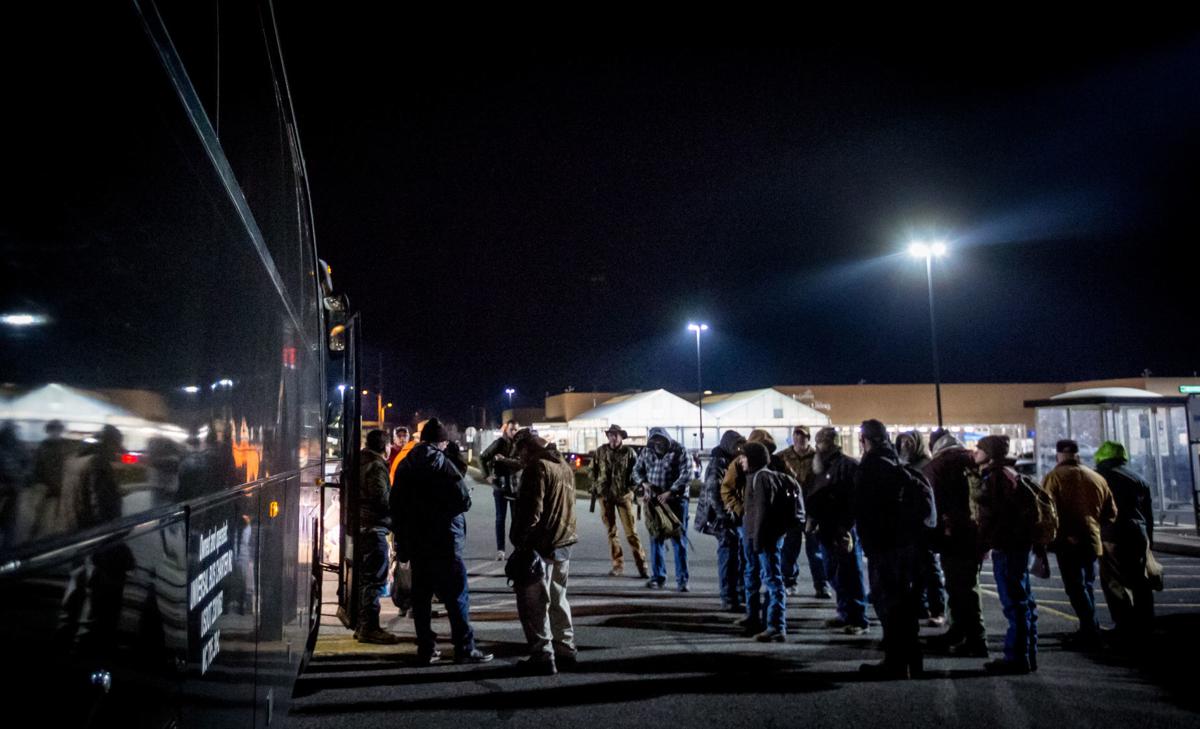 Area residents line up to board buses at Harrisonburg Crossing early Monday morning to travel to Richmond for a large gun-rights rally against proposed state gun laws.

Area residents line up to board buses at Harrisonburg Crossing early Monday morning to travel to Richmond for a large pro-gun rally against proposed state gun laws.

ABOVE, BELOW: About 100 people from the Valley took buses to Richmond to participate in the rally. The Virginia Citizens Defense League, which organized the rally, provided the bus service.

Area residents line up to board buses at Harrisonburg Crossing early Monday morning to travel to Richmond for a large gun-rights rally against proposed state gun laws.

Residents from across Rockingham County and Harrisonburg gathered together early Monday morning to voice their support for the Second Amendment and attend the Virginia Citizens Defense League’s annual Lobby Day and Second Amendment Rally in Richmond.

More than 60 people joined residents from New Market and Woodstock to hitch a ride to Richmond with the help of VCDL-sponsored charter buses from the Shenandoah Valley.

By 5 a.m., two buses carrying more than 100 people left the Harrisonburg Walmart off Burgess Road for the two-hour drive with a final destination of the Capitol.

Jason Breeden, of Elkton, never attended Lobby Day before Monday and said the decision to attend was to be “another body and hopefully make our voices heard.”

“I feel like this is the first time that there is a real danger of our Second Amendment being infringed upon,” Breeden said.

VDCL is a nonprofit organization dedicated to advancing the fundamental human right of all Virginians to keep and bear arms as guaranteed by the Second Amendment, according to its website. The group has held its Lobby Day on Jan. 20 for several years, but due to proposed gun legislation, the annual event drew thousands of people from across the United States.

“It’s more important than ever right now, I mean, we fight or we are going to loss the most important rights that we have.” pic.twitter.com/evPPRh8Rir

“I really don’t think they understand how guns even work,” Breeden said. “Their definition of certain guns is not accurate and I think if they had a better understanding of our side of things, they would come to a compromise. I think any of them that has passed is infringing on our God-given right.”

Breeden said he was an active hunter, saying the importance of the Second Amendment is something he is passionate about.

In response to the expected crowd coming out for Lobby Day, Northam declared a state of emergency from Friday at 5 p.m. to Tuesday at 5 p.m. A press release from Northam stated that law enforcement intelligence analysts had identified credible threats of violence surrounding the event, along with white nationalist rhetoric and plans by out-of-state militia groups to attend.

The declaration prohibited all weapons, including firearms, from Capitol grounds.

A day after Northam’s declaration, the FBI arrested three people in Maryland connected to white supremacist groups who had plans to attend Monday’s Lobby Day and gun rally. The men are facing criminal charges relating to plans of transporting a gun and ammunition across state lines with plans to commit a crime.

Breeden said before leaving for Richmond that he hoped it will be a peaceful rally, but wouldn’t know until he gets there.

Timothy Whitmer, of Elkton, also attended Lobby Day for the first time, saying he doesn’t know what to expect when he arrives in Richmond.

“I have no idea to be honest,” Whitmer said. “Everything has crossed my mind as to what could happen, but I am just hoping and praying today is a peaceful lobby and everybody behaves themselves and we do what we have to do to make it back home safely today.”

Whitmer said he decided to attend Monday’s Lobby Day to support the Second Amendment and because he believed “we have to fight for our rights sometimes and it’s what feels right.”

“It is more important than ever right now,” Whitmer said. “I mean, we fight or we are going to lose the most important rights that we have.”

Whitmer was joined by his son, who made the day even more important due to the generational impact gun legislation could have.

Whitmer said Northam’s decision to declare a state of emergency was “out of control” and “out of line,” adding that the governor is “going above and beyond what he needs to do and I think that we the people are not going to put up with it.”

While the message of the thousands of people attending Lobby Day may be different, Whitmer’s message is clear: We are peaceful people.

“We don’t ask for a whole lot. We just want our amendments,” he said. “We want our God-given rights and we are not going to [lay] down and let a governor like we have now run over top of our rights. We aren’t going to put up with it.”

Jennifer Brown, chair of Virginia’s 6th Congressional District Republican Committee, arrived in Richmond on Sunday night to attend Lobby Day and the rally. She said what made Monday’s event different than years past was “this day is not just about lobbying our legislators regarding gun legislation. This is about making a unified statement against government overreach and total infringement of our Second Amendment.”

“The people have finally had enough of elitist politicians chipping away our rights and we’re showing the Democrats we’re not staying silent anymore,” Brown said.

Brown estimated that there were close to 50,000 people at the Capitol on Monday.

Del. Tony Wilt, R-Broadway, wrote on Facebook that he had not seen a crowd that size during his time in the General Assembly, adding that he was proud to stand with the “tens of thousands of our citizens who have traveled to the Capitol today from every corner of the Commonwealth to peacefully stand in support of the Second Amendment.”

Alleyn Harned, chair of the Harrisonburg Democratic Committee, said there had been a lot of misinformation on the legislative efforts by opponents who acted dishonestly.

“Virginians did not accept our senators’ step to study nothing and do nothing,” Harned said. “Virginians on both sides of the aisle choose to do something. Both Democrats and Republicans voted for background checks on all gun sales. This will be an important step.”

Harned said there are more things that bring Virginians together on the gun rights issue than divide them.

He also said he was concerned with rhetoric from neo-Nazis and was grateful for law enforcement and the FBI for their service.

PHOTO BLOG: Up Early On A Monday

Leading up to Monday's gun-rights rally in Richmond, some friends outside of journalism aske…

WINCHESTER — Stating they have already sworn to uphold and protect the constitution, members…

BERRYVILLE — Add this Clarke County town to the list of localities standing up for gun rights.

Coonman Northam pulled nearly half the VSP off the road to "protect" him.

He was made to look quite the fool yesterday.