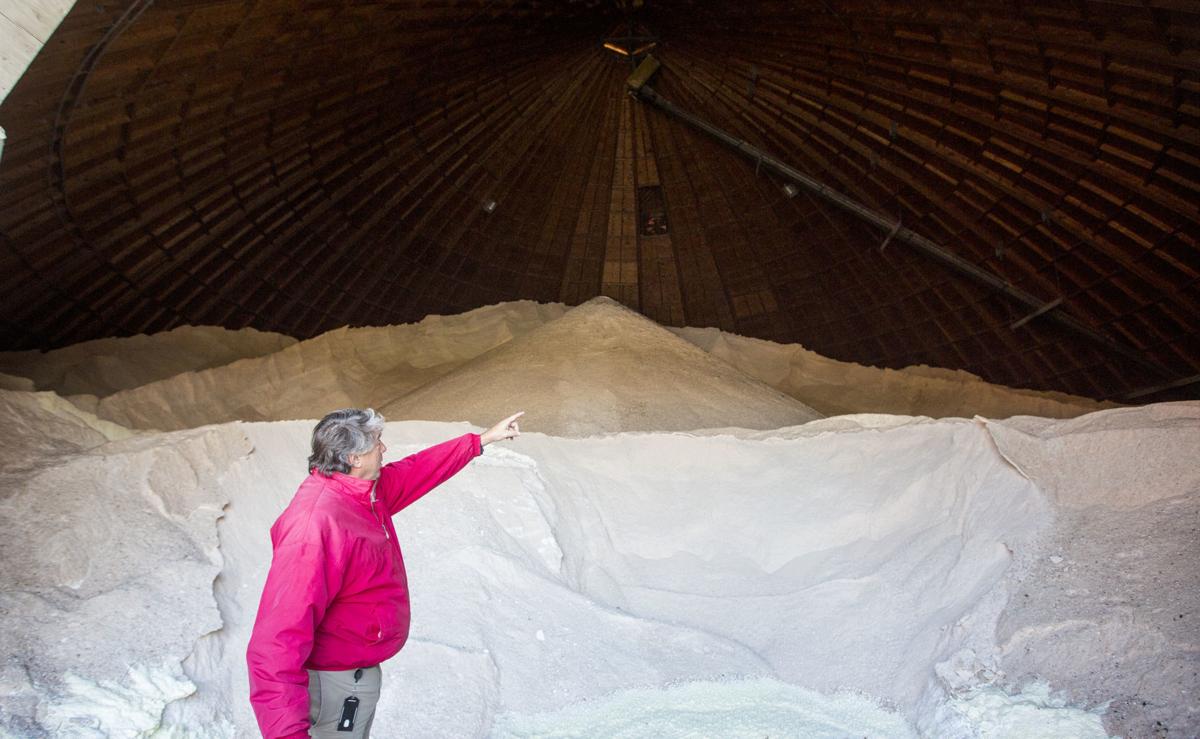 Don Komara, Harrisonburg residency administrator for the Virginia Department of Transportation, points out features in the salt hut during a media tour Tuesday afternoon. 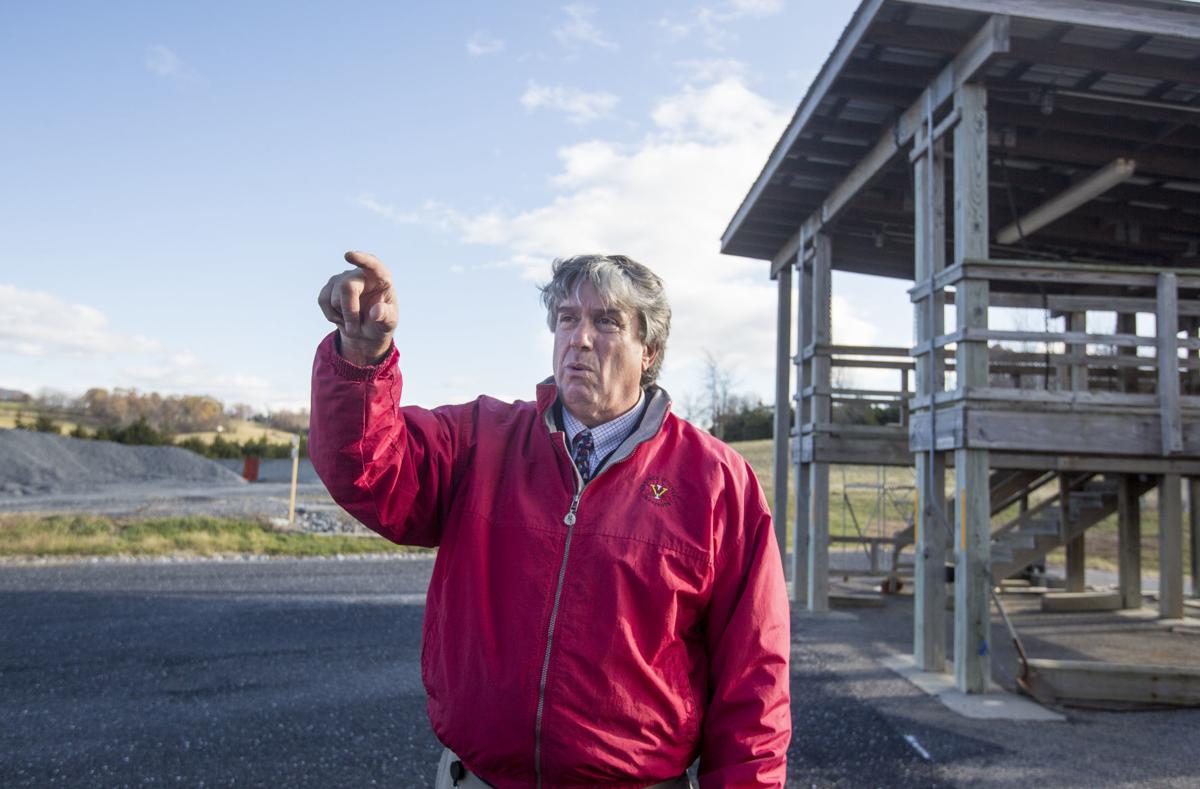 Don Komara, Harrisonburg residency administrator for the Virginia Department of Transportation, gives a tour of the department's facility north of the city Tuesday. 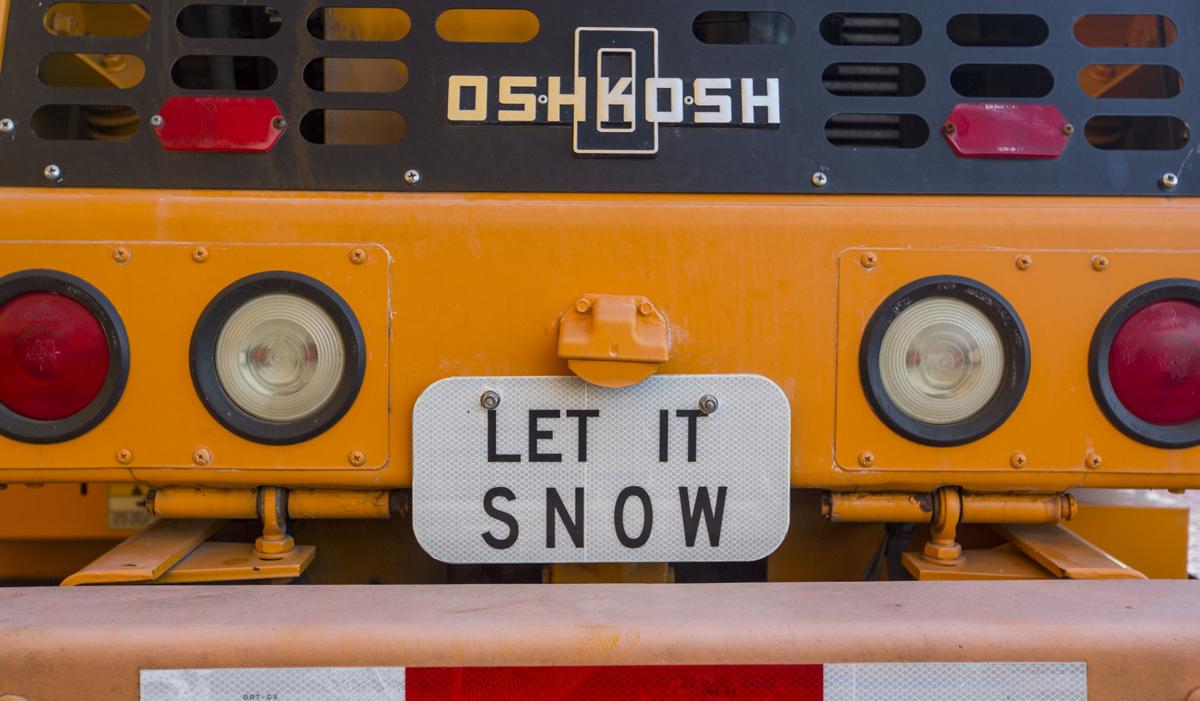 A sign made by Virginia Department of Transportation employees hangs on the back of a VDOT office's snowblower.

Don Komara, Harrisonburg residency administrator for the Virginia Department of Transportation, points out features in the salt hut during a media tour Tuesday afternoon.

Don Komara, Harrisonburg residency administrator for the Virginia Department of Transportation, gives a tour of the department's facility north of the city Tuesday.

A sign made by Virginia Department of Transportation employees hangs on the back of a VDOT office's snowblower.

As the first taste of winter weather fell across the commonwealth Tuesday, the Virginia Department of Transportation's Staunton District highlighted how it's getting ready for what could be a white winter.

In preparation for the season, VDOT has set aside $205 million in its budget for snow-removal activities, with $14 million reserved for the Staunton District. The average cost for a major statewide winter storm affecting all nine VDOT districts is close to $11 million per day, according to VDOT.

Ken Slack, VDOT communications specialist, said the budget for the district was an average from the last several years.

“It's difficult to budget,” Slack said.

“That is why we have reserves for that,” Slack said.

VDOT has more than 12,100 pieces of snow-removal equipment and more than 2,500 crew members statewide. To keep the Valley moving, the Staunton District is equipped with 715 pieces of state and contracted equipment, as well as 226 additional pieces of interstate equipment.

A nontraditional piece of equipment that is being used more often is tractors, with Komara saying more farmers are wanting to help push snow.

“They have been a real big addition to our snow fleet,” Komara said.

Komara and Slack noted that once white stripes appear on roadways, travelers should be aware that winter weather is in the forecast and roads are being treated accordingly.

“We study [the weather] very hard and deploy people a lot of the time when they are looking at the stars,” Komara said. “We look at three to four weather sources. … It really is the best we got.”

Snow removal priority starts with interstates and then goes to primary and secondary roads. One of VDOT’s most asked questions is why some streets get plowed before others. “Many subdivisions have more than one snowplow assigned to clear their streets. If the plow you see doesn’t get to your street, it means another one has been assigned to your part of the neighborhood and will be along soon," according to information in a packet distributed at Tuesday's event.

Another commonly asked question is why VDOT does not put salt on roads before it snows, with the reason being salt can easily be blown off the pavement.

“Salt is most effective after the snow has accumulated about an inch and the temperature is 27 degrees or higher,” the information packet said. “Under these conditions, the salt and snow will mix, melting the snow into a slush that can be plowed off the pavement.”

VDOT’s clearance goals vary depending on the amount of snow, but snow-removal crews work around the clock, with crews preparing for rush-hour traffic at 4 a.m.

“People need to understand that we will get to those secondary roads,” Komara said. “The best time to shovel is after trucks move snow, and you should always shovel to the right.”

Komara said that when roads are being treated, drivers should give plenty of distance to the trucks. He also added that people needing to travel should drive over cat litter to add traction to tires.