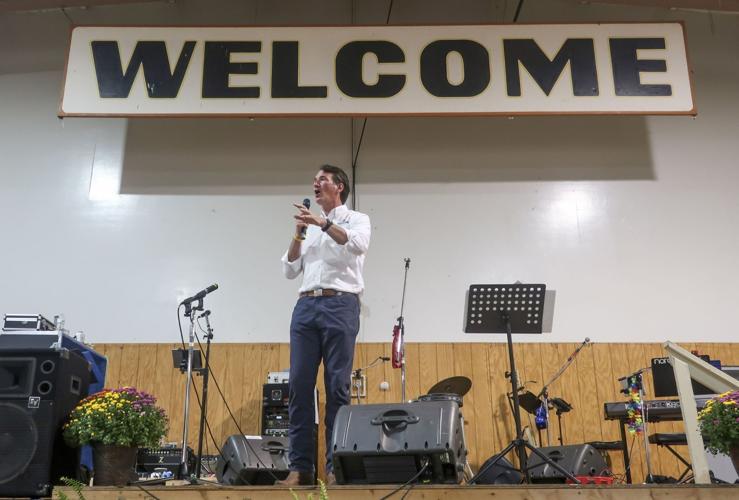 Republican nominee for governor Glenn Youngkin speaks to the crowd at the Oysters with Obenshain event at the Rockingham County Fairgrounds Thursday. 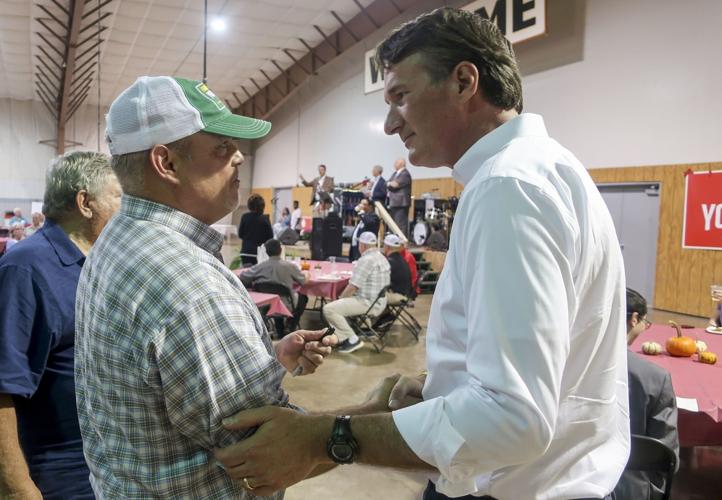 Republican nominee for governor Glenn Youngkin, right, shakes hands with supporter Mark Dotson, a New Market farmer, while U.S. Rep. Ben Cline, R-Botetourt, speaks to the crowd at the Oysters with Obenshain event at the Rockingham County Fairgrounds on Oct. 14. 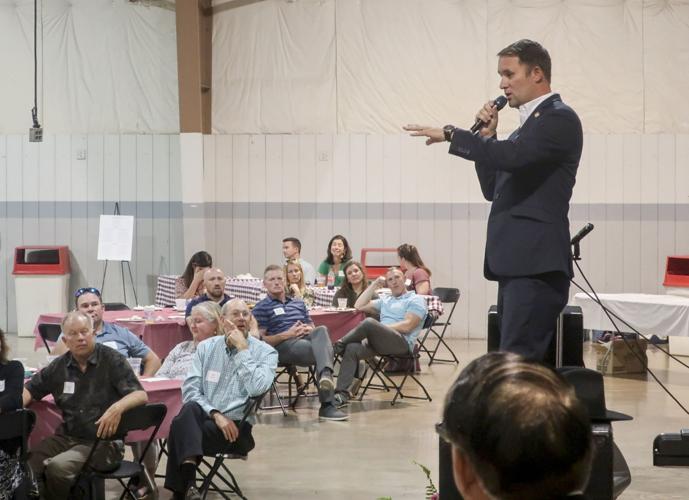 Republican nominee for attorney general Jason Miyares speaks to the crowd of 270 people at the Oysters with Obenshain event at the Rockingham County Fairgrounds Thursday.

Republican nominee for governor Glenn Youngkin speaks to the crowd at the Oysters with Obenshain event at the Rockingham County Fairgrounds Thursday.

Republican nominee for governor Glenn Youngkin, right, shakes hands with supporter Mark Dotson, a New Market farmer, while U.S. Rep. Ben Cline, R-Botetourt, speaks to the crowd at the Oysters with Obenshain event at the Rockingham County Fairgrounds on Oct. 14.

Republican nominee for attorney general Jason Miyares speaks to the crowd of 270 people at the Oysters with Obenshain event at the Rockingham County Fairgrounds Thursday.

It was a who’s who of Republicans — past and current elected officials, nominees, activists and boosters — who sat or stood in the crowd at the Rockingham County Fairgrounds listening to their party’s nominee for governor speak in the Valley yet again Thursday evening.

Dennis Barlow, candidate for District 1 on the Shenandoah County School Board, said it was the fifth time he has seen Glenn Youngkin in the area.

Youngkin has visited the deep-red Valley to publicly meet voters more often than the Democratic nominee, Terry McAuliffe, but that is not surprising when a race is as close as this year’s, said J. Miles Coleman, of University of Virginia Center for Politics.

“Youngkin probably thinks, on a very basic mathematical level, he can get more votes out of the Valley,” Coleman said. “And in an election like this where it’s so close, where both sides feel like they maybe have their backs up against the wall, they’re going to turn out their base voters as much as they can.”

“This is razor thin,” Del. Todd Gilbert, House of Delegates minority leader and Shenandoah County Republican, said during his turn on the stage Thursday.

In years past, voters across the commonwealth more often split their party preference, sometimes resulting in surprising outcomes, such as in both 1985 and 1989, when Virginia voters picked a Democrat for the governor’s mansion one year after delivering the state’s Electoral College votes to the Republican candidate for the White House, Coleman said.

Democrat Doug Wilder became the first Black governor in the nation when he was elected in 1989. He represented a heavily Black part of Richmond in the statehouse but made serious efforts to win voters on the other side of the aisle and state, according to Coleman.

“He famously took his car and went to Appalachia and started shaking people’s hands,” Coleman said.

Wilder won many votes in white Appalachia as a result of his shoe sole-burning approach, which helped carry him to the governor’s mansion, Coleman said.

“Today, it seems like it’s less about that type of persuasion and more about turning out your side,” he said.

Another thing that’s changed is the focuses of campaigns and voters, who the campaigns are crafted to entice and excite, Coleman said.

“You had a lot of those counties, like Buchanan, Wyse, Dickenson, that used to be Democratic. There used to be a decent coal mining presence out there, and it was Democrats that could win those areas on the types of economic issues, being pro-union,” he said.

Those now-staunchly Republican areas were a stronghold for Democrat Mark Warner when he won the governor’s race in 2001, according to Coleman.

“I think the Democratic Party, and the Republican Party as well, have become more driven by social issues,” he said. “I’m sure there’s not much support for abortion out there, for instance, and that’s basically a centerpiece of the McAuliffe campaign.”

Despite the Valley’s Republican reliability, Democrats have carved out enclaves in cities, such as Harrisonburg.

“We have an energized electorate,” said Alleyn Harned, chair of the Harrisonburg Democratic Committee.

He said the energy also comes from support for local candidates, and it is important for the statewide nominees to go to all localities, not just Harrisonburg.

“Are we energized with the few visits? Yes. Are we hopeful for a future and recognize the importance in a state that has 8 million people, talking to all voters and not just the 50,000 people in Harrisonburg? Yes,” Harned said.

He agreed that the closeness of the election called for motivating loyal Democratic voters to make sure they fill out a ballot.

“It is accurate to say that [McAuliffe] needs to fire up his base and that includes his rural Virginia base and that’s why he’s been out here with us,” Harned said.

The city has four Democrats on City Council and one independent who barely defeated a Democrat for the seat in last year’s election.

Coleman said the city and James Madison University are growing, and other demographic changes outside the Valley could one day bring it to more prominence as a battleground.

“At least for now, it’s just a pretty Republican part of the state,” Coleman said.

As we watch other states descend into anarchy. The one thing that precedes this is the installation of crooked dumokkkrats. Vote republican or watch your state become another disaster!.