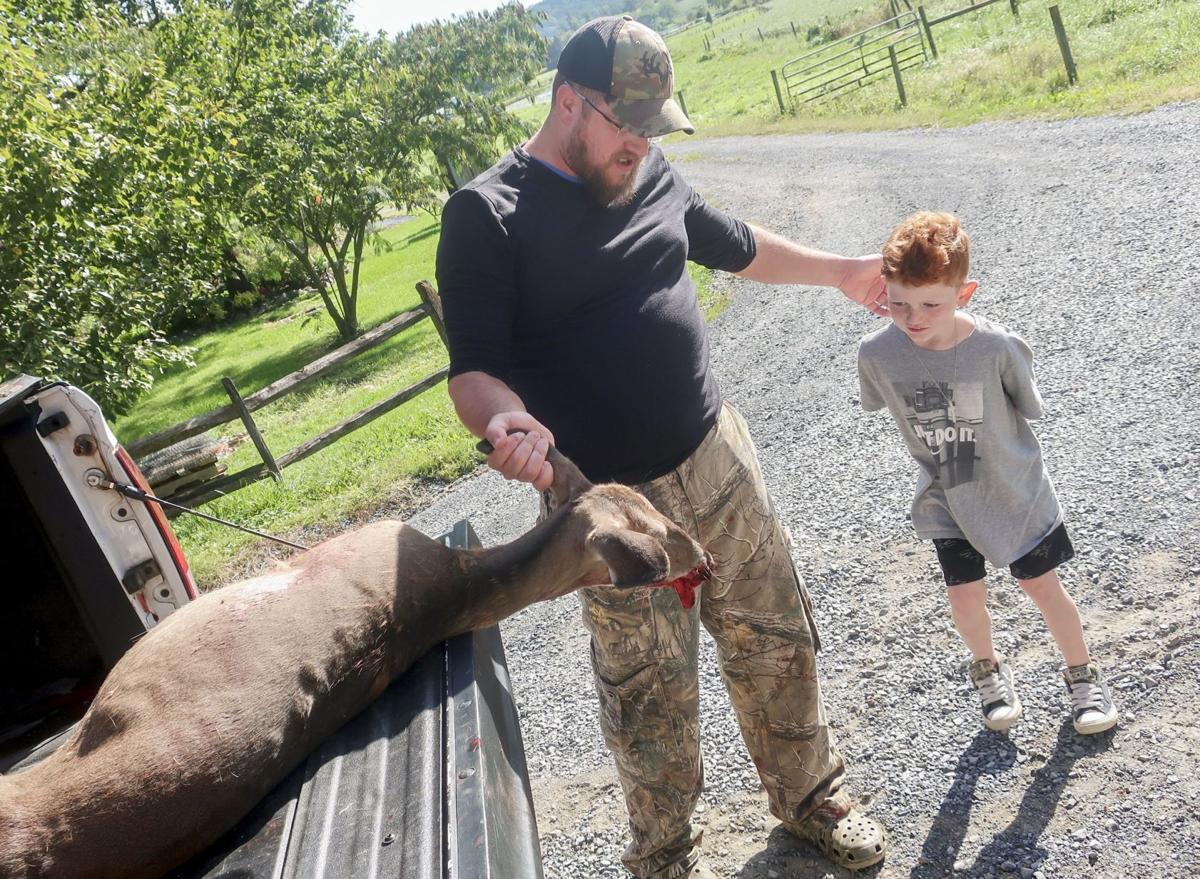 Dennis Jerrells of Grottoes and his son Bryce, 6, unload Bryce's first deer for processing at Redbanks Custom Cuts in Ottobine on Saturday after shooting it earlier that morning in western Virginia. 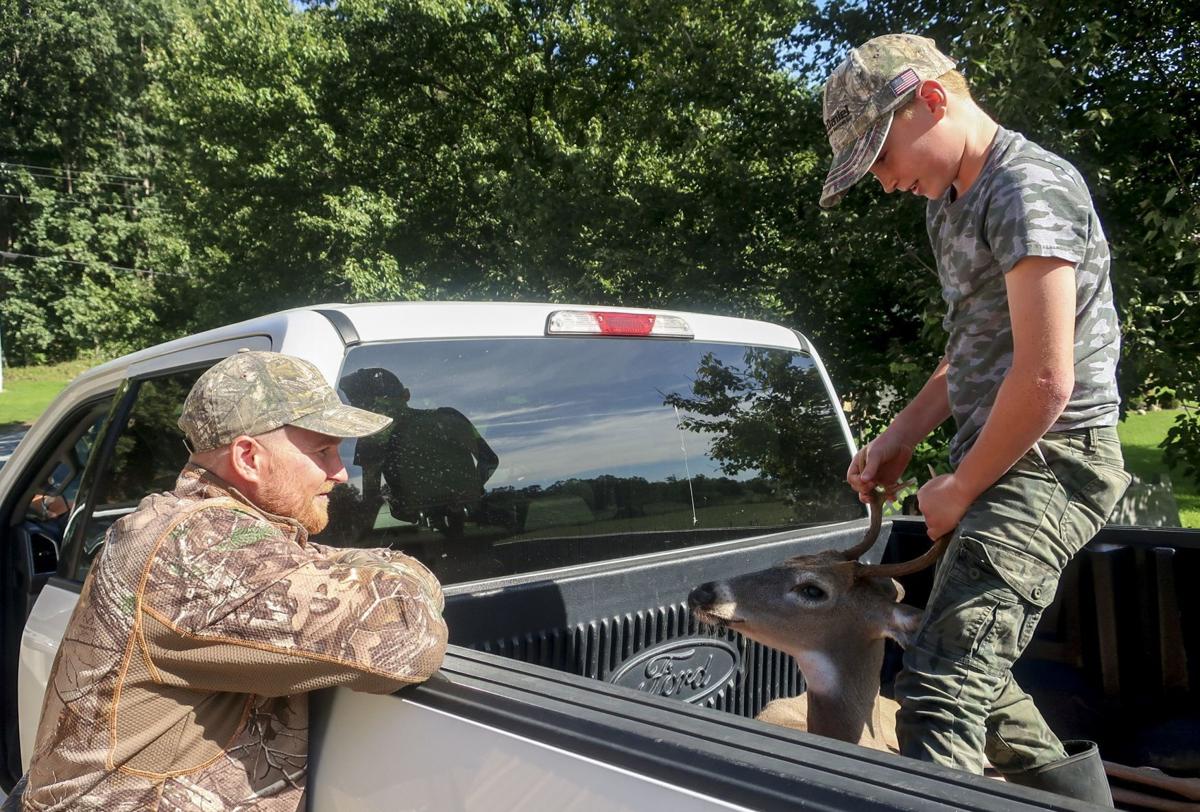 Jason Airey, left, and his son, Cash, 9, talk about Cash's four-point buck he shot on Youth Day Saturday before unloading it for processing at Redbanks Custom Cuts in Ottobine that morning. 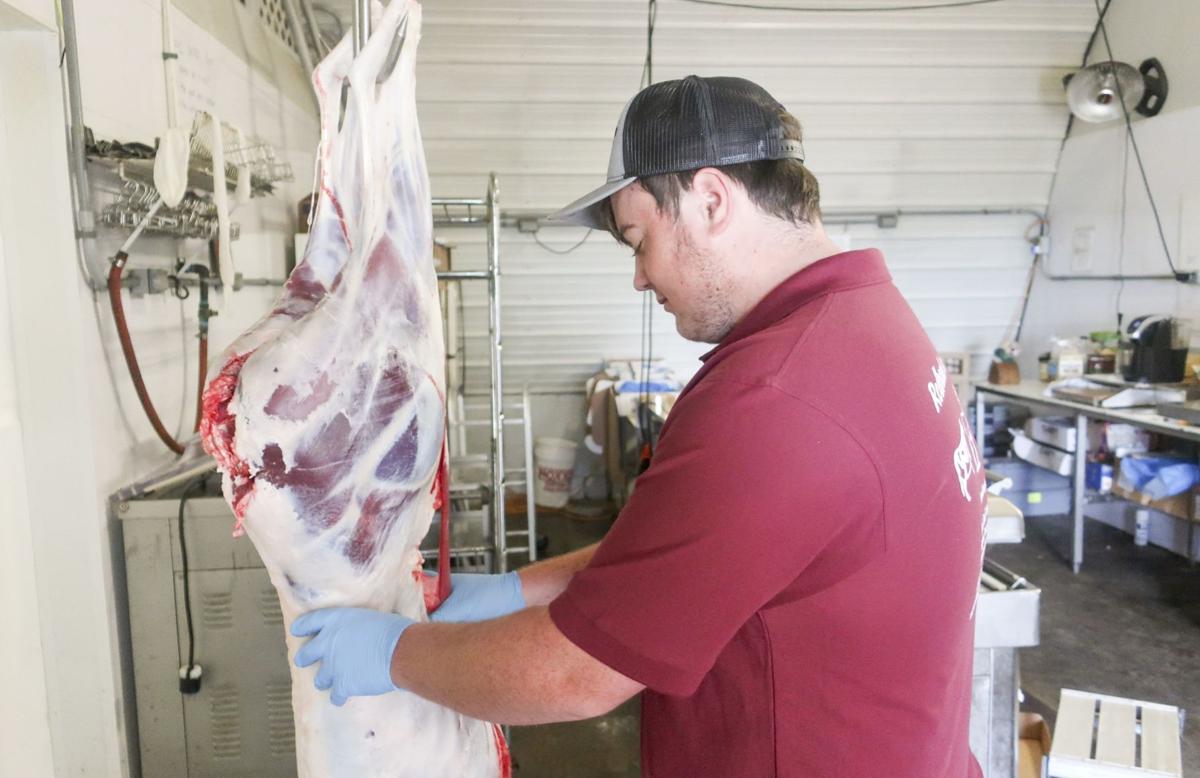 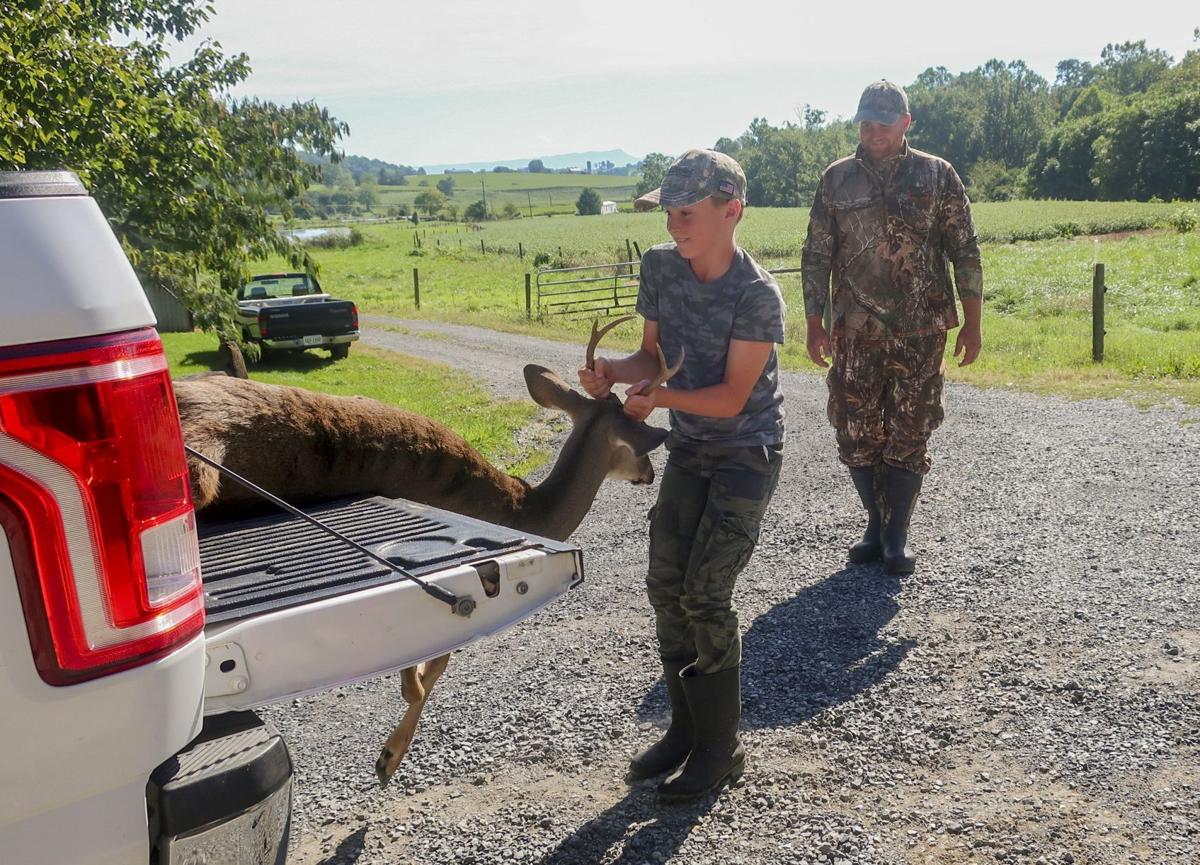 Cash Airey, 9, of Dayton insisted on pulling his four-point buck out of the back of his father Jason’s truck by himself on Saturday morning.

Dennis Jerrells of Grottoes and his son Bryce, 6, unload Bryce's first deer for processing at Redbanks Custom Cuts in Ottobine on Saturday after shooting it earlier that morning in western Virginia.

Jason Airey, left, and his son, Cash, 9, talk about Cash's four-point buck he shot on Youth Day Saturday before unloading it for processing at Redbanks Custom Cuts in Ottobine that morning.

Cash Airey, 9, of Dayton insisted on pulling his four-point buck out of the back of his father Jason’s truck by himself on Saturday morning.

OTTOBINE — It was the day 6-year-old Bryce Jerrells of Grottoes had been waiting years for — his first day out hunting.

On Saturday, his father Dennis, 35, took him out on his first hunting trip, where Bryce, like his brother before him, bagged his first deer on the first day of Youth and Apprentice Deer Hunting Weekend. The event marks the beginning of the hunting season, which helps keep the deer population under control.

Bryce was so excited he had mistakenly set a timer to go off in five hours when he went to bed instead of an alarm for 5 a.m., Dennis Jerrells said.

Bryce said his favorite part of the hunt was actually hitting the deer.

“He actually seen the deer before I did,” Jerrells said.

After Bryce and his father loaded it into the pickup, they headed home so Bryce could get a bath before bringing the deer out to be processed and then going to get breakfast as a family.

Over the years, Bryce has ridden with his father in hunting land.

Bryce’s 16-year-old brother Caleb accompanied their father, Bryce and their mother, Candace, to drop off the deer at Redbanks Custom Cuts in Ottobine for processing Saturday morning.

“I like that he likes [hunting] a lot. He’s been excited about it for the last two years,” Caleb said. “It’s the only thing he asked for for Christmas — hunting clothes.”

“We were nervous when we pulled the [hunting clothes] out that they would still fit him,” Candace said with a laugh.

Caleb said he remembers when his dad took him out for his first hunt roughly five years ago, when he bagged an 11-pointer.

Bryce and Dennis Jerrells weren’t the only father and son duos who bagged a deer Saturday morning and brought it to be processed.

Ottobine native Jason Airey, 38, and his son Cash, 9, of Dayton, got in their tree stand at 6 a.m. and started seeing deer half an hour later.

Cash’s first trip hunting with a gun was last year, though he, like Bryce, has been going out onto hunting grounds for years. Like Bryce, Cash’s first deer was a doe.

The Aireys saw a lot of deer activity, and at 7:30 a.m., Cash decided a four-pointer in the bed of the Ford was worth two in the bush.

“This morning he learned he’s got to be a little bit stiller,” Airey said Saturday next to his truck, and Cash laughed while sitting on the sides of the bed with his four-point buck laying within. “Because we did get busted by a couple deer before we got a shot at this one,” Airey said.

D.J. Byler, 14, and his father, Scott Byler, 60, of Lancaster, Penn., were hunting on family land when D.J. shot a three-point buck Saturday morning.

When they took the deer to Redbanks on Saturday, they learned it could not be processed there without certain parts already removed due to regulations aimed at decreasing the spread of chronic wasting disease. CWD is a neurological disease that attacks deer, elk, reindeer and moose, according to the Centers for Disease Control and Prevention.

At Redbanks, Airey said he remembers the first time he killed a deer on a hunting trip with his sister’s then-boyfriend. His father, a farmer, did not hunt.

“I’d hunted a lot before that with some of my dad’s friends and they’d shot stuff, but I’d never shot any till then,” Airey said. “My dad didn’t take me out like I take [Cash] out.”

His father’s friend Bruce took him hunting over three decades ago.

“I’ve always loved hunting, trapping and fishing, and he’s kind of following in my footsteps,” Airey said said of Cash.

Before going to breakfast with his family, Jerrells said hunting with his children is a chance to bond and share something that matters to him and those who came before him.

“I think it’s a good tradition to pass along to the kids,” Jerrells said. “Stuff like this seems like it keeps on fading away.”

One tradition the Jerrells keep up is butchering their own hogs in the winter, but on Saturday, Bryce turned his first deer over to professionals to turn the raw meat into snack sticks and hot dogs, some of his favorites.

And though eventually the meat from his first deer will be gone, the memories Bryce and Caleb have of hunting with their father will last for years to come.

“Hopefully, one day they can pass it down to their kids,” Jerrells said. “It’s just excitement when stuff like this comes together.”