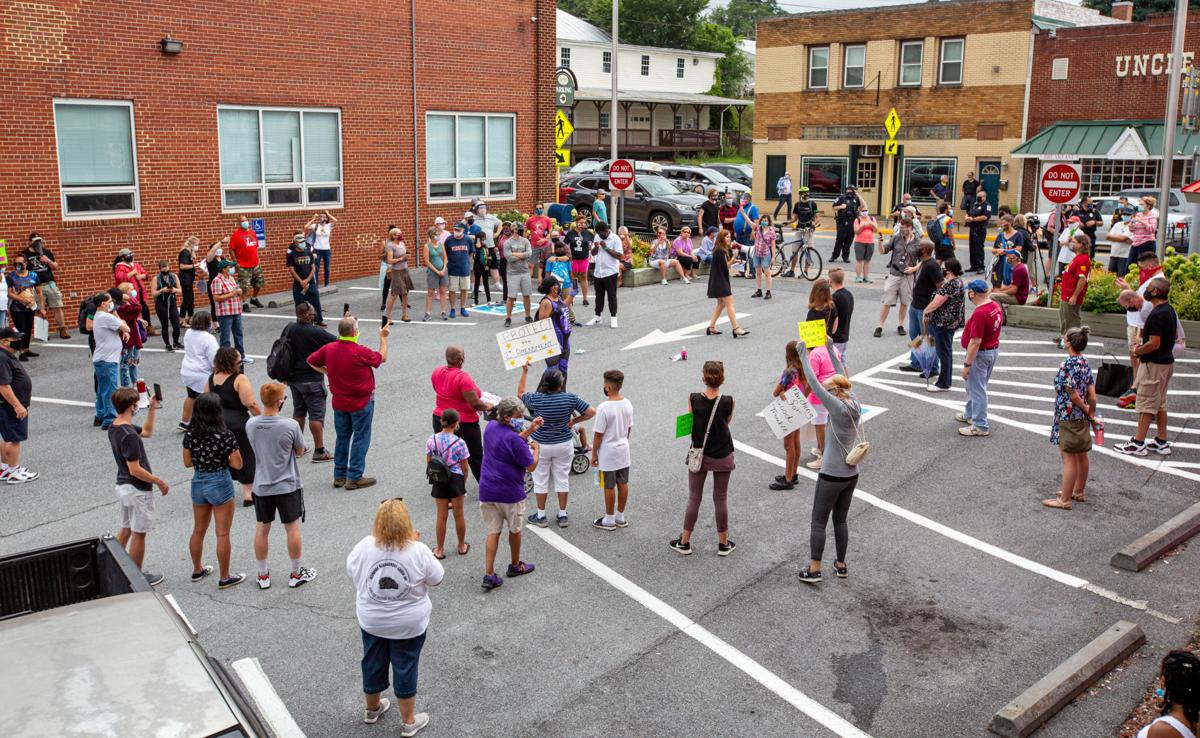 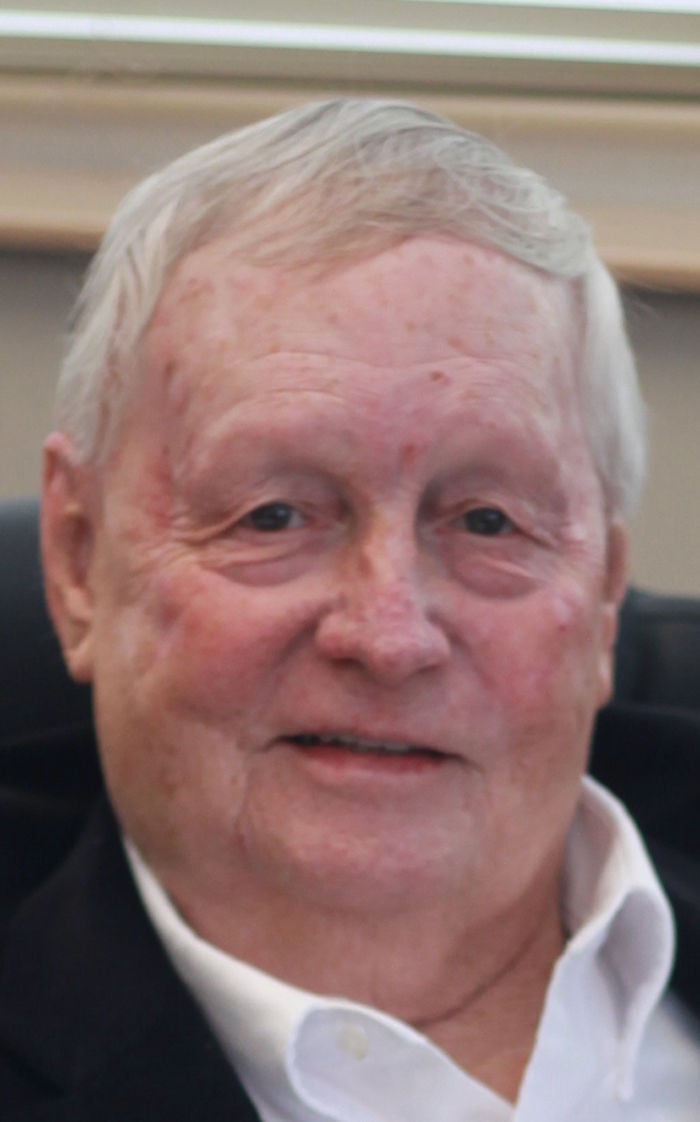 LURAY — Mayor Barry Presgraves was formally reprimanded by his colleagues Monday night following a 90-minute meeting that drew more than 30 speakers, most calling for his resignation.

In a 5-to-1 vote, Luray Town Council voted to censure Presgraves for an Aug. 2 post to his personal Facebook page that read “Joe Biden has just announced Aunt Jemima as his VP pick.”

After some pointed out the racist overtones of his post in the comments section, Presgraves deleted it from his social media account about an hour later, but not before another Facebook user captured and shared a screenshot of it that quickly circulated online.

Presgraves later said his post was also a screenshot he took of one made by another user that he found to be “humorous.” The mayor added that he shared it only in regard to presumptive Democratic presidential nominee Joe Biden and not as a reference to any of the three Black women who The Associated Press reported he was considering as a running mate. On Tuesday, Biden announced he had chosen California Sen. Kamala Harris, who is Black, as his vice president pick.

On Aug. 4, Presgraves said he didn’t understand why the post was interpreted as racist, indicating that he perceived Aunt Jemima as a real-life entrepreneur and “millionaire” whose products he has enjoyed throughout his life.

“I’ve been buying Aunt Jemima for 50 years, and it’s always been a good product,” he said. “I don’t understand why it’s offensive. But that seems like the popular opinion, so I guess they’re right.”

The 130-year-old Quaker Oats brand features a fictional Black woman named Aunt Jemima who was originally dressed as a minstrel character and later depicted wearing a “mammy” kerchief. The image was changed over time in response to growing criticism that it perpetuated a racist stereotype before Quaker announced in June that it would retire the image, saying the company recognizes that “Aunt Jemima’s origins are based on a racial stereotype.”

After drawing ire from council members and calls from residents for his resignation, Presgraves said Aug. 4 that he had no plans to resign.

“Why should I?” he said. “I was elected by the people. I’ve got four-and-a-half months [of my term] left and I’m gonna do my darndest to serve that out. You know, I’ve gotten a lot of calls supporting me, too.”

He took to his personal Facebook page later that day to issue an apology.

“I posted a picture 8-1-20, I am sorry if it hurt anyone’s feelings. Lesson learned. It was not my intent to hurt anyone. I took it to be humorous. SORRY!!!”

At the start of Monday night’s council meeting, the mayor read a different apology.

“The last eight days have been the most difficult time for our community, my family and me,” he read from a prepared statement. “I want to make this very clear to everyone, with absolutely no qualifications. I understand what I posted on social media was wrong, offensive and unbecoming. It does not reflect what is in my heart.

“I also want to make a direct apology to all people of color and women,” he continued. “Passing off demeaning and worn-out racial stereotypes as humor isn’t funny. I now fully understand how hurtful it is, and I can and will do better, and we can all do better. We must. From the bottom of my heart, I am sorry and humbly ask for your forgiveness and your grace.”

For the next 90 minutes, the mayor and council members listened to residents who took to the podium three minutes at a time. Twenty-two signed up to speak, though some when called upon relinquished. An additional 11 comments were submitted electronically prior to the meeting and read by Town Manager Steve Burke.

Due to coronavirus concerns, the meeting at the town office accommodated limited attendance, but those wanting to weigh in were brought in one at a time to present their comments. The meeting was also livestreamed on Facebook and later posted to YouTube.

Luray pastor Audre King was the first to take to the podium.

“I want to say to everyone, it is my belief from talking with the mayor and knowing him and the relationship I have with him that this is not a racist man, nor does he have a racist heart, nor did he intend for his comments to be racist, although in the context, they very much were,” King told the council. “I would speak to the town that says that this is not who we are, in many ways without knowing this is very much who we’ve been. … I believe right now the town of Luray is being publicized throughout the United States and the world for things that many of us have said in our backroom conversations, not meaning any harm, yet causing much.”

King said he was not calling for Presgraves’ resignation, since the 12-year mayor is not running for reelection in November.

Former school administrator and lifelong Luray resident Audrey Tutt Smith, who was one of the first people to comment against Presgraves’ post before it and her comment were deleted from his page, said she had a difficult time accepting his initial apology.

Others defended the mayor and his post. Touting both his and Presgraves’ support of President Donald Trump, Dean Peterson turned the tables on those calling out the mayor’s Facebook post.

“When you ... categorize citizens by the color of their skin, it is racist, and then to assume that everyone who would see that post would think it’s racist is racist within itself,” he said. “I do stand with Mr. Barry Presgraves. … He is obviously a Trump supporter, and I feel an obligation to come forward to point out the violent evils of the left and how they do try to divide us and separate us and cause division and hate within our community.”

Others refuted Peterson’s claim that Luray is “not a racist community” nor “the Top 10 of the problems in this community” by sharing firsthand experiences with racism.

“It’s been on my heart that if I didn’t stand today to say something, I’m gonna be sorry,” said 69-year-old lifelong Luray resident Barbara Veney. “That’s why I’m here — because saying nothing is gonna keep Luray the way I grew up. We [weren’t] allowed 70-some years ago to voice our opinion. You kept quiet. You never said a word. We went on with the program. But today is 2020. It’s got to change.”

Luray resident Penny Good said that since the mayor’s post, she and others have encountered “Aunt Jemima jokes” by motorists passing through the town’s west end, which is made up in large part by Black residents.

“A lot of us from up on the west end of town were very traumatized by that coming from you,” said Good. “We don’t appreciate that, because that coming from a person of your stature enables others when they see that and it’s been represented on Facebook, to think that way, to speak that way and to have the audacity to come up on the west side and act that way.”

Luray native Melvin Tutt told the council that after retiring from the military in 2011, he moved back to his hometown with his wife.

“It wasn’t a month of being here that I was called the n-word,” Tutt said. While in the car one day with his wife, he continued, he observed what he thought was a domestic dispute. When Tutt stopped to offer help to a woman and her infant child, he was met with the use of the racial slur.

“My wife turned to me and said, ‘You brought me here to this?’

In a 5-to-1 vote, with Pence dissenting, the Town Council approved a formal statement of censure after reconvening in open session Monday night.

“The Luray Town Council hereby adopts this formal censure of Mayor Barry Presgraves for his choice of harmful words posted on social media,” Burke read. “While the town council affirms the freedom of speech guaranteed by the U.S. Constitution, as elected officials we are held to a higher standard within our communities. Statements by public officials have a powerful impact on the community. We have listened carefully to and reflected deeply upon the public comments shared with the town during the past week. Your apology is a step towards reconciliation with our citizens, however, damage both internal and external to our community remains. This statement of censure focuses on the action. The town council expects your highest level of commitment and dedication to serving all Citizens of Luray as we move forward, without regard to race, sex or any other characteristics. We recognize that words alone will not advance this cause or any other. We are dedicated to working in a transparent manner to build public trust and town governance and move our great town forward during this time of healing.”