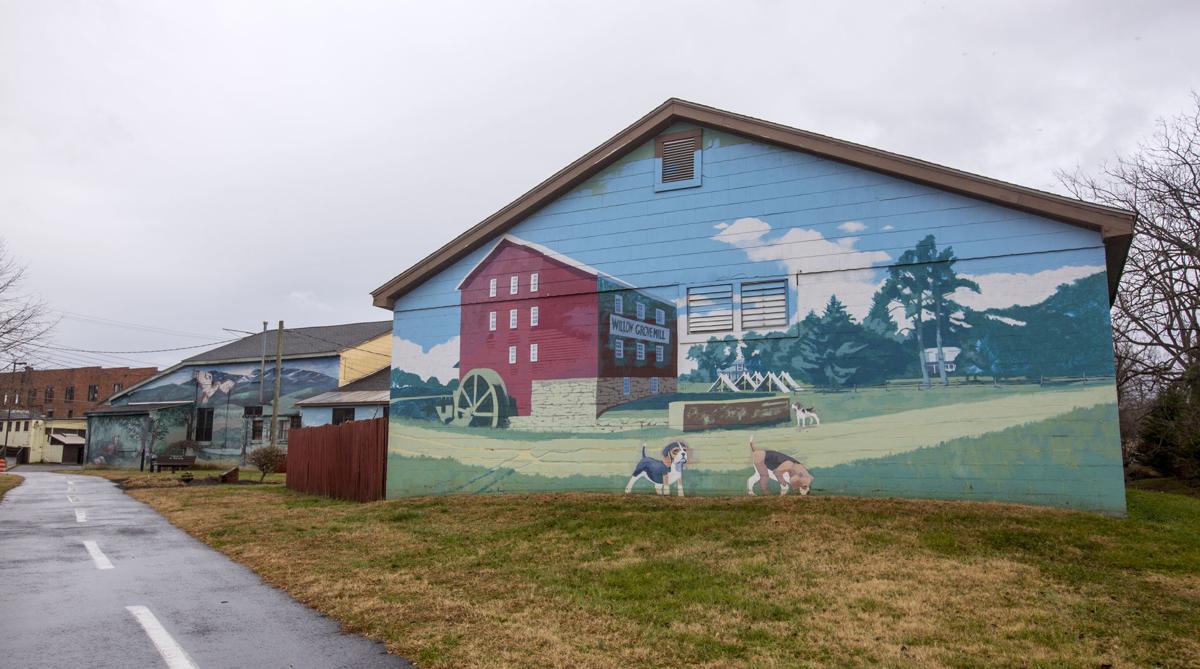 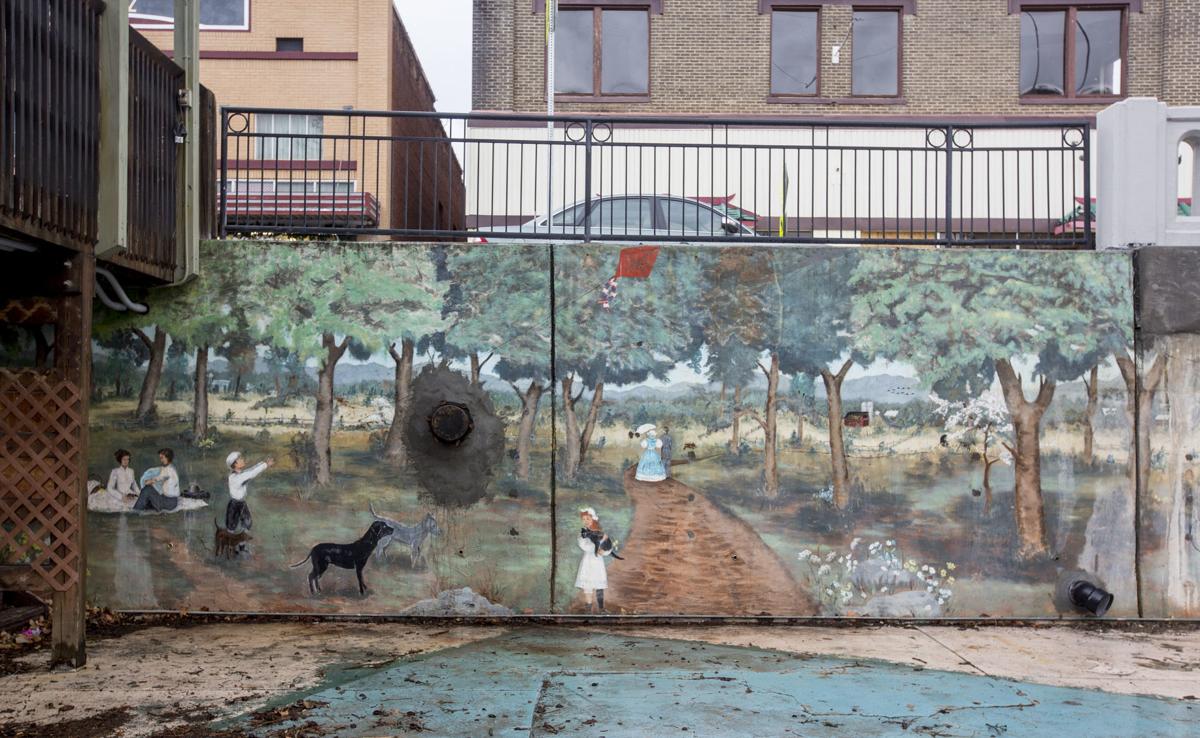 Beneath the town’s streets, a mural graces a retaining wall at Ruffner Plaza along the Hawksbill Greenway in Luray. 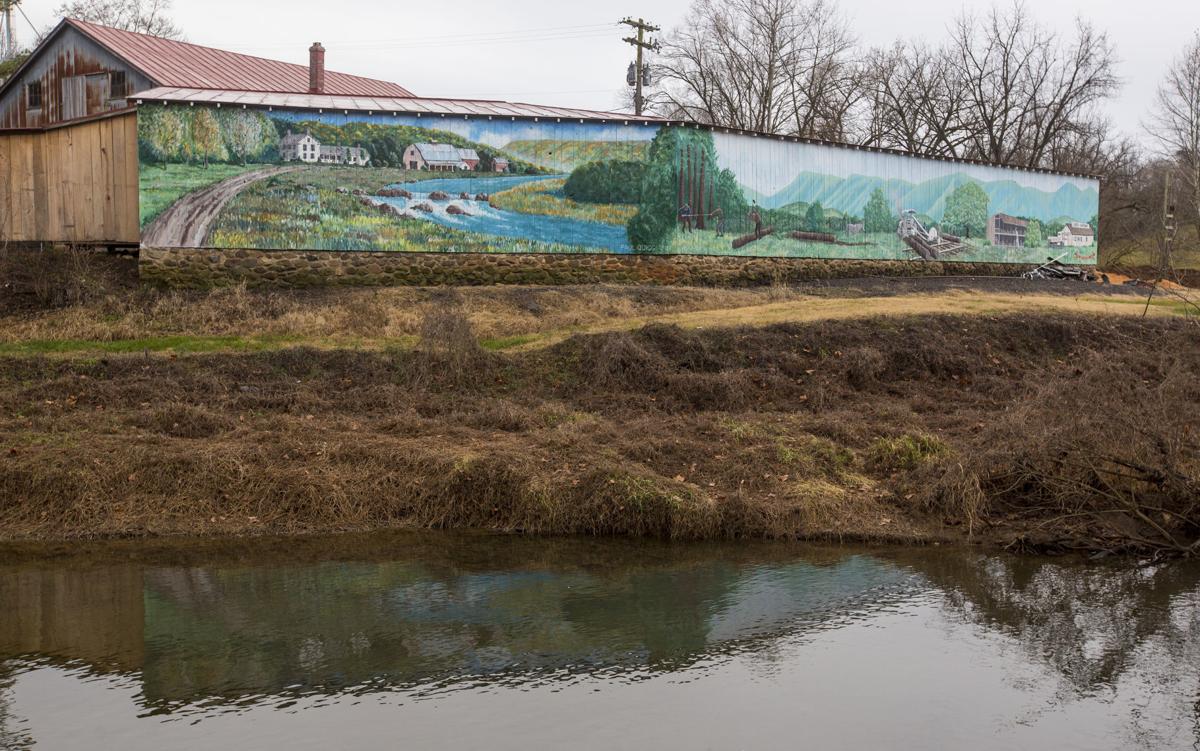 A mural looks over Hawksbill Creek south of downtown Luray.

Marge Yandow and Snickers, left, and Leona Gray and Patches walk along the Hawksbill Greenway in Luray.

Beneath the town’s streets, a mural graces a retaining wall at Ruffner Plaza along the Hawksbill Greenway in Luray.

A mural looks over Hawksbill Creek south of downtown Luray.

Stretching over 2,000 miles, the Appalachian Trail has enticed outdoor explorers to flock to the woods for as long as the trees have stretched their branches to the clouds. For those looking to explore the deep-rooted history and rich colors of the Valley beyond the pine greens and muddy browns, artists are recreating Mother Nature’s gallery in murals just off the trails.

Reaching from Dillsboro, N.C., to Front Royal, the Appalachian Mural Trail is a collection of large scale artworks in towns adjacent to the Blue Ridge Mountains that reflect the community’s values and indigenous natural elements.

“We felt like there’s so much talent in many, many different ways throughout the mountains. That needed to be celebrated and cherished with the world, and that’s the work we do,” said Doreyl Ammons Cain, director of Appalachian Mural Trail.

Cain and her sister, Amy Ammons Garza, co-founded the nonprofit, Catch the Spirit of Appalachia, which celebrates the heritage and culture embedded in North Carolina’s mountains. Together, the sisters perform “Heritage Alive!” in which Garza narrates tales of their Scotch-Irish upbringing while Cain breathes life into her words by illustrating a mural alongside her.

“It just became something that I loved to do and felt was very important to do,” Cain said. “The greatest value is public art.”

Cain began the interstate project three years ago and envisions a completed trail tracing from Georgia to New England. Luray’s historic murals along Hawksbill Greenway are the latest addition to the trail.

Pat O’Brien served as the Parks and Recreation director in Luray for 37 years and helped establish the murals alongside the creek and walking trail over a decade ago. As a part of the Tree City USA program, Luray continuously won awards for its innovation and growth, but the program began requiring a committee to collect awards in the early 2000s, according to O’Brien. From there, the Luray Tree and Beautification Committee was formed and with it an idea to spruce up downtown with locally provided art.

“The majority of the murals were painted by the artists for free because they wanted to do it. I think that’s what really inspired us to keep moving forward with it. We originally had no idea there was this artists colony in Luray interested in doing it,” O’Brien said. “It was groups, it was families, it was a lot of different people painting the murals.”

Some featured murals date back to the ‘30s. Janet Scott, originally from Connecticut, was among the first contributing artists to the trail. Her mural design originally aimed to showcase the area’s wildlife, but after the terrorist attacks that struck New York in 2001, she returned to the piece, now called “Nature’s Tribute to 911,” to add a rolling flag draped across the mountain’s peaks.

“A couple times I’d go by there, and I’d see her crying as she worked on it,” O’Brien said.

Luray is neither the first nor the last of the towns in the Shenandoah Valley to join the trail route. Liz Lewis, economic development and tourism coordinator for Page County, pushed for Luray to join the project after it was initially spearheaded in Front Royal. Lewis said the region is renown for its natural treasures, but it also harbors man-made beauties that should be celebrated and exposed to outdoor fanatics.

“Page County has so many murals that speak to that outdoor language. It is a regional effort by communities following [U.S.] 340, starting at Front Royal into Page County and Elkton. Those communities are the touchstones for the murals and hikers along the Appalachian Trail,” Lewis said. “The premise is exposing a different segment of the population, trail hikers, to the murals as well. … It’s neat to reach out to that segment of the population that’s on foot.”

Elkton and Harrisonburg have plans underway to join the trail next year. The main obstacle for interested areas is to dig up each mural’s past — the who, what, when and why behind each piece coming to fruition.

Dozens of murals adorn downtown Harrisonburg from remembering the New Deal inside the courthouse and commemorating an emancipated educator — Lucy F. Simms — on a parking deck, to honoring classic literary works outside the libraries.

Jennifer Bell, tourism manager for Harrisonburg, began collecting data behind the local murals around town a few months ago in preparation of joining the trail. Bell, who moved to the city from Pennsylvania earlier this year, said the colorful murals were among the first things to catch her eye. While some of the murals in Harrisonburg are merely for aesthetics and others are also for historical value, all artworks serve to preserve the cultural values of the city.

Whether the mural trail attracts folks stepping off the rugged nature path or visitors popping through the towns on an excursion, the attraction is designed to offer a unique experience for visitors to get an inside look at the core values of Appalachia.