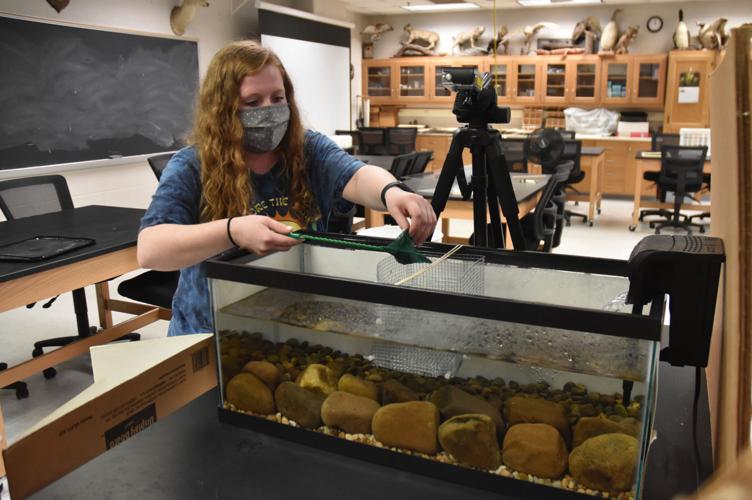 Alison Keister, a rising senior at Bridgewater College, designed this setup to mimic a riverbed. 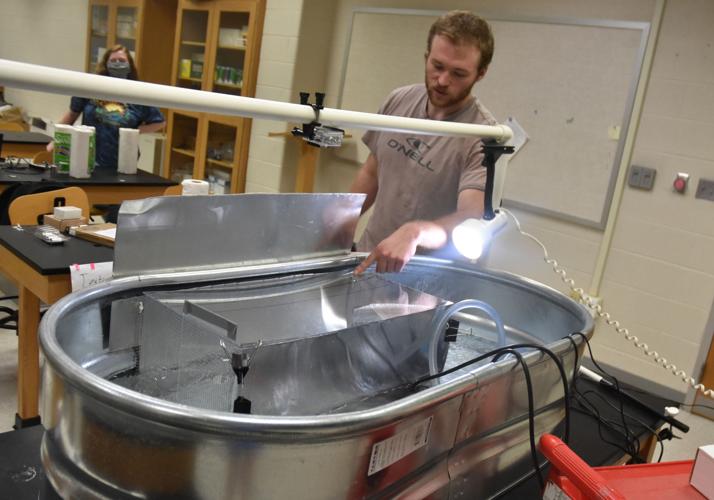 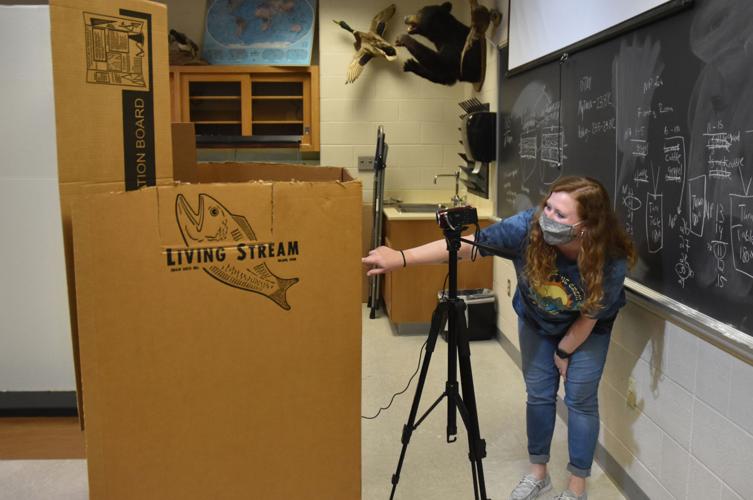 Alison Keister sets up a camera to record a test of longnose dace fish for research at Bridgewater College. 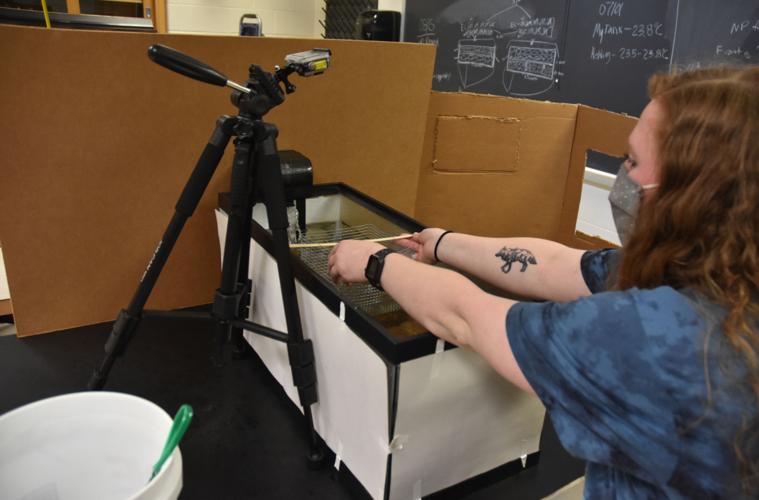 Alison Keister, a student researcher, places is a fish into a tank for testing Monday at Bridgewater College.

Alison Keister, a rising senior at Bridgewater College, designed this setup to mimic a riverbed.

Alison Keister sets up a camera to record a test of longnose dace fish for research at Bridgewater College.

Alison Keister, a student researcher, places is a fish into a tank for testing Monday at Bridgewater College.

Fixing film cameras on a large glass aquarium full of river rocks, Alison Keister, a student researcher at Bridgewater College, might look like the director of a nature documentary.

The star of the underwater show is longnose dace, a small fish that plays a big role in local rivers as an important food source for game fish and other animals, according to faculty adviser Kimberly Bolyard.

Though it might not be prime-time on “Animal Planet,” Keister and classmate Ethan Moses are using nearly 27 hours of footage of a simulated river environment to study how pollution affects the fish through a summer research grant at Bridgewater College.

A healthy longnose dace will seek out an environment of fast-flowing water with lots of big rocks for it to hide in, the researchers said.

While pollution might not have immediate massive effects on the overall population of longnose dace, Bolyard said it could change their behaviors — causing them to move toward environments that are less healthy, like stagnant waters and substrate without hiding spots.

“If you’re busy trying to remove a bunch of toxins from your body then your ability to stay in a fast-flowing water where you might normally be found might be impaired [or] your ability to choose the right substrate,” Bolyard said.

Keister built cardboard “screens” around the tank to make sure the fish didn’t get disrupted during the experiments. No one other than Keister is allowed in the lab during testing to prevent vibrations from movement or sound, which could affect the results of the testing.

After acclimating the fish to their new tank, Keister observed 20 fish she collected from a polluted waterway and 20 from a less polluted waterway, filming and observing each specimen for a half-hour.

“We expect them to go toward that larger cobble. The smaller rocks are there for another option but they shouldn’t necessarily be drawn to it,” Keister said.

At the same time, Moses, a rising junior environmental science major, is testing the two groups of fish to see how they respond to different currents. Using water pumps and a tank he built from a horse trough, Moses is also filming each of the fish and studying their behavior.

Over the course of the fall semester, Moses and Keister will analyze their findings by running the video clips through software that can provide more insight on how the fish behaved.

Once the research is complete, the findings will be presented next spring at ASPIRE: A Celebration of the Arts, Scholarship, Performance, Innovation and Research Excellence, an annual event at BC.

“I was looking at the requirements for a job in environmental science, and I was like, ‘Oh, I did that during research,’ like taking samples, problem-solving, stuff like that,” said Moses, an avid fisherman.

If their hypothesis is true, the researchers will see a difference between how the fish from the clean waterways responded to the experimental tanks and how the fish collected from polluted waterways did.

The findings will be impactful, the researchers said, not only because they will add to the body of research on ecology and pollution, but also because pollution could affect the behavior of other larger animals in similar ways and human activities such as game fishing.

“A lot of the pollutants are from fertilizers. It’s good to have awareness about what management can be done to prevent those things from going into the waterways,” Keister said.