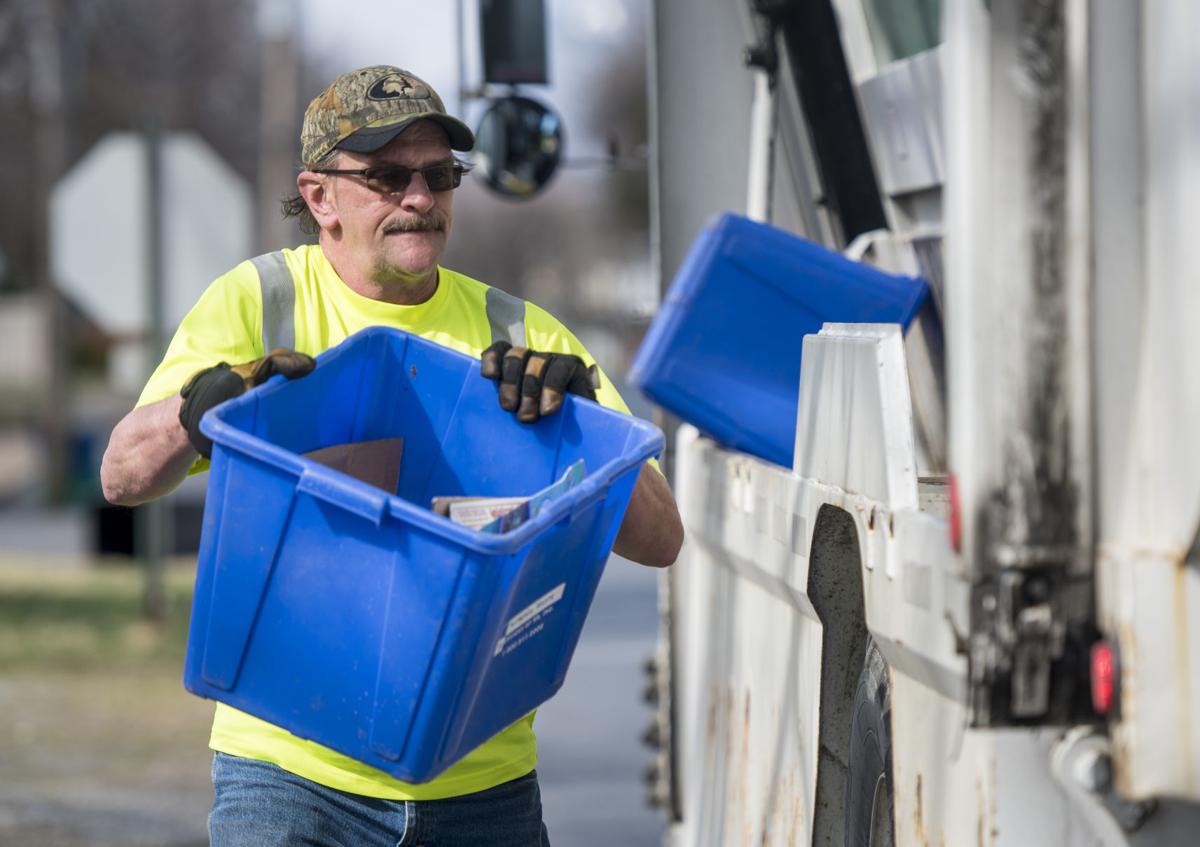 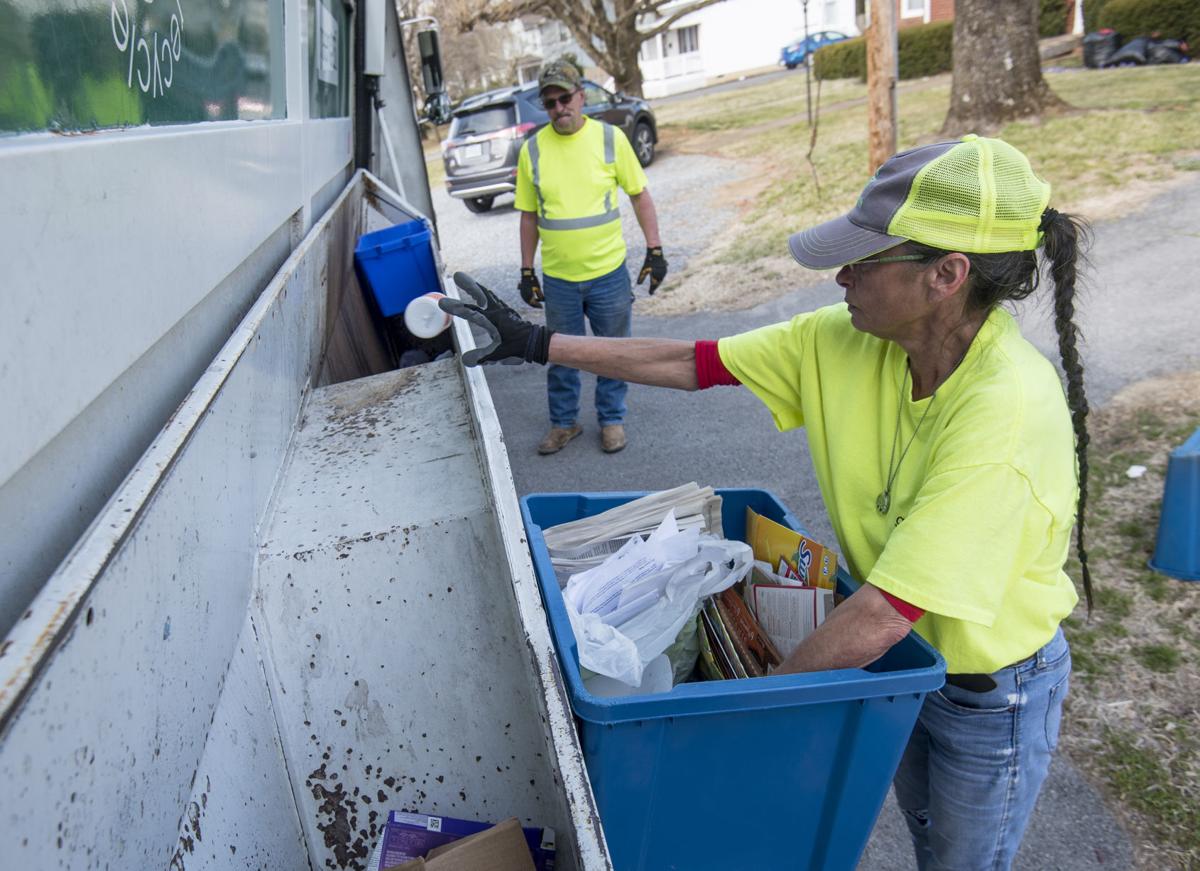 ROCKINGHAM — Most towns in Rockingham County are throwing out the idea of curbside recycling, citing struggles with the recycling companies.

Elkton and Bridgewater are the only two towns left in the county that participate in curbside recycling, but even that could soon change.

Elkton Town Council is expected to vote at its Monday meeting whether to discontinue the service with Green Earth.

Elkton began its contract with the company in August 2001 and currently pays around $47,000 a year for biweekly pickup, according to Mayor Josh Gooden.

Nearly a year and a half ago, the company discontinued glass collection, and when March 1 rolled around, the company also stopped collecting a variety of plastics.

Bridgewater, on the other hand, has no plans to discontinue its curbside service with Green Earth. In a previous interview, the assistant town manager, Bob Holton, said everyone focuses on the local aspect of recycling, but international trends affect the local level heavily.

“China no longer takes outside materials, and they were a big player in recycling,” he said. “And when Europe decided to stop recycling glass, that also had an impact.”

In July, the U.S. Environmental Protection Agency published solid waste and recycling statistics for 2015. Although that was more than three years ago, the numbers are still daunting.

In 2015, of the 262 million tons of municipal solid waste collected, paper and cardboard comprised the largest amount – nearly 26 percent, according to the EPA. Plastics accounted for about 13 percent.

“Initially, it was the cost that made us discontinue it,” said Broadway Town Manager Kyle O’Brien.

Waste Management charged the town $210 per household, whether the household participated in curbside or not.

“Less than 50 percent of the households were participating in recycling, and the company was upping the price 63 percent. So, it was an inevitable decision, but not necessarily permanent,” O’Brien said. “Maybe one day there will be an alternative market, but it’s just not there yet.”

“They weren’t able to get money from the goods that were being recycled so they pulled out,” said Town Treasurer Lee Early. “There’s just no market.”

“When we lost curbside recycling, it was a big thing for the Dayton citizens,” Jackson said. “Since it was discontinued, we have had a lot of citizens coming to council meetings asking what we are going to do and what direction we are headed in.”

Jackson said council has looked into working with Green Earth to come pick up the cardboard at the school or other remote locations.

It would be no additional cost to residents and a $35 monthly fee for the company to pick up the cardboard on a weekly basis.

“We are also looking into paying for expanded plastics and not just cardboard,” Jackson said.

Expanded plastics would include newspaper, No. 2 plastics, aluminum cans, paper board and cardboard.

If the town decides to opt for the second option, it would cost $90 monthly, plus an additional $145 each time the town called Green Earth to dump it.

“The bin would be so big that I don’t think we would have to have it dumped more than four times a year,” Jackson said, adding that it will be on the agenda for the April 9 council meeting.

“As a homeowner that has three kids, we never had a problem with our trash can being full, but now we have to put all of our recycling into the trash can and that adds up quickly,” he said. “When you compound that by town and then the county, that’s a lot more trash going into the landfill.”

Mount Crawford’s curbside recycling company, Waste Management, ended its contract at the end of November. Mount Crawford was spending around $11,000 yearly for the service.

Waste Management stopped its recycling service with Mount Crawford because Sonoco, the company recycling was sent to, stopped accepting it.

Mayor Alfred Cook said that although he is not a die-hard recycler, he believes what does and does not go into the landfill is important.

“Recycling is like everything else — it’s just going through a cycle and it’ll pick back up again,” Cook said. “It’s gotta run its course right now.”

Waste Management also ceased its curbside recycling with Timberville at the end of November.

Sonoco still picks up certain recycling from the county recycling center, such as plastic, because it is already sorted.

Timberville Town Manager Austin Garber said the town only had about 25 percent participation with recycling, so there wasn’t a huge outcry when curbside service was discontinued.

“We are still looking into other potential options available for us to recycle, but right now, using the county recycling site is the only option we know of,” Garber said.