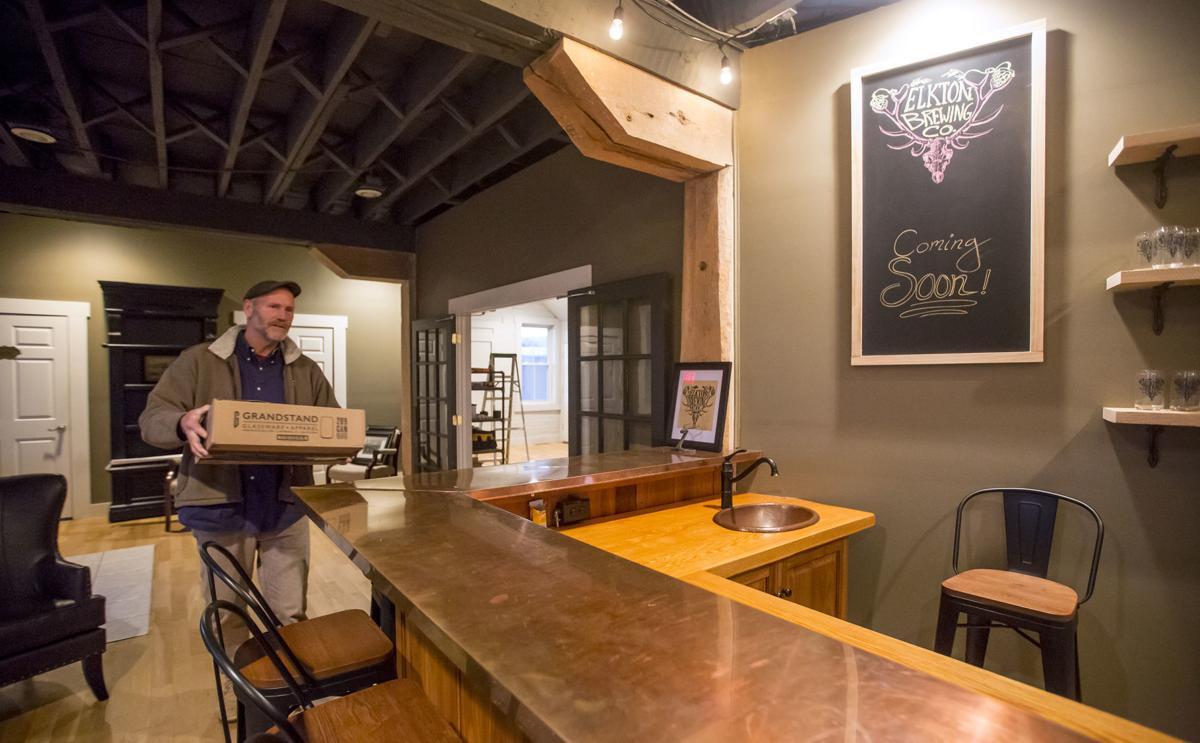 Elkton Brewing Co. owner Steve Napotnik works on setting up a front bar and lounge area of the forthcoming brewery in downtown Elkton on Friday. 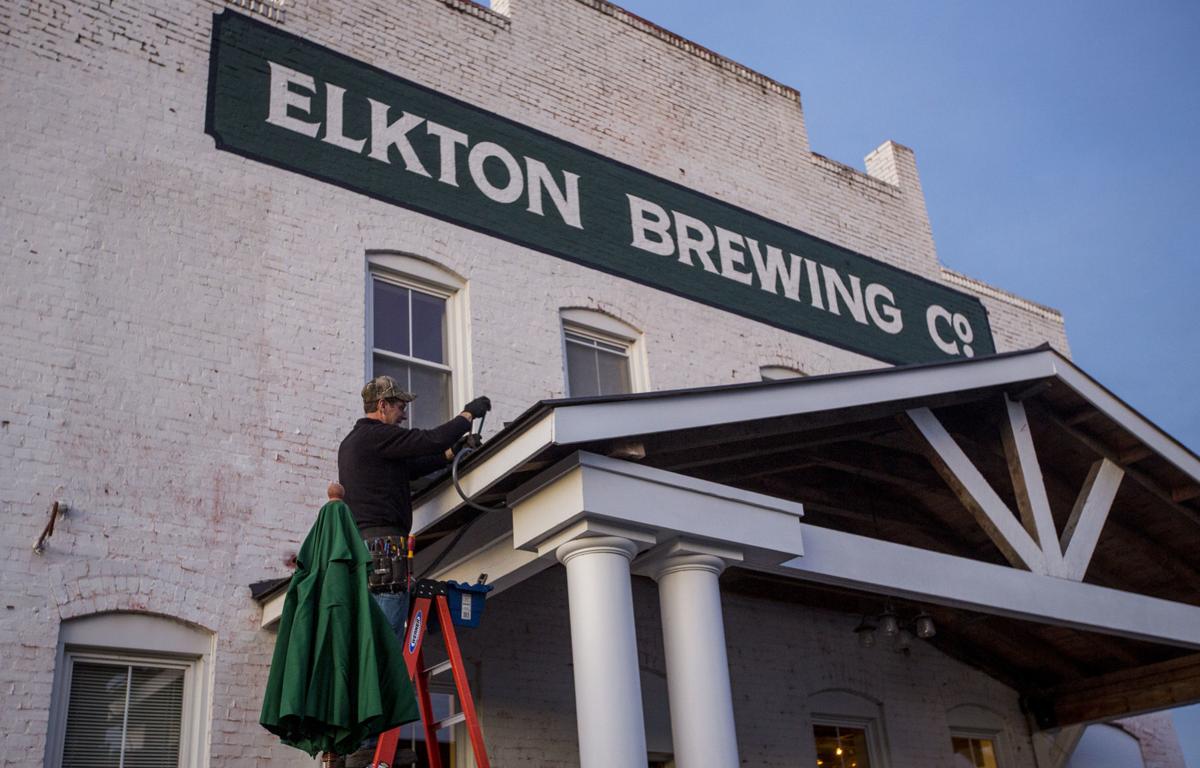 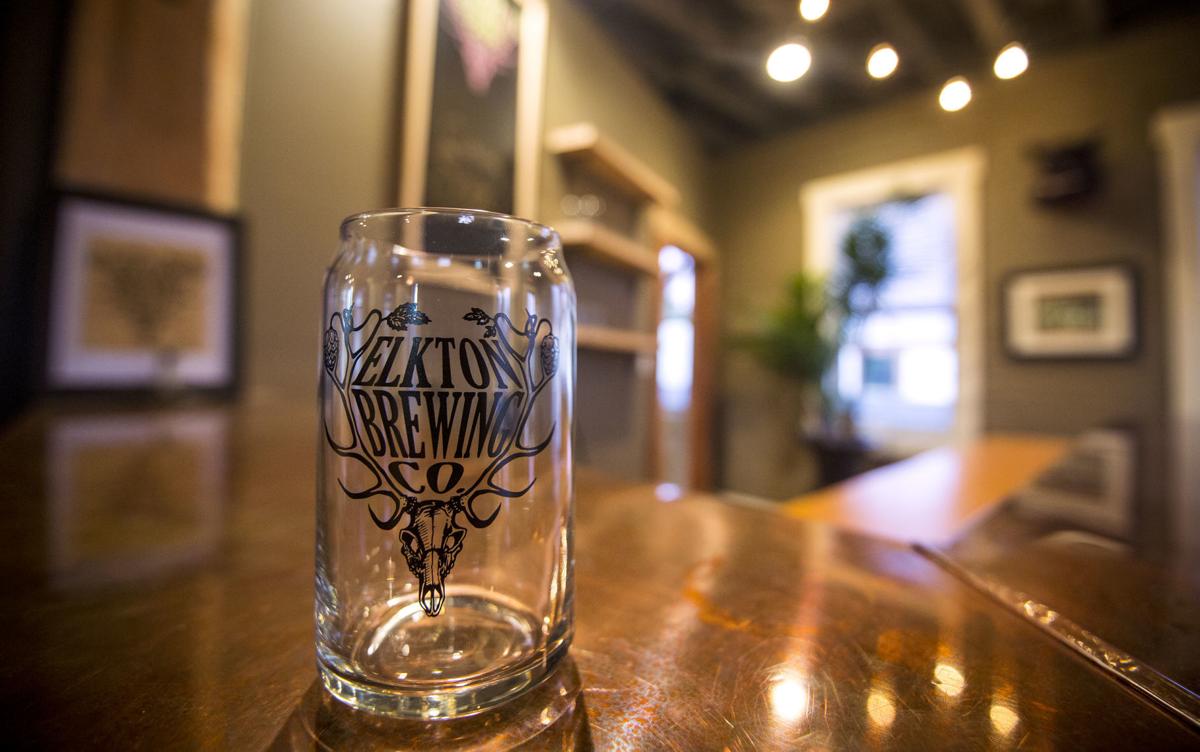 Elkton Brewing Co. owner Steve Napotnik works on setting up a front bar and lounge area of the forthcoming brewery in downtown Elkton on Friday.

ELKTON — It’s a building Steve Napotnik cares about, and inside it will be a business that he can enjoy with his five sons.

Napotnik and his sons, August, Tristan, Aaron, Ivan and Jacob, came up with the idea to start a brewery in Elkton — the first craft brewery in the town.

“We owned the building in the early ‘90s and always thought it would be a great spot for a brewery,” Steve Napotnik said. “Beer is something we all have in common.”

The microbrewery, named Elkton Brewing Co., is expected to open in January or February.

The sons all have a specialty that will make the brewery, located at 100 Fifth St., one of a kind.

August will be the head brewer. He has done homebrewing since 2007, his father said. Aaron will help with the brewing and will be the general manager.

“With his talent and ability, everything came together so well for us,” Napotnik said of August.

Jacob, who used to be a chef at the Local Chop and Grill House in Harrisonburg, will make the bar food.

But the biggest piece of success will come from Ivan.

“His level of involvement will be based on how much he drinks when he comes out here,” Napotnik said.

The sons, who are all about 15 months apart in age, have been working together to make the company a success.

The 10 beers that will be on tap will all be brewed with organic grains, hops and lithia water.

Lithia water is a type of mineral water with lithium salts.

The mash, which is the byproduct of the grains, will be used in agriculture, Napotnik said. The brewery will also sell Kombucha, a fermented drink made with tea.

“We want to source all of our ingredients where we can,” Tristan Napotnik said. “We have an extremely local vision.”

The family wants to distinguish their craft small-batch brewery from other breweries.

“We aren’t going to distribute our beer. We don’t want people to be able to buy a six-pack at a grocery store,” Steve Napotnik said. “If you want our beer, it’s a destination you have to come to in order to get it.”

A selling point of the nearly 130-year-old building is its character, old wood beams and now a black-and-white photo of the first of the Napotnik family to come to the United States from Austria.

The picture shows the family gathered together holding homebrewed beer in their hands.

“I guess this idea was just in our blood,” Steve Napotnik said. “And getting to work with my sons — I just love it. This is something they have so much knowledge and interest in, and it’s really taken off because of them.”

Napotnik has another business, Union Paper Corp., which used to run in the building around 30 years ago. He still runs it with Aaron and Tristan.

The paper company will be back in the building on the third floor.

While the family is finishing up the last few details and food recipes before opening, they decided to bring another piece of the building’s history into the company.

Prior to the brewery taking over the building, it used to be the Church of the Lamb.

In honor of the church, one of the bars will be called the Sanctuary Bar, while the other will be the Stonewall Bar.

“We didn’t want to kick the church out, so when they moved, we jumped at the opportunity to take the building and make it something everyone can enjoy that also keeps its history alive,” Steve Napotnik said.

The Sanctuary Bar will be the larger bar and will have a built-in stage as a music venue. The smaller bar will be for those wanting to hang out and chat.

There will also be a tasting room.

“Our hope is that this space will meet all of the needs for people,” Tristan Napotnik said. “Elkton had the need for this business, and we have already had great feedback from the town.”

The white brick building can be seen from the highway and is in the heart of Elkton.

“Elkton is a great area, and this building just has such a presence,” Tristan Napotnik said. “This space will have a broader appeal and it’ll be a space downtown where people will want to go.”

Mayor Josh Gooden said he has appreciated the Napotniks’ commitment to invest in preserving the historic architecture of downtown Elkton.

“I’m excited to watch the Napotnik family’s business come to fruition,” he said. “Having the brewery in town will provide a meeting space for locals and visitors to gather and enjoy each other’s company as well as the products of Elkton Brewing Co.”

Elkton, which for years has become barren as shops have closed and buildings have been unused, is now booming with business, Gooden said.

“With the opening of Elkton Brewing Co., it further solidifies downtown Elkton as a destination for Valley travelers and residents of the greater Elkton community to shop, eat, drink and experience all that the town has to offer,” Gooden said.

In 2019, there have been around 21 new companies, some of which have not opened yet.

Some of the new businesses include the Elkton Creamery, Heavenly Nails, New to Me Furniture, May’s Attic and Henhouse Shoppe.

“The list is longer than I thought it would be,” Gooden said. “But it is a testament to what Elkton has to offer, and it makes me proud to see people like the Napotnik family come be a part of our growing town.”