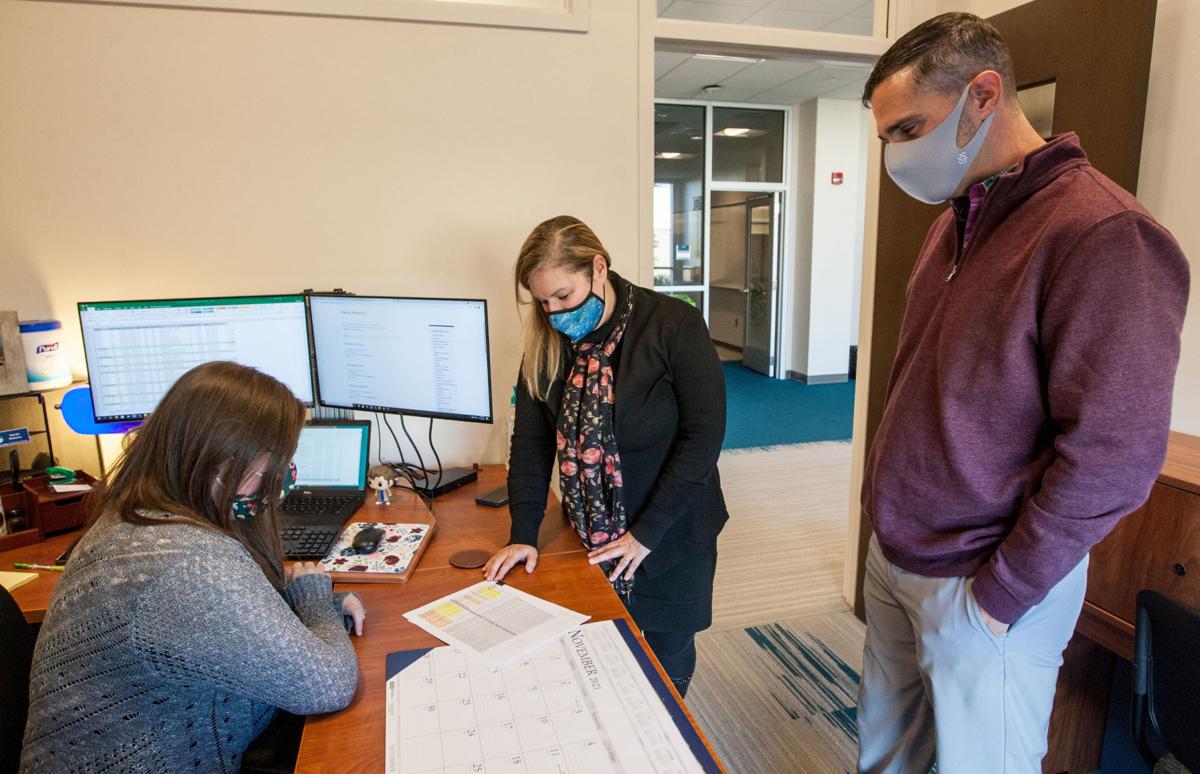 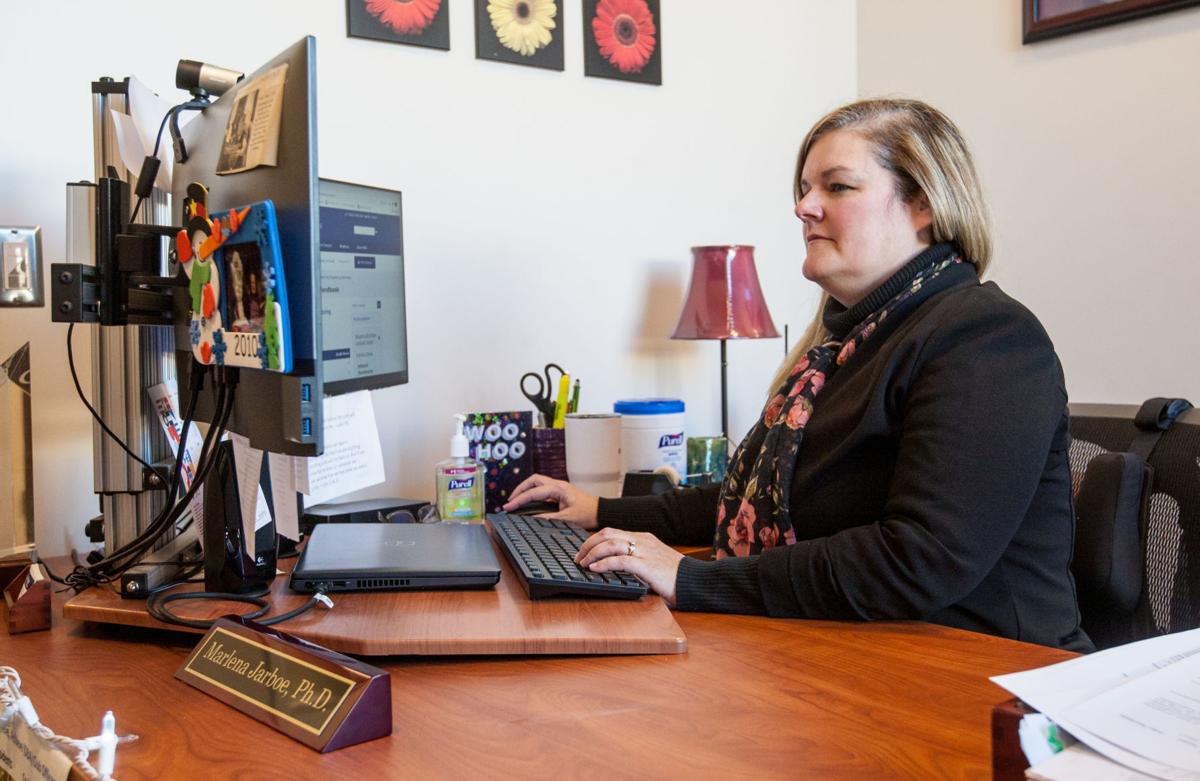 Marlena Jarboe, dean of academic affairs at Blue Ridge Community College, poses for a photo in the lobby of the Biosciences Building.

WEYERS CAVE — No one would blame Marlena Jarboe if the normally pleasant smell of freshly cut grass had the opposite effect.

After her third year at the University of Virginia, Jarboe was dealing with how to pay for her final year of college. Pell Grants had gotten her this far, but that money was gone.

Jarboe had been working since she was 12. She knew her previous jobs were not going to pay enough to get her the money she needed to finish college without going into debt.

Her sister was working at Rocco, now part of Cargill, in Harrisonburg. Jarboe went to them to ask what was available. She was told she was qualified to do landscaping.

“I pushed a mower 40 hours a week for an entire summer,” Jarboe said.

But even now, the smell of freshly cut grass doesn’t bother her, despite the association with manual labor and the stress of trying to figure out how to pay for college.

Perhaps that’s because the opportunity at Rocco opened a door for Jarboe. It paid for her to finish her undergraduate degree in information technology at James Madison University.

Jarboe will be the first to tell you her life has been a series of opportunities presented by those who believed in her. But what she’s less likely to say is that hard work and never giving up is what put her in the way of those opportunities. If opportunities are the posts, hard work is the fencing that held it all together.

Despite being raised in extreme poverty, Jarboe graduated with her undergraduate degree from JMU in 1998. She could have stopped there and been proud to have been one of those success stories — a child breaking the chain of poverty. But, Jarboe is not most people.

Two weeks ago she received her doctorate degree. She is currently a Dean of Academic Affairs at Blue Ridge Community College.

This is her story.

Jarboe was born in Northern Virginia and raised by a single mother, Susan Golladay, in government subsidized housing and on government assistance for most of her life.

She doesn’t have anything against her father, Thomas Pattie, despite the divorce between her parents not being very amicable. Jarboe wouldn’t have both of her parents in the same room until she was an adult with kids of her own.

“I have to give props to my mom, she always worked hard at multiple jobs,” Jarboe said.

Despite her situation, or maybe because of it, Golladay always held her three children to the highest of standards and always told them that one day they would go to college and get out of poverty.

Jarboe began working at the age of 12. In the summers she cleaned at a local gym. At 14 she started working on weekends and full-time in the summer at a hotel and restaurant as a bus girl.

At 15 she was working full-time, going to school and waiting tables at the restaurant. Jarboe wasn’t able to serve alcohol to her customers until she was 16, so the restaurant manager would have to deliver drinks to her tables. At 17 she was asked to work the front desk of the hotel.

“I was terrified at first. I was worried I wouldn’t close out properly, but it worked out and it helped build my confidence,” Jarboe said.

She got accepted to U.Va. where she was pre-med. She still had to work summers to help subsidize her Pell Grants. Jarboe worked at Rocco doing landscaping, but she also worked in the accounting office. One summer she was asked by the chief operating officer to use Microsoft Excel to create a spreadsheet to help with production.

“This is back when email was just being invented,” Jarboe said. “I told them I didn’t know what I was doing. And they said ‘OK, we’ll help you.’”

What resulted was a love for Excel. It worked with how Jarboe’s brain worked and complemented her desire to problem solve.

When it became clear that Jarboe was not destined to become a doctor — like many before and after her, chemistry had gotten the better of her — she decided to transfer to JMU to get her degree in information technology. It was a task that Rocco was happy to help with.

At this point Jarboe was married and starting her family while working at Rocco. She had a daughter, Tori, who was born with Down syndrome and required open heart surgery. When Rocco was sold, Jarboe volunteered to take buyout money in order to pay for her daughter’s medical needs.

“She is such a blessing,” Jarboe said of her daughter. “She makes us better people.”

Jarboe began working at Blue Ridge Community College in 2001 when Tori was 6 months old. She was working at BRCC as a part-time IT professor. But she knew she wouldn’t be able to get the faculty position that she really wanted without a master’s degree.

“I loved it here,” Jarboe said. “It’s such a great family atmosphere and that’s hard to find.”

Despite being burned out after getting her undergraduate degree, Jarboe decided to continue her studies, and graduated from Nova Southern University in 2007. With two children now, Jarboe said this time she was really done with secondary education.

Jarboe was hired full-time at BRCC and a few years later, an interim dean position became available and she was asked to fill the position. She applied and was chosen.

Jarboe saw many women in the field of higher education rising through the ranks and it inspired her. One her mentors was Hara Charlier, who is now the President of Central Lakes College in Minnesota.

“Marlena has always cared deeply about others, about community and about helping people reach their dreams. When we worked together, she was a dynamic and inspiring faculty member,” Charlier said. “Given her focus on transforming lives and commitment to the community college mission, I have no doubt that she continues to be just as inspiring as an administrator.”

Jarboe knew that if she too wanted to one day be an associate vice president, vice president or even president of a college, she would need to get her doctorate degree. Despite swearing off more education, Jarboe felt confident that, thanks to her husband, Spencer Jarboe, and the flexibility and support of BRCC, she would be able to do it.

Dave Urso, dean of academic affairs at BRCC, made it possible for Jarboe to take every Friday off to make sure she could complete her studies.

“Marlena is one of the most authentic people I’ve ever known,” Urso said. “As she’s earned multiple graduate degrees, traversed up the career ladder and raised a wonderful family, she’s kept a commitment to those same core attributes that defined her so many years ago — kindness, selflessness and love.”

Urso said that just as he was a mentor to Jarboe, she is now fulfilling that role for the students of BRCC.

“They see themselves in her and she provides hope. In a time when hope seems to be in limited supply, leaders like Marlena are as critical as ever,” he said.

Along with being passionate about community college, Jarboe also cares deeply about opportunities for single parents to continue their education, which was the topic of her dissertation for her Ph.D. from Old Dominion University. Jarboe is now working with BRCC and other organizations to see what can be done to provide the child care, transportation and other resources needed for single parents to pursue their dreams.

“I was inspired by mom. I saw her try ... but she never earned a degree,” Jarboe said.

“If you work hard that’s all that matters, even if it means pushing a mower 40 hours a week,” she said.

This is a good story, and a good piece of writing. When people are willing to put some blood, sweat, and tears into the training and education, it means more to them.

It’s amazing what can happen when you work hard and stay focused—and do not constantly blame problems encountered on others.

Amen to that Newshound.

It is indeed a good piece of writing. Kudos to Ms. Williams.