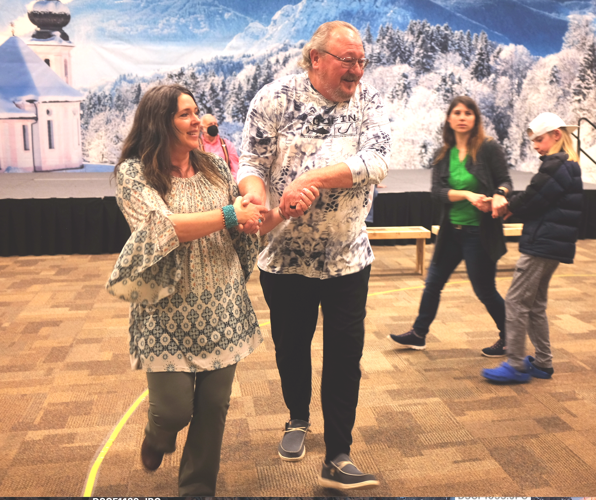 Anita Stroop and Marty Pavlik square dance at a dress rehearsal for “Can’t Feel At Home” on Jan. 19 at Asbury United Methodist Church. 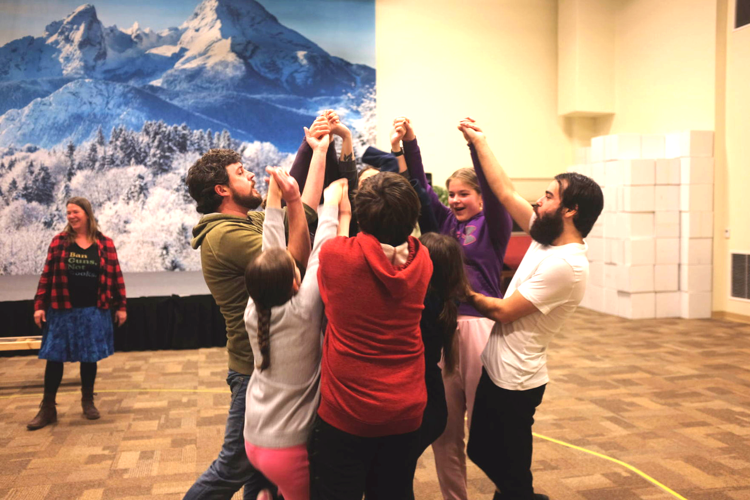 Cast members perform a square dance scene at a dress rehearsal for “Can’t Feel At Home” on Jan. 19 at Asbury United Methodist Church. 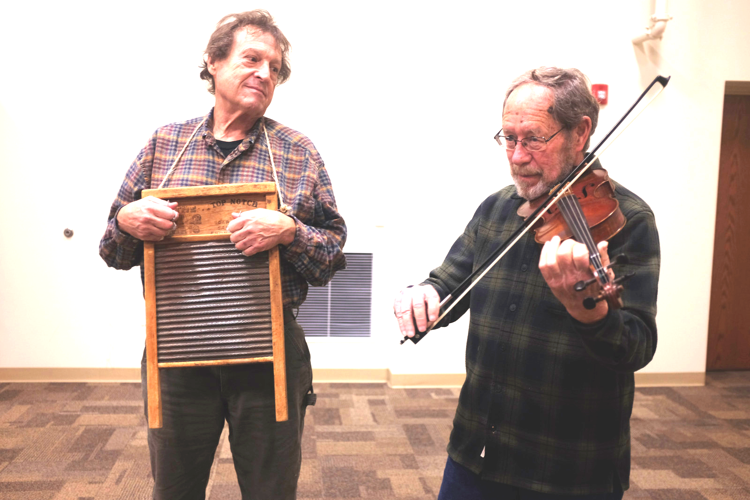 Dr. Steve Phillips plays the washboard and Phil Easley plays the fiddle at a dress rehearsal for “Can’t Feel At Home” on Jan. 19 at Asbury United Methodist Church.

Anita Stroop and Marty Pavlik square dance at a dress rehearsal for “Can’t Feel At Home” on Jan. 19 at Asbury United Methodist Church.

Cast members perform a square dance scene at a dress rehearsal for “Can’t Feel At Home” on Jan. 19 at Asbury United Methodist Church.

Dr. Steve Phillips plays the washboard and Phil Easley plays the fiddle at a dress rehearsal for “Can’t Feel At Home” on Jan. 19 at Asbury United Methodist Church.

There's something special about the production, "Can't Feel at Home," its cast members say.

"Can't Feel at Home" was written by Dr. John Glick, based on the stories he heard from patients in Elkton and Shenandoah about their families and ancestors being displaced from the creation of the Shenandoah National Park in the 1930s. As he listened, he began to write a historical account of those displaced.

"The play is about healing," said co-producer Joe Appleton. "John was a very compassionate person."

Glick, who passed away on Jan. 17 at 70, was known in the community as a healer and a friend. Glick worked as a doctor, an acupuncturist and as half of the comedy singing duo Glick and Phillips. He and Dr. Steve Phillips would perform across the state and had regular performances at the First Night celebration in Harrisonburg.

Although Glick finished writing "Can't Feel at Home" in 1998, it had never been performed publicly. In September, a group of Glick's friends and community members decided to rally around the doctor — who had a long illness and whose condition was worsening — and perform the play.

"It says a lot about John Glick and his reputation, and his work in the community," said Stanley Swartz, the director of "Can't Feel at Home".

Needed to be told

As Swartz, Appleton and co-producer and friend Bobby Wolfe first started to pull together the production, they weren't sure what to expect. Swartz attributed some of the play's rapid success to the buy-in from the cast and community.

"When actors go in with their whole hearts, it makes the words so much more powerful," Swartz said.

What's been the most rewarding, Swartz said, are the relationships that have evolved, and the warmth and success of their endeavor.

Wolfe said they would always keep Glick in the loop with the show's progression while Glick was in rehab. Wolfe said Glick was thrilled that the play would be performed, and always wanted to hear more.

"It was time for the story to be told ... it's a healing play, it needed to be told," Wolfe said.

Appleton said the crew was able to meet Glick and perform two major scenes for him. "It was magic," Appleton said, and Glick was very appreciative of the performance.

When Glick found out there were five more shows, he couldn't believe it, Wolfe said.

Douglas Alan Diehl plays Wren Lamm, a character he described as the patriarch of the Lamm family, and one of the last holdouts in the community as families were forced to leave the mountain. Diehl's daughter, Lily, is also in the play, which got him involved in the show.

"I read the script, and it's such a great part," Douglas Alan Diehl said.

Diehl said he couldn't pass up the opportunity to be a part of something homegrown. He said "Can't Feel at Home" tells a story about how people's lives were impacted before the Shenandoah National Park.

"I think what the most compelling part of the story is that not a lot of people know about this," he said.

Anita Stroop, who plays Ruthie Hensley, said she was inspired to audition as a Valley native and a descendant of a line of the Hensley family.

"I knew of the story, but never really dug into it," she said.

She said the creation of the Shenandoah National Park was a trauma to those on the mountain, whose lives became split and fractured in several ways.

As a friend of Dr. Glick and his family, and a Valley descendant of the mountain, Jackie Hensley, who plays Nell Lamm, said she was honored to be a part of the production.

"If you know John personally, you know what it's like to be completely held in love in his presence," Hensley said.

She said "Can't Feel at Home" continues Glick's legacy of bringing people joy and healing, and it also shows another side of the story from the perspective of those displaced.

While Glick was known for his humor, he was also able to be serious and care for the best for others, said Sandy Parks, who plays the square dance caller in the play. Parks' family was very close with Glick, and she recalled a story where they were all in the hospital for her husband. During his illness, Glick was with the family every step of the way, she said.

The atmosphere was positive, because Parks' daughter was deciding where she wanted to attend college -- a decision between William and Mary, or Hollins University. Glick then turned serious, and asked Parks' daughter, 'What would cause you the least stress?' and Parks recalled her daughter getting a look on her face and deciding to attend Hollins.

"It has been a great honor to come in and do ["Can't Feel at Home"] with people who knew and loved him like I did," Parks said.

13-year-old Gabe Carr, who plays Luther Lamm, said being a part of "Can't Feel at Home" has been a rewarding experience.

"It's a really powerful and interesting story to tell," Carr said.

The story is one with a lot of power and a lot of heart, said Eric Atkins, who plays Cletus Hammer and one of the deputies. Atkins described Cletus as someone who isn't going along with the idea of having to leave the mountain.

The play inspired Atkins to research the story of the Shenandoah National Park more, he said, and he discovered that his ancestors were some of those displaced by the park's creation.

"It made it come home for me ... Dr. Glick wrote such a beautiful play," he said.

Following the January shows, Appleton said there's a possibility that the production may return in the fall. He also said they would like to do something in Elkton, incorporating Glick's vision.

Marty Pavlik, who plays Sheriff Bob Hansborrow, would play music with Glick in Elkton. Pavlik said Glick gave to everybody, and always had a kind word.

He said performing in "Can't Feel at Home" has been an amazing experience, and that he hopes the show gets picked up professionally. It's a story done right, he said, which is an ode to Glick's work.

"To make people not only laugh, but cry in the same show -- what an impact," Pavlik said.