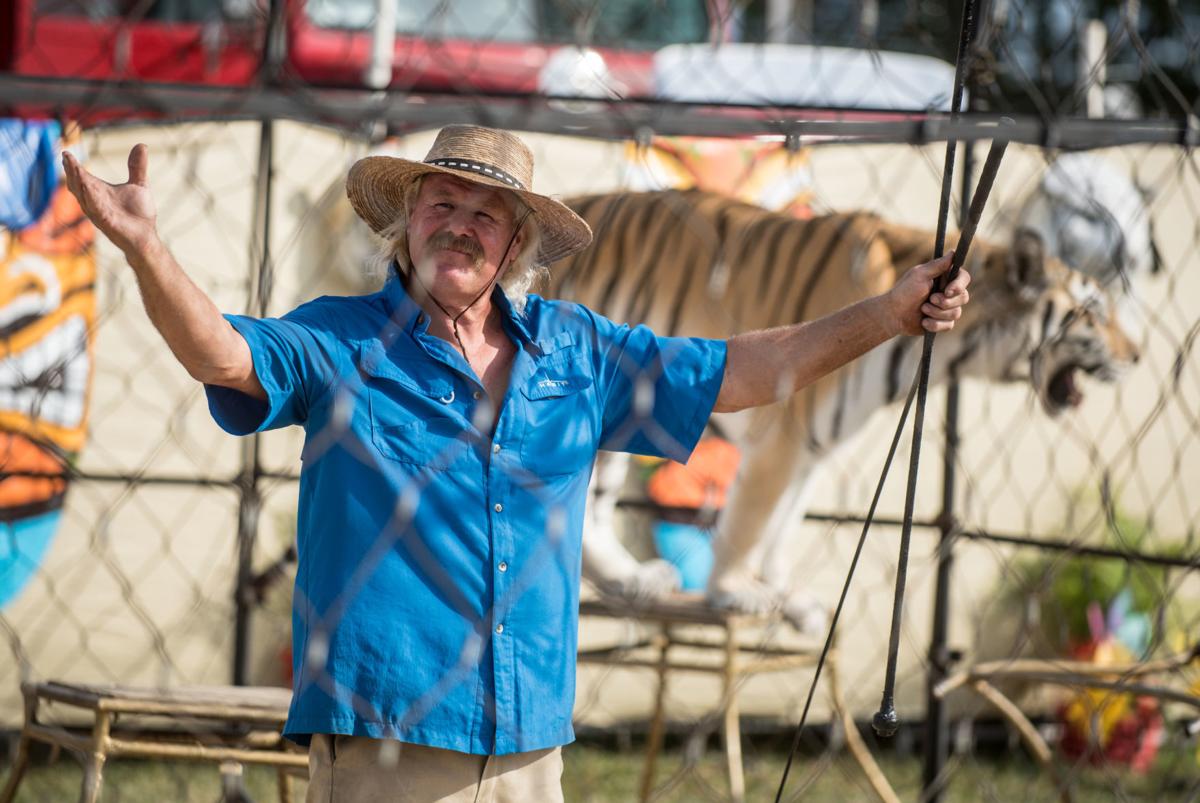 Vincent VanDuke leads his tigers and lion through a show routine during the Close Encounters of the Exotic Kind show Monday afternoon at the Rockingham County Fair. 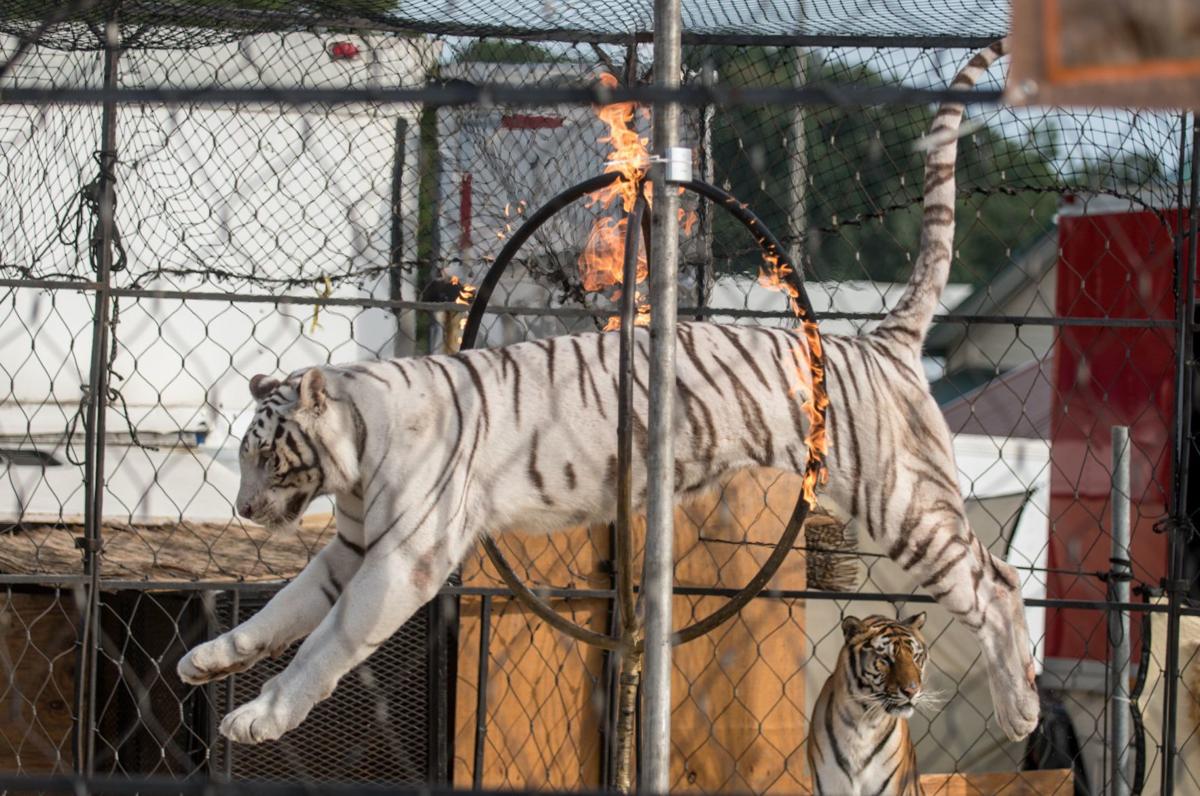 Kaya jumps through a flaming hoop during the Close Encounters of the Exotic Kind show Monday afternoon. 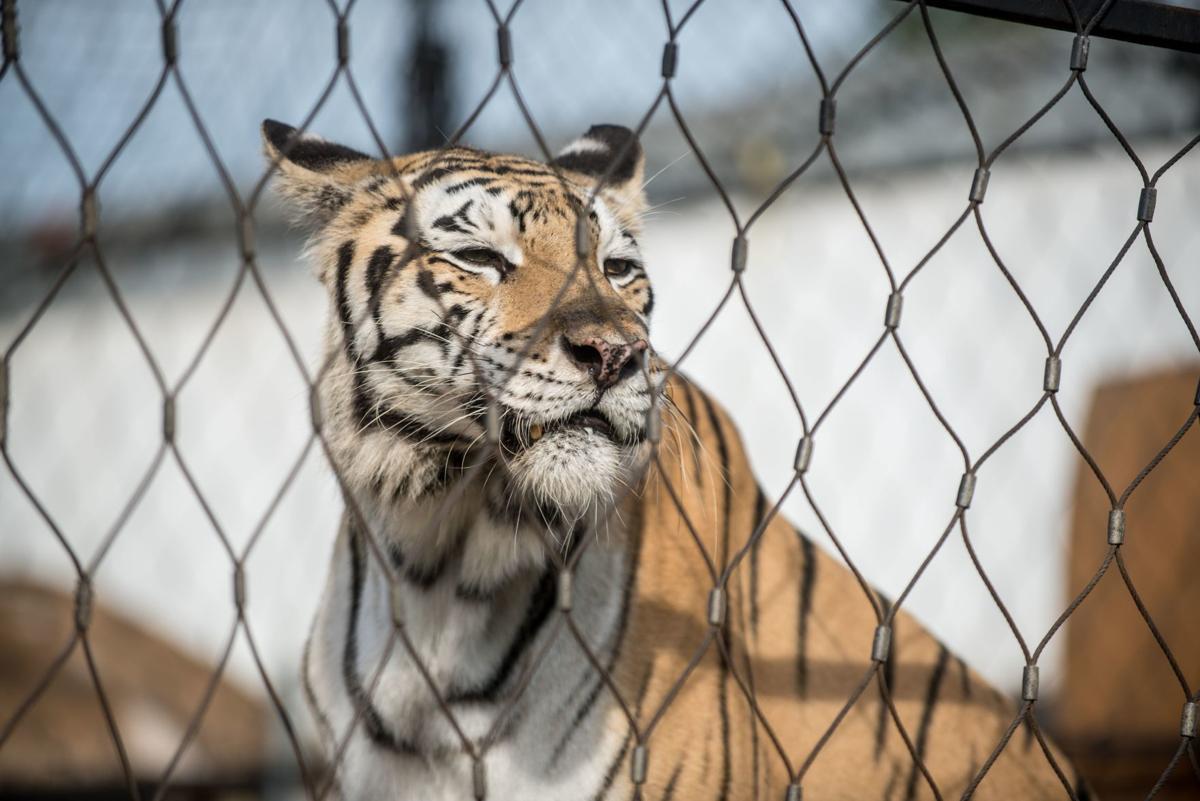 Narnia, a tiger on tour with Close Encounters of the Exotic Kind, looks out at the audience Monday afternoon. 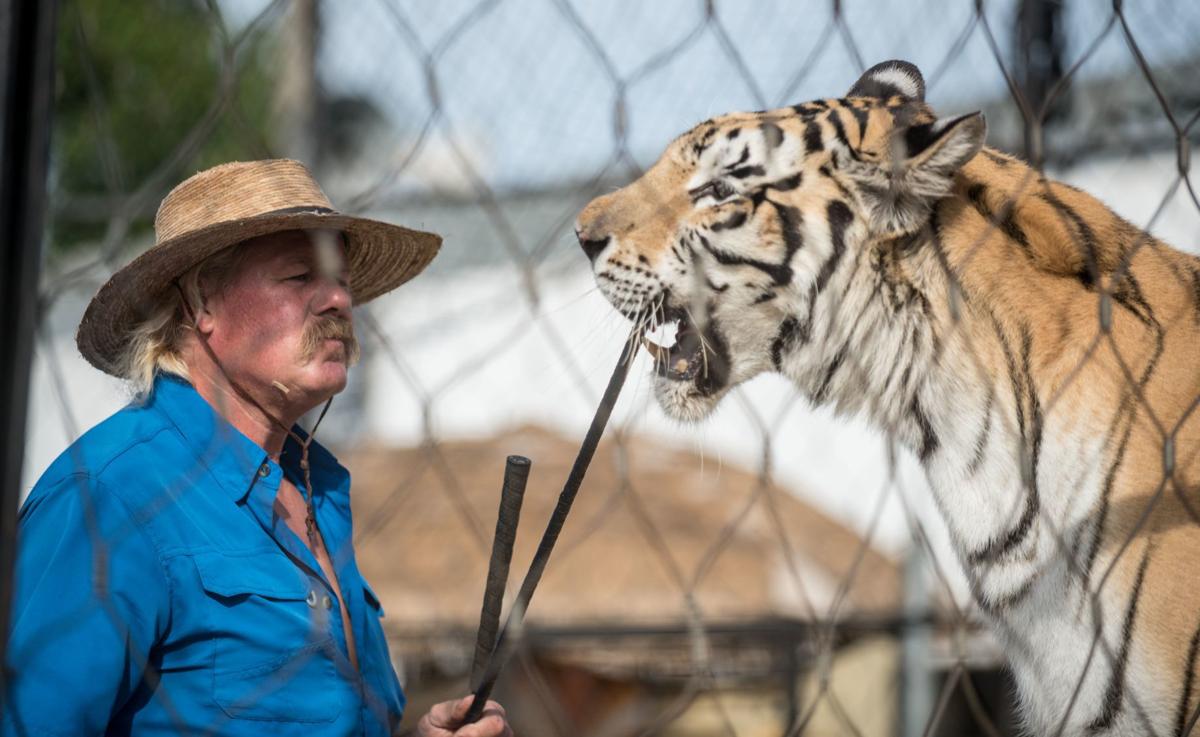 Vincent VanDuke leads his tigers and lion through a show routine during the Close Encounters of the Exotic Kind show Monday afternoon at the Rockingham County Fair.

Kaya jumps through a flaming hoop during the Close Encounters of the Exotic Kind show Monday afternoon.

Narnia, a tiger on tour with Close Encounters of the Exotic Kind, looks out at the audience Monday afternoon.

Pompom, a native of England, grew up with lions and tigers in her home and at 8 years old, she began training the animals to perform and be a part of the circus lifestyle.

Now she puts on shows with her husband of 33 years, Vincent VanDuke.

VanDuke was also born into the circus lifestyle, but started out in Germany.

At the show Monday evening at the Rockingham County Fair, the couple showed off their lion, Mufasa, and three female tigers — Nipper, Kaya and Narnia.

As the animals came out of hiding in their air-conditioned truck, the large crowd echoed with applause.

Heather Eberly watched as the lions and tigers jumped through fire and did their obstacle courses.

Eberly, who has been attending the Rockingham County Fair since she was a kid, said she has always been partial to the lions because of how beautiful they are.

“I’m impressed by how well-trained they all are,” she said. “I have only seen them at the zoo, so I’ve never seen them in this light.”

She said she is curious what their lives are like outside the show and how they get raised and trained.

Pompom said many people think lions and tigers are abused and taken from the wild to be trained to work in the circus and fairs.

“We have never gotten a lion or tiger out of a jungle,” Pompom said. “They are all hand-raised. We get them from breeders at 4 months and they live in our home.”

From the time the animals go home with Pompom and VanDuke in Florida, their grandchildren bottle-feed them.

“We get up every morning and start work with them, which includes bathing them every day and feeding them and giving them water, and eventually training them,” she said. “But this isn’t a job. It’s a lifestyle for us.”

But the best part about training them is getting to take them around the United States to shows and seeing the crowds come to see the intelligent animals.

“I love being able to meet new people. It makes this so rewarding and to me, it’s the best part,” Pompom said, adding that traveling is also the hardest part.

Sheri Kale stopped by to watch the show with her kids, Leah and Bailey, 8-year-old twins who were celebrating their birthday.

“They are so big!” Leah said as she pointed at the animals.

Bailey was more focused on the white tiger at the show.

Pompom said the tigers are very intelligent and are easier to train than lions.

“Lions are lazy and stubborn,” Pompom said. “So they really like getting their raw meat treat whenever they do something right.”

Traveling from New York to Pennsylvania to Rockingham County, Pompom said she is excited to be able to put on the “Close Encounter of the Exotic Kind” every day throughout the fair.