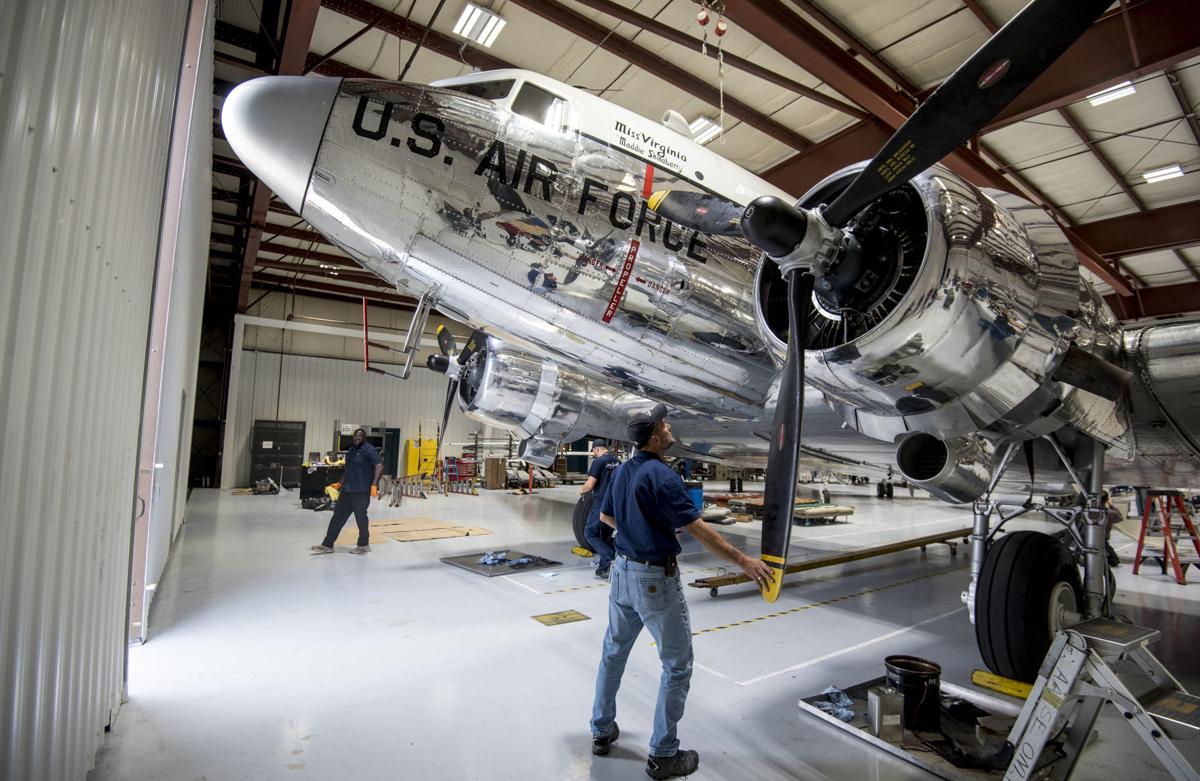 Dynamic Aviation’s restored DC-3 airliner, named Miss Virginia, is prepped for a test flight from Bridgewater Air Park on Tuesday morning before embarking on a trip to France for the 75th anniversary of D-Day. 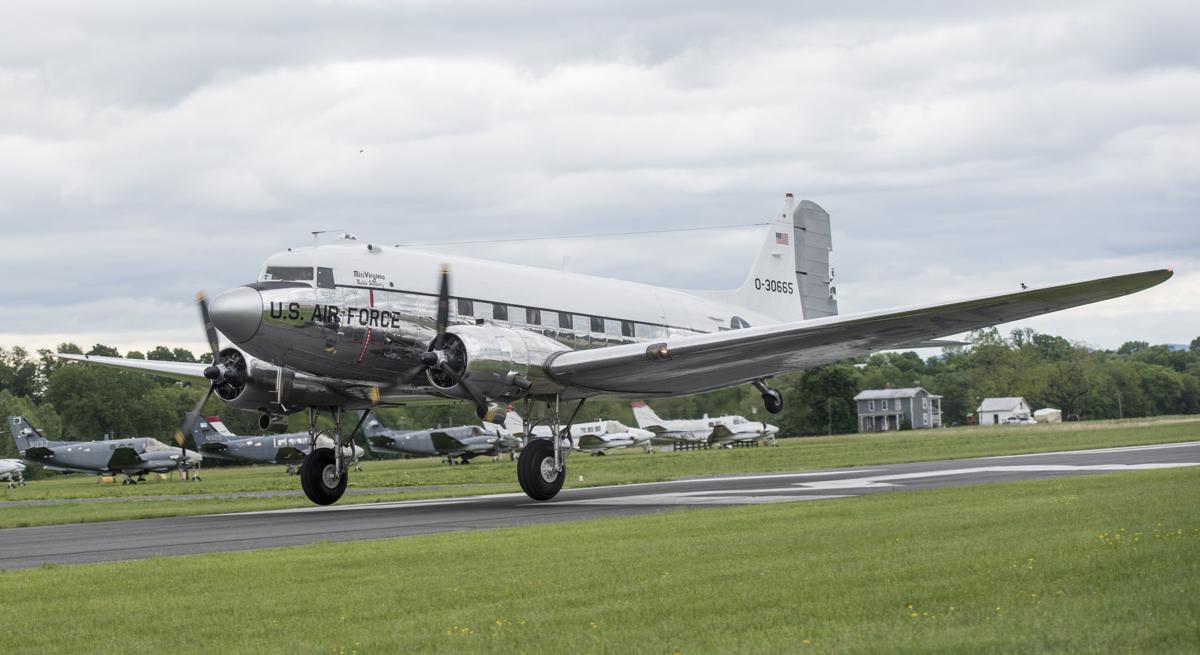 Miss Virginia takes off on a test flight from Bridgewater Air Park on Tuesday morning. 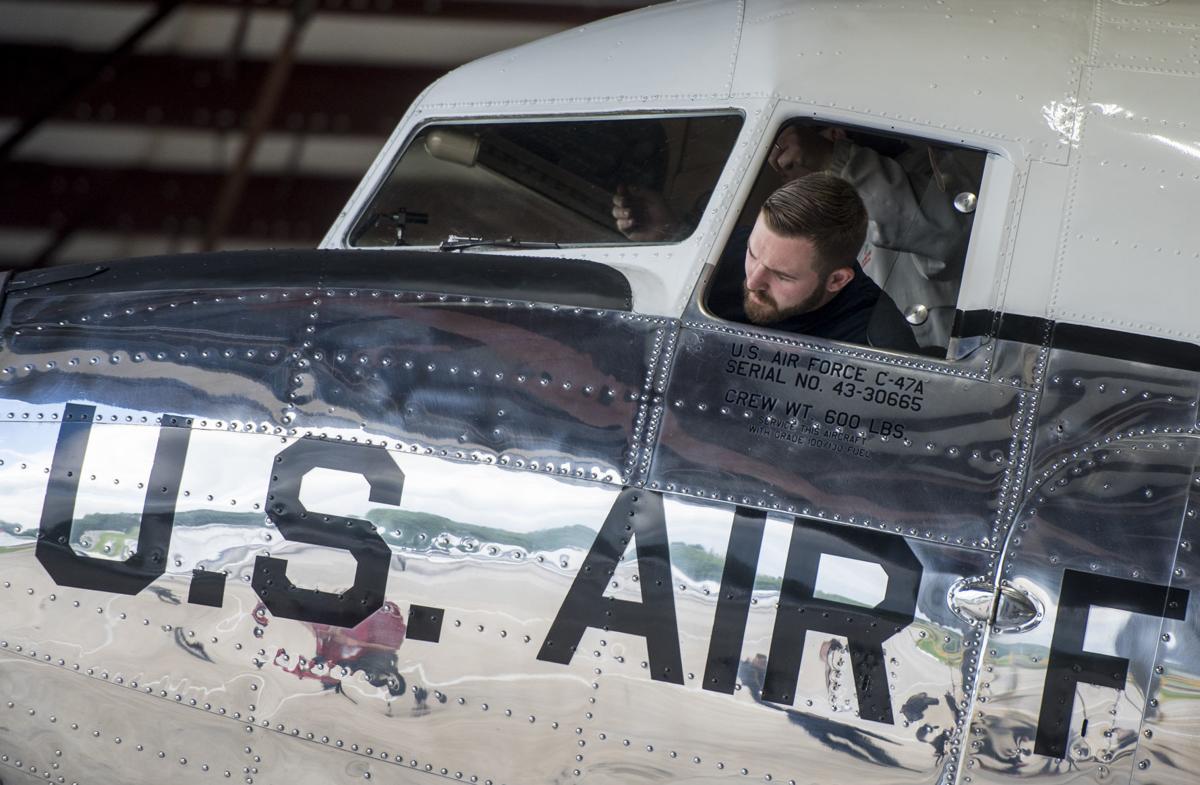 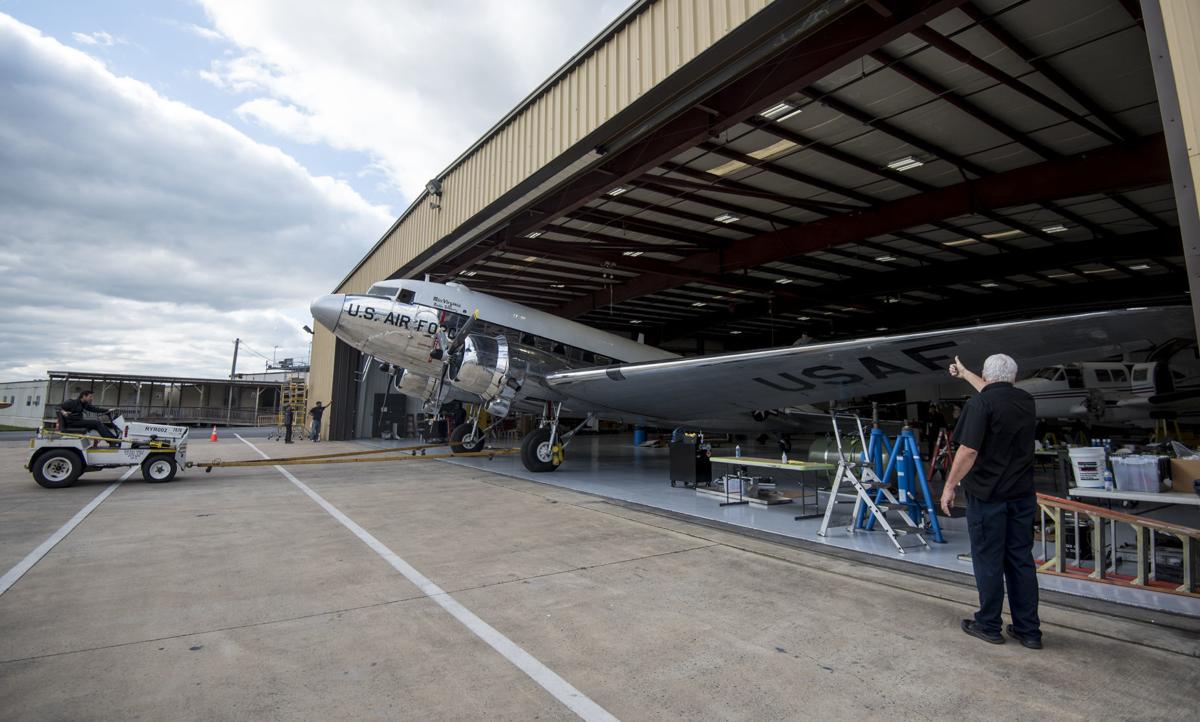 Dynamic Aviation's restored DC-3 airliner is rolled out of a hangar for a test flight from Bridgewater Air Park Tuesday morning.

Dynamic Aviation’s restored DC-3 airliner, named Miss Virginia, is prepped for a test flight from Bridgewater Air Park on Tuesday morning before embarking on a trip to France for the 75th anniversary of D-Day.

Miss Virginia takes off on a test flight from Bridgewater Air Park on Tuesday morning.

Dynamic Aviation's restored DC-3 airliner is rolled out of a hangar for a test flight from Bridgewater Air Park Tuesday morning.

BRIDGEWATER — When a C-47 dubbed Miss Virginia was manufactured in 1943, her entire military service career was based in the United States, never landing on European soil.

However, Miss Virginia may be able to change that.

Since 1990, Bridgewater-based Dynamic Aviation has taken the C-47-turned-DC-3 under its wing, where she was modified for mosquito and gypsy moth spraying before being restored back to its military appearance.

To commemorate the 75th anniversary of the D-Day invasion into Normandy, France, during World War II, the D-Day Squadron was formed as a U.S. contingent of more than 30 C-47’s that will fly to England on what is known as the “Blue Spruce Route.” It was used during World War II to move aircraft to European front-line service, according to Sarah Hedrick, community relations manager at Dynamic Aviation.

“Our team has been hard at work preparing our 1943 C-47 Miss Virginia for Dynamic Aviation’s involvement with, and participation, in the D-Day Squadron,” Hedrick said.

“You are never quite done,” Lorson said. “This whole idea has been several years in the making. … Karl is the driving force behind all of this.”

Miss Virginia departed from Bridgewater on Tuesday and is en route to Oxford, Conn., for formation training.

The Douglas DC-3 and the Douglas C-47 airplanes were extensively used by the Allies during World War II, including the Allied invasion of Normandy in 1944.

Miss Virginia performed a variety of missions, including troop transport and time with the National Guard, before retiring in 1974. She then was operated by the Wycliffe Bible Transport and Jungle Aviation and Radio Service in Colombia.

“It was actually in extremely good condition when we bought it,” said Karl Stoltzfus, Dynamic Aviation founder and board chairman. “[Miss Virginia] never went to Europe and now she will have her first trip to Europe.”

In 1999, she retired once again until 2010, when Dynamic Aviation restored the aircraft back to its military guise and gave it the name Miss Virginia, using the plane for air shows and community events.

From Connecticut, Miss Virginia will make her away across the Atlantic Ocean to join Daks Over Normandy in England.

“Upon arrival to England, we will join our European counterpart, Daks Over Normandy, in a mass formation flight of over 30 C-47’s,” Hedrick said. “Two hundred and fifty paratroopers will jump over the original 1944 drop zones in Normandy.”

Hedrick said that after Normandy, the D-Day Squadron will fly into Germany to commemorate the 70th anniversary of the Berlin Airlift. While in Germany, they will be making flights in Weisbaden, Fasberg and Schönhagen.

It will take Miss Virginia and the 10 crew members two weeks to get back across the Atlantic. The crew and Miss Virginia will be back in Bridgewater by the end of June.

Lorson said being a part of the historic event is a way to “really honor the sacrifices made” during the D-Day invasion into Normandy and World War II.

For Stoltzfus, it is a “trip back in history.”

“To be a part of this historic event, to have the plane in the United Kingdom, France, Germany, Austria, all of these places … it is going to be quite an epic journey,” Stoltzfus said.