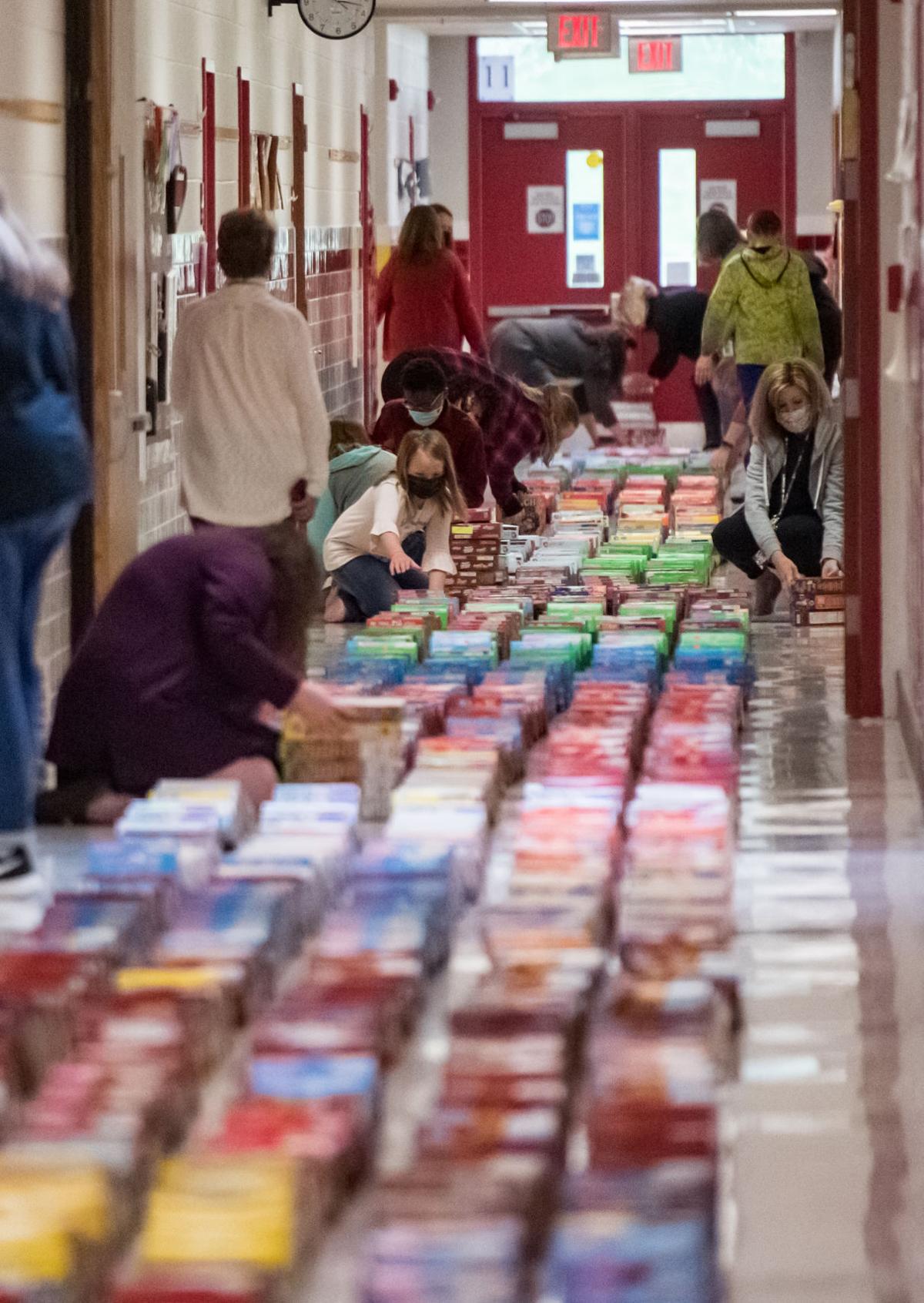 River Bend Elementary School teachers and students collect and count up cereal boxes after their world record attempt for largest cereal box domino chain on Wednesday at the Elkton school. 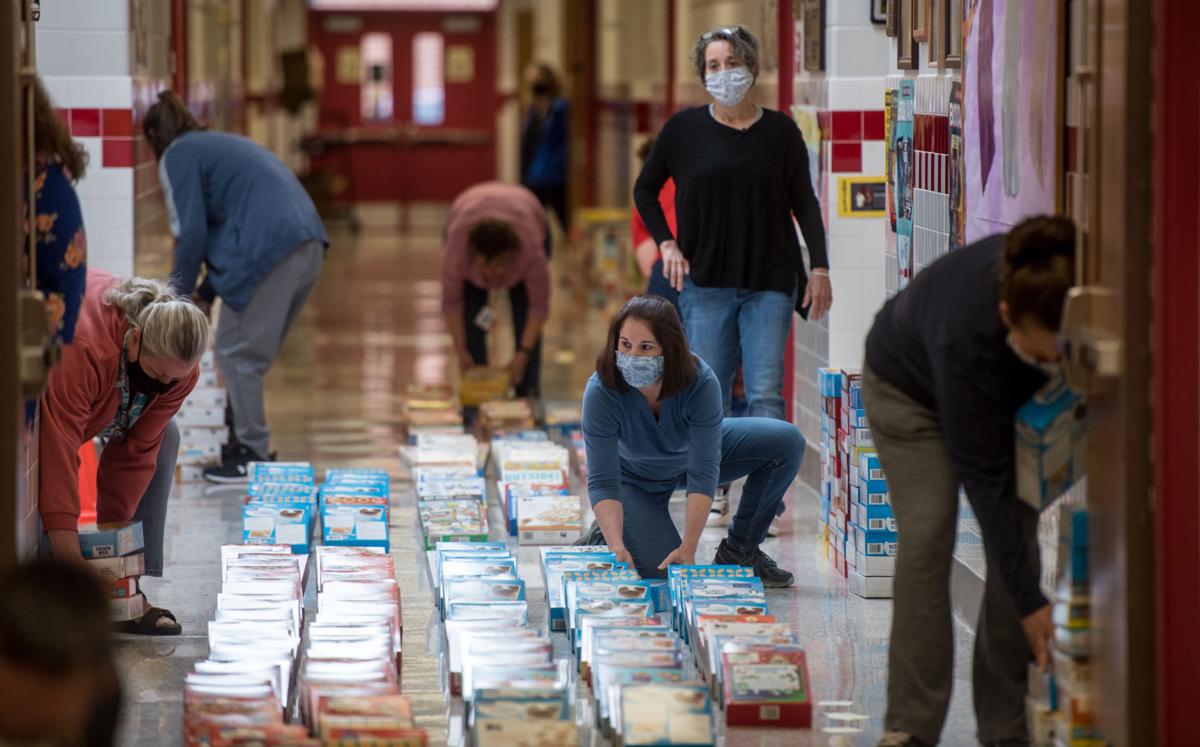 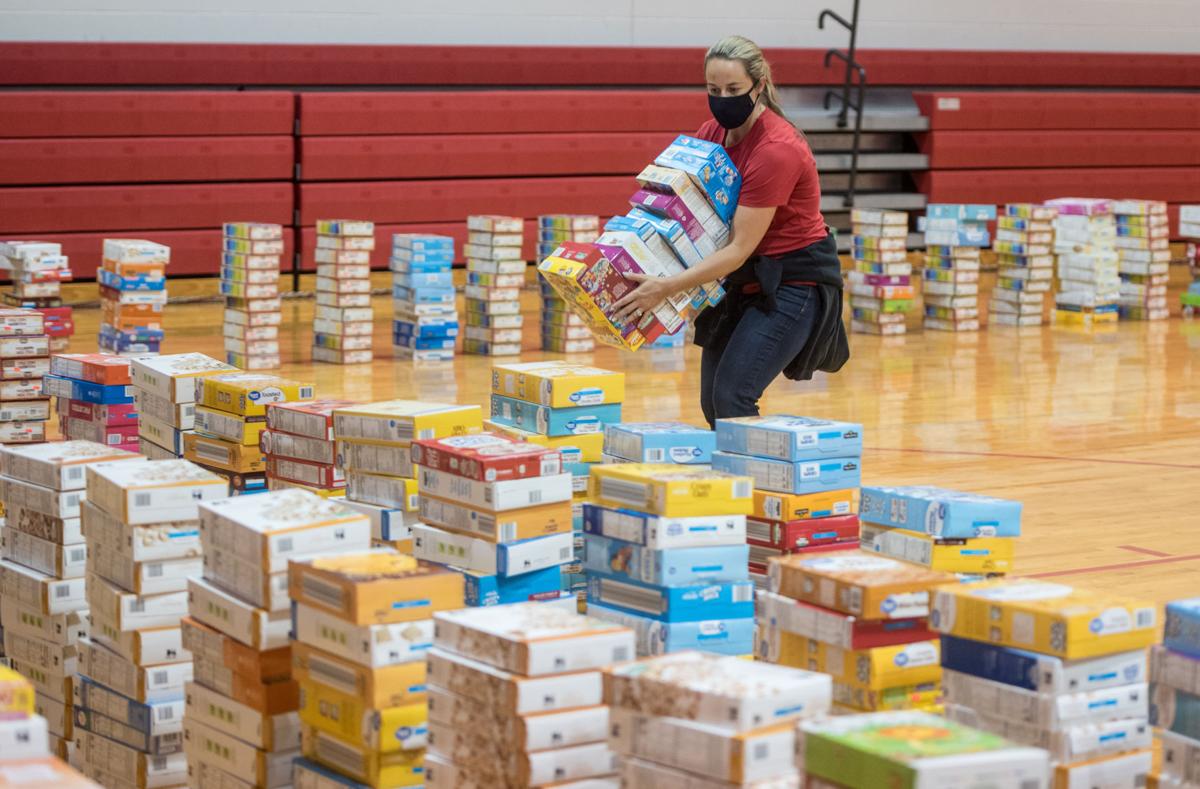 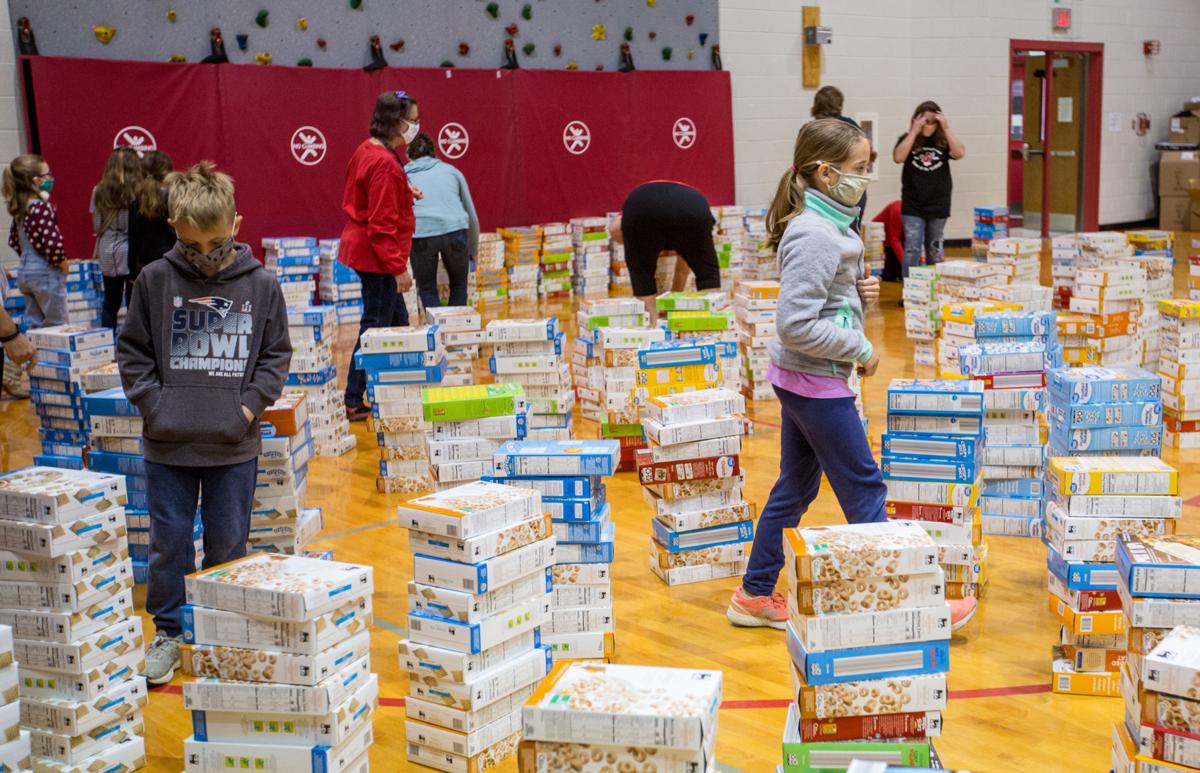 River Bend Elementary School teachers and students collect and count up cereal boxes after their world record attempt for largest cereal box domino chain on Wednesday at the Elkton school.

ELKTON — What does it take to prepare the longest domino train of cereal boxes in recorded world history?

A lot, but bet you wouldn’t have guessed over-the-counter pain medication would be one of them. But you’d be wrong.

“Ibuprofen is our friend,” said Kim Muraskin, a school counselor at River Bend Elementary School in Elkton. “I’ve heard that feet hurt, sore muscles, knees hurt. But it’s worth it.”

It makes sense when you think about it. Placing over 4,600 cereal boxes in lines on the floor of the school, in a pattern that an engineer consulted on, is tough on the knees.

If you walked into River Bend on Wednesday morning, you would have had to be very careful where you walked. The main corridor of the school was taken up by five lines of cereal boxes, spaced about 4 to 5 inches apart. The lanes of boxes eventually made a turn into the gym, where they fanned out into an impressively wide design of boxes.

The design was carefully considered and constructed with the help of a local engineering firm where a River Bend parent works, Muraskin said.

“When people do this, they add a lot of turns, and turns are tricky,” she said. That’s why there was only one turn into the gym for space purposes.

It was also important to leave “breaks” when setting up the track, so if an accident happened and someone nudged a box, it wouldn’t knock down the whole track. And accidents did happen, Muraskin said. About 30 boxes fell in the hall while being set up and even more in the gym while setting up the fan.

In all, it took 20 people about seven hours to set up all 4,600 boxes. They started after school on Tuesday and worked until about 9:30 p.m.

“There were a lot of laughs, and a lot of fun was had,” Muraskin said.

Furthermore, no one would say it wasn’t worth it if they witnessed the excitement and elation on the faces of the students and teachers when those boxes finally fell, shortly after 10 a.m. on Wednesday.

The cheers rose and traveled down the hall as the boxes fell one over the other. As boxes fell, students rushed down the hall, trying to keep up with the progress of the domino train. Finally, in grand fashion, the boxes came to a rest in the gym with only a few still standing.

Protocols had to be followed after the conclusion of the event, however, because this wasn’t just for fun. The school was attempting to break the Guinness World Record for number of cereal boxes knocked down in a domino chain. Therefore, any box that didn’t fall had to be removed from the counting process.

The current world record is 3,417, although a school in South Carolina recently participated in its own event and reportedly had about 3,800 boxes. Regardless, River Bend students had approximately 4,600 boxes in their domino chain, which should handily break the record.

Along with carefully counting the number of boxes that fell, two impartial witnesses had to be present to attest to the validity and the integrity of the event, Muraskin said. Those individuals were Elkton Mayor Joshua Gooden and Town Council member Jessica Moubray. Along with their testimony, videos of the event will be submitted to the Guinness Book of World Records for consideration to be the world champs for the most cereal boxes in a domino chain.

“It can be a long process,” Muraskin said.

Fifth grade student Xander Ralston had the honor of knocking down the first box of cereal after helping set them up the night before with his dad.

“It was a lot of work, but it was good,” Xander said. “A lot of them got knocked down.”

The cereal boxes, which were donated by students as well as area businesses, will be distributed to a variety of organizations, including the Elkton Area United Services food bank, Hope Distributed, the Blue Ridge Area Food Bank, Blessed Sacrament food pantry and Mercy House.

An average box of cereal contains about three-quarters of a pound of cereal. At 4,600 boxes, that’s 3,450 pounds of cereal collected and donated by the kids of River Bend Elementary School — roughly the same weight as a compact truck or an SUV.