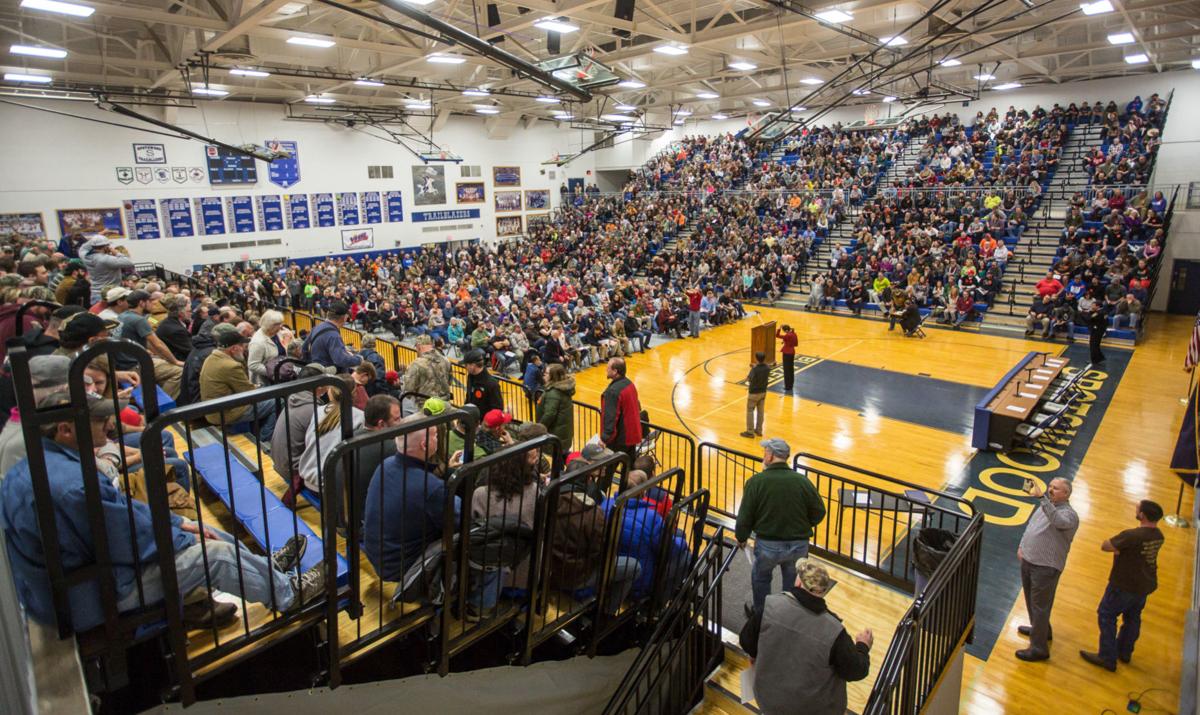 A packed house fills the Spotswood High School gym for on Wednesday. 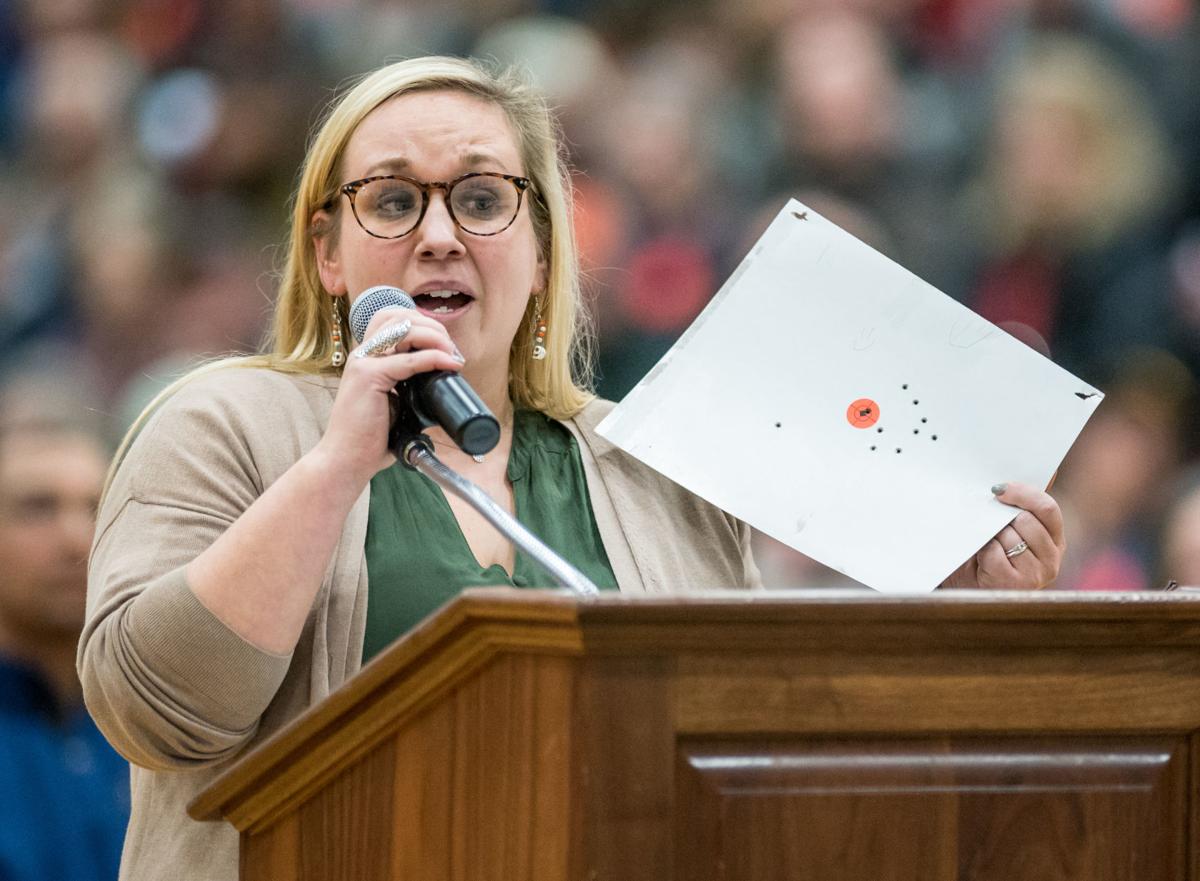 Rockingham County resident Thea Litchfield Campbell holds a target shot by her daughter as she expresses her concerns to the Board of Supervisors on their proposed resolution to become a Second Amendment sanctuary on Wednesday at Spotswood High School.

The crowd at the Rockingham County Board of Supervisors public hearing on becoming a Second Amendment sanctuary county recite the Pledge of Allegiance before the start of comments Wednesday at Spotswood High School.

A packed house fills the Spotswood High School gym for on Wednesday.

Rockingham County resident Thea Litchfield Campbell holds a target shot by her daughter as she expresses her concerns to the Board of Supervisors on their proposed resolution to become a Second Amendment sanctuary on Wednesday at Spotswood High School.

PENN LAIRD — Rockingham County joined the growing number of localities in the state to become a Second Amendment sanctuary Wednesday after the Board of Supervisors voted unanimously in support of the resolution.

Supervisors were joined by a crowd of more than 3,000 people inside the Spotswood High School gymnasium. The standing-room only crowd also spilled into the commons area of the school

“There was probably 4,000 people there,” said Supervisor Rick Chandler, who represents District 3.

The majority of those who spoke were in favor of Rockingham County becoming a Second Amendment sanctuary instead of the county declaring an intent to oppose unconstitutional restrictions on the right to keep and bear arms through any and all legal means.

Daryl Borgquist, with the Rockingham County Republican Committee, was the first to speak in favor of the Second Amendment sanctuary, telling the board that “tonight is about taking a stand.”

“Tonight’s gathering of citizens here is a mandate,” Borgquist said. “They are not the political elites from outside the state who bought an election. They are the ordinary citizens who live here, many for generations. A popular movement of this size and scope is unprecedented in the Commonwealth of Virginia.”

He said that due to proposed legislation, those who use a firearm responsibly would be considered a felon, punishable by one to five years in prison.

On the Democratic side, Thea Campbell, chair of the Rockingham Democratic Committee, said she was concerned with the proposed resolution due to it not mentioning who gets to determine when a state law is constitutional or not.

“Action must be taken to court, not the Board of Supervisors,” she said.

Campbell urged the board to either reject the resolution or table it in order to add “clear, balanced language” to ensure the Constitution upholds all state laws.

Dan Cullers, chair of the Rockingham County Republican Committee, spoke on behalf of Rep. Ben Cline, R-Lexington, who was unable to attend the public hearing.

Cline wrote in a letter that he was thrilled to see the groundswell of support in Rockingham County and across the commonwealth in support of the Second Amendment.

“Your God-given liberties cannot be taken away by the actions of men, they can only be suppressed,” he wrote. “Speak loudly and with one voice, and the incoming legislature in Richmond will hear you just as your Board of Supervisors hears you tonight.”

“These firearm legislation are directly infringing on our Second Amendment rights,” he said. “The Second Amendment is exactly what it says — it is for everyone, and everyone in this free nation has the right to defend themselves.”

Kyle Fisher, a student at Spotswood High School, told the board that they “must stand strong in the face of bullies.”

The Board of Supervisors released two versions of a proposed resolution — one without the word “sanctuary” on Tuesday before releasing a second draft Wednesday with “sanctuary” included.

The choice to leave out sanctuary was something David Dean said he struggled to understand, adding that the first draft “failed to apply the gravity of the situation.”

“We want Richmond to hear from our county as well as others,” he said.

While 18 out of 20 speakers were in support of the county becoming a Second Amendment sanctuary, Ruth Jost found herself in the middle.

Jost told the board that the resolution was written to protect her gun rights, but questioned the right to life itself.

“This resolution seems to misunderstand the right of guns to the right of life,” she said. “Our gun rights are safe so long as gun safety is right.”

Jost suggested having red flag laws in place, to which the crowd responded with loud boos.

Breeden told the audience to be fair to everyone, with a member of the crowd yelling “Don’t forget the First Amendment.”

After a few more speakers took their three minutes at the podium, Malcom McIntyre used his time to ask the audience if it was opposed to the resolution. Five people stood.

When he asked who was in favor of the first resolution without the word sanctuary, even fewer stood.

His last question asked those who supported the second resolution, which included the word sanctuary to stand. Thousands stood in support, leading Breeden to ask the crowd if the board should take a vote at that time.

The public hearing closed with 20 of the 60 people signed up to speak getting time at the podium before Supervisor Pablo Cuevas took the floor to announce the board’s decision.

He spoke of the time living in Cuba when Fidel Castro reigned over the country.

“Most everyone in our country turned in their guns. The people living in that country have suffered,” Cuevas said. “Tonight is just one expression of what you have, but the battle is not over. There are places for that battle to be heard.”

Then, Cuevas read the resolution the board would vote on and the crowd erupted into cheers when he said the word “sanctuary.”

He then walked back to his chair and joined the other four Supervisors in their unanimous decision.

local chapters of the tiny brain and tiny p*nis cult

The speeches given by the pro-sanctuary speakers were full of contradictions. Repeating "guns don't kill people, people kill people" and then arguing against enforcing background checks on *people* and temporarily removing guns from dangerous *people* is completely illogical. Gun safety instructors expounded on the importance and tradition of their education, yet don't support requiring gun safety instruction. I left early from the meeting, to jeers, after trying to convey some facts through signs. Universal background checks are associated with 10% lower homicide rates. Nearly 30% of deaths of children from firearms are secondary to domestic violence situations. As a physician, sister to a police officer, mother of an Eagle Scout who has won awards for his marksmanship, I am saddened that paranoia about the government would create such resistance to common sense strategies to protect our communities. We all will pay the sacrifice, in the blood of our family and friends.

We will pay if we let pantswetting bureaucrats infringe upon our God given rights, so...

If Rockingham County has to spend thousands of dollars defending the inevitable lawsuits that will result from this "feel good" resolution, then the bill should be sent to the people who supported it. This resolution has no practical meaning, but it sure made the lawyers happy!

And may I say to all my fellow attendees and freedom lovers; you have lovely singing voices.

Amen to that deft!