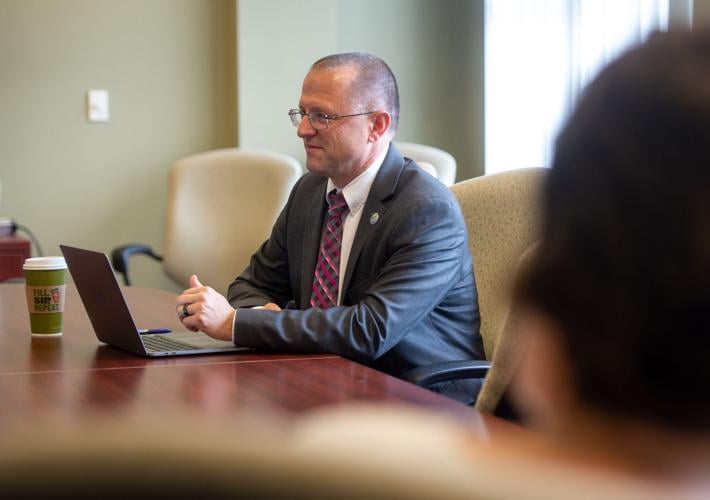 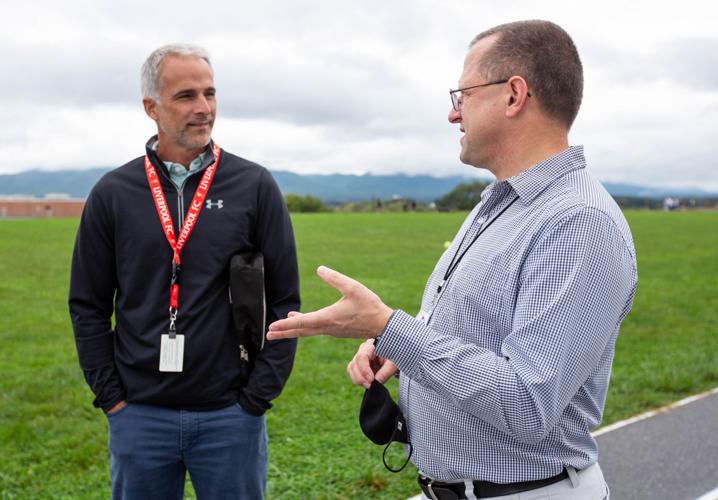 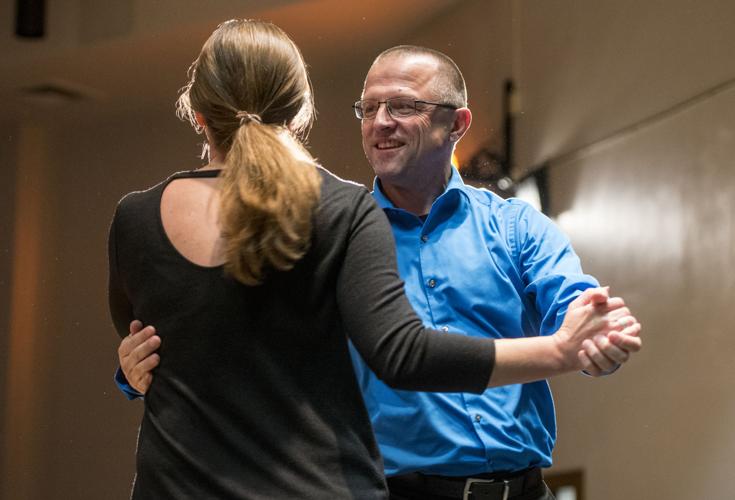 Rockingham County Public Schools Superintendent Oskar Scheikl dances with Montevideo Middle School assistant Principal Jackie Baker on the school’s stage as they rehearse their routine for the Dancing with the Stars of the ‘Burg in October 2019.

Rockingham County Public Schools Superintendent Oskar Scheikl dances with Montevideo Middle School assistant Principal Jackie Baker on the school’s stage as they rehearse their routine for the Dancing with the Stars of the ‘Burg in October 2019.

It wasn’t a coincidence that Oskar Scheikl announced his impending retirement Monday at Broadway High School.

Scheikl felt it fitting that he share the news that he was stepping down as superintendent of Rockingham County Public Schools in the same location he began his career in education.

Twenty-seven years and a few weeks ago, Scheikl stepped into Broadway High School as a social studies teacher. He had only been in the country for two and a half years, having traveled to the United States from Austria to get his master‘s degree from James Madison University. It was the beginning of a career that would take him through different roles and ultimately to the highest position in RCPS.

Once Scheikl knew that this would be his last year, he looked at the School Board meeting schedule and made sure Broadway was the hosting school for the meeting where he would announce his retirement.

“I talked for years about ways to improve education, and this was an opportunity to do the work,” he said.

Scheikl came into the position of superintendent with a few goals in mind — he wanted to increase opportunities for project-based learning for students and to improve the school division‘s mental and behavioral health services.

Through the implementation of curricula and employee professional development, RCPS has been recognized nationally and at the state level for project-based learning in a variety of subject areas.

Under Scheikl, the school division has also added around 40 full-time specialists in the mental and behavioral health fields. While other school divisions were trying to figure out how to add these kinds of positions to their budgets when the pandemic happened, RCPS had already figured that out.

“Having had some time to be a part of [those successes] has been a privilege,” Scheikl said.

It was two years ago that Scheikl began to seriously think about retirement. He hadn’t spent significant time with his mother since he left Austria almost 30 years prior. Scheikl had the idea that after retiring he could live for a few months in Austria each year for as many years as he could.

“The last time I spent significant time with her, she was younger than I am now,” Scheikl said.

However, Scheikl’s mother passed away in July. Fortunately Scheikl was there with her.

With his world suddenly shifted, Scheikl debated what to do. There was still plenty of work to be done, especially having come out of a global pandemic and facing a number of divisive social issues. And while the tumultuous nature of the last few years may have played some role in his decision to follow through with his retirement plans, it ultimately wasn’t the deciding factor.

“From my first day, I knew this wasn’t going to be easy,” Scheikl said. In fact, a fellow superintendent sent him a note that said, “If you want to make everyone happy, don’t be a leader, sell ice cream.”

The past few years have made that sentiment all the more clear. The pandemic caused people to feel like they lost a lot of control over their lives, and it’s created a contentious environment in public education, Scheikl said.

But that has not discouraged Scheikl. In fact, Scheikl is considering returning to the classroom. During the pandemic, Scheikl and other members of Central Office staff spent one day a week subbing at a school when the need was great. It sparked something in Scheikl.

It may not be the end of education for Scheikl, but it will be the end of his tenure as a superintendent. Being a superintendent was never Scheikl’s career aspirations when he was starting out in education. But life has a way of moving forward. Whatever the future might hold, Scheikl has always known one thing, that Rockingham County Public Schools is the only division he will ever be superintendent of.