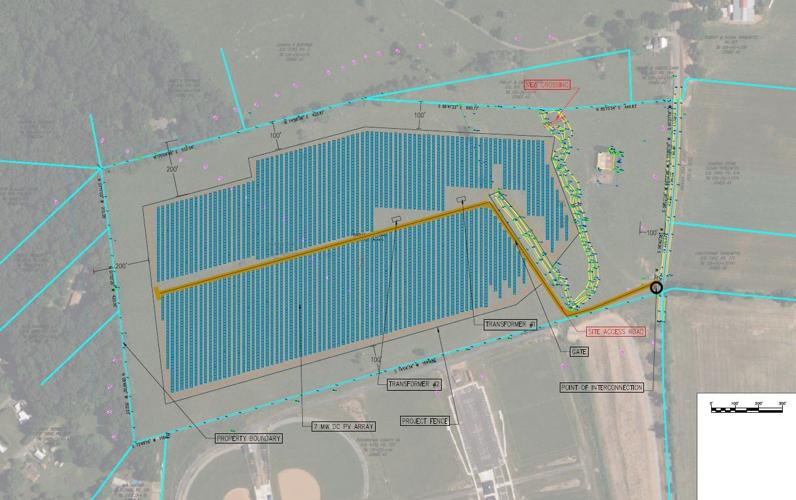 Dynamic Energy of Pennsylvania is proposing a 24-acre solar farm off Indian Trail Road in Keezletown, next to Rockingham Park at the Crossroads. 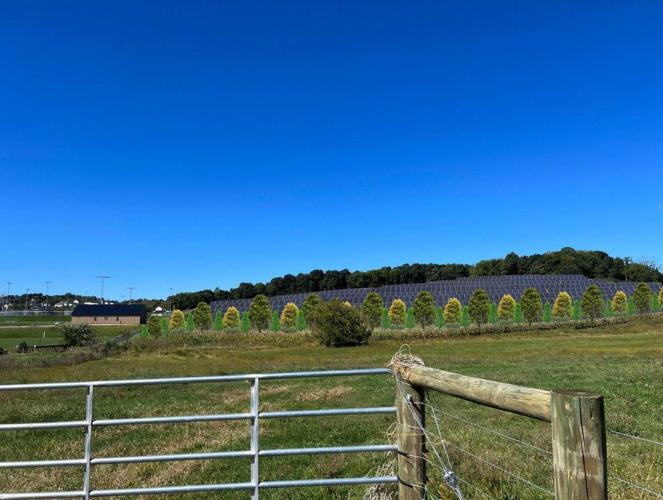 A rendering of a proposed solar farm located off Indian Trail Road. The Rockingham County Board of Supervisors will consider the request at its meeting Dec. 14.

Dynamic Energy of Pennsylvania is proposing a 24-acre solar farm off Indian Trail Road in Keezletown, next to Rockingham Park at the Crossroads.

A rendering of a proposed solar farm located off Indian Trail Road. The Rockingham County Board of Supervisors will consider the request at its meeting Dec. 14.

A Pennsylvania-based developer is hoping to hit a home run with a proposed solar farm in Keezletown, west of Rockingham Park at the Crossroads.

Mountain Valley Solar, a subsidiary of Dynamic Energy Solutions, submitted plans for a 24-acre solar project at 675 Indian Trail Road, near the west end of the county’s park.

According to county documents, Mountain Valley Solar would participate in a program with Dominion Energy, and Dominion customers would be offered to match their electricity use with output from the facility.

If approved by the Rockingham County Board of Supervisors, the Mountain Valley Solar project would supply up to five megawatts of electricity — enough to power approximately 1,000 homes, representatives said in the application.

The board, which has already approved 318 acres of the 1,800-acre solar aggregate cap in outlined in its solar ordinance, will consider the request at its Dec. 14 meeting at 6 p.m.

“The relatively small project area, compared to large utility-scale projects, and use of a single land parcel facilitates integration into the local community and retention of the existing character,” Mountain Valley Solar representatives wrote in the application. “...This geographic and resource diversity means more clean power is produced closer to the consumer which provides greater grid reliability, local emissions reduction, and energy security for the next generation.”

Mountain Valley Solar entered a 20-year lease agreement with the landowner, county documents show, and the facility would take up over half of the 42-acre property.

Sheehan said Dynamic Energy was approached by the landowner to see if a solar array would be suitable on the property.

The property will keep its agricultural zoning, and land not used by the solar project and its buffers can be cultivated for agricultural use, according to county documents.

“The best use for solar is when it’s mixed with agriculture,” Sheehan said.

Dynamic Energy representatives said in the application that fencing, existing tree lines and an added landscape buffer “shall provide screening from surrounding properties.”

According to county documents, the majority of the land is classified as soils of “statewide importance,” along with some prime agricultural soils.

“We’re resting those soils for the life of the lease,” Sheehan said, noting the “minimal disturbance” the proposal would have on the land.

“Integrative landscaping, ground cover, and maintenance of existing trees, along with the reduction in agricultural load, fertilizers, and pesticides, will allow the soil to rest prior to final restoration,” it said. “... [P]roject reviews show no known impacts on cultural, ecological or environmental preservation in the designated site area.”

Previously, Dynamic Energy proposed another solar project near Dayton, which the board denied in February.

That project, named Knight Solar, would have encompassed 22 acres off of Va. 42 just southwest of Huffman Drive. It was denied mainly because the board and Dayton officials found it was not consistent with the intent of a 1990 annexation agreement between Rockingham County and the town.

“It was just kind of an unfortunate detail,” he said. “...The county wanted to hold up their end of the deal with the town.”