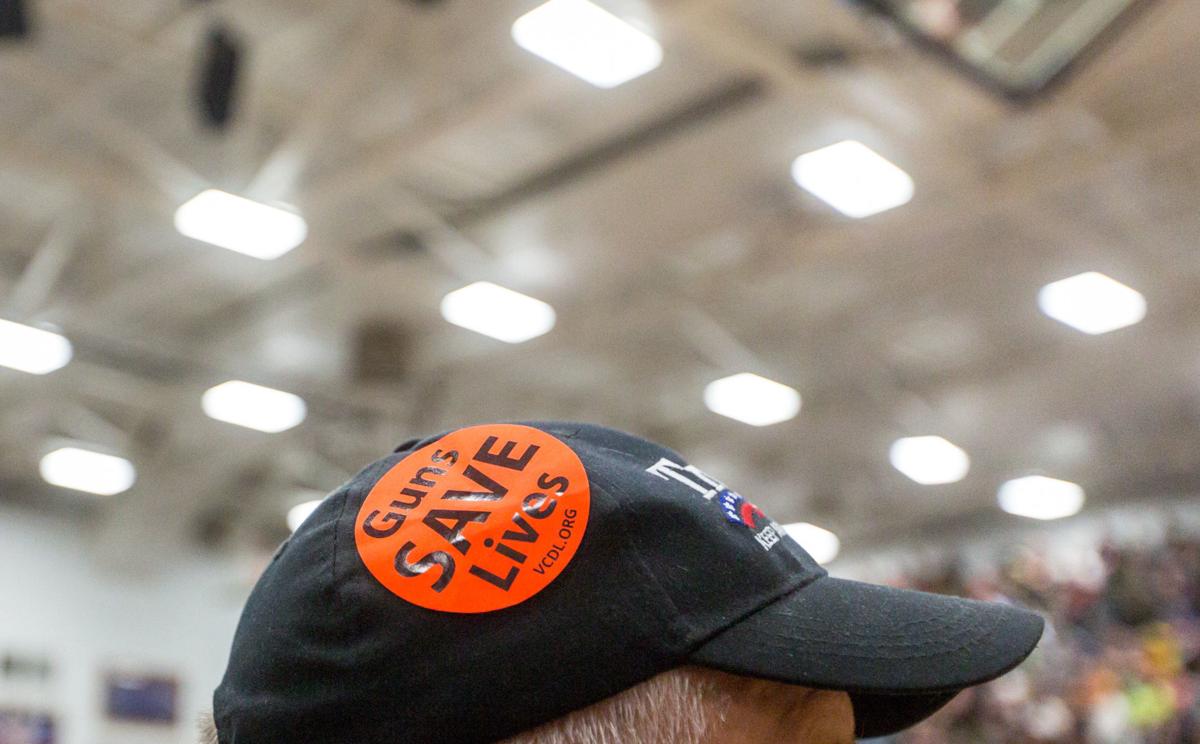 An attendee at the Rockingham County Board of Supervisors' Dec. 11 public hearing on Second Amendment sanctuary status wears a "Guns Save Lives" sticker from the Virginia Civil Defense League on his Donald Trump at Spotswood High School. At its meeting scheduled for Wednesday, the Supervisors will consider a request for an "unorganized militia." 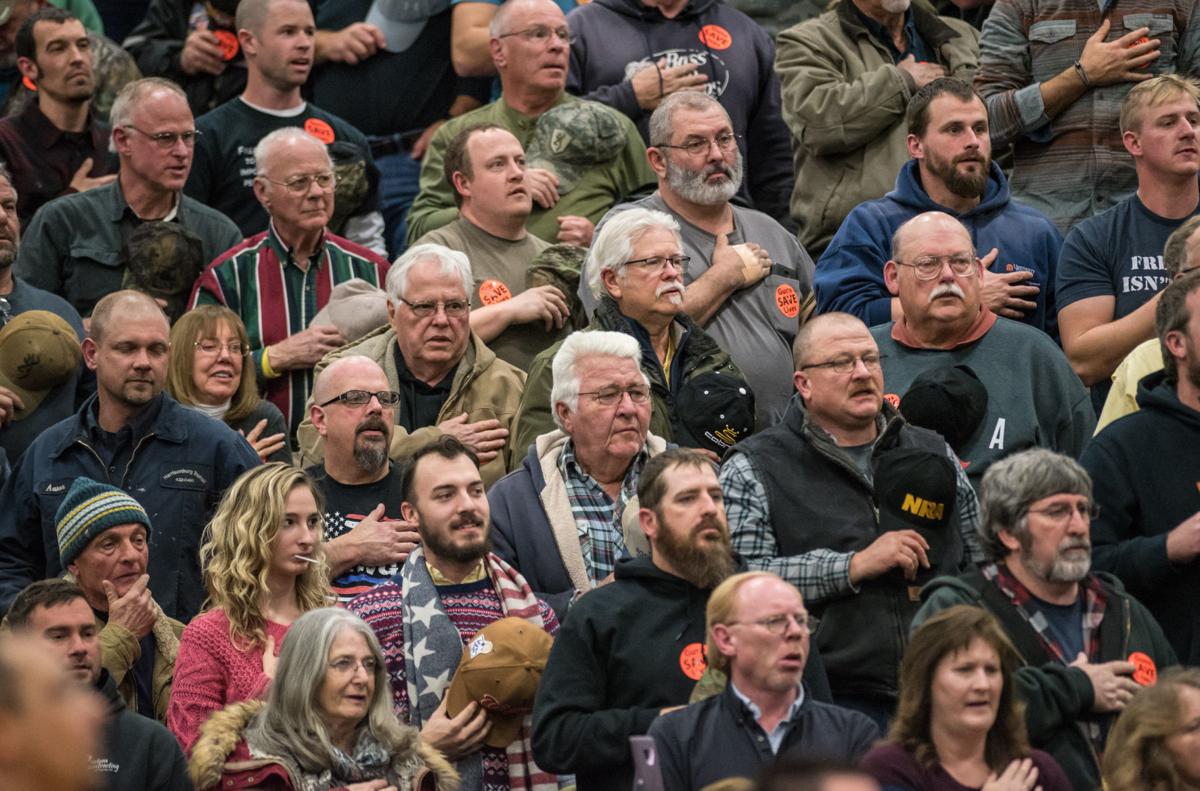 The crowd at a Rockingham County Board of Supervisors public hearing on becoming a Second Amendment sanctuary Dec. 11 recitea the Pledge of Allegiance.

An attendee at the Rockingham County Board of Supervisors' Dec. 11 public hearing on Second Amendment sanctuary status wears a "Guns Save Lives" sticker from the Virginia Civil Defense League on his Donald Trump at Spotswood High School. At its meeting scheduled for Wednesday, the Supervisors will consider a request for an "unorganized militia."

The crowd at a Rockingham County Board of Supervisors public hearing on becoming a Second Amendment sanctuary Dec. 11 recitea the Pledge of Allegiance.

Nearly three months after voting unanimously to approve a resolution making the county a Second Amendment sanctuary, the Rockingham County Board of Supervisors will consider a request for an “unorganized militia” at its next meeting.

Brian Robbins is requesting the board to consider providing new safeguards for the county’s future security at its meeting scheduled for Wednesday.

In Robbins’ request, the Board of Supervisors will call upon the Rockingham County Sheriff’s Department to “resist tyrannical attempts to deprive the people of certain firearms and components necessary for self-defense, militia service, law enforcement and national defense.”

Robbins addressed the board during the Feb. 12 meeting with concerns of protecting constitutional rights, but Chairman Bill Kyger suggested he contact County Administrator Stephen King in order to be placed on the upcoming agenda.

On Friday, King said he was unsure if Robbins is a county resident.

The request opens by referencing James Madison, who “posited that lesser governments are ‘to interpose for arresting the progress of the evil, and for maintaining within their respective limits, the authorities, rights and liberties appertaining to them.’”

Those who volunteer for the “unorganized militia” must be 18 years of age or older and be able to lawfully possess a firearm in order to serve as auxiliary sheriff’s deputies or as members of a future militia, Robbins’ request states.

Rockingham County Sheriff Bryan Hutcheson said it was too soon for a decision of this kind.

“It’s too early to say until you get some of the basic questions raised,” he said. “Everything is preliminary until laws come up.”

Hutcheson said the legalities of an unorganized militia are still in question in regards to if the militia would be private or government supported and how it would work.

According to Robbins’ request, unorganized militia members are to dress in khaki trousers, seasonal clothing and boots or shoes suitable for maneuver training and operating in the field, while openly and safely wearing a holstered handgun, “preferably semi-automatic, that is capable of accepting a magazine of 10 or more rounds.”

Members could also carry an “unloaded semi-automatic rifle, preferable a variant of the AR-15 platform, that is capable of firing the .223 Remington/5.56x45mm NATO standard cartridge and carrying at least three loaded magazines of 20 or 30 rounds capacity.”

No registration or information would be required by prospective members regarding their personally owned firearms, the request states.

If the board were to approve of calling for an unorganized militia, Robbins’ request states the militia shall serve as a local force dedicated to protecting their families and community from foreign enemies.

Calls for comment from Supervisors Kyger and Sallie Wolfe-Garrison, and Rockingham County Republican Committee Chairman Dan Cullers and the county Democratic committee were not returned.

“In time of domestic tyranny, the Militia shall serve as a force of last resort, subject to the civil power of the County, to preserve the natural rights of the People, including, but not limited to, the rights of life and liberty; the freedom of speech; the free exercise of religion; the right to trial by jury; the right to private property; the right to defense of self and defense of the community and the Rule of Law,” states the request.

Virginia is the current hot seat of the country’s heated debate over guns, as a new Democratic majority seeks to enact strict new limits.

Democrats ran heavily on gun control during last year’s legislative elections and flipped control of the General Assembly for the first time in more than two decades.

But gun owners, especially in rural communities, have pushed back. Last month, tens of thousands of guns-rights activists from around the country flooded the Capitol and surrounding area in protest. And more than 100 counties, cities and towns have declared themselves Second Amendment sanctuaries, vowing to oppose any new “unconstitutional restrictions” on guns.

The proposed assault weapon ban, which failed in Richmond on Monday, received the most opposition.

Rockingham County would not be the first county to hear a request to form a militia; residents in Franklin County and Augusta County asked their Board of Supervisors to consider a similar measure.

— The Associated Press contributed to this report

If this article is accurate I cannot think of a better way to marginalize a principled constitutional movement than by having it reduced to and associated with a group of paramilitary clad people going about claiming to be the Rockingham county militia. I would encourage Mr. Robbins to withdraw his request for the good of the movement.

Donald......….....these people are called who requested this "VIGILANTES With the County's blessing". Is this what we have sunk too? God help us! Trump MUST go.

I see this mess as getting out of control when panic hits. These gun nuts will claim they are the law in a panic situation!