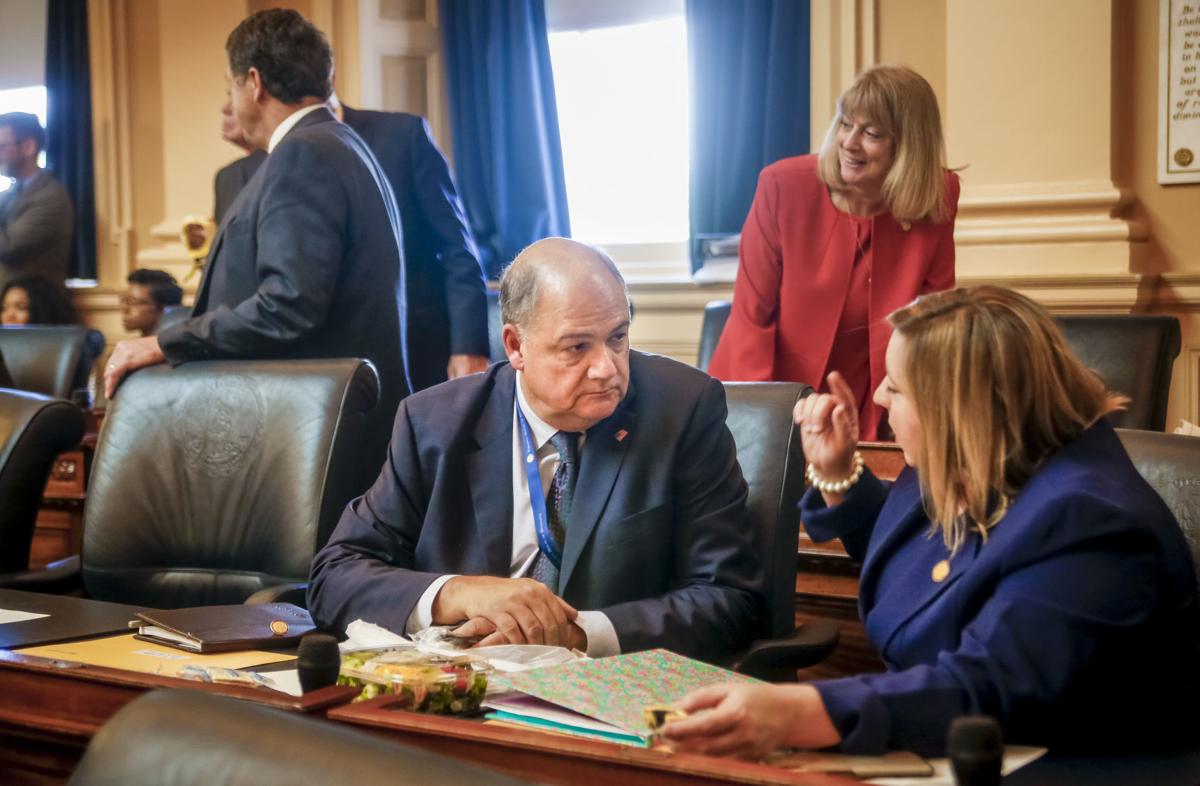 Del. Chris Runion, R-Bridgewater, speaks with Del. Emily Brewer, R-Prince George, on his first day as a legislator as the General Assembly starts its 2020 session Wednesday. 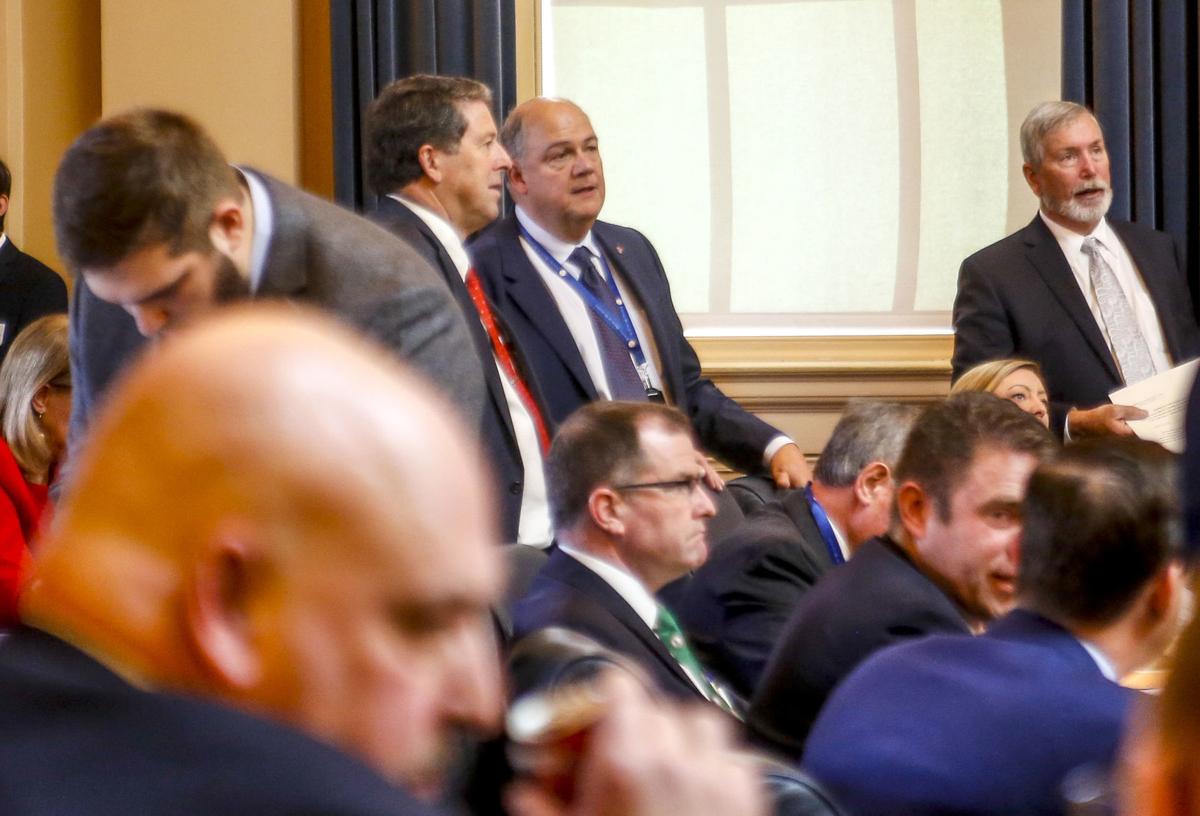 Del. Chris Runion, R-Bridgewater, center, speaks with other legislators during his on the first day of the 2020 General Assembly session. 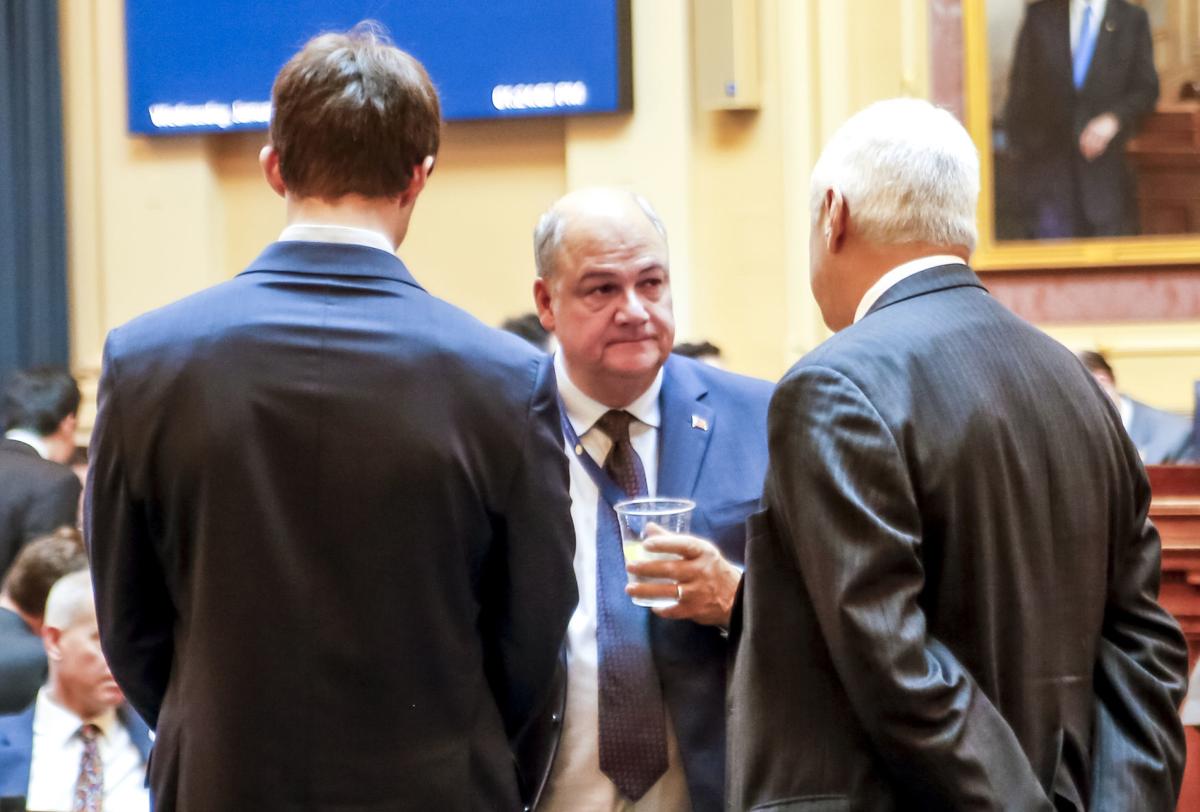 Del. Chris Runion, R-Bridgewater, speaks with fellow legislators during a break in the House of Delegates session on Wednesday.

Del. Chris Runion, R-Bridgewater, speaks with Del. Emily Brewer, R-Prince George, on his first day as a legislator as the General Assembly starts its 2020 session Wednesday.

Del. Chris Runion, R-Bridgewater, center, speaks with other legislators during his on the first day of the 2020 General Assembly session.

Del. Chris Runion, R-Bridgewater, speaks with fellow legislators during a break in the House of Delegates session on Wednesday.

RICHMOND — Between the rallies, crammed elevator rides and overall first day scramble, a tucked away hallway on the fourth floor of the Pocahontas Building is quiet.

Few staff members are walking up and down the halls, passing by the office of Del. Chris Runion, R-Bridgewater.

Still moving in, Runion’s office is mostly an empty room. The bookshelf is empty, his desk occupied by a photo of his wife, Jennifer, and a side desk made home to an Armstrong’s Restaurant menu — which was sent to him by a constituent.

“We got our business cards today though,” Runion said in laughter on Wednesday, his inaugural day in the Virginia General Assembly. “But we are still waiting for office supplies.”

On the windowsill, a stack of books fills one window up while another is occupied with another photo of his wife and a framed note that reads, “Loyal to your constituents. Do the right thing when no one looking,” which was written by a constituent Runion has known for years.

“I put it up for me, but also for our community to see,” he said.

The one thing missing from his office? A picture of George Washington.

“He did many great things, and the reason why I believe he is the greatest Founding Fathers is because he chose not to be king,” Runion said. “He served our country in a way many of us would try to do.”

Runion has spent months preparing for the first day of the 2020 General Assembly session following his November election to succeed Steve Landes, R-Weyers Cave, in representing the 25th House of Delegates District.

Representing parts of Rockingham, Augusta and Albemarle counties, Runion moved into his office on Friday, spending early mornings, 6 a.m. to be exact, getting acquainted with staff.

While sitting at his desk, which would later get an upgrade after his brother, Bob, and oldest son, Marshall, delivered a new office chair, Runion recalled the people he has met so far.

The Capitol Police officers, security, people down the hall and Rose, a woman who has worked at the Capitol for the last 30 years and places roses inside of the desks.

“Everyone is nice and cordial,” he said.

Runion can see his apartment from his office, making it a quick trip to get around in the new city.

“I realized I had never lived in a place larger than Blacksburg before,” he said.

While in Richmond, Runion will share an apartment with Del. Tony Wilt, R-Broadway.

When Runion left his office to give his wife a ticket to watch the first session, he jokingly told Wilt’s wife, Vickie, that it works out because they have opposite showering schedules and can save on hot water.

Even though Runion has made it a part of his schedule to start the day off before the sun rises, Wednesday was the first time he had to be anywhere in the morning. He attended the annual prayer breakfast at 7 a.m. along with fellow delegates and senators before holding meetings with his legislative aide, Patrick Stott.

With two hours left until the official gaveling in of the session, Runion spent time in his office, where he was visited by Heath Spivey, a senior pastor at Crossroads Baptist Church in Fishersville.

The visit came at 10:16 a.m. and lasted a few minutes. Spivey said he was visiting legislators to pray for them, and Runion asked for prayers for his wife.

The two prayed for a brief moment, creating a pause on the overwhelmed atmosphere outside of the room.

Following Spivey’s departure, Runion left his office to meet with his family and pass along their tickets to watch the first session from inside the Capitol.

At 11 a.m., Runion attended the Republican Caucus meeting before making his way to his desk on the House floor.

Runion borders the wall and is aligned with House Speaker Eileen Filler-Corn, D-Fairfax.

He sits between Dels. David LaRock, R-Clarke, and Emily Brewer, R-Prince George, while Wilt sits behind him.

Runion spends the majority of the session speaking with Brewer while the House is at ease. He gets up a few times, but is mostly seen at his desk.

During the second hour of the House being at ease, Jennifer Runion and Vickie Wilt walk onto the House floor and take a seat toward the back of the room. It doesn’t take much time for Runion to join them while delegates walk around the floor grabbing snacks, starting conversations and waiting for the Senate’s next action.

It’s nearly 4 p.m. before Runion takes time to speak with the Daily News-Record.

While reflecting on the first day of session, Runion said it had been “interesting.”

“I’ve been building relationships,” he said.

Prior to the start of the session, Runion said, he spent 30 minutes speaking with a Democrat from Virginia Beach, which he said showed his efforts in being bipartisan.

“We even agreed to have more conversations,” he said.

As the hours went by and it became closer and closer to the starting of Gov. Ralph Northam’s State of the Commonwealth address, Runion said he was going to work hard this session.

“Virginia is a different state [than] it was yesterday, yet there are still similarities,” he said. “I am not going to compromise my values.”