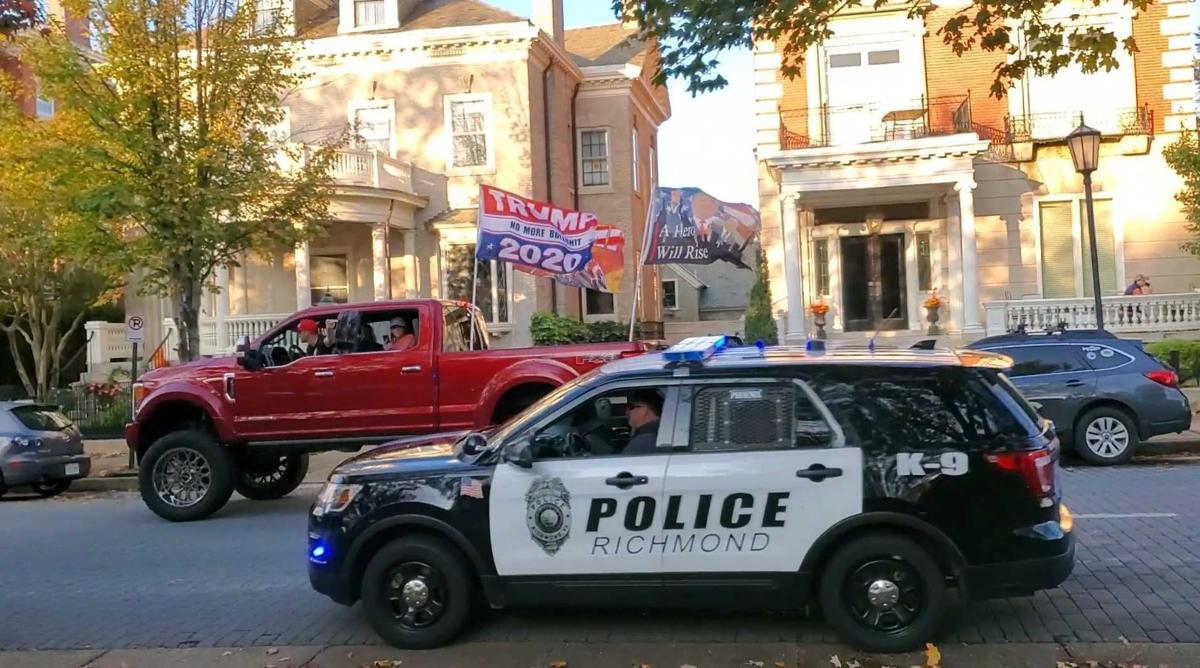 This screenshot from a video shows supporters of President Donald Trump as they make their way down Monument Avenue on Sunday.

The screenshot from video shows protesters burning flags supporting President Donald Trump that they had stolen from members of the pro-Trump "Trump Train" Sunday evening in Richmond.

This screenshot from a video shows supporters of President Donald Trump as they make their way down Monument Avenue on Sunday.

The screenshot from video shows protesters burning flags supporting President Donald Trump that they had stolen from members of the pro-Trump "Trump Train" Sunday evening in Richmond.

RICHMOND — A convoy backing President Donald Trump was blocked by protesters as it tried to round the Robert E. Lee monument in Richmond on Sunday afternoon.

The monument’s protesters stood in the road stopping the procession in support of the president. The cars and trucks of the convoy, adorned with Trump flags and stickers, pulled up to the roundabout where the statue stands on Monument Avenue.

The monument has become the center of protests against police use of force in the months since the death of George Floyd, a Black man killed in police custody in Minneapolis. Supporters of the Black Lives Matter movement frequently spend time there.

Tensions quickly rose on Sunday as the vehicles came to a stop, with a few of the monument’s protesters traveling down the halted rows of cars and trucks being aggressive toward drivers and vehicles.

A bang rang out during the commotion, and two protesters said it was a gunshot.

This was not the first time Hunt has been hit at the square during a bout of civil unrest. Hunt said he was struck by a rubber bullet while protesting at the monument on June 26.

He said other members of the Trump convoy said they did not fire a shot and did not think the loud bang was from a gunshot. He said a person he knows who lives by the monument said the source of the bang was a car backfiring.

Dickinson also said if someone in the convoy did fire a shot, it could have been because the members of the pro-Trump convoy had been scared by the aggressive actions of protesters. The protesters brandished weapons to drivers and passengers, damaged cars and ripped away Trump flags, he said.

“We were attacked violently,” Dickinson said.

He said Richmond Mayor Levar Stoney has allowed the protests around the monument to spiral out of control.

“As you could see today, we have a culture of lawlessness and mob attack mentality,” Dickinson said. “It’s ridiculous that in the city of Richmond, you can’t drive down our roads without having people throw bottles at you and attack your vehicle and be violent towards you.”

Hunt said he had been hanging out at the monument Sunday before the pro-Trump convoy arrived.

Hunt declined to comment if he was taking flags from the convoy when he said he was fired at.

Hunt and another protester, Robert, who goes by “Rus” and declined to give his last name, said the shot was fired from a handgun at Hunt from a newer model, white BMW SUV.

Robert said he knew it was a BMW because he loves the German car company and himself drives a blue X7 model — a similar model to the kind of vehicle the shot was fired from, according to him.

Several monument protesters followed the SUV as it drove onto the grassy road divider and headed back the way it came. Other vehicles in the Trump convoy also peeled out in a similar manner, leaving the stopped traffic a mixture of pro-Trump drivers and other travelers.

After the last of the vehicles of the pro-Trump convoy had left the area, other cars and SUVs started to fill the roundabout and delay traffic. This time, they were driven by people who were shouting in support of Democratic presidential nominee Joe Biden and anti-Trump slogans and phrases.

The police presence grew again as law enforcement shut down the roads leading to the area again, and the pro-Biden and anti-Trump drivers left. Protesters remained that evening.

Hunt was seen by Richmond EMS staff, but was released and remained at the monument, joining the other protesters. He said police told him they were investigating the matter, but they did not have him fill out a formal report.

“To the driver, to the passengers, to everybody who tried to kill me, I forgive you, but I’ll never forget it,” Hunt said.

Munro is a good reporter and photographer, but earns a zero on headlines.

"Hot Wheels and Hooligans: Tempers Rupture on the Mean Streets of Richmond"

I voted no on amendment 1. It seems a step back, like putting the decision in the back room for the "powers-that-be." Plus, the supreme court should not be charged with drawing district lines.

All of these lawless Demokkkrat rioters should be arrested and thrown into prison, where they should remain until they can learn to behave.