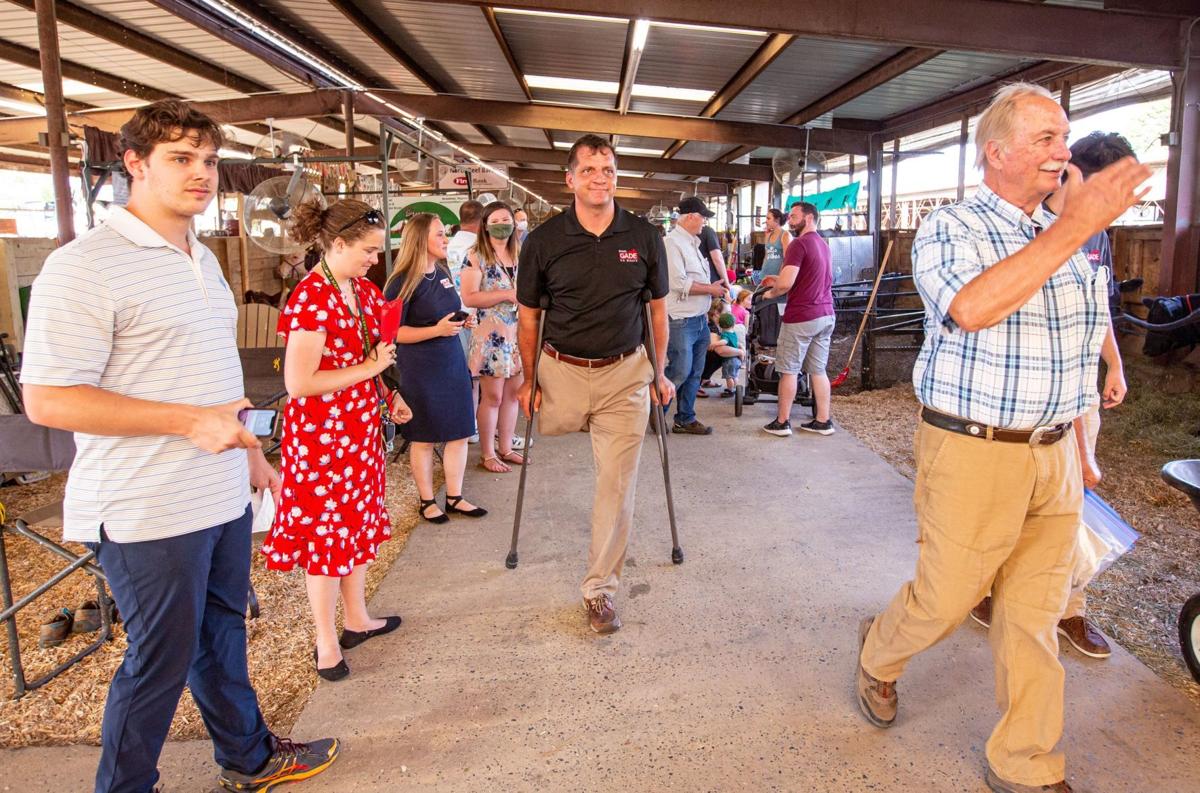 U.S. Senate Republican candidate Daniel Gade walks through a barn at the Rockingham County Fairgrounds during a meet-and-greet Tuesday. 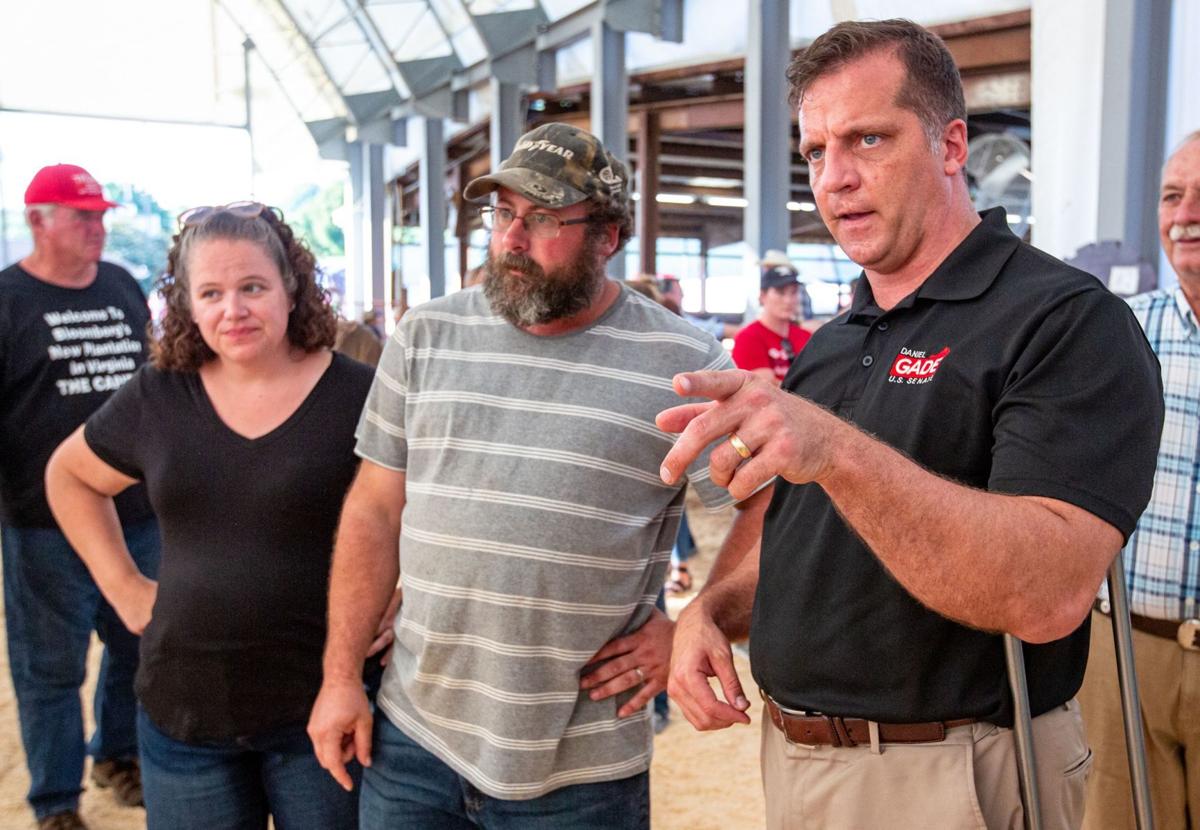 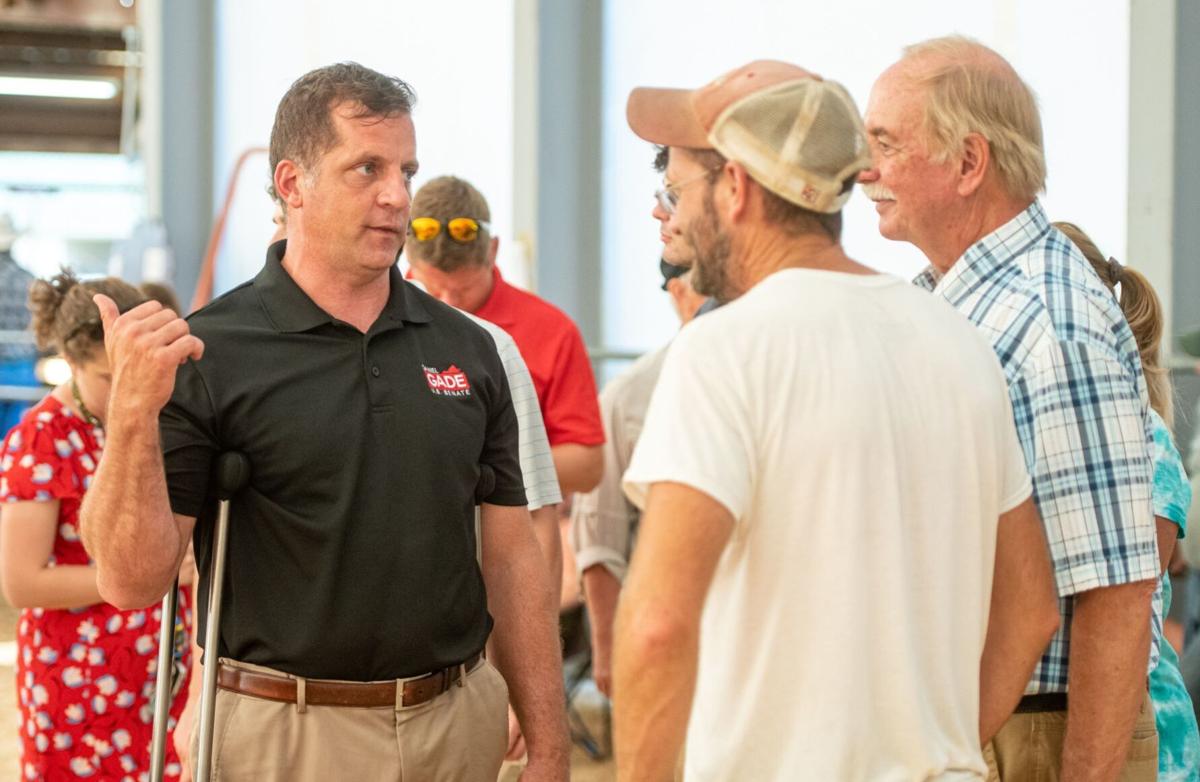 U.S. Senate Republican candidate Daniel Gade walks through a barn at the Rockingham County Fairgrounds during a meet-and-greet Tuesday.

Republican Senate candidate Daniel Gade, who grew up on a small farm in North Dakota, found himself in familiar surroundings while at the Rockingham County Fairgrounds Tuesday as he met and spoke with voters.

“I grew up showing sheep. I grew up doing 4-H, so this is like coming home for me,” the Fairfax Army veteran and university professor said outside an animal show area at the fairgrounds south of Harrisonburg.

Gade is running against two-term incumbent Democratic Sen. Mark Warner and campaigning across the commonwealth before the November election.

One voter Gade met at the fair was Penn Laird resident Deb Medlin.

“I think he’s a great American,” she said. “He sacrificed and lost a leg for love of his country.”

In 2005, Gade was injured by an improvised explosive device while deployed in Iraq, and 25 other service members donated blood to help save his life.

“America is an idea, and I believe [Gade] stands for that idea,” Medlin said.

She said some of the biggest issues for her in the upcoming election are illegal immigration and the protection of the Second Amendment.

“These people are working together as Americans to make their communities better, and they don’t care about what happens in Richmond and Washington, D.C., except for when it interferes with their lives,” Gade said. “So I want to be part helping government get out of their lives so they can thrive on their own terms. That’s what this is all about.”

Gade said the COVID-19 pandemic hit many farmers hard by breaking down supply chains, impacting prices and reducing other sources of income.

“It’s really important to get our economy back up, to get our supply chains working, so that where America is fed, which is on farms, gets to continue to do this hard work,” Gade said.

He said there needs to be a tailored response instead of a blanket response to tackling COVID-19, based on scientific evidence, and a response that accounts for the realities of different communities.

“Knee-jerk government overreach is what caused most of this disruption, not the illness itself, which to be clear is a serious illness that we need to find a vaccine for and be careful with vulnerable people and so forth,” Gade said.

“Gade will not get as much money as Warner from the PACs but he will make up that with retail campaigning on the ground, and I’ve been with him from Roanoke all the way up here as he’s been meeting people and telling his story,” Cline said.

After meeting voters at the fairgrounds, Cline and Gade each gave a short speech behind the local Republican campaign headquarters on South Main Street, where they met and spoke with voters and other local representatives, including Dels. Tony Wilt, R-Broadway, and Chris Runion, R-Bridgewater.

“My personal thought is if there is anyone that can finally defeat Mark Warner, it is [Daniel Gade],” said Pat Haden, who has supported Republican candidates and policies previously.

Haden said her three biggest priorities in the upcoming election are political corruption, the economy and support of law enforcement.

“There’s bad apples in every barrel and I’m perfectly aware of that, but that’s all I’m going to say,” she added.

Earlier Tuesday, Gade attended a Back the Blue rally in support of law enforcement in Roanoke, one of his many stops across the state that has included parts of Southwest Virginia and a visit to a coal mine.

Thrilled to vote for Gade on Nov. 3. A man who truly has sacrificed for his country unlike Warner and Kaine who are members of the “feather my nest” bunch in DC.

The covid response is easy: Open all businesses, restaurants, bars, education facilities, entertainment venues...and get back to living instead of promoting “slow suicide” to prevent another infection, assuming the latest info is not tainted, inflated and possibly fabricated. Wear your mask and wash your hands—the only “vaccine” at the moment.

My stork was more stark than your stork.

I've met Gade. He is a great guy, and will make a great Senator if he wins. It's going to take a lot of money and a lot of voter support in rural Virginia, however, to beat that liberal devil, Mark Warner in November though.

What better person to represent Va. than a man who has put his life on the line for his country, a man who has never been in any scandal or political corruption. Warner has done literally nothing for Va. but he has certainly used his political career to enhance his own private business and live high on the hog off the backs of hard working Virginians!

Amen to that Dant.