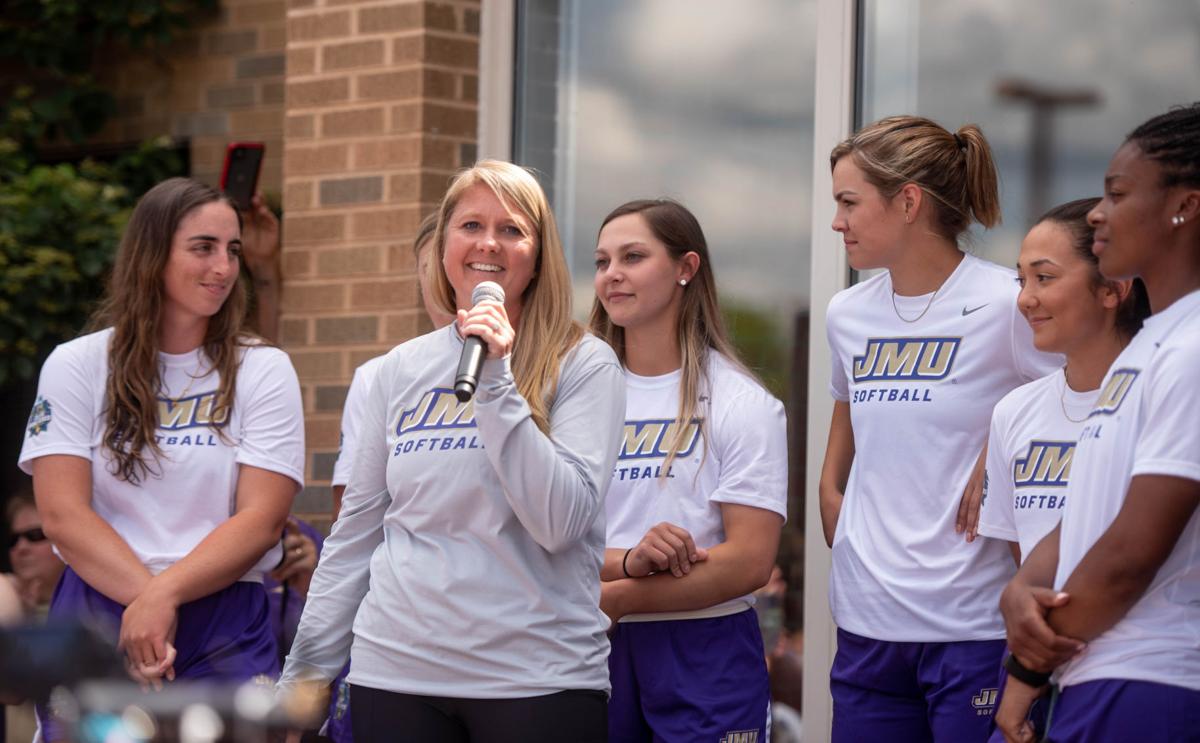 James Madison softball head coach Loren LaPorte and the senior members of the team thank fans in Harrisonburg Tuesday during a ceremony welcoming them back from the Women’s College World Series. LaPorte’s current JMU contract runs through the 2023 season. 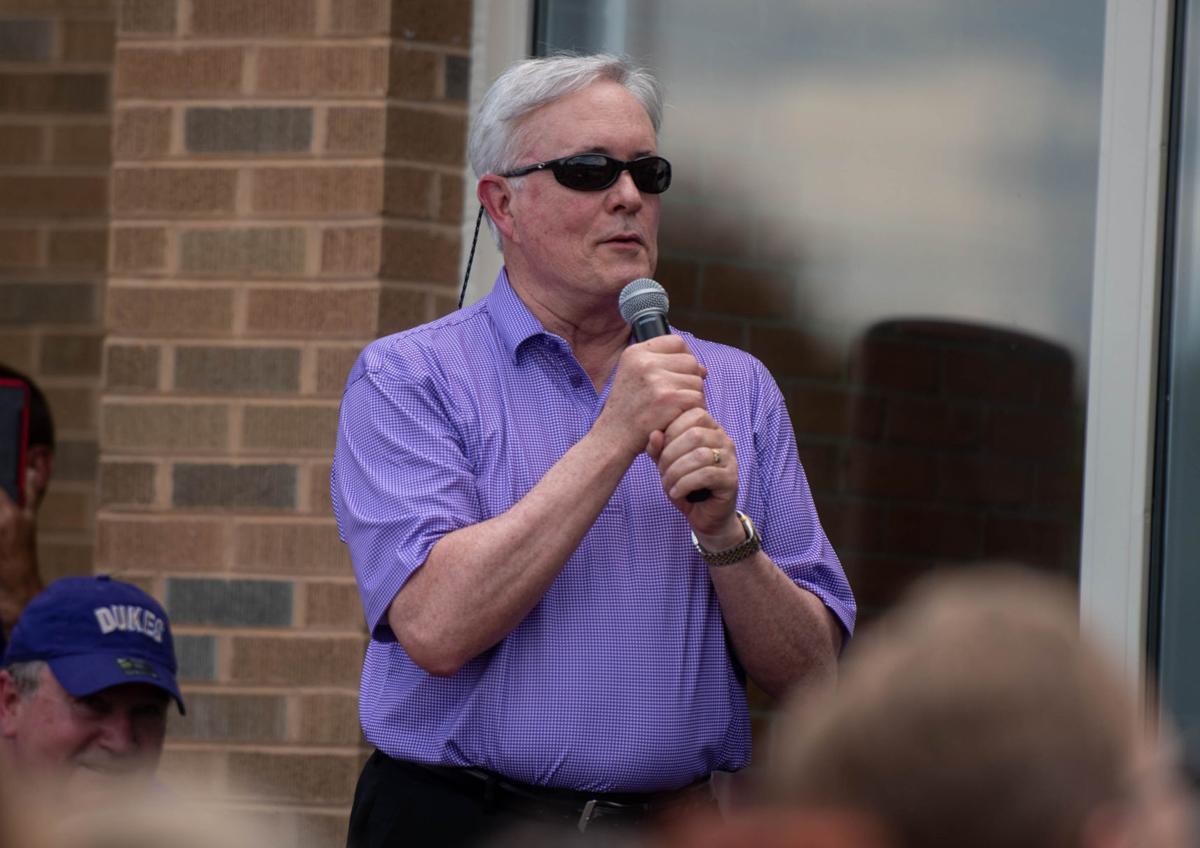 James Madison softball head coach Loren LaPorte and the senior members of the team thank fans in Harrisonburg Tuesday during a ceremony welcoming them back from the Women’s College World Series. LaPorte’s current JMU contract runs through the 2023 season.

Now that James Madison’s historic run to the Women’s College World Series is over, fans of JMU and softball at large can’t help but speculate what’s next for Dukes coach Loren LaPorte.

For her part, LaPorte said this week she’s not trying to use JMU as a stepping stone to a job at a high-major conference school, and that her Virginia roots run deep. LaPorte grew up in Northumberland County and her husband, Josh, is a Shenandoah Valley native from Staunton. Both were athletes at Roanoke College.

“I love JMU,” LaPorte said. “Everybody knows that my family is here. Having that family close by is very, very important for me and my husband and my two kids.”

LaPorte is set to make more than $115,000 this year, including bonuses. That’s on par with some Power Five conference programs, but softball salaries can vary drastically.

Virginia Tech’s Pete D’Amour had the Hokies one victory away from the WCWS this spring. He signed a five-year deal upon his hiring in 2018 with a base salary that averages out to $150,000 per year.

Elkton native Mickey Dean, who preceded LaPorte at JMU, left the Dukes after the 2017 season for a $250,000 salary at Auburn. Oklahoma’s Patty Gasso, who topped JMU last week to earn a spot in the Women’s College World Series championship series, makes more than $1 million a year.

It seems likely LaPorte, who has won more than 81 percent of her games and taken JMU to two Super Regionals, is due for a salary bump and contract extension.

“We will have those discussions,” JMU athletic director Jeff Bourne said. “Whenever mid-major programs have success, it’s almost incumbent it seems that interest on a national level increases. Institutions like ours are all going to do what they can to keep their coaches. I know JMU is fully committed to doing everything we can to keep Loren here as our head coach.”

LaPorte said JMU also provides the Dukes with everything they need to make James Madison a dynastic powerhouse.

“Our facilities are better than a lot of Power Five facilities,” LaPorte said. “The support that our administration and our president gives us, I mean, we couldn’t ask for anything more. And we love the community feel.”

LaPorte and JMU have renegotiated and extended her contract twice since she took over for Dean in 2017 on a one-year deal. In 2018, she signed an extension through 2022 that included an $80,000 base salary, a $5,000 raise from her initial contract. After taking the Dukes to the NCAA Super Regionals in 2019, LaPorte earned another raise, bumping her base salary to $92,500 with an extension through 2023.

JMU’s trip to the WCWS this season and her CAA Coach of the Year award also triggered several performance bonuses totaling $23,197.92.

Beyond coaches salaries, there are plans in the works at JMU to further boost the softball program. A fundraising campaign run during the Women’s College World Series added $50,000 to the softball program’s discretionary fund. LaPorte and her staff can choose to use that money for, among other things, recruiting costs or to pay for JMU to play in high-profile regular-season events.

Additionally, JMU is evaluating potential improvements to Veterans Memorial Park, including enhanced lighting and additional seating, which could make it easier for the Dukes to host Regional and Super Regional games in the future. JMU currently lists capacity at the softball stadium at 625.

“The softball facility being relatively new and pretty much totally redone a few years ago is in great shape,” Bourne said. “When you look at hosting, at least at where things are at this day and time on a national scale, we have to at least consider the lighting component. That’s something that over the last few years has seemed to be even more prominent. And of course the seating volume issue. If you are trying to host tournaments, then you have to look at the potential to add not just to your permanent facility, but then you have to think about what additional rental bleachers and things would need to look like.”

Bourne said campus wide, the school is working to capitalize on the exposure that has come from national television coverage of this spring’s postseason runs by the softball, lacrosse and football teams.

“As an institution, we’re going to publicly acknowledge and use the energy that’s been created by our softball program to benefit and showcase the entire university,” Bourne said. “We realize the value of having the JMU brand and what it means throughout the entire country.”