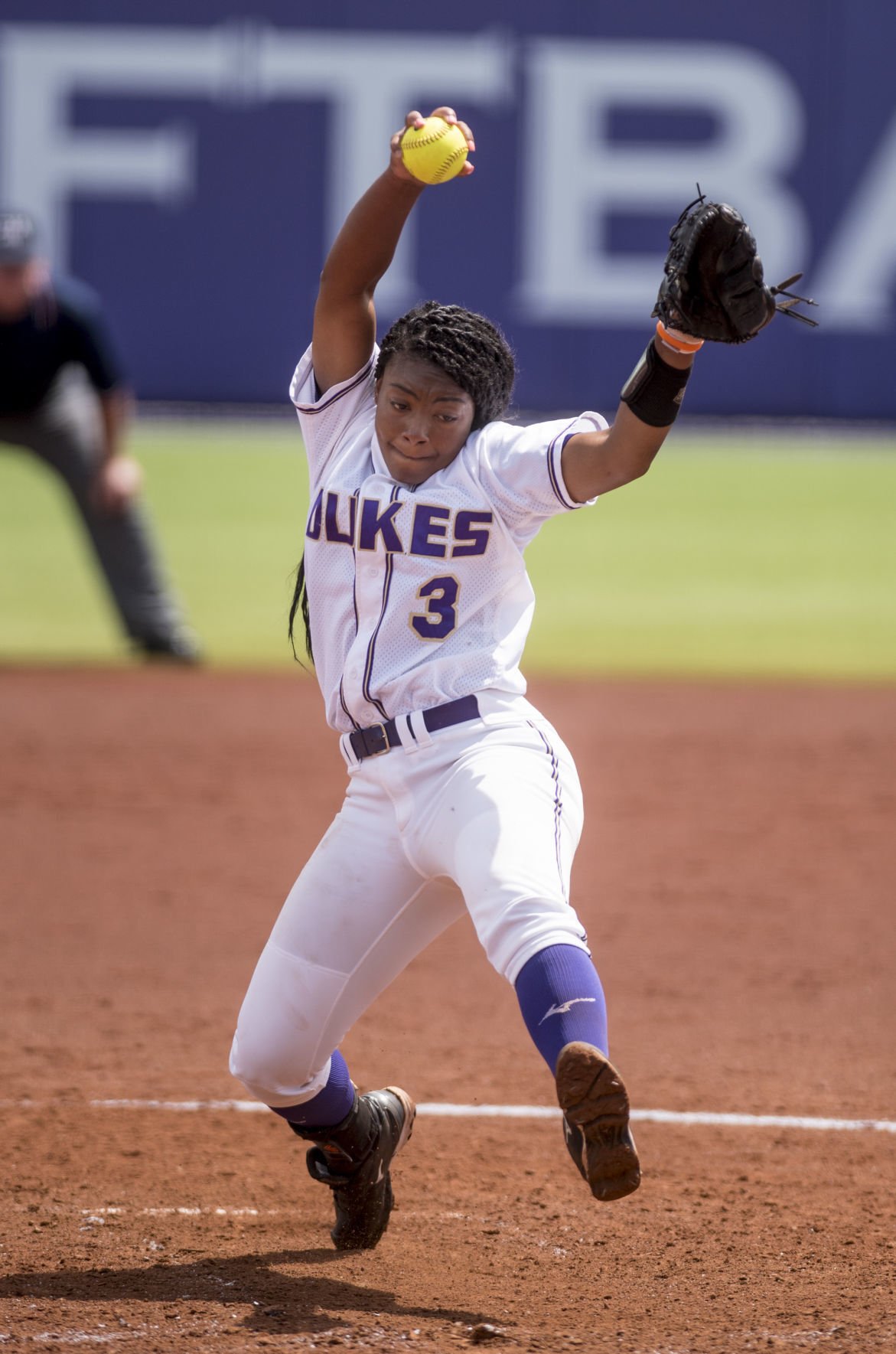 James Madison’s Odicci Alexander allowed only one hit over the course of two games at Charleston this weekend. She also added a pair of home runs at the plate as the Dukes winning streak reached 20 games. 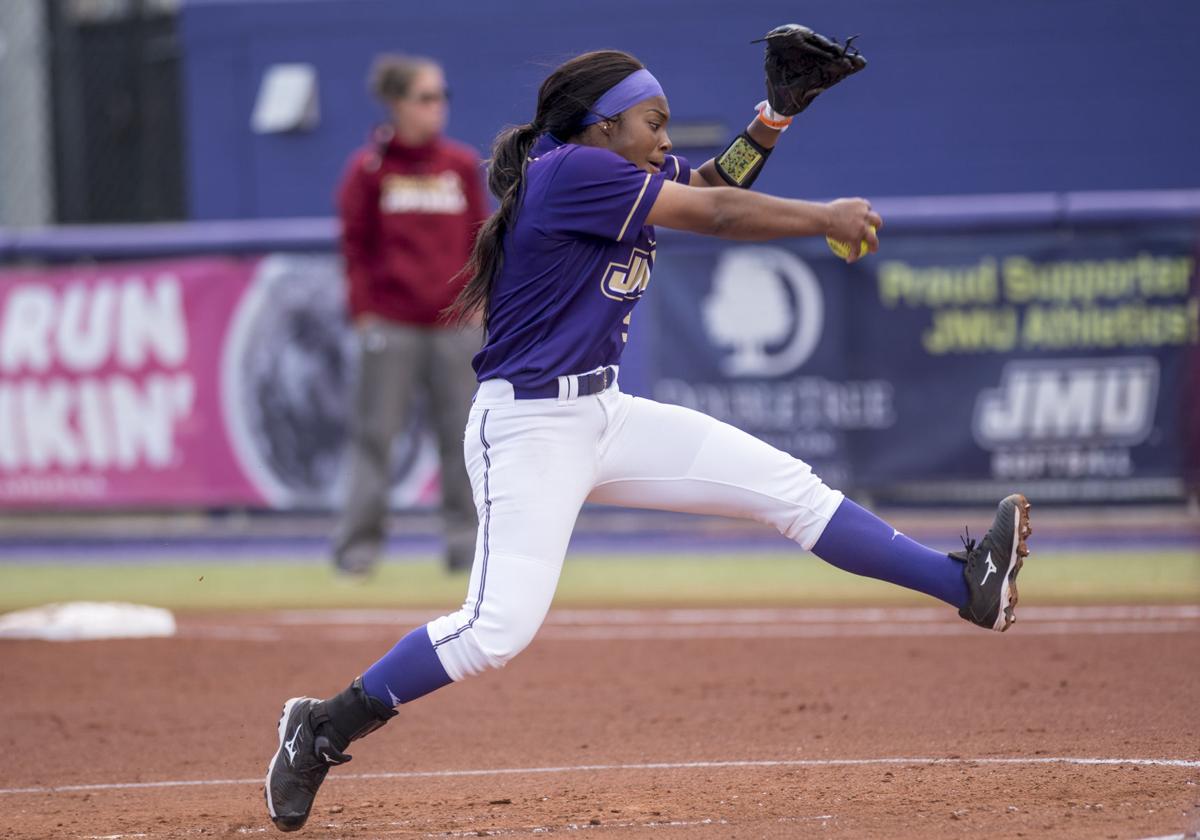 James Madison junior Odicci Alexander is a two-time CAA Player of the Year, but missed a month in the middle of the season with a hamstring injury. She’s been dominant for the Dukes since her return.

James Madison’s Odicci Alexander allowed only one hit over the course of two games at Charleston this weekend. She also added a pair of home runs at the plate as the Dukes winning streak reached 20 games.

James Madison junior Odicci Alexander is a two-time CAA Player of the Year, but missed a month in the middle of the season with a hamstring injury. She’s been dominant for the Dukes since her return.

James Madison was so dominant during early stretches of the softball season, it was almost easy to forget the Dukes had one of the best players in Colonial Athletic Association history sidelined with an injury.

But since returning to the JMU lineup, the name Odicci Alexander is not slipping anybody’s mind. The two-time CAA Player of the Year, who also earned third-team All-American honors as a sophomore and junior, chose to return to school for a fifth year after the 2020 season was halted by COVID-19.

The Dukes (30-1, 17-1 CAA) play their regular-season finale at 4 p.m Wednesday against Charlotte at Veteran’s Memorial Park.

“I am not ready for the season to end, but I am excited to get into the postseason,” Alexander said. “I’m feeling good now. It stunk to miss those games because nobody wants to sit on the sideline and watch, but I feel good with our starting nine and our pitching staff. Moving forward to the postseason I think we’ll be alright.”

Alexander missed a month in the middle of the season, but the Dukes kept winning. Since her return, JMU has swept Elon, avenging their only loss, and been dominant in continuing a winning streak that is now up to 20 games.

The past weekend at College of Charleston, Alexander pitched a perfect game on Saturday and followed it up with a one-hitter on Sunday. At the plate she belted a pair of home runs, including a grand slam.

In all, Alexander has been in the JMU lineup for 15 games, nine of those getting the start in the pitcher’s circle where she’s 9-0 with a 0.82 ERA. She’s also hitting .317 with five extra-base hits and 14 walks in just 41 at bats.

Alexander’s return leaves the Dukes with three pitchers, including Alissa Humphrey and Alexis Bermudez, who have all worked at least 56 innings with an ERA of 2.13 or better.

“I think it really helps the team knowing in the back of their minds we’re going to go [into the postseason] fully loaded,” JMU coach Loren LaPorte said. “It helps to have a little bit of breathing room with depth in the pitching circle.”

There were times after Alexander pulled her hamstring against Stony Brook in mid-March that the Dukes weren’t sure what they’d get from her the rest of the way. The JMU training staff reevaluated the injury each week without setting a timetable for return.

“The team never even really knew if she was going to be back or not,” LaPorte said. “But the rehab went really well. She missed a lot of her senior season, but as a fifth-year senior with players she’s been with for a long time, she really wanted to come back. Being a hitter as well, sometimes that can take a toll on you as well. She’s one of our big-time hitters as well and when she hit that first home run against Charleston, it just kind of changed everything.”

Alexander earned the CAA Player of the Week award — and when the conference tournament begins May 12 in Harrisonburg the Dukes will be the top seed. After that, the NCAA regionals await.

“When I was out, I was just trying to focus on getting back healthy for the future,” Alexander said. “I did want to be back, but it wasn’t something to rush because I wanted to be for sure healthy and 100 percent for this.”