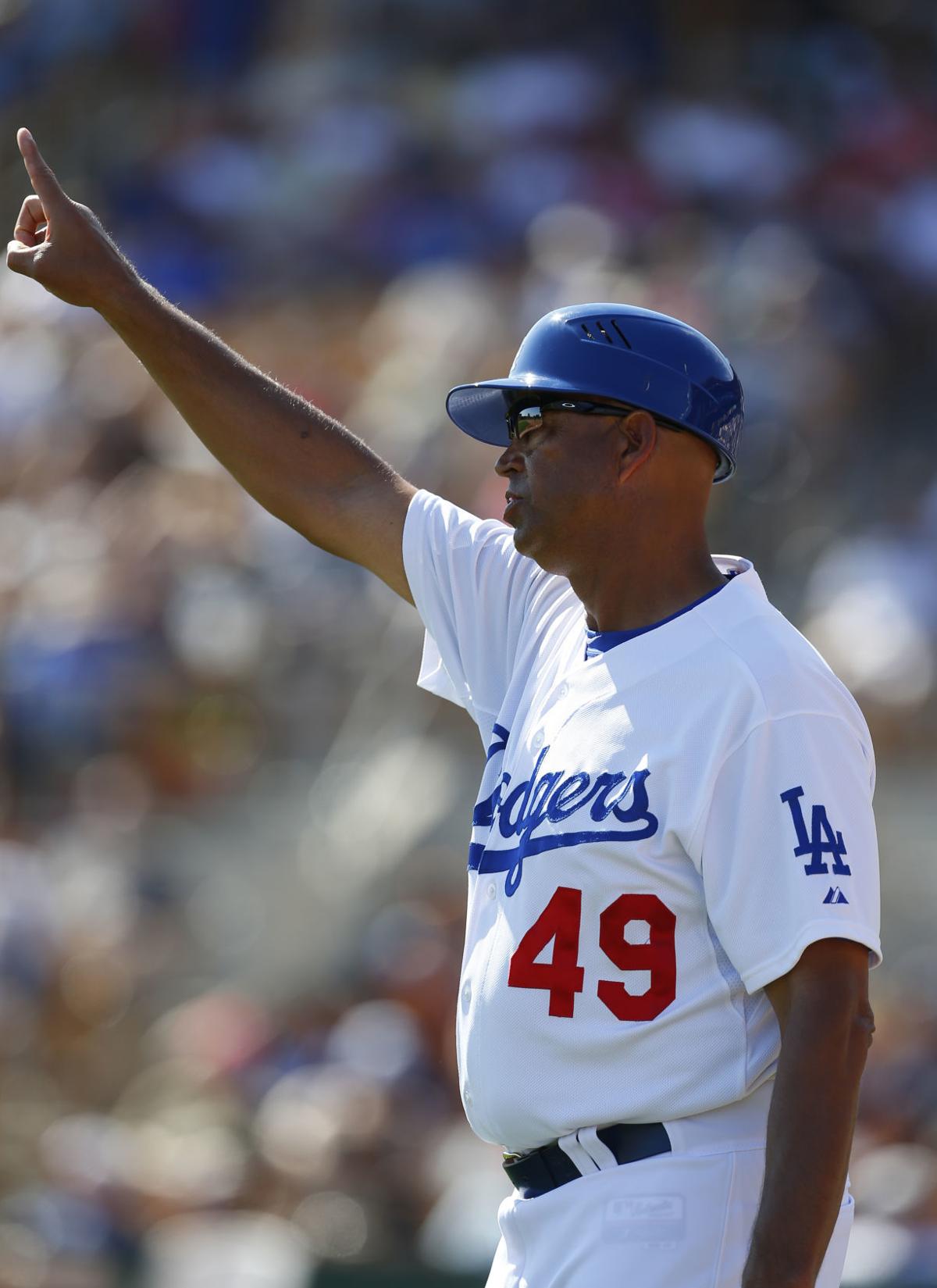 Former Los Angeles Dodgers third base coach Lorenzo Bundy, a James Madison alum who is now the manager of Double-A Binghamton, signals a base runner during a 2014 game. 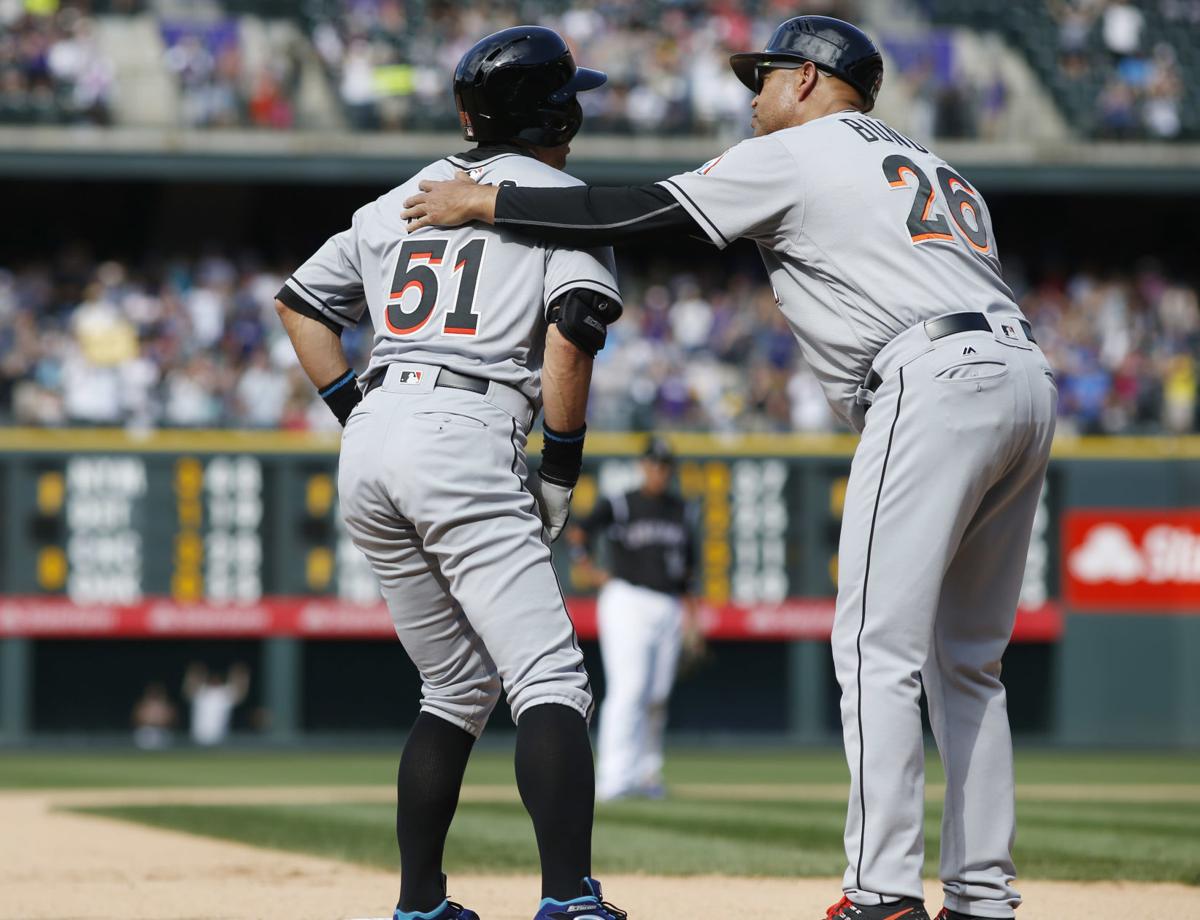 Former Miami Marlins' Ichiro Suzuki, left, is congratulated by third base coach Lorenzo Bundy after hitting a triple in the seventh inning of a baseball game against the Colorado Rockies in August of 2016 in Denver. Bundy, a James Madison alum, is now the manager of Double-A Binghamton.

Former Los Angeles Dodgers third base coach Lorenzo Bundy, a James Madison alum who is now the manager of Double-A Binghamton, signals a base runner during a 2014 game.

Former Miami Marlins' Ichiro Suzuki, left, is congratulated by third base coach Lorenzo Bundy after hitting a triple in the seventh inning of a baseball game against the Colorado Rockies in August of 2016 in Denver. Bundy, a James Madison alum, is now the manager of Double-A Binghamton.

He’s worked for Jim Leyland and Don Mattingly, but also was a casualty of Derek Jeter’s ownership group buying the Miami Marlins.

“I had a tough time getting a job stateside,” Bundy, who was named manager of the Double-A Binghamton Rumble Ponies last month, told the Daily News-Record by phone from Port St. Lucie, Fla., earlier this week.

Binghamton is the Eastern League club of the New York Mets.

“A really humbling experience,” Bundy, a coaching veteran of more than 30 years, said, “and kind of frustrating, to be honest, with my experience. I understand the business of a Major League job, that’s really tough to get, but I thought I’d really have a lot to offer a Minor League organization.”

Since the Jeter-run Marlins didn’t renew Bundy’s contract after the 2017 campaign, he found work elsewhere managing in the Mexican summer league before latching on as hitting coach for the Mexican national team. Bundy said he was with Team Mexico through the Premier12 event in Tokyo, Japan, where Mexico qualified for the 2020 Olympics this past fall.

But even while the former member of the Dukes was out of the country, he continued networking with all the contacts in Major League Baseball he accumulated from his decades in the business, he said.

“So I get back from Tokyo,” Bundy said. “I’m home for like 12 hours and then I’m on a flight to New York to interview for this Double-A manager job.”

By hiring Bundy, the Mets clearly believed in the value Bundy thought he could bring to their farm system.

Across his 30-plus years of coaching, he’s spent part of eight Major League seasons with the Marlins, Colorado Rockies, Arizona Diamondbacks, and Los Angeles Dodgers. Bundy managed in Triple-A with the Albuquerque Isotopes and was tabbed as Pacific Coast League Manager of the Year in 2012, too, among other gigs he had in Minor League Baseball.

Over the next few weeks, Bundy will be in New York’s Major League camp meeting with the front office personnel and coaches throughout the organization.

Mets pitchers and catchers arrived in Southeast Florida on Monday.

Bundy said first-year Mets manager Luis Rojas, who spent 13 years in the franchise’s minor league system before becoming quality control coach at the big-league level last year and being promoted to the role of New York skipper this offseason, wants continuity from the lowest levels of the system all the way through the big leagues.

“What could be different is the signs for a bunt defense or a first-and-third defense, but the play itself won’t, and that makes it a whole lot easier for the young player to make that adjustment. So the big thing Luis is trying to establish now is that everyone is on the same page.”

Bundy said his knowledge of Major League Baseball and Minor League Baseball should only assist his players in their development. The Mets’ top prospect, shortstop Ronny Mauricio, could be ticketed for Double-A at some point this year, after hitting .268 at full-season Single-A Columbia in 2019.

The now Double-A manager, Bundy, played at JMU for former longtime Dukes coach Brad Babcock, still has his name littered across the school’s record book and added his life journey in baseball is something minor leaguers can relate to.

Bundy, who said he still talks with Babcock over the phone, is in the top 10 in JMU history for slugging percentage (.638), on-base percentage (.471), triples (10) and home runs (36), but went undrafted out of college before signing with the Texas Rangers and having stints in minors with the Rangers, Expos and Pittsburgh Pirates without ever reaching the big leagues. He’s since coached at all levels of the sport and in various roles, too, having served as bullpen coach, outfield coach, third-base coach, first-base coach and bench coach during different stops of his career.

“And I still have those aspirations to continue to teach,” Bundy said. “And continue to help players, help develop players and make them the best players they can be. Hopefully into Major League players.”

For now, though, Bundy is eager to be back in the Grapefruit League and hands-on with those in Mets camp already until minor leaguers arrive early next month. He said he has meetings with other members of the organization regarding minor-league player placement scheduled for the coming days.

"Lo is a good baseball man who has been all over the place and has done about everything. He is a guy you can count on. He is not going to panic. He is loyal," Mattingly told the DN-R in 2017.

New York finished 86-76 and missed out on the postseason last year in spite of another Cy Young Award-winning season from ace Jacob deGrom and a Rookie of the Year-winning campaign from first baseman Pete Alonso.

“It’ll be good to see the guys we have,” Bundy said. “Our Major League roster is talented and I think we really have a chance if we stay healthy especially with the development of the young guys like [outfielder Michael] Conforto, [third baseman Jeff] McNeil and the shortstop [Amed] Rosario. … It’s a good team.”