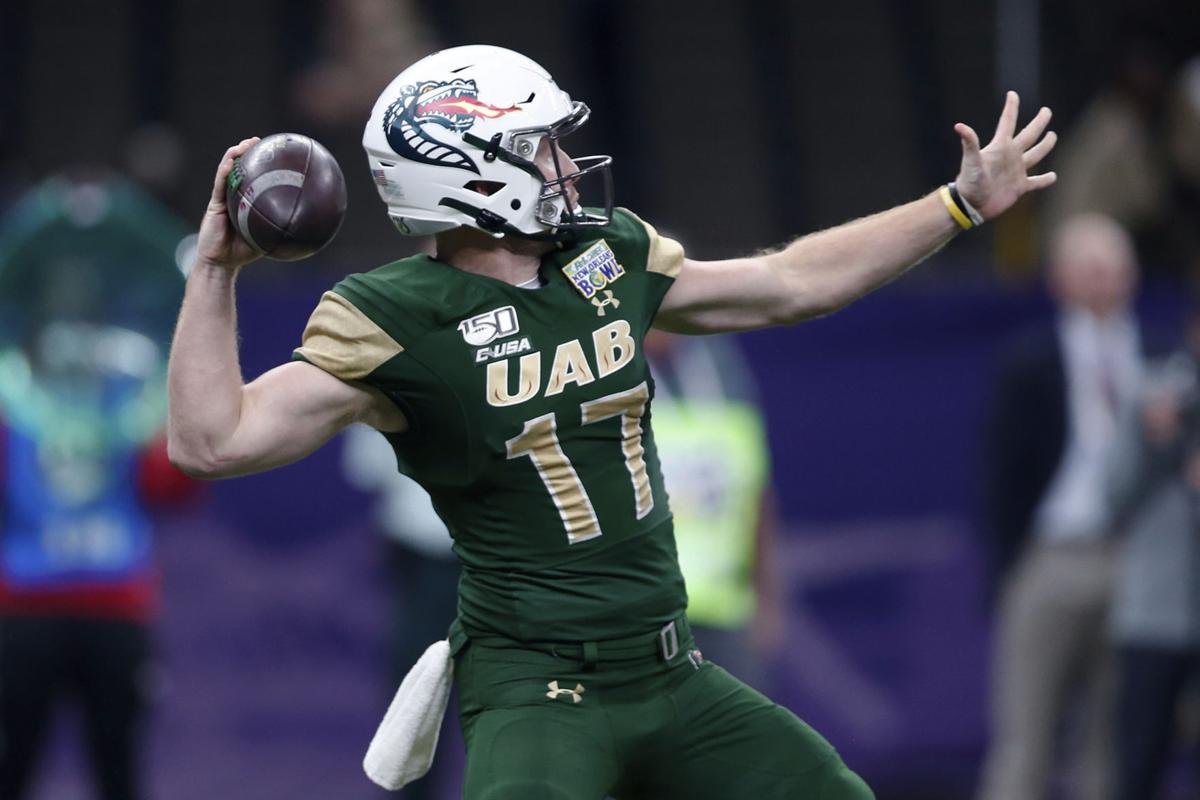 UAB quarterback Tyler Johnston III throws a pass during the first half of the New Orleans Bowl against Appalachian State earlier this month. Johnston has over 4,800 career passing yards. 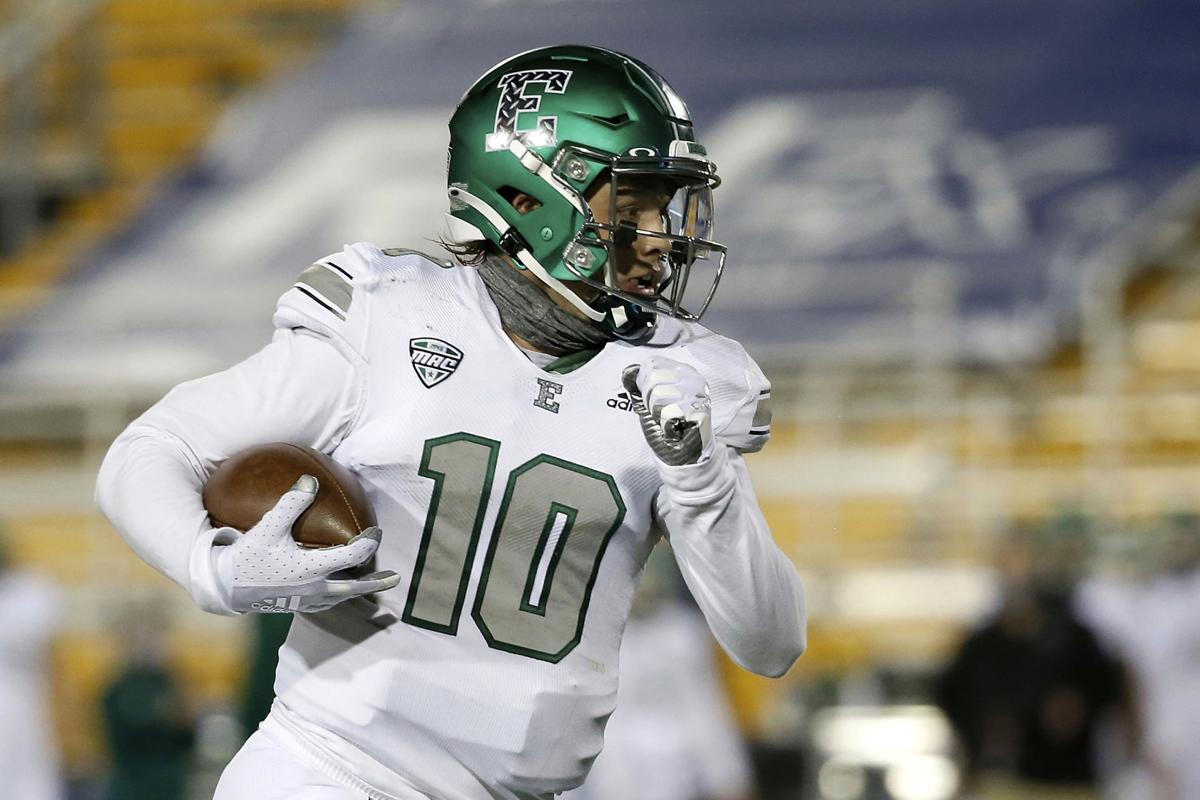 Eastern Michigan quarterback Preston Hutchinson (10) carries the ball during a game against Kent State in 2020. Hutchinson holds a JMU offer.

UAB quarterback Tyler Johnston III throws a pass during the first half of the New Orleans Bowl against Appalachian State earlier this month. Johnston has over 4,800 career passing yards.

Eastern Michigan quarterback Preston Hutchinson (10) carries the ball during a game against Kent State in 2020. Hutchinson holds a JMU offer.

As James Madison’s season came to a close, the program turned the page on its time in the FCS and began readying for its move to the FBS next season.

JMU head Coach Curt Cignetti has been busy, offering many transfers since the team’s loss to North Dakota State two weeks ago. One position Cignetti is looking to bolster? Quarterback.

The Dukes will only have three quarterbacks on the roster from this past season after redshirt freshman Kyle Adams entered his name into the transfer portal and starter Cole Johnson is set to graduate.

That leaves JMU with redshirt junior Patrick Bentley, along with freshmen Billy Atkins and Clay Vance. Bentley and Atkins have combined to appear in nine games, passing for 89 yards and two touchdowns at JMU. Vance redshirted this season to retain a year of eligibility.

Cignetti did add a quarterback during the early signing period earlier this month when Alonza Barnett III inked his NLI.

After Johnson’s success as a more experienced signal-caller this season, it’s possible Cignetti may look to add a quarterback with experience at the FBS level to help ease the Dukes’ transition.

Here are five names in the transfer portal to keep an eye on:

Johnston, a proven FBS quarterback, announced his transfer from UAB on Dec. 6 after going 15-6 as a starting quarterback, including two Conference USA titles.

The Spanish Fort, Alabama native is seeking a place to use his sixth year of eligibility next season. Johnston only appeared in six games this season, but was replaced by Dylan Hopkins.

Johnston finished his UAB career with more than 4,800 passing yards, 37 touchdowns and averaged nine yards per passing attempt. During his bowl debut at the Cheribundi Boca Raton Bowl in 2018, Johnston threw for 373 yards and four touchdown passes.

The 6-foot-2, 215 pound signal-caller was a decorated player coming out of Spanish Fort High School, going 35-0 as a starting quarterback and winning two state titles.

Johnston missed his junior season with a torn ACL, but returned and led the Toros to a state championship. Johnston finished his prep career with more than 8,300 passing yards, 83 passing touchdowns and over 1,200 rushing yards.

Centeio, a former Temple and Colorado quarterback, announced that he had received an offer from JMU on Monday afternoon.

From West Palm Beach, Florida, Centelo was the go-to quarterback for the Rams this season, appearing in 12 games while throwing for almost 3,000 yards and 15 touchdowns. His transfer comes after Colorado State head coach Steve Addazio was fired and Nevada’s Jay Norvell was hired.

Centeio can use his legs, too, as he rushed for 439 yards on 131 carries and two touchdowns this season. He will have one year of eligibility remaining to use at his next destination.

Brown, the 2020 Lending Tree Bowl MVP, entered his name in the transfer portal after being replaced as the starting quarterback four games into the season.

Brown threw for more than 2,200 passing yards in the campaign, accounting for 24 total touchdowns. He was named Sun Belt Offensive Player of the Week (Nov. 9, 2020) after he logged a four-touchdown performance in a 52-34 win over Louisiana-Monroe.

The Birmingham, Alabama product was ranked the No. 5 quarterback in his home state in the class of 2018 by 247Sports. Brown threw for more than 2,300 yards and 25 touchdowns during his junior season and added 1,600 yards and 16 scores in his senior campaign.

Brown only played in one full season with the Panthers, appearing in three games in his freshman season and four games during his redshirt sophomore year. He has three years of eligibility remaining.

Hutchinson tweeted that JMU offered him a transfer destination on Sunday.

The Mason, Ohio native started all six games during last season’s COVID-19 shortened campaign. He logged just over 1,600 passing yards and 12 touchdowns during the 2020 season, including a four-touchdown game against Toledo.

Hutchinson appeared in eight games this season, making only 40 pass attempts for 216 yards and one touchdown, his fewest passing yards in a season since 2018.

Hutchinson has one year of eligibility remaining.

Siderman, the lone FCS signal caller on the list, split time at quarterback with Matthew Sluka this season at Holy Cross but appeared in all 13 games.

Siderman was the backup, but threw for just over 1,000 yards and eight touchdowns, while Sluka logged over 1,500 passing yards and 11 touchdowns.

The 6-foot-2 quarterback appeared in both of Holy Cross’ two FCS playoff games this season, but in a limited role.

Siderman, who is from Agoura Hills, California, rewrote the record books at Westlake High School, including the mark for most total yards as a senior, when he passed for more than 3,500 yards and rushed for 426. He also set single-game passing records for yards (509) and touchdowns (seven) in his final season.