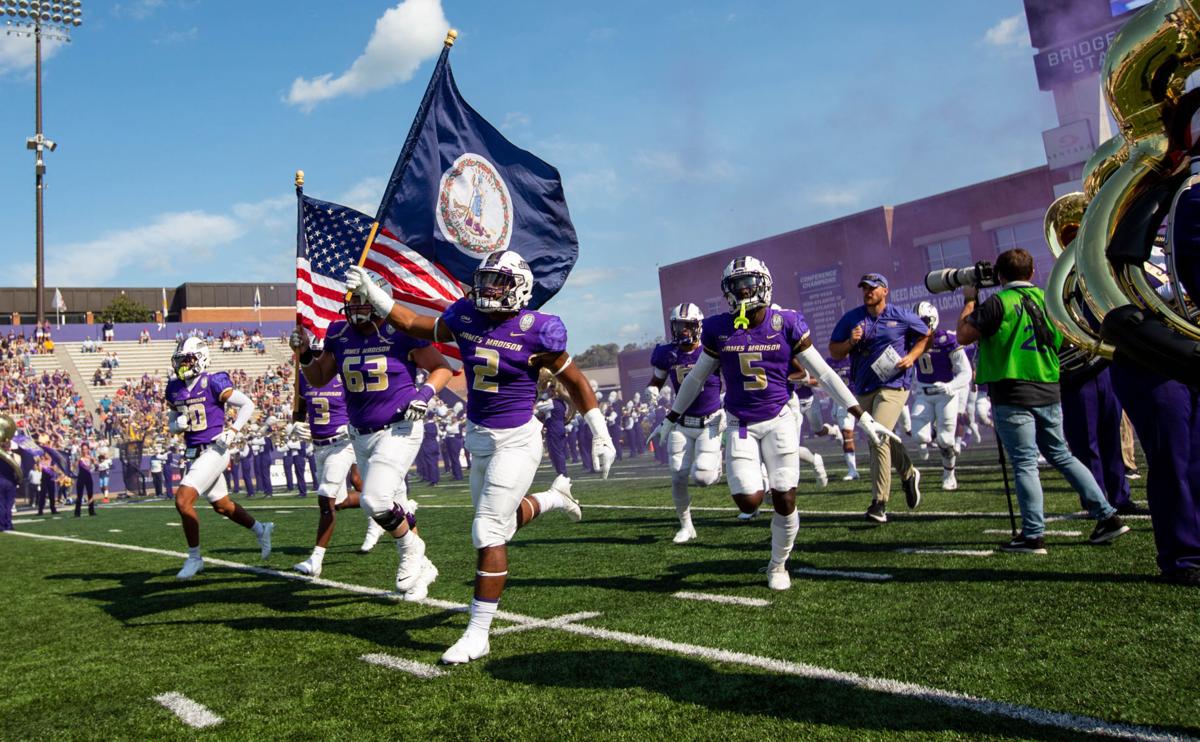 James Madison takes the field before the start of its game against Maine earlier this season at Bridgeforth Stadium. 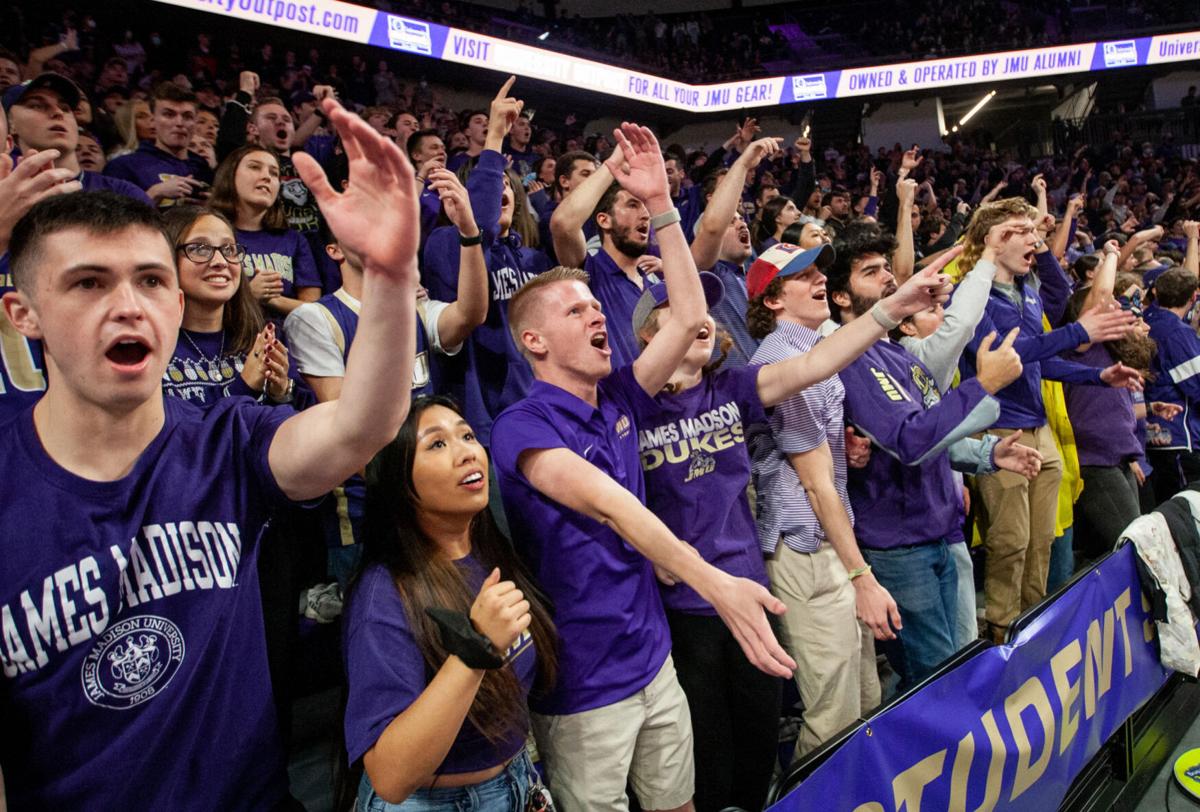 James Madison fans cheer on their team during the first half of a game against Virginia in Harrisonburg earlier this month.

James Madison takes the field before the start of its game against Maine earlier this season at Bridgeforth Stadium.

James Madison fans cheer on their team during the first half of a game against Virginia in Harrisonburg earlier this month.

It was a year of change for James Madison athletics.

Multiple sports were impacted negatively by COVID-19, others were hit by decisions from the Colonial Athletic Association and, most notably, the Dukes made the decision to move up to the FBS and join the Sun Belt Conference.

Through the good and the bad, it was a year to remember for JMU athletics.

Here’s a look at some of the top storylines the Dukes produced this year:

Dukes To The Sun Belt

A process that was at least a decade in the making finally came to fruition in late 2021 as JMU finally announced its decision to move from the Football Championship Subdivision to the Football Bowl Subdivision, leaving its longtime home in the Colonial Athletic Association in the process.

When conference realignment was once again jump started by Texas and Oklahoma leaving the Big 12 for the SEC, the trickle down led to an opportunity for James Madison, a long-time FCS powerhouse, to make a move to the Sun Belt, which has emerged as one of the best Group of 5 FBS leagues in the nation.

Though the Dukes are leaving a league where it was a charter member, the new Sun Belt East Division allows JMU to join regional rivals such as Old Dominion, Marshall and Appalachian State.

Taking OKC, The Nation By Storm

For a couple weeks in the late spring, JMU’s softball program was the country’s favorite underdog story with pitcher Odicci Alexander reaching true superstar status as she led the Dukes to its first Women’s College World Series appearance. After arriving in Oklahoma City, JMU took down hometown favorites Oklahoma and Oklahoma State in its first two games before finishing the season as one of the top four teams in the nation.

In truth, JMU’s rise wasn’t as meteoric as it might have seemed on the outside. The Dukes have been a Top 25 program for years with multiple Super Regional appearances, but the growing popularity of college softball combined with Alexander’s dominance certainly helped boost exposure for both the program and JMU as a whole.

COVID-19 left JMU and most other FCS programs in the unprecedented position of playing two football seasons in the same calendar year. The Dukes played 22 games over a 10-month period, winning 19 of them and making back-to-back appearances in the FCS national semifinals.

But both postseason runs ended in disappointment on the road for Curt Cignetti’s squad. In the spring, JMU built a 24-3 halftime lead at Sam Houston before the Bearkats came storming back in the second half to pull out a 38-35 victory. The fall season saw the Dukes make another trip to North Dakota State, where JMU rallied to take a fourth quarter lead in front of a raucous Fargodome crowd, but the Bison came away with a 20-14 victory denying the Dukes an opportunity for one last FCS crown.

Virginia native Mark Byington came back to the Commonwealth after seven seasons at Georgia Southern to take over the JMU men’s basketball program and made an immediate impact in the 2020-21 season. The Dukes finished dead last in the CAA standings the season before Byington’s arrival, but quickly established themselves as a team to beat in the conference during Byington’s debut.

JMU went 8-2 in an abbreviated CAA season, finishing tied with Northeastern for first place and earning the No. 1 seed in the conference tournament. But CAA Player of the Year Matt Lewis suffered a serious knee injury late in the season and was unavailable for the CAA tourney, where the Dukes made an early exit.

Top ProspectThe exploits of JMU pitcher/outfielder Chase DeLauter will likely make him an even bigger story in 2022, but 2021 established Dukes’ two-way standout as one of the top prospects in the country, who just might be the first pick in next year’s Major League Baseball amateur draft.

DeLauter hit .386 with six home runs in 26 games last spring and also had a 1.23 ERA in 7 ⅓ innings pitched for the Dukes. But he truly established himself as nation’s best college prospect during the summer when he was named the Most Outstanding Pro Prospect of the Cape Cod league, where he hit .298 with nine homers.

Taking Down The CavsThe Dukes waited a long time for an opportunity to play in front of a packed house in the new Atlantic Union Bank Center, and when it finally came about JMU made the most of it. Mark Byington’s team put together one of the most impressive defensive performances in school history on the way to a 52-49 victory against Virginia.

The largest basketball crowd in Harrisonburg history, officially listed at 8,439 fans, stormed the court once JMU’s first ever men’s basketball victory against the Cavaliers was complete. The Dukes followed it up with two more victories to make it a 9-2 start to the season, JMU’s best since the 1986-87 season.

Cole Rewrites Record BookCole Johnson started his JMU career buried on the Dukes’ quarterback depth chart, but the Virginia Beach product stuck with it at James Madison, even coming back for a sixth season after leading the Dukes to a CAA championship and the FCS semifinals in the spring.

The choice turned out to be a big one for both Johnson and the Dukes. He once again took JMU to a conference title and a deep playoff run while putting together one of the best seasons any JMU quarterback has ever produced. Johnson finished with 3,779 yards and 41 touchdowns through the air, both school records, while throwing just four interceptions in 422 passing attempts.

Athletes UniteJMU’s decision to leave the CAA for the Sun Belt came with one downside, the CAA Council of Presidents voted to uphold a bylaw that banned the Dukes’ teams from postseason conference tournaments. The move left the CAA as the only league among 12 Division I conferences impacted by conference realignment to bar a school from tournament play.

JMU athletes sprung into action, protesting on the field at JMU’s homecoming football game and circulating a petition that gained signatures from nearly 1,500 college athletes across the nation, including players from every other CAA school. But the CAA elected not to reverse its decision, effectively preventing several JMU squads from a shot at their sports’ NCAA tournaments.

Lacrosse Run ContinuesThe JMU lacrosse team returned to the national stage in 2021 with its fourth consecutive CAA championship and the Dukes’ sixth straight NCAA Tournament appearance under head coach Shelley Klaes. Both streaks likely would have been extended by another year if not for the premature cancellation of the 2020 season, but JMU proved it wasn’t about to lose national relevance a few years removed from the program’s 2018 national championship.

Goalkeeper Molly Dougherty and defender Emma Johnson each earned All-America honors and the Dukes finished ranked No. 12 in the nation, despite a tough loss to No. 1 North Carolina in the NCAA playoffs.

Disappointing Ends For Volleyball, SoccerThe CAA postseason ban was particularly difficult for the JMU volleyball and men’s soccer teams, which were in the middle of successful seasons when the news came down. The Dukes volleyball squad, which lost with COVID-ravaged roster in the CAA Tournament the previous spring, was neck-and-neck with Towson atop the league standings most of the season before being ruled out.

The men’s soccer program spent most of the fall ranked in the Top 25 and was looking for its fourth straight NCAA Tournament appearance under coach Paul Zazenski, who led the Dukes to the national quarterfinals during his first season in 2018. Without a CAA Tournament opportunity the Dukes failed to earn an at-large bid.