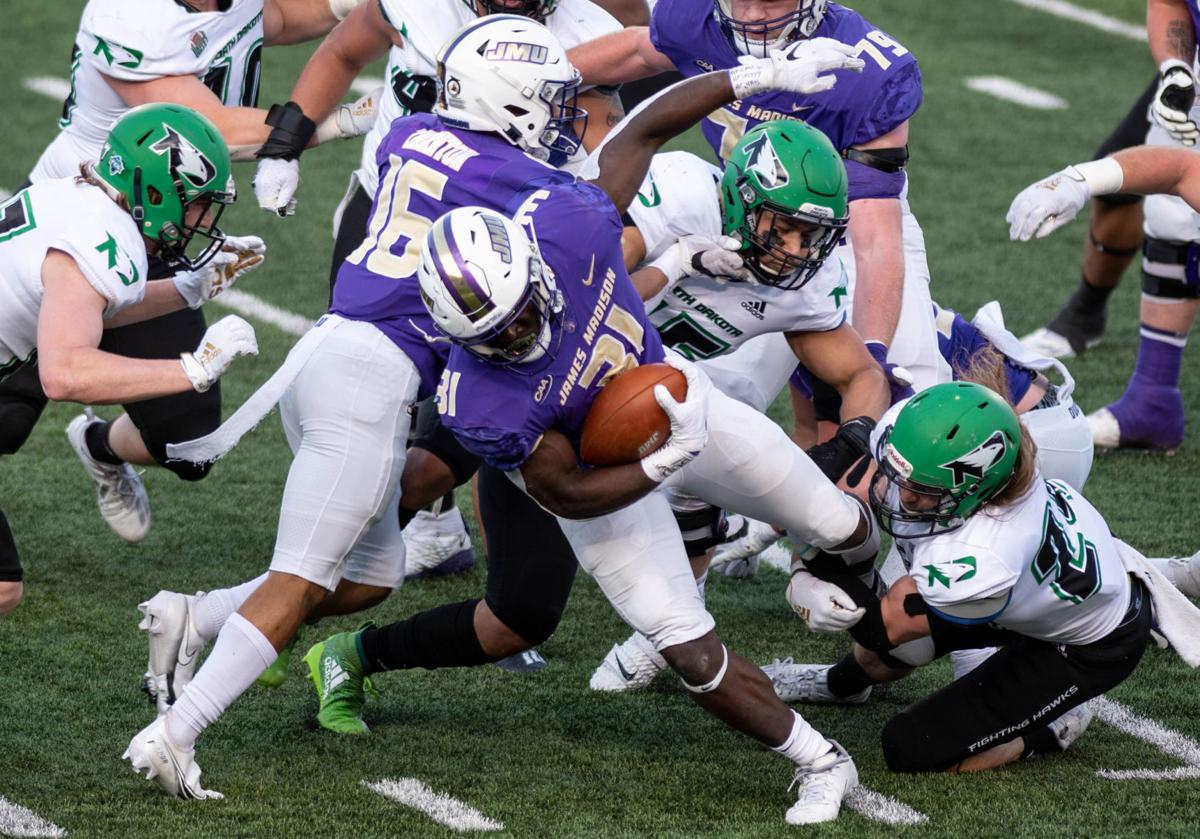 James Madison running back Percy Agyei-Obese (31) bursts out of traffic during the Dukes’ win over North Dakota on Sunday in Harrisonburg. 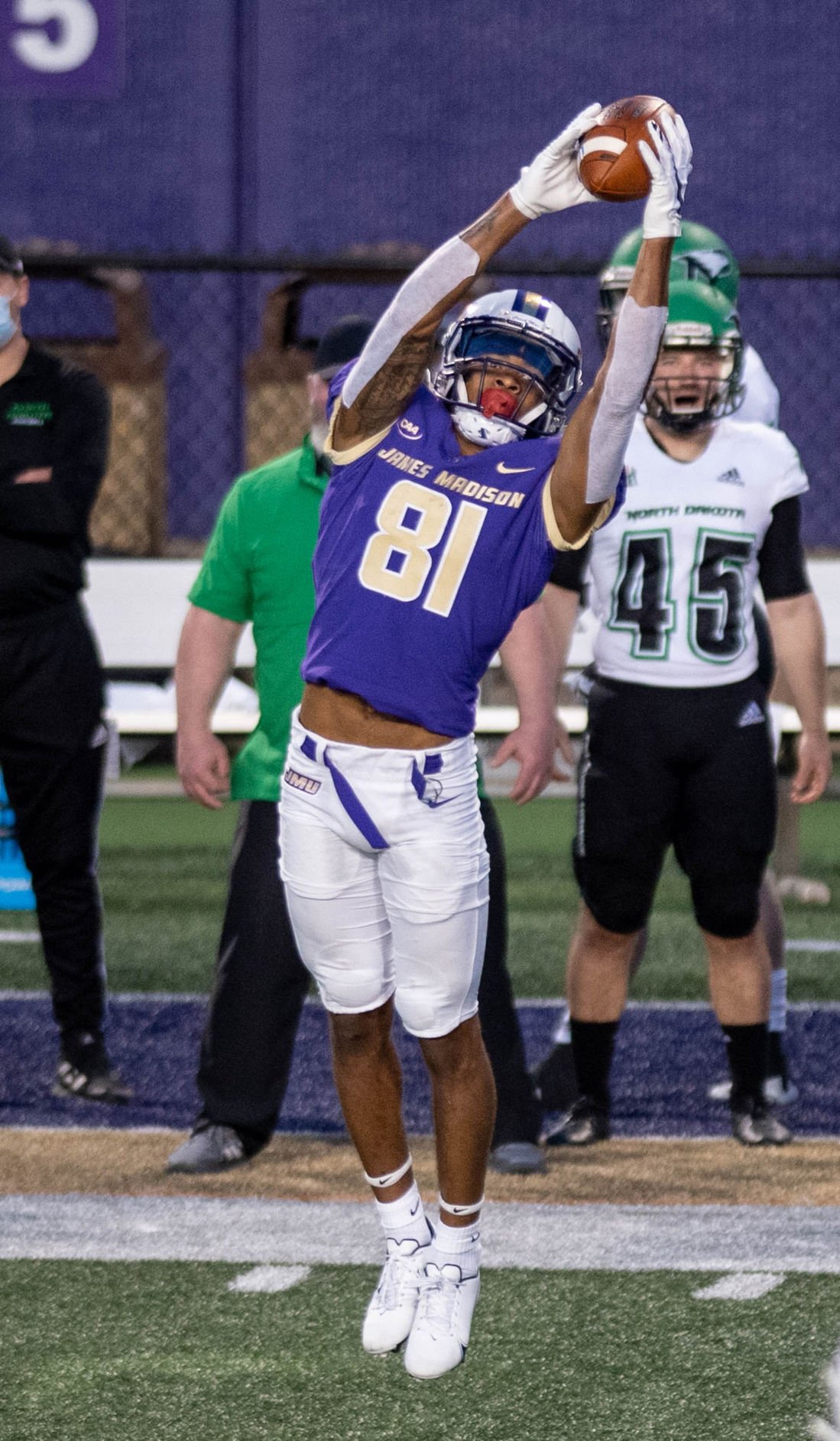 James Madison wide receiver Antwane Wells Jr. (81) reaches for a catch during the Dukes’ win over North Dakota on Sunday at Bridgeforth Stadium. 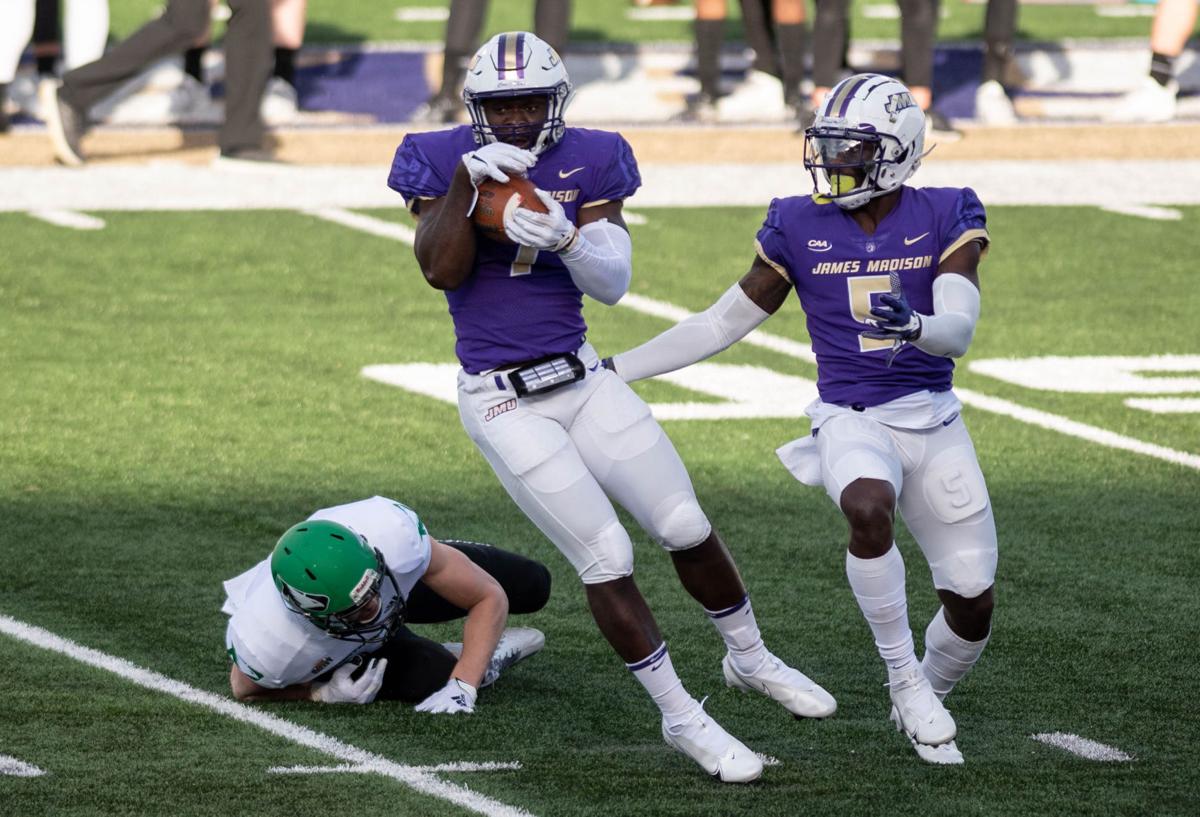 James Madison linebacker Kelvin Azanama (7) grabs an interception out of the air during the Dukes’ win over North Dakota on Sunday.

James Madison running back Percy Agyei-Obese (31) bursts out of traffic during the Dukes’ win over North Dakota on Sunday in Harrisonburg.

James Madison wide receiver Antwane Wells Jr. (81) reaches for a catch during the Dukes’ win over North Dakota on Sunday at Bridgeforth Stadium.

James Madison linebacker Kelvin Azanama (7) grabs an interception out of the air during the Dukes’ win over North Dakota on Sunday.

They had the perfect counter to put an aggressive defense in slow motion.

“When we have the run game going, it makes my job a lot easier,” JMU senior quarterback Cole Johnson said.

Johnson was 14-of-17 and picked apart the opposition for 251 yards and two touchdowns with both scoring throws going to Wells Jr. in the second half when the Dukes (7-0) separated from the Fighting Hawks (5-2) and secured their fourth semifinal appearance in the last five seasons.

JMU will travel this Saturday to face second-seeded Sam Houston State, which topped North Dakota State on Sunday, for the right to go to Frisco, Texas for the national championship game.

“This means a lot to us,” Dukes senior running back Percy Agyei-Obese said about advancing to another semifinal, “just because this year, starting off, we had a young team. We had a lot of new faces, and making it this far shows the dedication and hard work this team has and the chemistry we’ve built.”

And Agyei-Obese, carrying the ball behind his bruising offensive line, was the catalyst and workhorse who derailed North Dakota’s desire to succeed with pressure. Entering Sunday, the Fighting Hawks were averaging 3.67 sacks per game and they had eight sacks in their first-round win the week before.

Agyei-Obese took 27 carries and tallied 128 rushing yards to go along with two touchdowns. One came in the first quarter to push JMU’s advantage from 3-0 to 10-0 and the other occurred in the second quarter to extend the edge to 17-7.

It was his fourth 100-yard rushing performance of the season and second this postseason.

Schweigert said the Dukes, who rushed for 217 yards as a team with other contributions from running backs Solomon Vanhorse, Latrele Palmer and Jawon Hamilton, used their running game to avoid putting themselves in obvious blitzing situations – the ones in which North Dakota thrives on. The Fighting Hawks still sent pressure from the second and third levels of their defense, but those blitzes came in second-and-medium or third-and-short instead of third-and-12 as UND would’ve liked.

Agyei-Obese said he was ready to run against extra defenders.

“Oh yeah,” Agyei-Obese said. “I honestly change my running style depending on the game and who we’re playing. And against a team like this, who was very physical, I’ve got to be a downhill runner or more of a one-cut and go and lower my shoulder more.”

Agyei-Obese’s 28-yard run in the third quarter was part of a drive that finished with Johnson hitting Wells Jr. on a slant before Wells Jr. bounced off a defender and into the end zone for a 19-yard touchdown. He caught his second score on a 63-yard deep ball from Johnson in the final stanza to take a 20-point lead.

“They were bringing the house,” JMU coach Curt Cignetti said, “and we were pushing the ball forward. But what made it all work were the big plays from Cole to Wells. … The big plays in the passing game led to points and momentum swings. The run game was something we needed really bad to keep our defense off the field and get first downs.”

While the Dukes’ offense racked up 468 total yards and dominated time of possession for 37 minutes, when their defense was on the field, it played a pivotal role, too.

JMU senior linebacker Kelvin Azanama notched his first career interception in the first quarter and senior cornerback Wesley McCormick would’ve had an interception return for a touchdown in the second quarter if it wasn’t for pulling his groin during the first few strides of the return and falling to the ground with an open field in front of him.