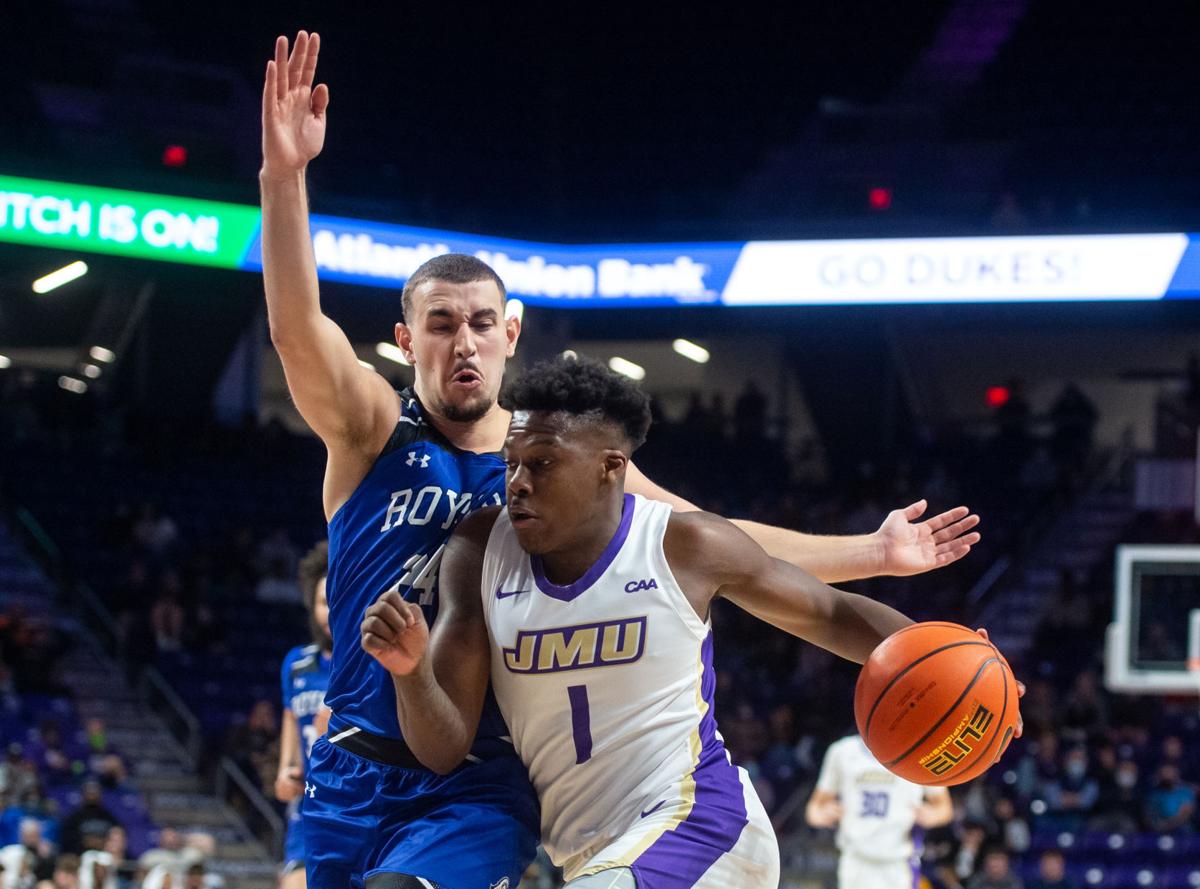 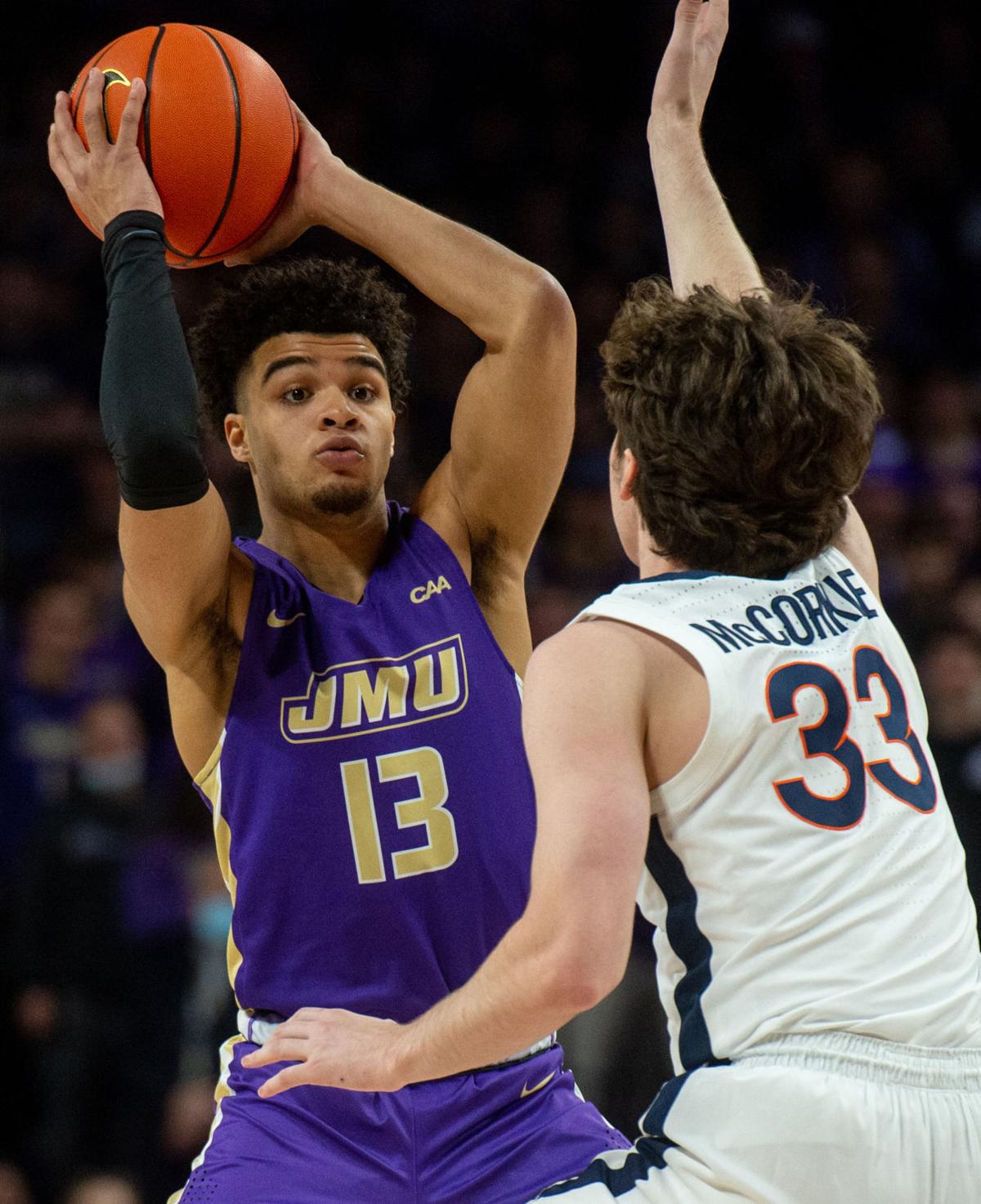 As James Madison continues to deal with the effects of positive COVID-19 cases within the program, anticipated NCAA rule changes have also complicated how the Dukes move forward.

JMU coach Mark Byington said during his weekly press conference on Tuesday that more than half of the Dukes' players, coaches and close support staff had tested positive for COVID-19 since the team returned to Harrisonburg on Christmas night. But JMU has not had a positive test in the past three days and Byington expects to have enough players to play Sunday at home against Hofstra.

“We had a little longer Christmas break than I was expecting,” Byington said. “We didn’t anticipate all this other stuff happening. We brought our guys back Christmas night and were anticipating playing Penn for our last non-conference game, then we had an outbreak of COVID cases. Since then, we’ve been planning and working and sometimes we don’t know what we are planning and working for.”

The Dukes (9-2) haven’t played a game since beating Radford in Harrisonburg on Dec. 11. The Colonial Athletic Association recently changed its policy on contests affected by COVID-19. Teams with at least seven available scholarship players are required to play on the originally scheduled date, but conference and school officials will make an effort to reschedule events in the case games can’t be played.

JMU has the NCAA maximum 13 scholarship players on the roster, but an anticipated NCAA rule change might mean three freshmen aren’t actually available.

Reports began coming out in the summer that the NCAA would change rules to allow players to compete in six to eight games in a season and still retain the option to redshirt. The change would be similar to a rule already in place in football, where players can participate in four games or less and still redshirt.

Basketball redshirt rules weren’t changed before the start of the season, but both Byington and JMU women’s coach Sean O’Regan indicated on Tuesday that it is expected and could apply to players this season.

“There is supposed to be a vote coming up to make redshirting similar to what it is in college football,” Byington said. “With our freshmen, we want to keep that avenue there. So really, they are not available players right now unless we are sitting here saying they are not going to redshirt. Last year, no matter how many games somebody played it did not count toward eligibility. This year, it does. It’s another thing we don’t know a definite answer to, but I’ve got to do what’s best for our team and what’s best for these players. So we are even more limited sometimes than it looks.”

The JMU men have established a solid 10-man rotation featuring seasoned veteran players through the first 11 games. The Dukes’ three freshmen — Andrew McConnell, Jaylen Stinson and Devon Savage — have each played in two games this season and would be eligible to redshirt with the rule change.

But until the NCAA makes an announcement, it is also unclear if there is a cutoff date. Byington said he isn’t sure if a redshirting player can compete in a game after Jan. 1. As of now, McConnell, Stinson and Savage are being treated as redshirts by the JMU staff and don’t count among JMU’s available players.

Confusion about the redshirt rule has left coaches, players and their families in a tough spot. True freshman, unlike other current NCAA athletes, have not been granted an extra year of eligibility dubbed the “COVID year,” but are now experiencing similar disruptions to their seasons as upperclassmen players did during 2020 and 2021.

“We did ask for clarification on the rule,” Andrew McConnell’s mother, Donna McConnell, said. “I could not find a rule online to reference. I was wondering if it would only apply to true freshmen or everyone, since all others already have a COVID year. We will talk to Andrew about a new rule if and when it comes out.”

Uncertainty about redshirting is just one reason the number of players the Dukes could have available for Sunday’s game against Hofstra is in question. As of early Tuesday afternoon, the CAA had not yet announced changes to health and safety protocols despite the fact the CDC had cut its recommended isolation period for many positive cases in half.

JMU is still operating under the CAA’s original 10-day quarantine guidance, but Byington said a vote to change that between now and Sunday was a possibility.

“We’ll have a limited roster, I don’t know exactly how many,” Byington said. “The CAA is supposed to vote on what they are going to do with quarantine for players coming back. If they stick with what it is we’ll have an even more limited roster. If they change it to what a lot of other leagues have, we’ll have one or two more guys back.”

The Dukes and Hoftra are scheduled to tip off at 4 p.m. on Sunday as part of a doubleheader at the Atlantic Union Bank Center. JMU’s women are slated to play the day’s opener at 1 p.m. against Elon.