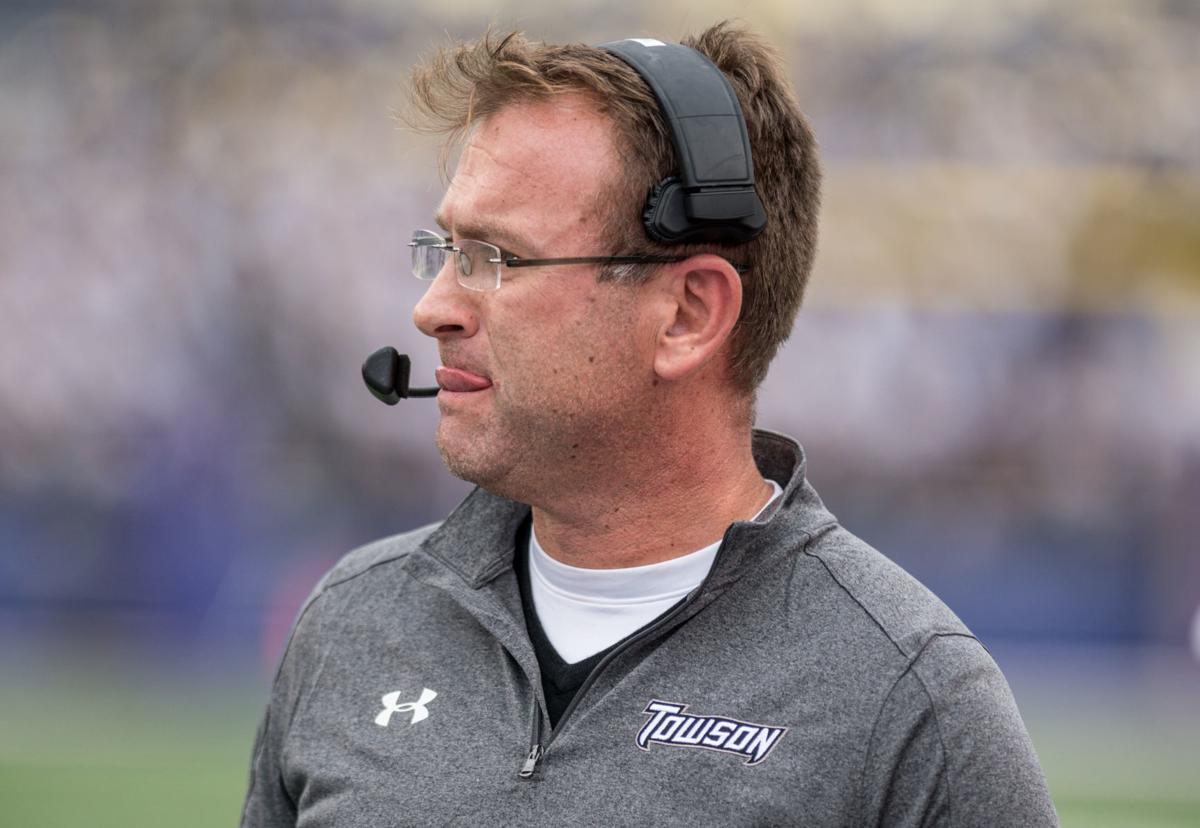 Towson coach Rob Ambrose looks out onto the field from his sideline during the Tigers’ loss to James Madison at Bridgeforth Stadium in October. He said the support of JMU administration, along with facilities and coaching, has aided the Dukes’ CAA run. 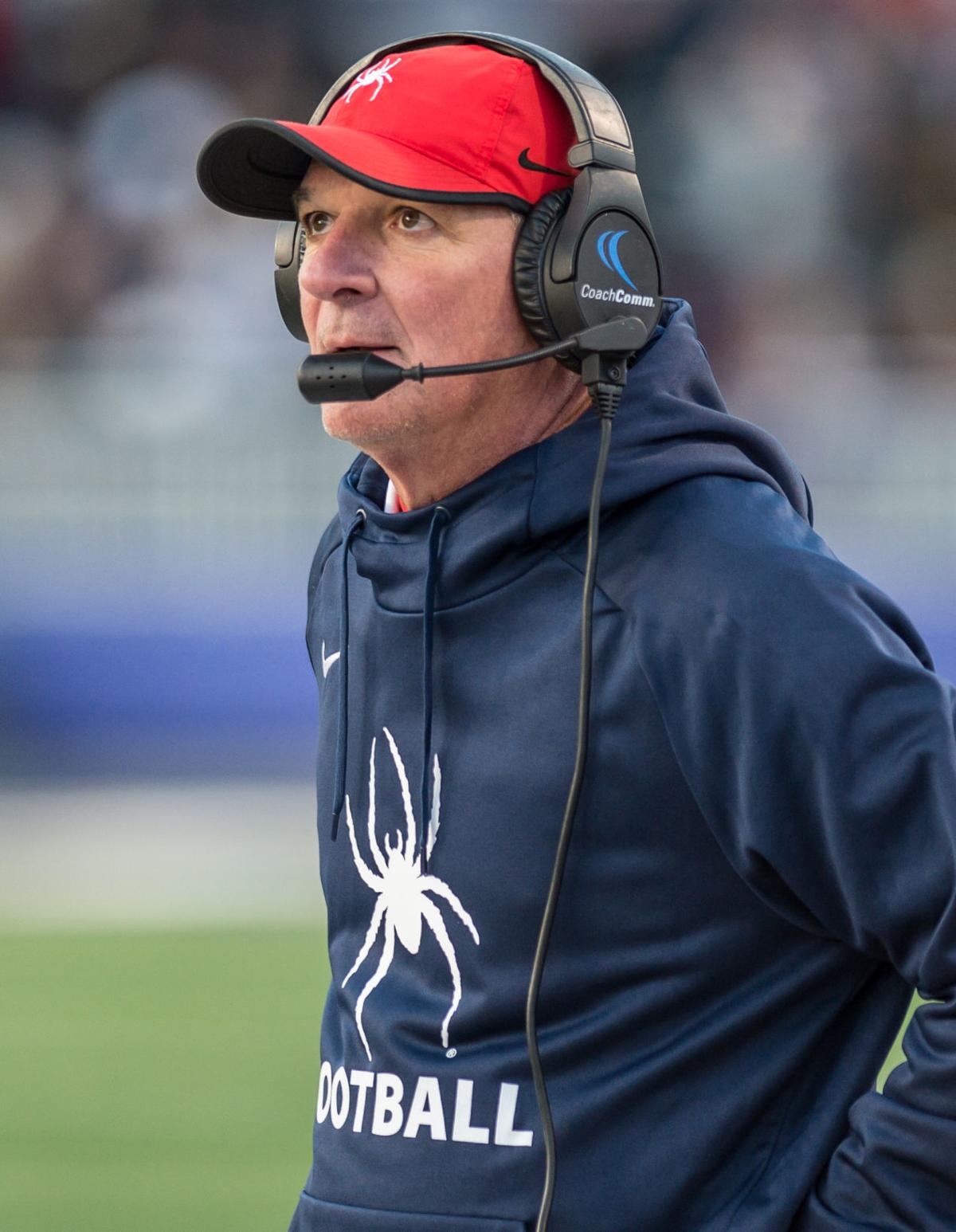 Richmond coach Russ Huesman looks up at the scoreboard during the Spiders’ loss to James Madison at Bridgeforth Stadium in November. He said after that game JMU was the best team in the country and he said this week he still feels the same way.

Towson coach Rob Ambrose looks out onto the field from his sideline during the Tigers’ loss to James Madison at Bridgeforth Stadium in October. He said the support of JMU administration, along with facilities and coaching, has aided the Dukes’ CAA run.

Richmond coach Russ Huesman looks up at the scoreboard during the Spiders’ loss to James Madison at Bridgeforth Stadium in November. He said after that game JMU was the best team in the country and he said this week he still feels the same way.

James Madison University has the largest football stadium in the Colonial Athletic Association, a locker room larger than some pro sports team and an athletic director who has been on the job for 20 years.

But several of those CAA coaches will be pulling for the Dukes when they face North Dakota State for the FCS title in Texas at noon Saturday – realizing when the game ends, the hard task of competing against JMU begins anew.

“I am always going to support a CAA team,” Mike London, the coach at William & Mary, said Tuesday.

“I will watch the game and pull for JMU,” said Tony Trisciani, who just finished his first season as the Elon coach.

Trisciani knows several of the JMU assistants who made the move from Elon to Harrisonburg, when head coach Curt Cignetti got the job after last season. Cignetti, who was at Elon for two seasons, will try to join Mike Houston as a first-year JMU coach who won a national title.

There is a sense of pride around the CAA as JMU plays for the title.

“I would say everyone in the league is pulling for them. I think they are the best team in the country. I said that after we played them” in November, Richmond coach Russ Huesman notes.

But Huesman knows what will happen after the title game is over.

Rob Ambrose, the coach at Towson since 2009, also has high praise for the JMU program.

“There is one premier (FCS) conference on the East Coast and that is us,” he said of the CAA. “Right now, JMU is driving that ship.”

“They are making (other CAA) teams better. They have continued to do it over and over again the right way. You can’t pat Jeff Bourne on the back enough,” Ambrose said of the JMU athletic director.

So how do CAA coaches compete against JMU, with its resources and recruiting base?

“It is difficult,” says Ambrose, after a long pause. “They are the ones with the monster stadium” that seats 24,877.

“They made a statement in terms of their facilities,” London said of Bridgeforth Stadium.

The other 11 schools in the CAA have an average seating capacity of around 11,000.

Ambrose notes his program was one of the few in recent years to knock off the Dukes, as Towson won the CAA regular-season title outright in 2011 and shared the crown with three other schools the following year.

Towson, under Ambrose, lost to North Dakota State in the FCS title game in 2013. And he can identify with Cignetti, as both have fathers who were successful football coaches.

Ambrose has heard the rumbling of some JMU fans and alums who want to move up a level, but he wonders if the Harrisonburg media market, for one, is big enough to make such a leap feasible. He admitted part of him wouldn’t miss trying to beat the Dukes if they moved up to the FBS.

London, who had stints at Virginia and Howard, also has a connection to Cignetti: both advanced to the national title game in their first year with a CAA school.

London, who just ended his initial season in Williamsburg, was the first-year coach at Richmond when the Spiders won the FCS national title in 2008. That team lost to JMU 38-31 at home in October before winning nine in a row en route to the crown over Montana.

He said the memories of that championship run remain to this day and he keeps in touch with players and coaches from that Richmond team.

Now once again a CAA team is playing for a FCS crown — the seventh time since 2008.

“The success of the JMU program helps the overall brand of the CAA,” said Trisciani, from Elon.

But come Monday, Trisciani and his fellow CAA coaches will once again try to figure out a way to compete with JMU — on and off the field.