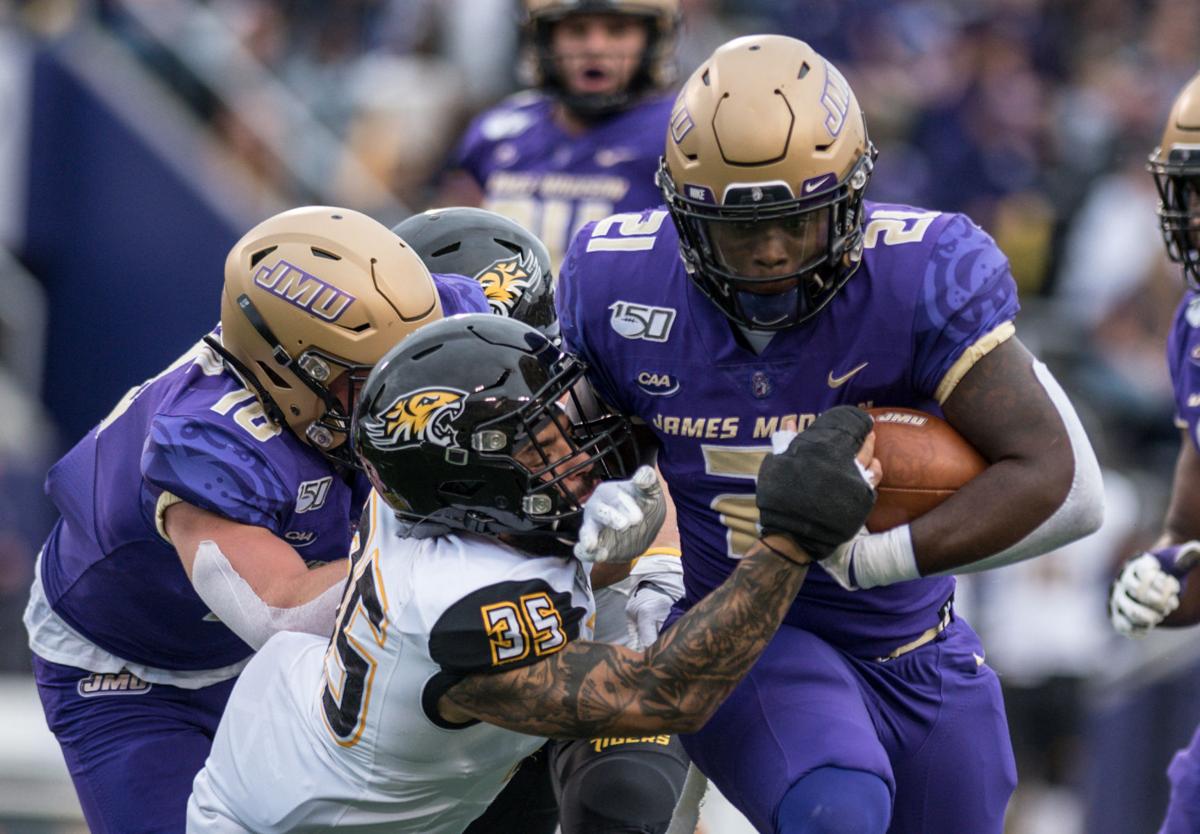 James Madison running back Latrele Palmer (21) carries the ball and breaks a tackle during the Dukes’ win over Towson last year at Bridgeforth Stadium. 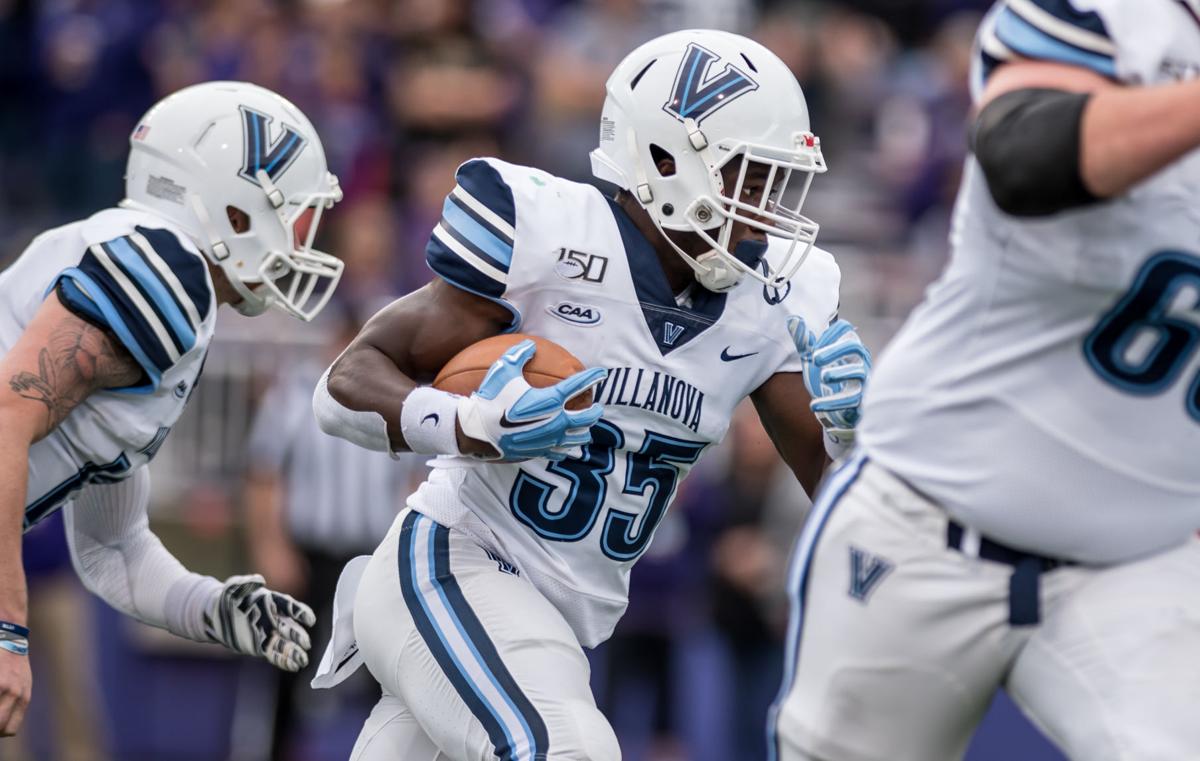 Villanova running back T.D. Ayo-Durojaiye (35) carries the ball during the Wildcats’ loss to James Madison last year in Harrisonburg. 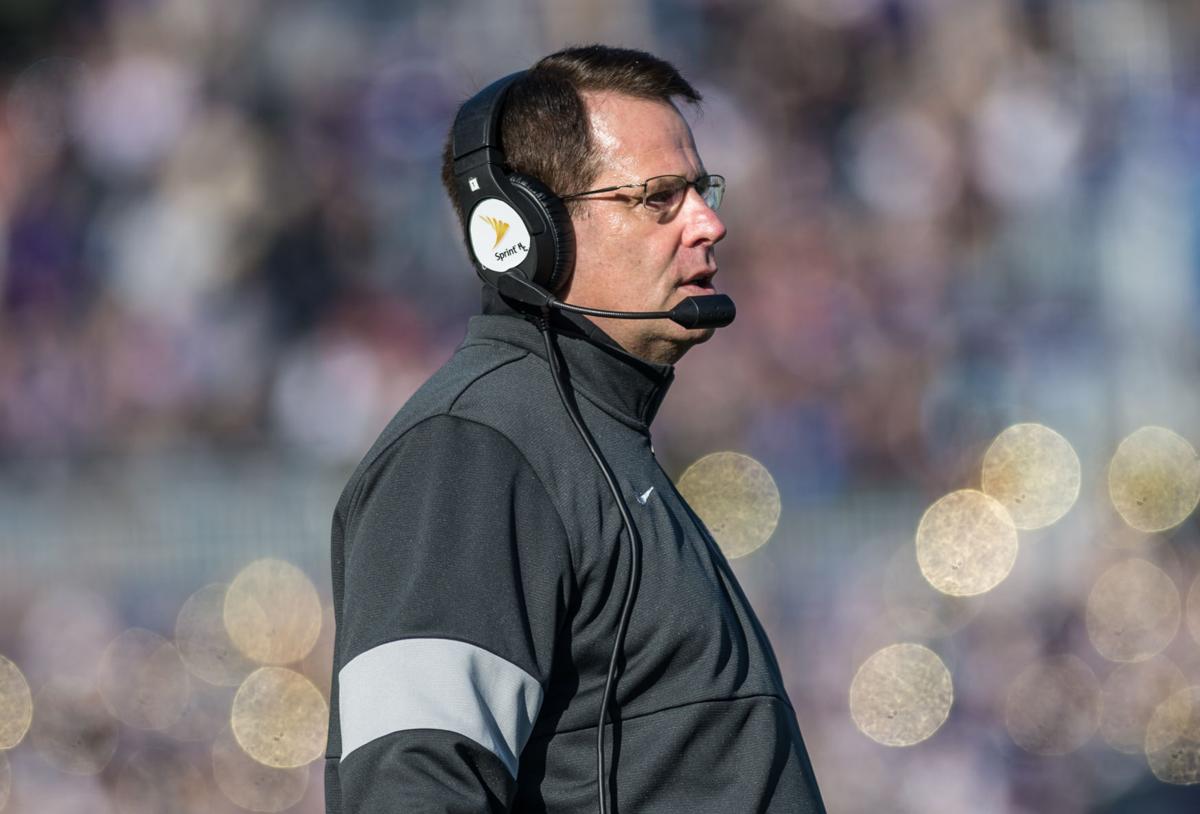 James Madison running back Latrele Palmer (21) carries the ball and breaks a tackle during the Dukes’ win over Towson last year at Bridgeforth Stadium.

Villanova running back T.D. Ayo-Durojaiye (35) carries the ball during the Wildcats’ loss to James Madison last year in Harrisonburg.

To cap its spring football season, the Colonial Athletic Association is considering holding a conference championship game, the Daily News-Record has learned.

Under one scenario being considered, the CAA — a 12-team conference — would split into two divisions and the division winners would meet in the title bout. The winner of the championship game would earn the league’s automatic qualifying berth into the FCS postseason.

“In a league like ours you’re not going to play a full complement of conference games [in the spring],” James Madison athletic director Jeff Bourne said. “So in order to make it feasible with regard to playing close or fairly close regionally to where you are, it’s probably going to divide the north and the south. It’s something that’s been talked about.”

Bourne said no decisions have been made yet, but that the CAA has multiple scheduling models it could implement once the NCAA’s Division I Council approves the postseason format proposed by the FCS Championship Committee and backed by the Division I Football Oversight Committee.

The FCS Championship Committee recommended the FCS playoffs — using a field of 10 automatic-qualifying teams and six at-large choices — be conducted from April 18 through May 15.

The Division I Council is expected to review the proposal on Wednesday.

“Once we have that [postseason] schedule in place that will allow conferences to determine and make some final decisions as to what their ultimate schedule is going to look like,” CAA commissioner Joe D’Antonio told the Daily News-Record. “How many regular-season games are you going to play? Are you going to have an alternative scheduling model? Are you going to look to potentially play a championship game? All of those things I think are on the table for discussion.”

A league championship game would eliminate any awkwardness or need for tiebreakers in regard to crowning an automatic qualifier in an abbreviated spring season when fewer at-large berths will be awarded and the possibility of two league members finishing with the same record atop the standings could be greater since it’s likely fewer conference games would be played.

Assuming the Division I Council approves the spring playoff the FCS Championship Committee proposed, there will be eight less at-large berths available than in a normal year.

Dividing the league in two and holding a CAA championship game ensures at least whatever programs meet in that title bout would’ve played against every other program in their own division.

“When you’re not playing that many of your peer institutions how do you truly determine an [automatic qualifier] without playing a [championship] game?” Bourne said. “That’s where we are currently.”

In three of the last four years, JMU won the league and earned the CAA’s automatic bid into the postseason. In those three years, the Dukes won the league outright and advanced through the playoffs to the FCS championship game.

JMU coach Curt Cignetti said he’d be in favor of the CAA holding a championship game this spring.

Other coaches around the conference, like Elon’s Tony Trisciani and Villanova’s Mark Ferrante, see both positives and negatives for similar reasons in regard to determining a champion via a title game.

The CAA used divisions as recently as 2010, but has never held a championship game.

But Ferrante said he only could see a championship game being beneficial to the CAA and its teams if the game is an additional contest and not attached to the regular season.

“Why would we want to give an in-league member an additional loss the weekend before playoff selections?” Ferrante said. “If you’re 7-0 or 6-1, [and then lose in the championship] you probably still get in at 7-1 or 6-2. I’d just hope the north and south winner of our divisional split would both get in, and I don’t think that’s a guarantee if one of them starts out at 5-2 and then gets a third loss.”

“The downside of it is a good team in our league will end up with a loss from the [championship] game,” Trisciani said, “and with the limited number of at-large bids, will it hurt the team and the league?”

Bourne said it's also possible the CAA includes enough flexibility in its spring scheduling model to allow its members to play a non-conference contest. Like JMU and the CAA, most FCS programs and conference have postponed seasons until the spring.

Cignetti said he is waiting on the Division I Council to approve fall practice for those schools which had to moved its season to the spring. Cignetti said he has tentative plans for the Dukes to begin in mid-October.

“Once we’re cleared to start training we’d like to get four or five weeks of training in,” Cignetti said, “to get the guys in shape and get on the field with the players for some skill instruction. Monday, Wednesday, Friday train and Tuesday and Thursday start out with some skill instruction. Four weeks will take you to October 12 and five weeks will take you to October 19, and then you’d work in 15 practices over 34 days per NCAA rule, which is the same as the spring practice rule.”

The second-year coach of the Dukes said him, his staff and his players are eager to get back on the field.