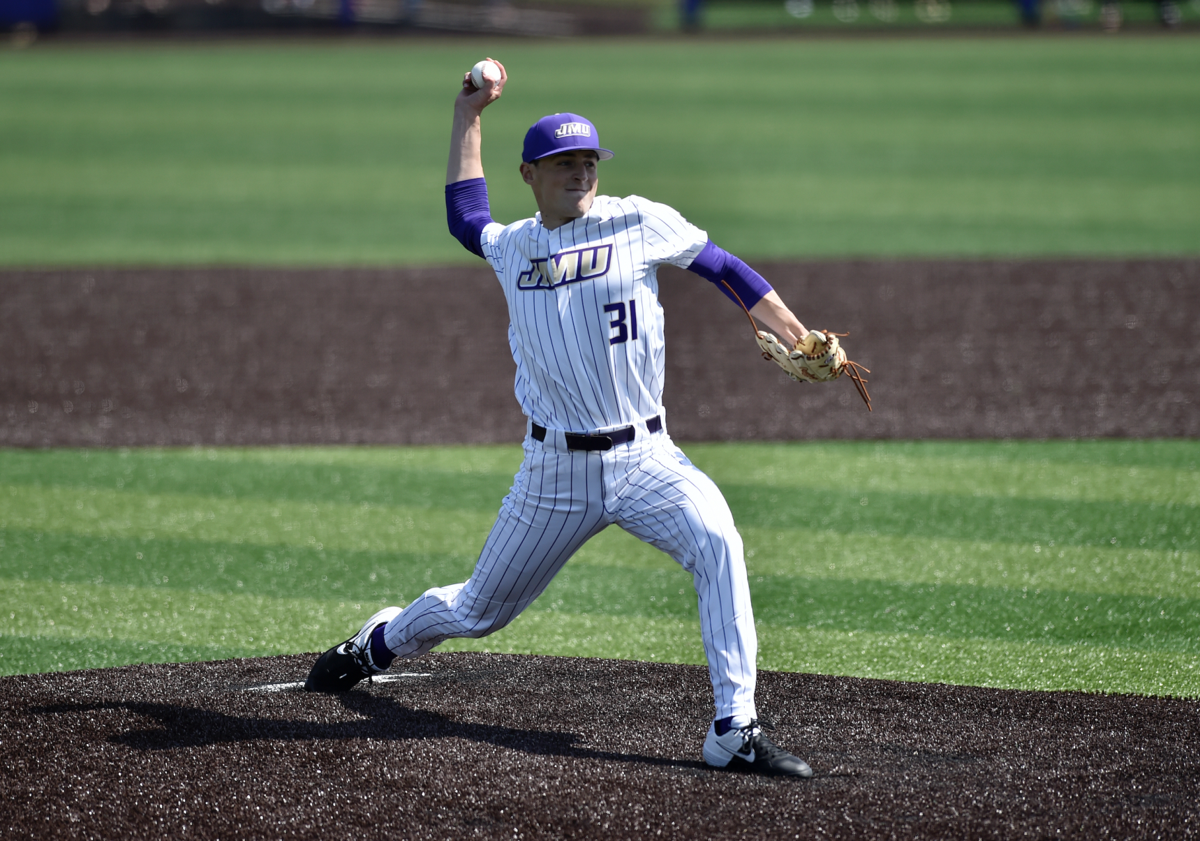 James Madison pitcher Justin Showalter throws during a game against College of Charleston earlier this month at Veterans Memorial Park in Harrisonburg. James Madison pitcher Justin Showalter looks in for a sign during a game against College of Charleston earlier this month in Harrisonburg. 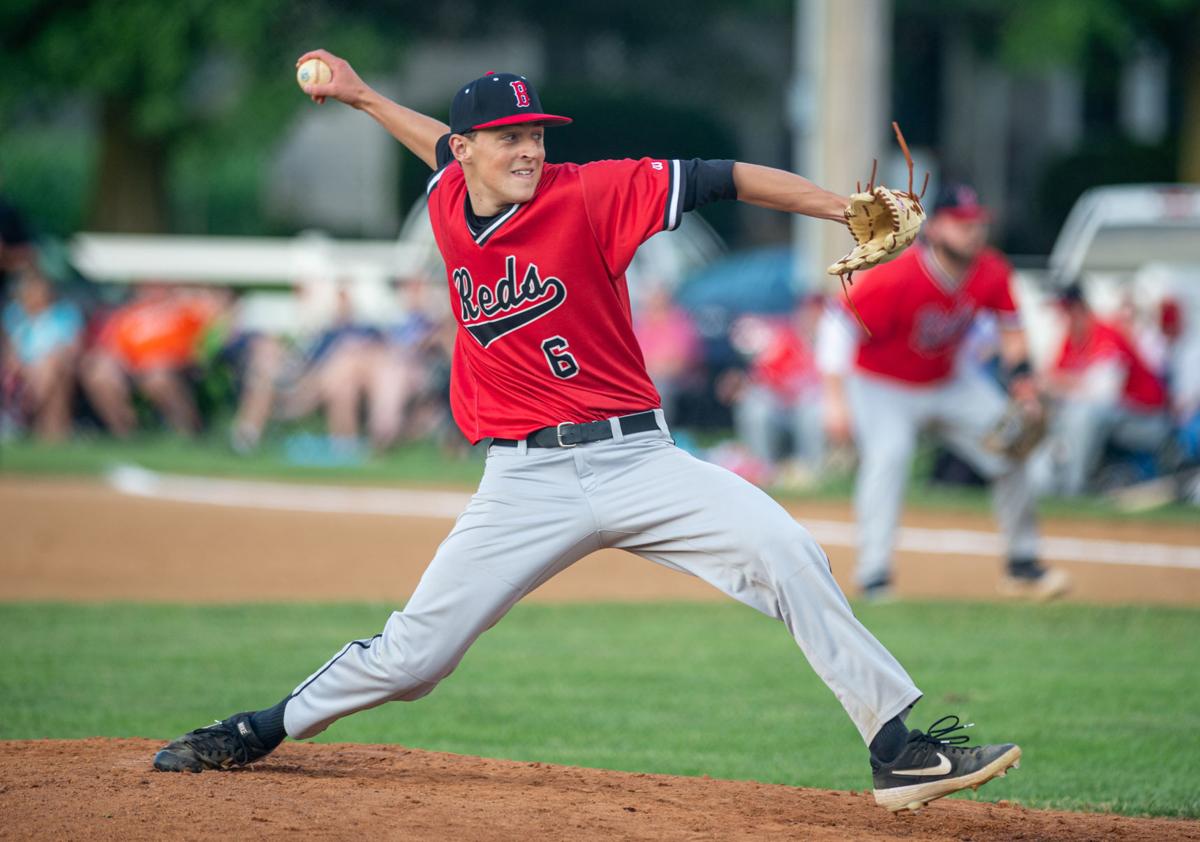 James Madison pitcher Justin Showalter throws during a game against College of Charleston earlier this month at Veterans Memorial Park in Harrisonburg.

James Madison pitcher Justin Showalter looks in for a sign during a game against College of Charleston earlier this month in Harrisonburg.

His numbers reveal he’s picked up where he left off last season.

“I guess I’ve just tried to stick with the same stuff that worked for me last year,” Showalter said, “but these past couple of games my cutter has been on and it’s been working really well for me, so I’ve relied on that and built everything else around that pitch.”

Showalter, a fourth-year junior for the Dukes and a graduate of Turner Ashby High School, has yielded only five hits. JMU associate head coach and pitching coach Jimmy Jackson said of the five hits allowed, only two or three were actually hard hit.

The right-hander has struck out nine and only walked three, and while picking up a victory against College of Charleston this past Sunday, Showalter took a no-hitter into the seventh inning.

That’s quite the accomplishment for a pitcher, who during the long offseason didn’t know if he’d be able to throw at all this spring.

“It feels really good,” Showalter, who is slated to pitch again this Sunday at William & Mary, said. “But it was a long road with a lot of obstacles and hurdles to overcome the past year, so it feels really good to get back out on the mound and see that I’m able to get out there and keep doing my thing.”

The last seven months have involved plenty of rehab for Showalter after an elbow injury suffered during the summer – while pitching for the Rockingham County Baseball League’s Bridgewater Reds – sidelined him.

“We thought he would need Tommy John, but it wasn’t the full Tommy John,” Jackson said.

Still, Showalter had surgery, but instead of a 12-to-18-month recovery period, he needed six or seventh months to heal and build his arm back up.

And Showalter said toeing the line between ramping up to be ready to pitch for the Dukes without jeopardizing a potential professional future in the sport was most challenging. He said Jackson, doctors, trainers and physical therapists all did a great job in helping navigate the task.

“We actually had to tweak his plan with about a month and a half to go,” Jackson said. “In my opinion, he was doing too much based on what the plan written out for him was from the doctor. There wasn’t as much rest in between for heavy throwing days and so we sat down, tweaked it and I checked with our trainer and he checked with the doctor and PT guys.

“We weren’t doing more. Just the same amount over more days, so we were stretching it out. It seemed to help him.”

Showalter said: “It was a lot of unknowns and a lot of adversity to face, but I think in the end it made me tougher mentally and allowed me to build myself up to be physically a better athlete because I had to go through all this rehab and intensive training, which has refined me as a pitcher. And I think I owe a lot of my success so far this year to that process.”

Jackson said they’re still monitoring Showalter closely. In his first outing of the year, he could’ve thrown deeper into the game than five innings, Jackson noted, but he and Dukes coach Marlin Ikenberry didn’t want to push their standout pitcher too soon.

“For us, the player’s future is always going to come first,” Jackson said. “… Look at the first start he had. We maybe would’ve won that game if we just kept running him out there. His pitch count was low, but I think people put too much stock into pitch count.

“I think it’s more up and down [between innings], and how many pitches on top of that, so when you look at a pitch count and see he was only at 50-something and we had built him up to throw over 60 already, well the problem was he got up and down five times and the most he had done before that was four. We did three and four and so we were not going to push to six or seven.”

What helps Showalter keep his pitch count down is his ability to pitch to weak contact.

He said his approach is to let his infield and outfield behind him make plays in lieu of trying to strike out opposing hitters.

In his last three starts of last season for JMU, Showalter threw a complete game, lasted seven innings and 6 2/3 frames, and those triumphs, which were all wins, came while throwing his full arsenal of pitches.

Jackson said Showalter has only thrown his two-seam fastball and his cutter in games so far this spring. Showalter said he hasn’t needed to throw his curveball or change up yet.

“I wouldn’t say I was surprised [with how well Showalter has pitched],” Jackson said, “because he’s worked so damn hard and he’s such a good pitcher. You can probably count on one hand where I’ve seen him try to throw too hard. Like, the ball comes out the way it comes out and he tries to put the ball the way it’s supposed to go every time. It doesn’t always go there, but he’s trying to do that every time he throws the ball.

“He’s not an overthrower or max-effort guy, so the only thing I was surprised about was the command of his cutter. It’s a slider, but he calls it a cutter. The command of his cutter is way better than I thought it would be this quick. Sometimes it gets a little sideways and not as much vertical, but every eight of 10 that he throws are like the day he left last year. That’s been the amazing part to me because any doctor doesn’t want you to throw your breaking stuff until like a month to go in the rehab process.”

Showalter is hoping a strong finish to this spring propels an opportunity in the Major League Baseball Draft.

On the heels of last year’s shortened college campaign in which Showalter dazzled with a 4-0 mark, a 0.68 ERA and a 21-to-four strikeout-to-walk ratio, there was uncertainty about his next move because at the time no one knew what the MLB Draft would look like. Showalter kept pitching and throwing bullpen sessions on his own, according to Jackson, to stay ready when most still believed prospects would have the opportunity to work out for scouts.

That never happened, though, due to the pandemic, and eventually MLB decided on a truncated five-round amateur draft. Showalter said scouts inquired about him possibly signing after the draft for $20,000 but he decided against it with the desire of being selected this year. This summer’s draft will last 20 rounds.

“This year is just still so different than years past,” Showalter said. “So, it’s still so hard to say, but I’m hoping that if I keep doing my thing that I’ll get a chance somewhere.”

NOTE: JMU added a non-conference home doubleheader with St. Joseph’s to its schedule for May 2, the program announced on Friday. The first game will start at noon and Game 2 will begin at 3 p.m.