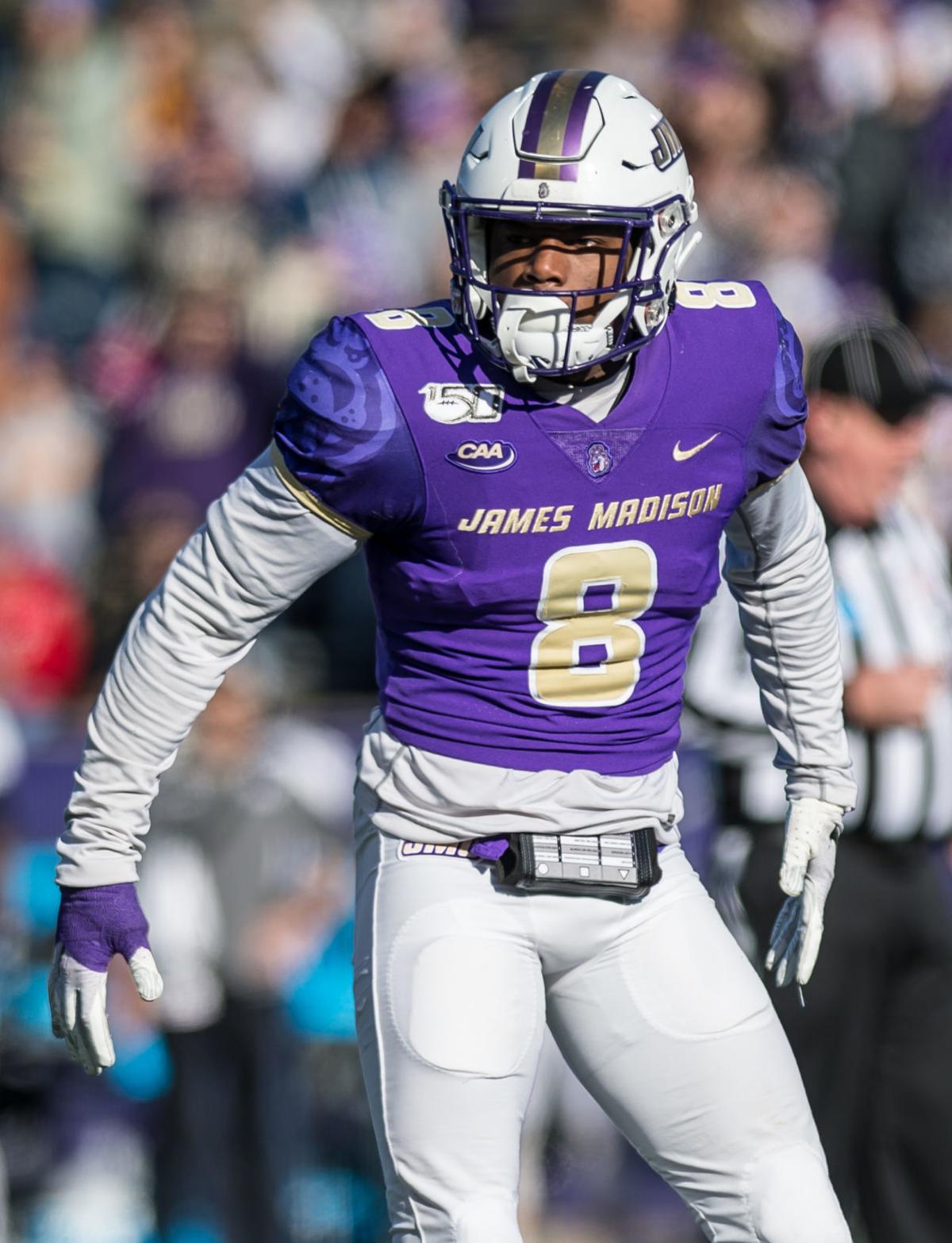 James Madison spur Wayne Davis looks to the sideline for a play call during the Dukes’ win over Monmouth in the second round of the FCS playoffs at Bridgeforth Stadium. 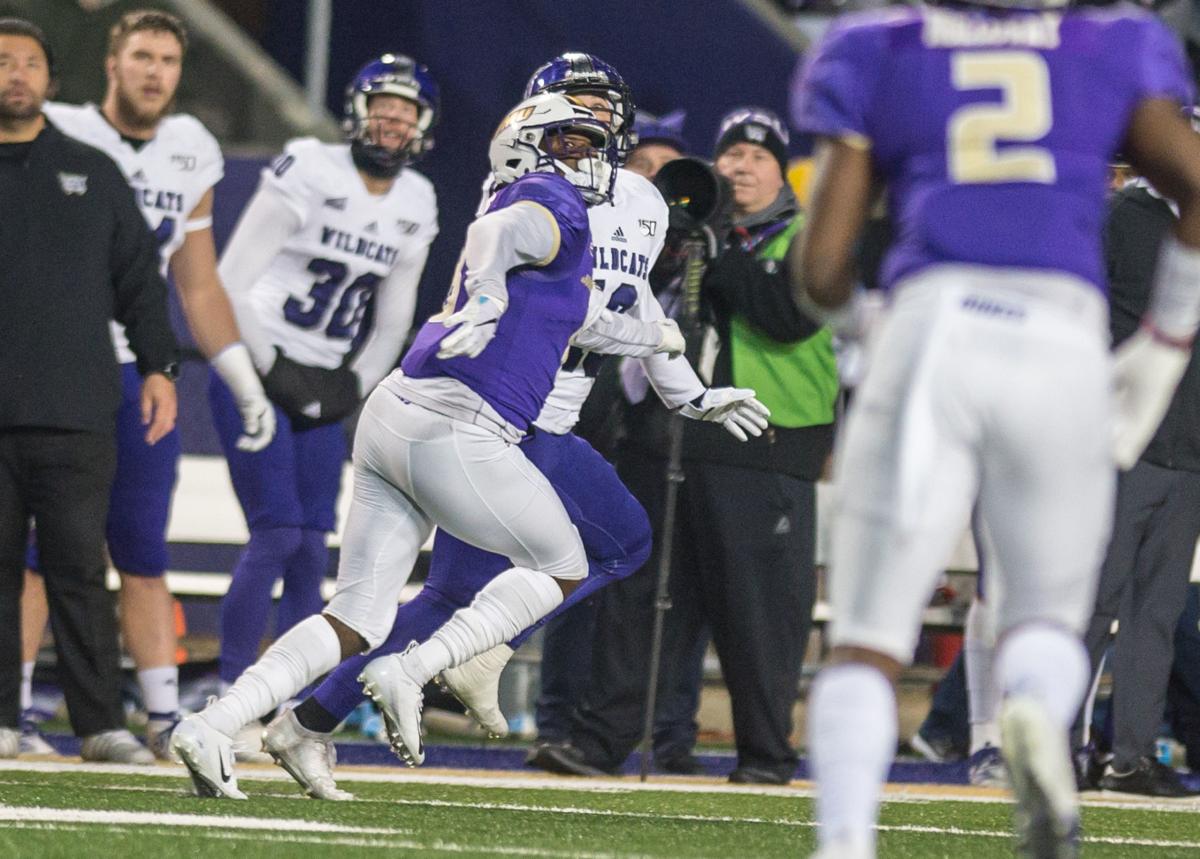 James Madison safety Wayne Davis (8) races Weber State wide receiver David Ames (19) for a pass during the Dukes’ win over the Wildcats in the semifinals of the FCS playoffs on Saturday at Bridgeforth Stadium.

James Madison spur Wayne Davis looks to the sideline for a play call during the Dukes’ win over Monmouth in the second round of the FCS playoffs at Bridgeforth Stadium.

James Madison safety Wayne Davis (8) races Weber State wide receiver David Ames (19) for a pass during the Dukes’ win over the Wildcats in the semifinals of the FCS playoffs on Saturday at Bridgeforth Stadium.

The junior spur – what the Dukes call their hybrid outside linebacker-safety spot – doesn’t appear on any All-American teams or any All-Colonial Athletic Association squads, but it’s probably because the position he plays isn’t typically one to accumulate the most of any specific statistic.

His job is to do everything well.

“It’s very different,” Davis said after second-seeded JMU topped No. 3-seed Weber State in the semifinals of the FCS playoffs on Saturday to advance to the Jan. 11 national championship game in Texas against top-seeded North Dakota State.

“My tendencies are different on every play,” he added.

On a second-and-10 from the Weber State 40-yard line, JMU defensive coordinator Corey Hetherman called for Davis to blitz.

The 5-foot-10, 190-pounder took off from where he was initially mirrored against an opposing slot receiver before the ball was snapped. Davis blew past a motioning H-back and corralled Weber State running back Kevin Smith in the backfield for a 2-yard loss.

“It’s funny, earlier in the year I don’t think he liked blitzing,” Hetherman said. “But he’s a really good blitzer.”

Davis said: “First when I was blitzing it was me against linemen, and I’m more of a safety, so it was kind of rough on me. So I kept going back to the drawing board and working on my blitz moves. And now I love it.”

His next assignment was unlike the last, tasked with playing in one-on-one coverage against Wildcats inside receiver David Ames on third down.

Instead of matching up with those bigger than him, Davis’ primary objective was to stick with the speedy Ames.

The Ohio State transfer ran evenly with the receiver, turned his head back toward the quarterback in time to notice the ball, and knocked it out of Ames’ reach to force a punt by Weber State.

“I just played my position, did my job and executed the play,” Davis said.

For the season Davis has 56 tackles, eight tackles for loss, 1.5 sacks, a forced fumble, two interceptions and a pass breakup – productive enough across all categories considering the Dukes use his wide-ranging ability to their advantage.

“His awareness and savvy for football,” Hetherman said, “with the understanding of where to be and how to be there, how we can show him and all those different things, I think are tremendous and just helps with all of our looks. It really brings a lot of our blitzes free whether it’s to him or away from him.”

Davis said he’s gained more comfort in Hetherman’s system as the season has gone on. Now, the Norfolk native just wants to be at his best when JMU meets the Bison for the national title next month in Frisco.

“From what I heard, I know they’re a great team and so we’ll definitely have to bring our ‘A’ game,” Davis said.

This is second time in Davis’ career he’ll have a shot at winning it all. When he was with the Buckeyes, they lost to eventual College Football Playoff champion Clemson 31-0 in the semifinals at the Fiesta Bowl on Dec. 31, 2016.

He said he’s happy the Dukes advanced past the final four and have the shot to hoist the trophy.

“This is why I chose JMU,” Davis said, “because they play for national championships, when I looked into transferring in. So the opportunity is here, we just got to go finish.”