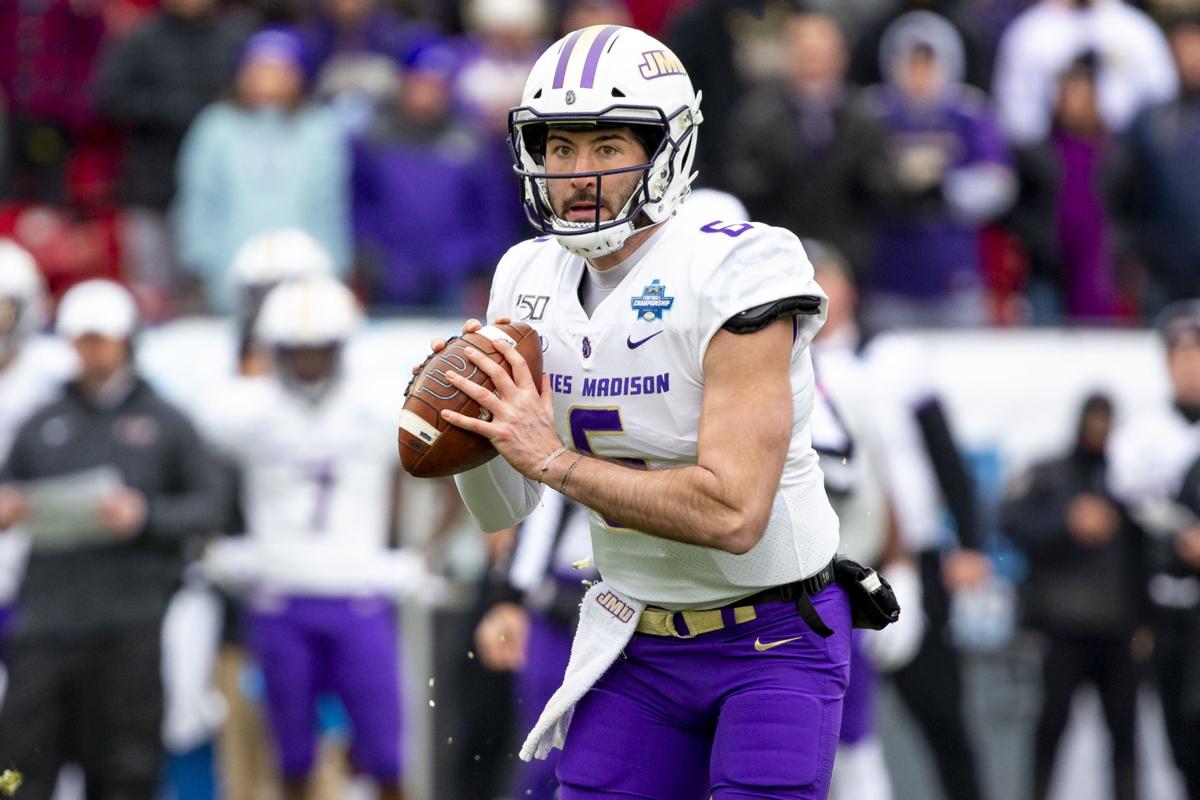 ABOVE: James Madison coach Curt Cignetti speaks with an official during the second half of the FCS championship game on Saturday in Texas. RIGHT: James Madison quarterback Ben DiNucci (6) looks to pass during the first half of the FCS championship NCAA college football game against North Dakota State in Frisco, Texas. His late interception ended the comeback attempt by Dukes. 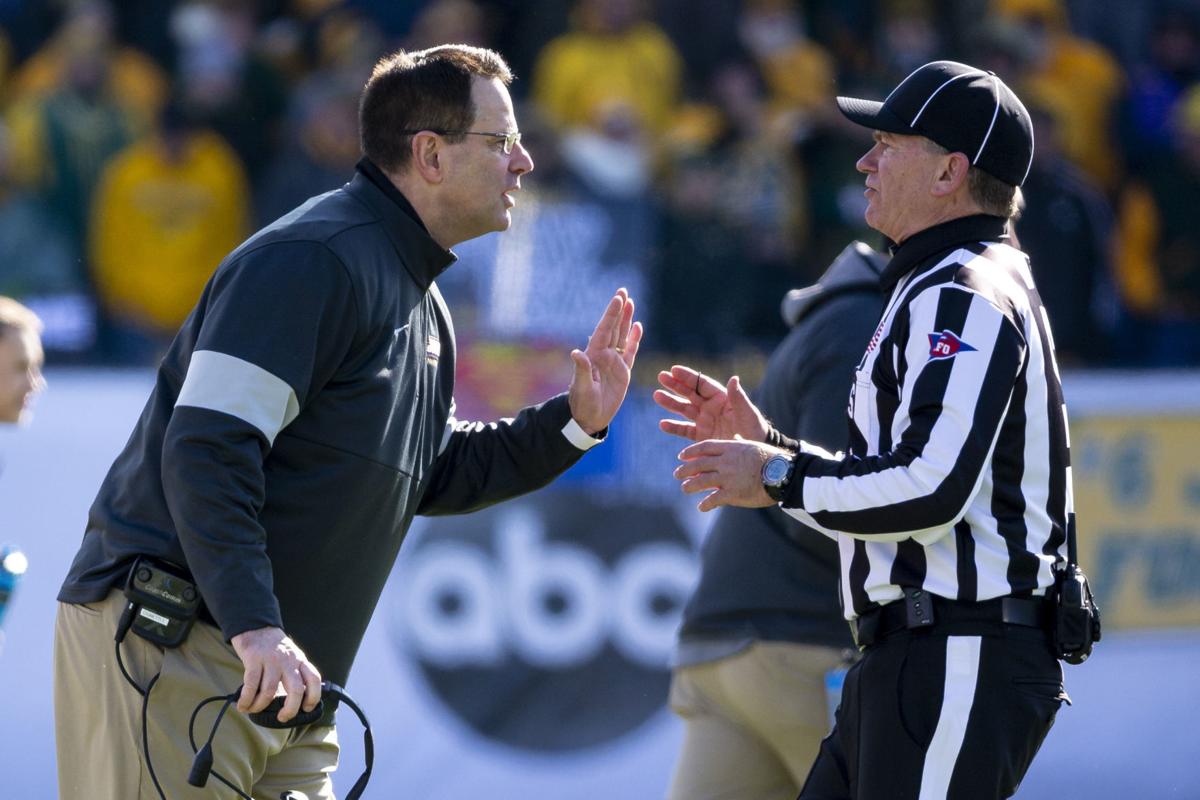 James Madison coach Curt Cignetti speaks with an official during the second half of the FCS championship game on Saturday in Texas.

North Dakota State safety James Hendricks smiles after scoring on a fake field goal attempt during the first half of the FCS championship game against James Madison on Saturday in Frisco, Texas.

ABOVE: James Madison coach Curt Cignetti speaks with an official during the second half of the FCS championship game on Saturday in Texas. RIGHT: James Madison quarterback Ben DiNucci (6) looks to pass during the first half of the FCS championship NCAA college football game against North Dakota State in Frisco, Texas. His late interception ended the comeback attempt by Dukes.

James Madison coach Curt Cignetti speaks with an official during the second half of the FCS championship game on Saturday in Texas.

FRISCO, Texas — Their resiliency propelled them before, and they didn’t let the grandest stage diminish one last try at a come-from-behind victory.

“Yeah, the pressure was on,” James Madison junior running back Percy Agyei-Obese said, “there was anxiety and there were a lot of outside factors, but we just stayed focus on trying to get the job done.”

Remember, these Dukes had survived overtime at Stony Brook and rallied to beat a ranked Villanova squad in the regular season.

So with 2:51 left and the FCS national championship trophy on the line, the task of driving 63 yards while needing a touchdown and a two-point conversion just to force overtime against perennial power North Dakota State wasn’t overwhelming.

“We just felt like if we did what we were capable of doing and not lose our cool,” JMU senior quarterback Ben DiNucci said, “we’d have a pretty good shot at that thing. And as you could see, it went down to the last play.”

With the clock melting as quickly as the Texas sun rid the Toyota Stadium surface of the snow that had moved through earlier Saturday, DiNucci rolled to his left from three yards out and fired in hopes of connecting with senior wide receiver Brandon Polk for six like the pair had done 11 times previously in 2019.

But NDSU senior safety James Hendricks leaped and snagged the ball out of the air to dash the Dukes’ dream and secure the Bison a 28-20 win along with their eighth national title in the last nine seasons.

“Knew that they were going to throw it,” Hendricks said. “And trusted that [DiNucci] was going to make that throw to the flat and not the guy that I’m supposed to cover. I made the play and the rest is history.”

The Dukes end their campaign with a 14-2 mark as NDSU finishes with an unblemished 16-0 record. But to even have the last-chance shot at knocking off the Bison, who extended their winning streak to 37 games, JMU had to bounce back from multiple setbacks throughout the afternoon.

But until that point, the Bison looked as if they’d cruise during the final stanza while waiting for the green-and-gold confetti shower. NDSU freshman quarterback Trey Lance, the game’s Most Outstanding Player, had a 44-yard touchdown run to open the fourth quarter and put his team ahead by 15 points.

The sprint into the purple-shaded end zone came on a third-and-23 as Lance navigated attempting tacklers. And that was the issue for the Dukes’ normally dominating run defense in the contest – they couldn’t corral Lance.

“He’s a baller,” JMU senior defensive end John Daka said. “I’m going to give it to him. He’s probably the best quarterback I’ve ever played against.”

Lance tallied 166 rushing yards and picked up eight first downs on 30 rushing attempts while barreling through or around defenders. Entering Saturday, JMU was giving up only 61.1 rushing yards per game.

“He’s just a cut above,” Cignetti said of Lance.

Daka said: “There were times I was literally right there for a sack, but I hit him too high or should’ve tackled his legs, but he’s big and athletic and he’s got good instincts to get away, too.”

The first double-digit lead the Bison grabbed occured late in the second quarter when Hendricks, who doubles as the holder, ran for a 20-yard touchdown on a perfectly executed fake field goal after the Dukes actually stopped Lance for only a 3-yard gain and forced him to throw an incomplete pass to stall the series.

“James Madison has not let very many people score touchdowns,” NDSU coach Matt Entz said. “But the one thing they had shown is they lined up the exact same way every time after a touchdown to block the extra point and, or field goal. So it was [the call].”

Hendricks’ touchdown capped a 21-3 run for NDSU to close first the half.

“So I think you saw flashes of JMU football,” Cignetti said. “But, unfortunately, there were too many big, negative plays that proved to be too much to overcome.”