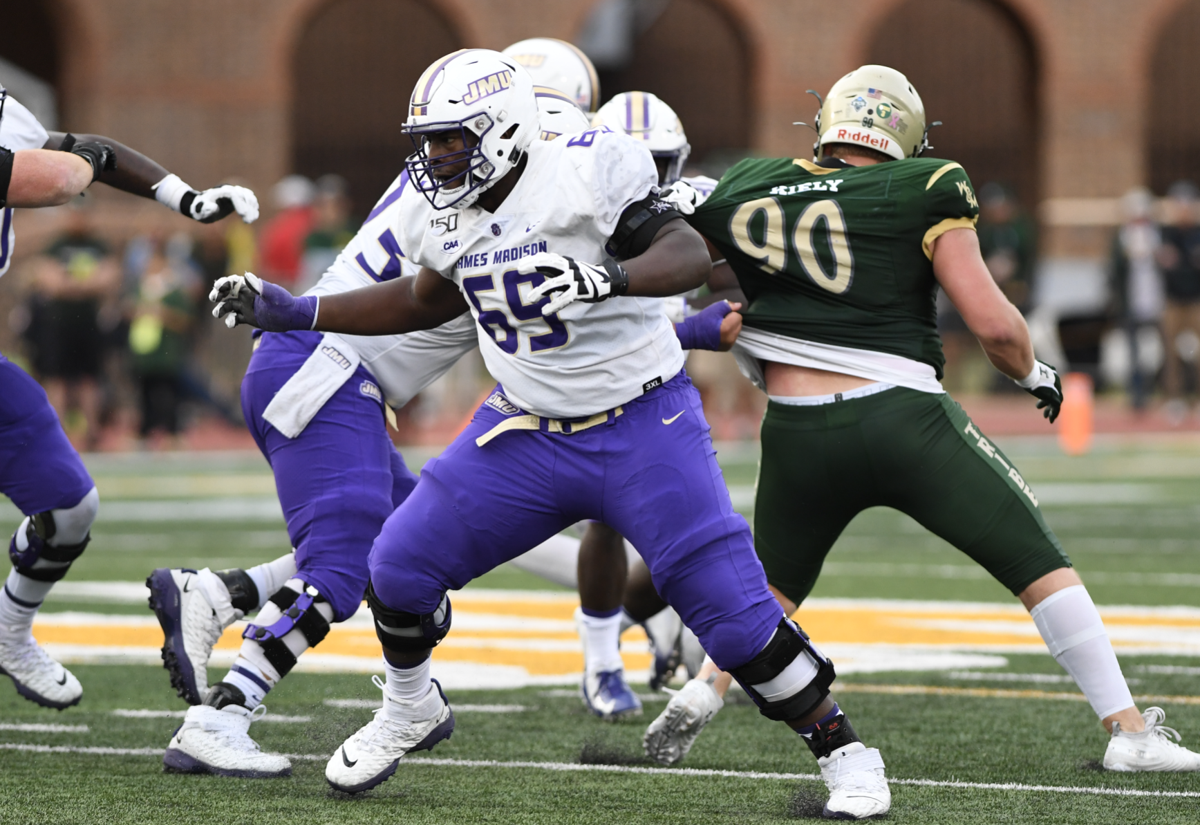 James Madison offensive lineman Truvell Wilson jogs off the field during the Dukes’ win over Richmond last season in Harrisonburg. 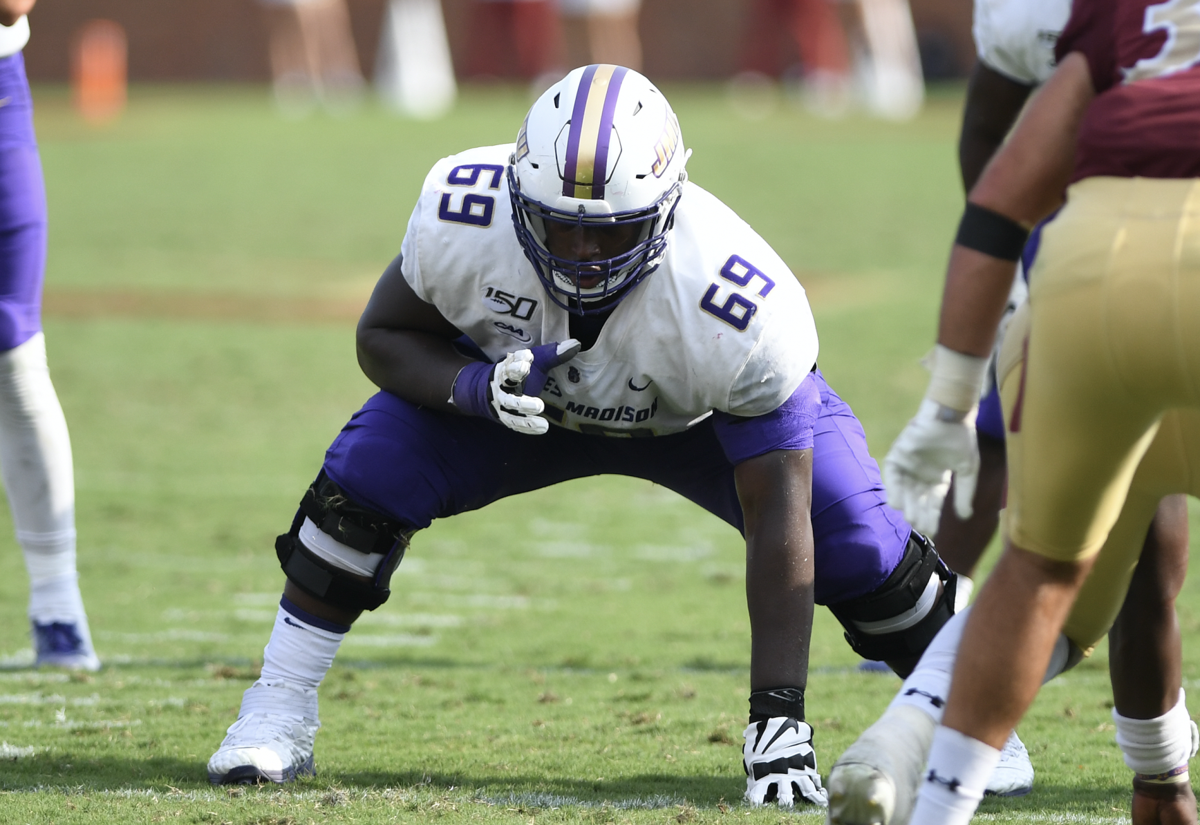 James Madison left guard Truvell Wilson lines up for a snap during a win over Elon last season in North Carolina.

James Madison offensive lineman Truvell Wilson jogs off the field during the Dukes’ win over Richmond last season in Harrisonburg.

James Madison left guard Truvell Wilson lines up for a snap during a win over Elon last season in North Carolina.

His perspective has changed in the last few months as he’s shouldered more responsibility than most college athletes have to do.

The senior left guard, who was named an All-Colonial Athletic Association first-team choice on Wednesday, would like to cap his career by hoisting the FCS national championship trophy and at the same time, like he has all season, also be a good dad to his four-month old daughter Aeverie.

“It really gives you the extra motivation,” Wilson said. “It’s no longer you looking out for yourself. Because, as a student-athlete in college, you look out for yourself. You eat when you want to. You do things on your own time.

He said he’s got outstanding support from his fiancé HaDiya Hairston. She’s with Aeverie mostly during the week, because during this busy spring football season he doesn’t get to spend as much as time as he’d like with them until the weekend when after the Dukes are done playing on a Saturday.

“So that’s given me the extra motivation to make sure that I go out and find a good job,” said Wilson, and he already has one lined up. He’s scheduled to start as a systems engineer for Verizon in Northern Virginia after graduation.

Wilson could’ve returned to JMU for the fall season, he said, but is ready to begin his job and be with his family instead.

“So, I want to make sure I finish school strong,” he said. “And it’s given me motivation on the field because I want it to be something she can be proud of and she can look back on one day and say my dad was a football player, did this, this and that. I want to leave a legacy.”

If the Dukes get to Frisco, Texas for fourth time in five seasons, they’ll have Wilson to thank as one of the key members of their offensive line this campaign. He’s started 21 games in his career and is one of only two multi-season starters for the unit along with left tackle Raymond Gillespie.

JMU lost its All-American right tackle and most veteran offensive lineman Liam Fornadel midway through the regular-season slate because of a shoulder injury, so younger players have looked Wilson’s way for mentorship, he said.

Against Elon, freshman tackle Tyler Stephens started next to Wilson. And in the Dukes’ last two wins over William & Mary and Richmond, they started freshman Cole Potts at right guard.

“He’s very dependable, reliable and level-headed,” second-year JMU coach Curt Cignetti said about Wilson. “He’s smart and he’s helped some of the younger guys at times when they’re in next to him with the calls and assignments, and when it’s all said and done at the end of spring, I’m really going to miss Truvell.”

Wilson said he likes to lead by example, primarily, but when Stephens, Potts or any other inexperienced offensive lineman asks for advice, he gives them one piece of guidance he feels has been key to his success.

And Wilson developed into the player he’s become. He had only two Division II offers when he was an All-State choice at Henrico High School, so his college career began at UVA-Wise. He transferred to JMU as a walk-on and ultimately earned a scholarship, a starting job and all-conference honors.

“So, it’s always important to be confident. You can’t come out and try to do too much. It’s all about focusing on your job, what you have to do within the scheme and staying confident in your ability. If you come out scared or nervous or anxious like if it’s your first time starting, it jumbles your mind and it impacts your performance. So, I tell them to clear their minds and to be confident in what you’re doing and your play.”

He said Dukes offensive line coach Damian Wroblewski deserves credit, too, for aiding the offensive line in maintaining its strong play during such a strange season. In addition to Potts and Stephens seeing game action, Nick Kidwell changed positions and slid from right guard to right tackle ahead of the William & Mary game.

JMU boasts the fifth-best rushing offense nationally (236 yards on the ground per game) while running behind its physical offensive line.

“And you know, you have to have faith in how you’re being coached,” Wilson said. “Because the [young players] are being coached the same way I’ve been coached. And so, as long as you buy into what’s going on and lean on the guys around you, you’ll be just fine.”

Cignetti called Wilson, “a real mature guy,” and the 6-foot-2, 313-pounder has been that for the Dukes in a season when they’ve needed one up front.

Wilson hopes his influence is enough to help the Dukes finish with a championship this spring after losing in last season’s title game to North Dakota State.

“It’d mean everything,” Wilson said. “I got here after [JMU] won it in 2016. We fell short in 2017 and fell short again last season and I was starting when we fell short last season, so it’d mean the world to me if I could get back to it and win the whole thing. It’d be the perfect ending to my football career, by ending it as a national champion. It’d put my name in the history books forever.”