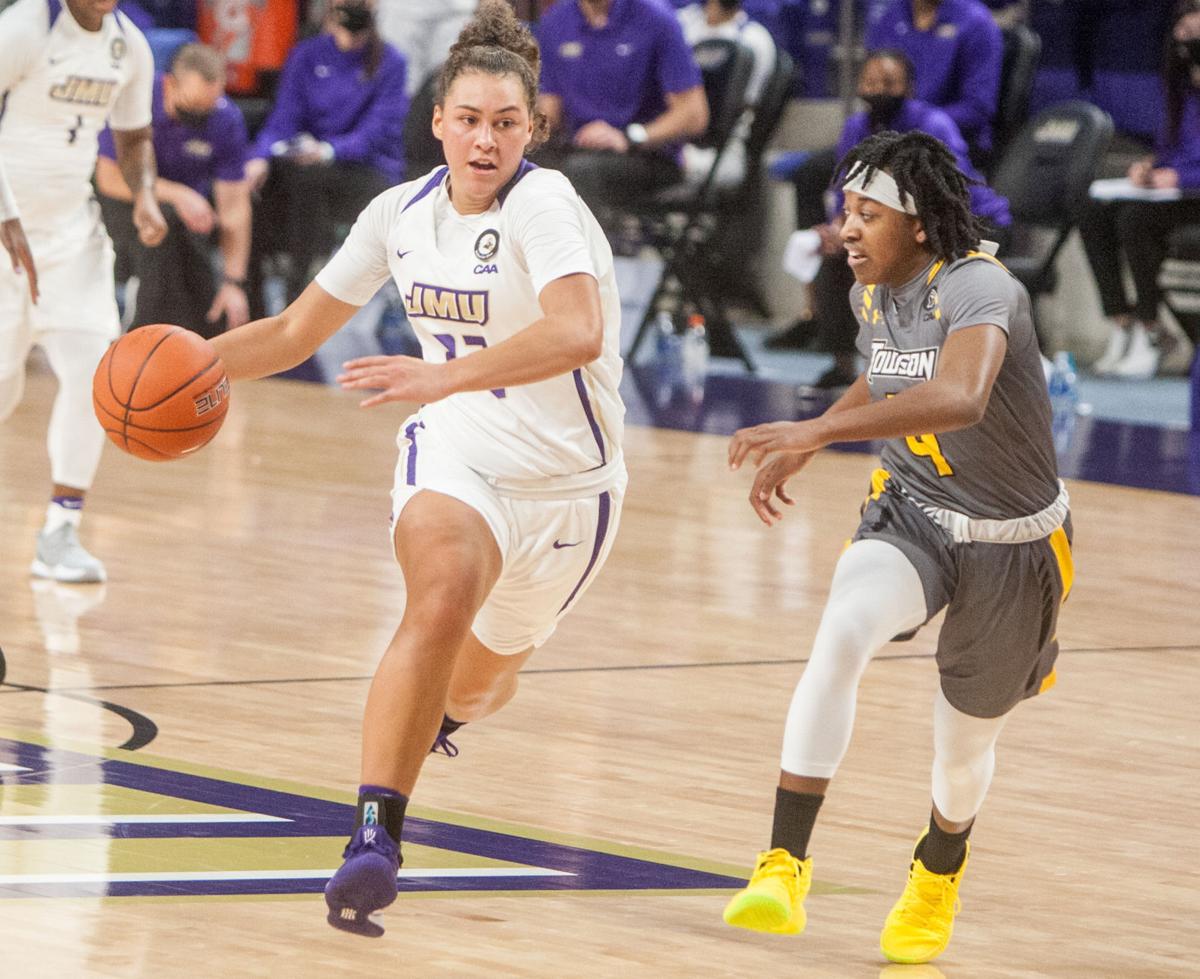 James Madison guard Peyton McDaniel (22), the 2020-21 CAA Rookie of the Year, drives up the court against Towson guard Aleah Nelson (4) during a game last season. McDaniel has been out with a knee injury all of 2021-22. 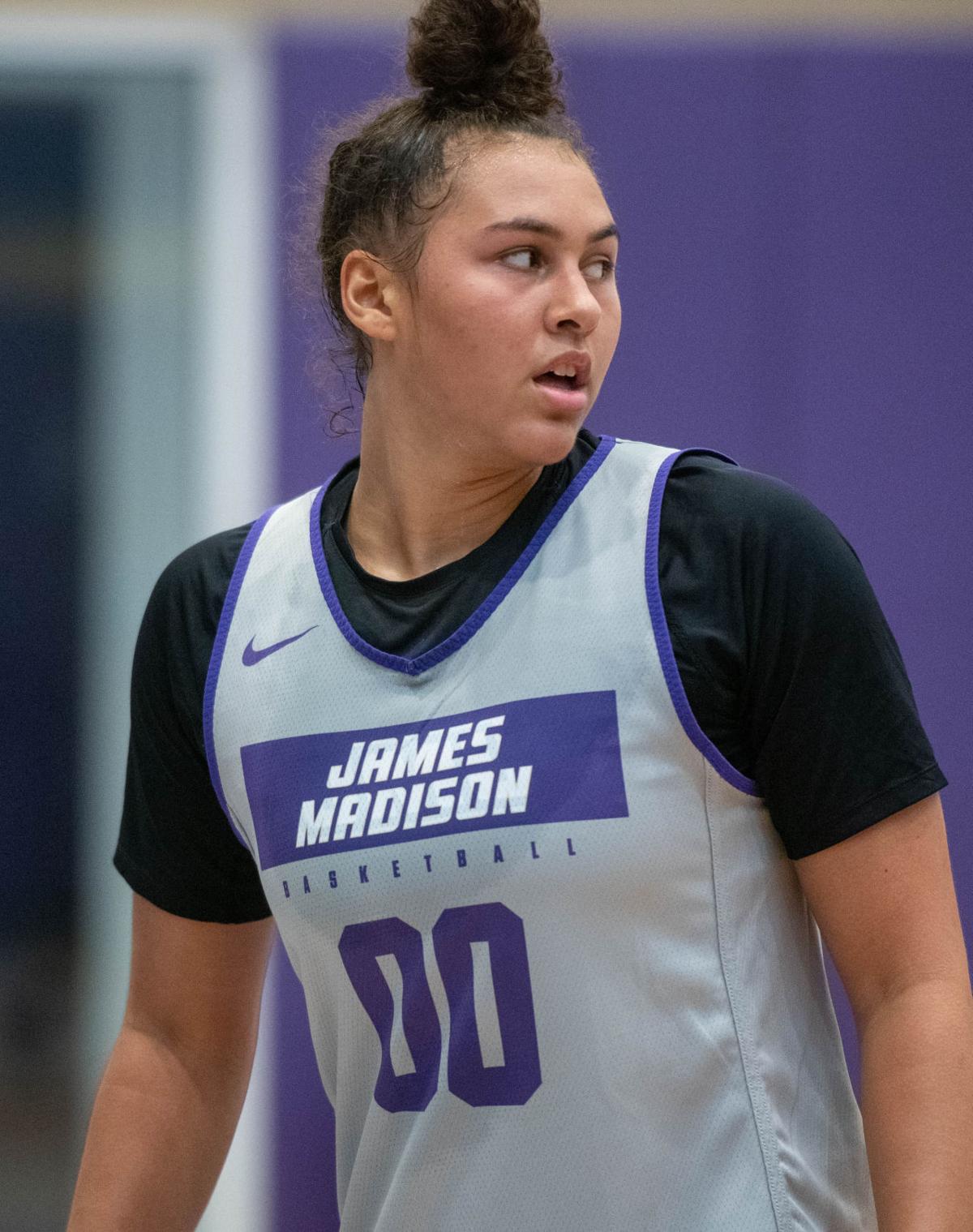 James Madison’s Peyton McDaniel looks up practices at the Atlantic Union Bank Center in September. It’s possible McDaniel will take a medical redshirt this season if she does not return to action soon.

James Madison guard Peyton McDaniel (22), the 2020-21 CAA Rookie of the Year, drives up the court against Towson guard Aleah Nelson (4) during a game last season. McDaniel has been out with a knee injury all of 2021-22.

James Madison’s Peyton McDaniel looks up practices at the Atlantic Union Bank Center in September. It’s possible McDaniel will take a medical redshirt this season if she does not return to action soon.

As James Madison gets ready for its final run through the Colonial Athletic Association, it’s seeming more and more likely the Dukes might do it without a key player in sophomore Peyton McDaniel.

JMU (4-7) is scheduled to open up CAA play Friday at 7 p.m. with William & Mary (5-6) visiting the Atlantic Union Bank Center. JMU hasn’t finished worse than second in the conference standings since coming in third in 2009, but the Dukes have played the entire season without McDaniel, the 2020-21 CAA Rookie of the Year and preseason all-conference pick.

Dukes coach Sean O’Regan said McDaniel likely won’t be available for this week’s games against the Tribe and Elon, and each game she misses going forward is one closer to shutting her down for the season and applying for a medical redshirt.

“That’s just a timing thing,” O’Regan said. “We’ve said all along, when she’s able to return, we’ll look at how many games are left. That’s the only determination on that, but she’s not ready right now.”

McDaniel, a product of Birdsboro, Penn., averaged 12.2 points per game as a freshman last season and O’Regan said in the fall he expected the 6-0 guard to be the Dukes’ second-best player this season.

But McDaniel has been dealing with soreness in her knee since before JMU’s preseason exhibition against Shepherd. Even leading into the Dukes’ season-opening victory against Virginia, McDaniel’s availability seemed to be a game-to-game issue according to O’Regan. But as the non-conference season progressed, the JMU staff began shooting for a return for conference play.

Now the issue of whether McDaniel returns at all this season is complicated by other factors. The Dukes will not play in the CAA Tournament in March, banned from the event by the other league schools after JMU announced in November it would leave for the Sun Belt Conference.

More recently, the Omicron variant of COVID-19 has already caused multiple disruptions of the CAA schedule, making it unclear how many conference games will actually be played.

McDaniel and the Dukes will have to make a decision at what point there aren’t enough games left to burn a season of eligibility.

“I don’t have to make that determination yet, but I’ve said all along, if it was going to be 18 (games) we were going to play her,” O’Regan said. “That’s her mindset too. If it’s six, then I think it (becomes) let’s bag it.”

The fact JMU struggled in the non-conference and won’t have an opportunity to play its way into the NCAA Tournament via a league tournament championship, will factor into the decision-making process.

“Honestly, this year is not a bad year to redshirt,” O’Regan said. “I hate saying that like this year doesn’t matter, but with no conference tournament and a limited number of games you’re able to play, it’s not a terrible year to have to redshirt if that’s the case.”