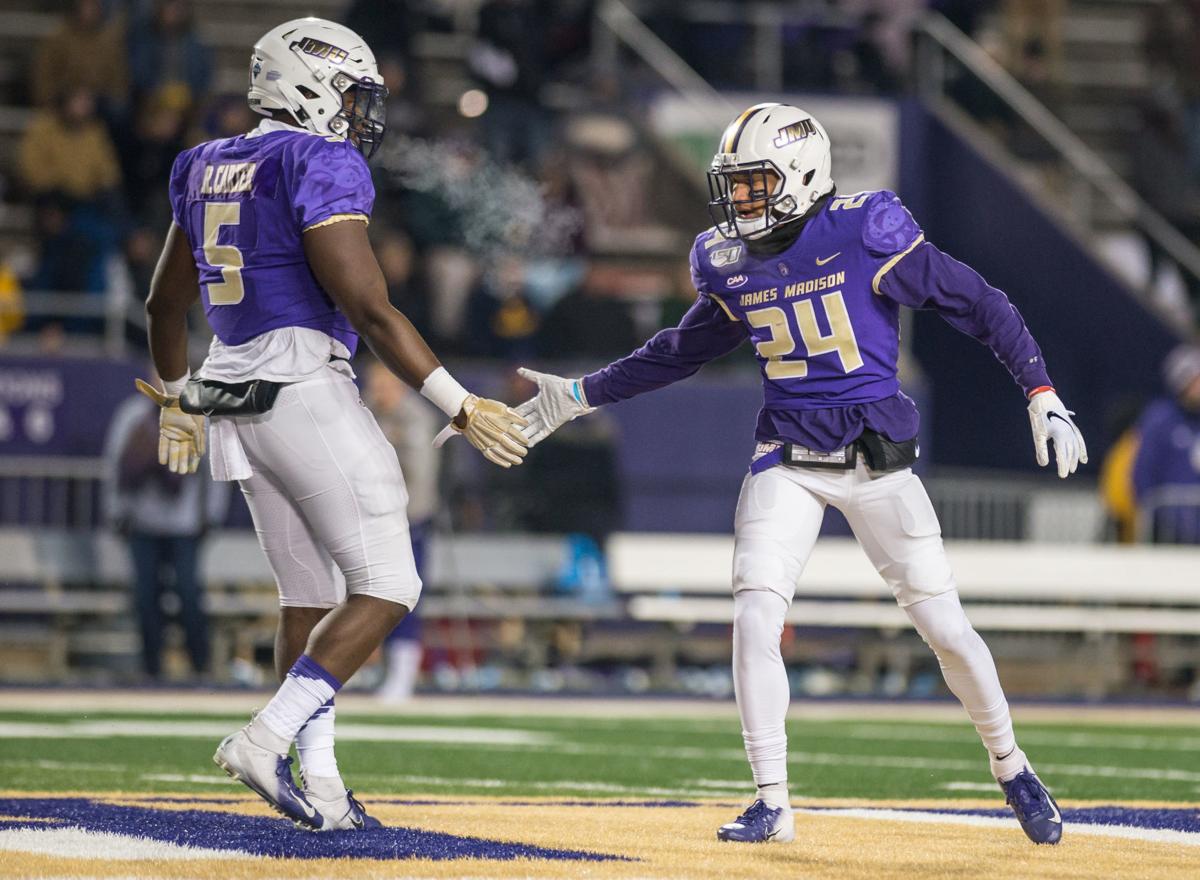 James Madison defensive end Ron'Dell Carter (5) celebrates with safety D'Angelo Amos during the Dukes' win over Weber State in the semifinals of the FCS playoffs at Bridgeforth Stadium in Harrisonburg. 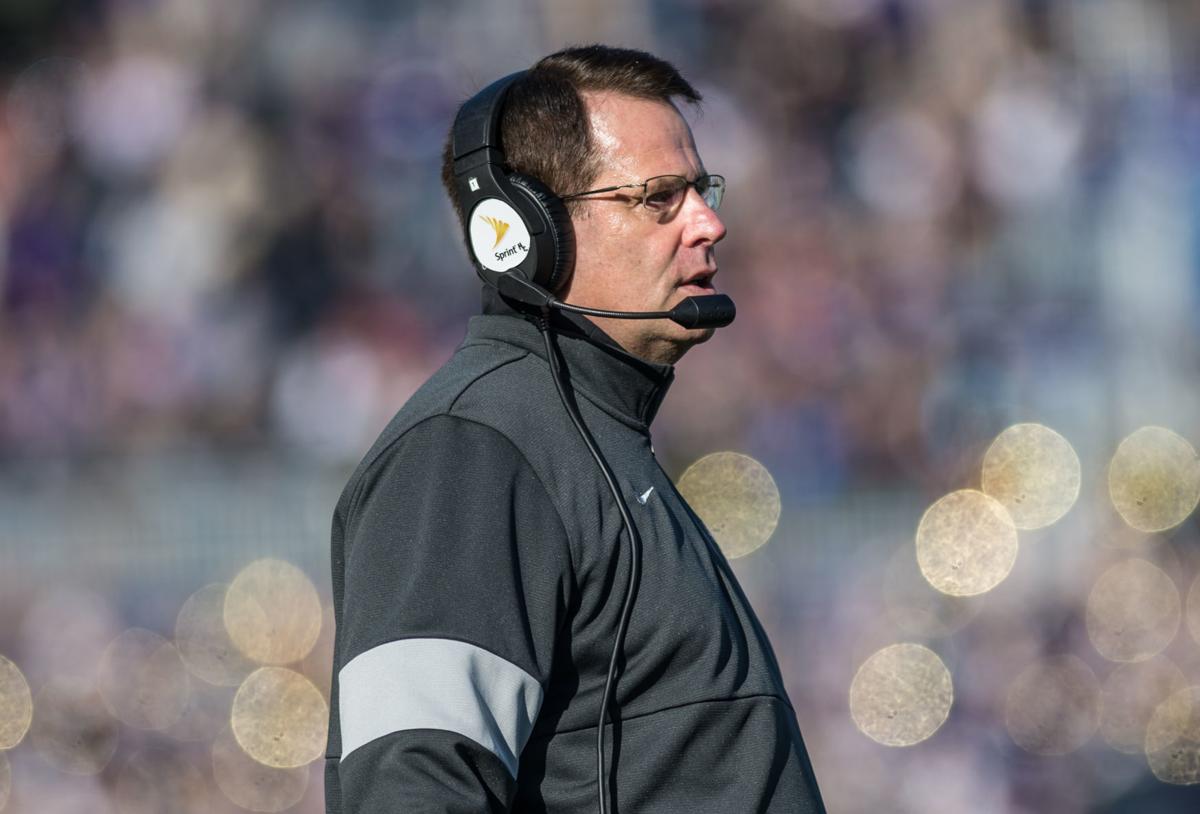 James Madison head coach Curt Cignetti looks out on to the field during the Dukes' win over Monmouth in the second round of the FCS playoffs at Bridgeforth Stadium. 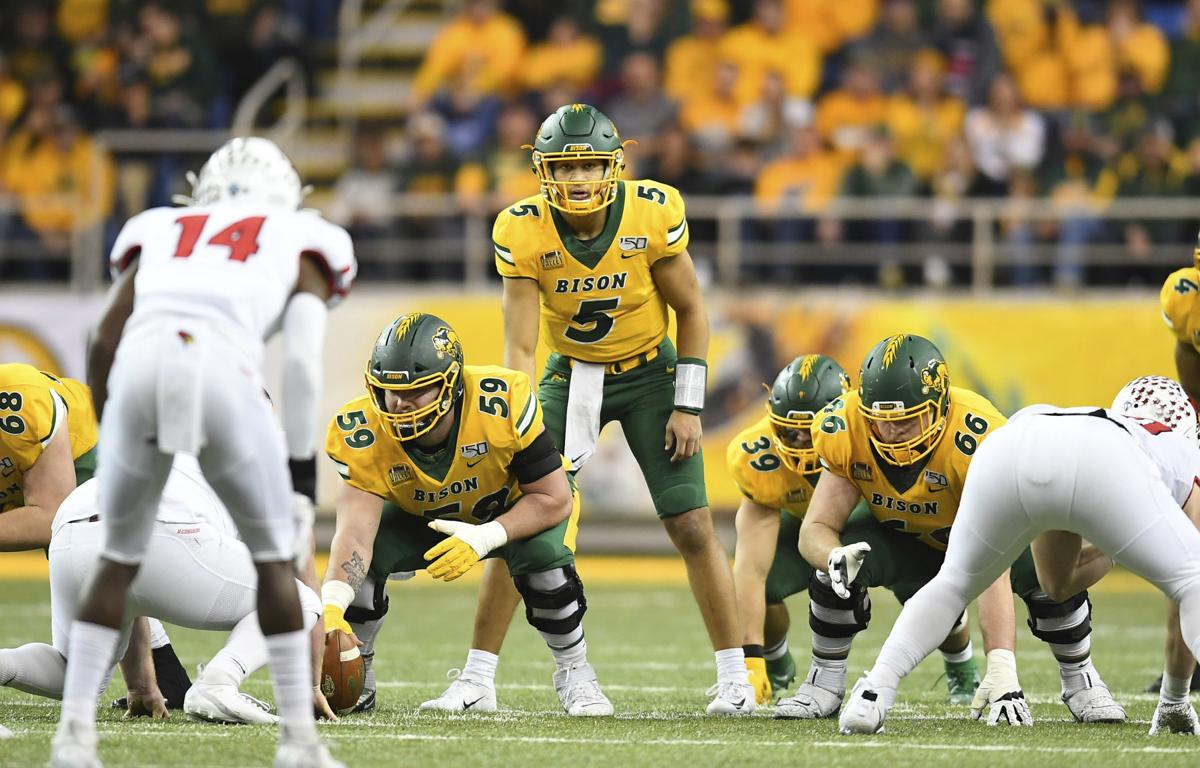 North Dakota State quarterback Trey Lance (5) calls out a play behind his offensive line during the Bison's win over Illinois State in the quarterfinals of the FCS playoffs in Fargo, N.D.

James Madison defensive end Ron'Dell Carter (5) celebrates with safety D'Angelo Amos during the Dukes' win over Weber State in the semifinals of the FCS playoffs at Bridgeforth Stadium in Harrisonburg.

James Madison head coach Curt Cignetti looks out on to the field during the Dukes' win over Monmouth in the second round of the FCS playoffs at Bridgeforth Stadium.

North Dakota State quarterback Trey Lance (5) calls out a play behind his offensive line during the Bison's win over Illinois State in the quarterfinals of the FCS playoffs in Fargo, N.D.

Regularly calm, he’ll watch the play in front of him, chat with his assistant coaches over the headset and jot down notes based on what he sees.

But when the first-year James Madison coach leads his Dukes in the FCS national championship game against North Dakota State at noon, there is one abnormality he must monitor and track in his notes – how the depth of the Bison affects JMU’s fronts.

Normally, when the Dukes show up they unquestionably boast the better built offensive and defensive lines to withstand whatever test they may face.

Cignetti said, in his preparations for top-seeded NDSU, he came away impressed with the eight-man rotation the Bison typically use for their defensive line and all the different running backs who are capable of shredding an opposing defense and wearing down the front of the other team.

There are three North Dakota State running backs – Ty Brooks, Adam Cofield and Kobe Johnson – with at least 660 rushing yards entering the title-game clash at Toyota Stadium in Frisco, just north of Dallas. Brooks paces the Bison with 940 rushing yards while Cofield has a position-group best 11 touchdowns on the ground.

“It’s a great feeling to be able to be in that type of room,” Cofield said, “where guys aren’t selfish and are willing to do anything to help out the team. [NDSU running backs coach Dan] Larson made it clear that when you get your opportunity, you better be competing at a high level, and every week we strive to do that.”

The most comparable backfield across the FCS to NDSU’s is likely JMU’s rotation of running backs. But even that’s dwindled down lately from a four-man group to a platoon of juniors: Percy Agyei-Obese and Jawon Hamilton. Occasionally and as long as freshman running back Latrele Palmer is healthy, he’s deployed when Cignetti calls for a power back in the second half.

“You’ve got to be ready for that and have your conditioning ready,” Carter said. “And then when the fourth quarter comes, you cannot give up, because they may have a guy coming in who hasn’t really played all game and he has fresh legs coming in to try to run you over.

On top of that Cignetti and Carter said even though the Bison won’t use a rotation of offensive linemen, the ability of said group creates a strength-on-strength encounter against the Dukes’ defensive line.

Led by Daka’s 16.5 sacks and 26.5 tackles for loss, JMU has racked up 46 sacks and 131 tackles for loss entering Saturday. North Dakota State offensive linemen Zack Johnson, Dillon Radunz and Cordell Volson were all first-team Missouri Valley Conference selections. The Bison give up the fifth fewest sacks per game (.80 sacks) in all of the subdivision.

Cignetti said: “Their offensive line is big and they’re good. They have three all-conference players and they play four different tight ends, two different 250-pound fullbacks and four different running backs and other than their [offensive] line, which they don’t sub for, they’re playing a lot of people at the other positions.”

As for JMU’s offensive linemen, according to Cignetti, they’re expecting to see waves of North Dakota State defensive linemen led by senior defensive end Derrek Tuszka, who tallied six tackles, two sacks and two tackles for loss in the Bison’s win over the Dukes in the 2017 championship game.

“They play a lot of people. That’s the thing,” Cignetti said. “The second series of the game, they may have four new guys in there on the defensive line. And they do that so that at the end of the game they’re fresh.”