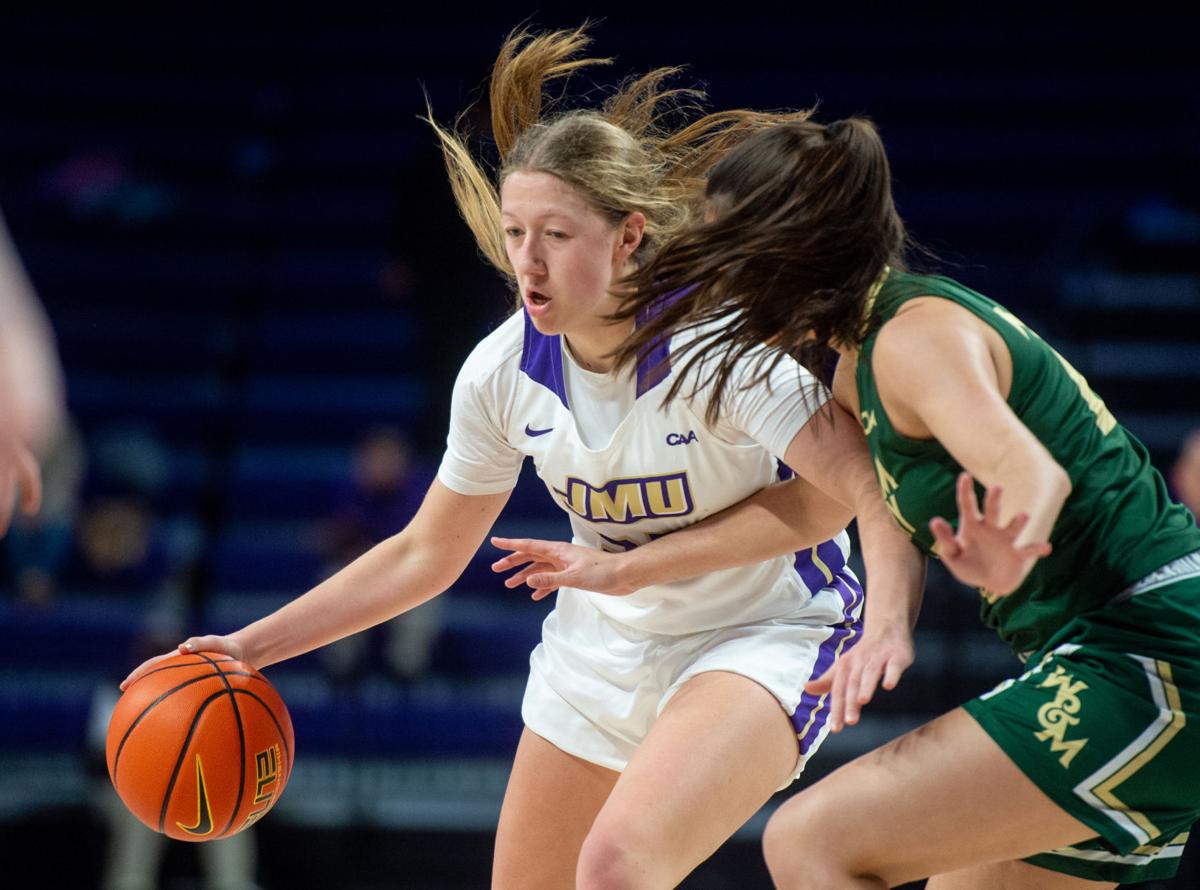 James Madison forward Steph Ouderkirk (33), a Spotswood alum, drives up the court against William & Mary’s Ava Stevenson (24) during the Dukes’ win on Friday in Harrisonburg. Ouderkirk earned her first career start in the game. 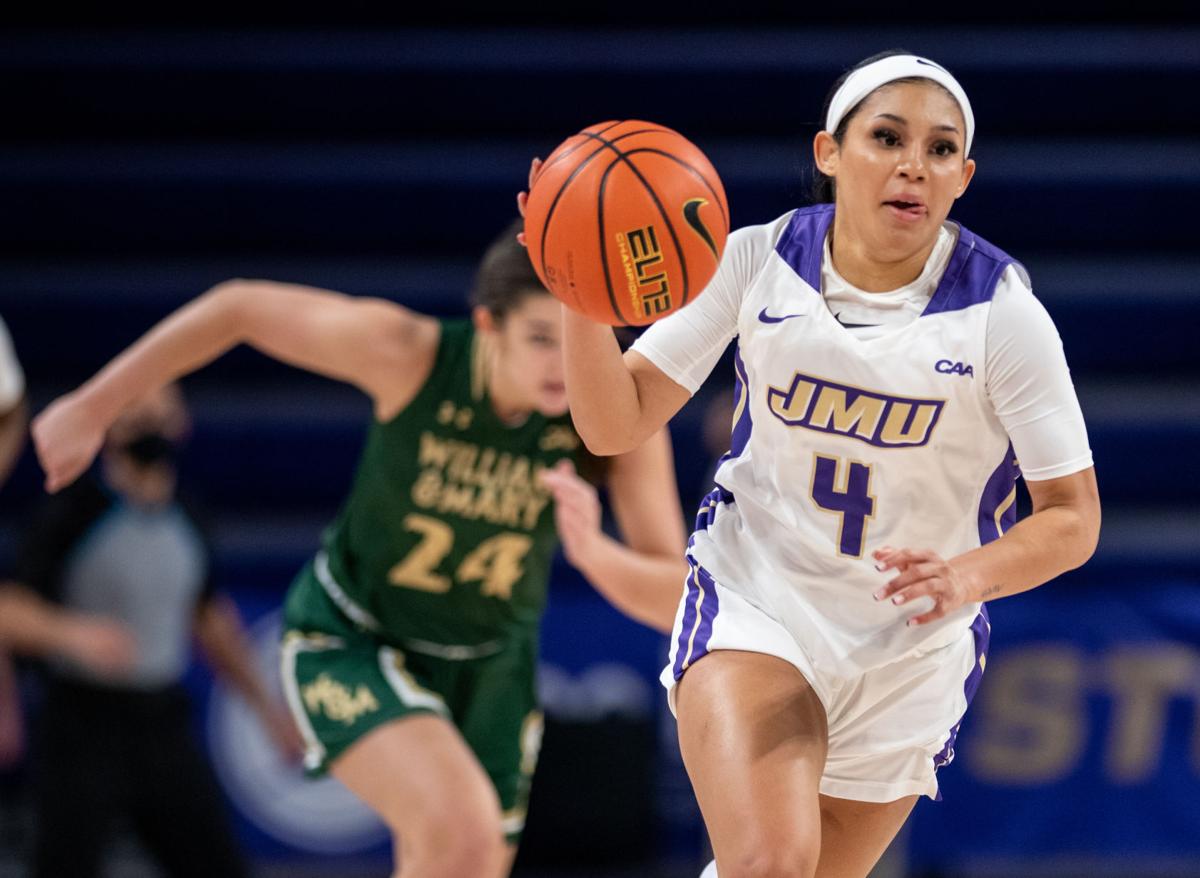 James Madison’s Madison Green (4) drives up the court on a fast break during the first half of Friday’s game against William & Mary. Green hit two first-quarter 3s in the win. 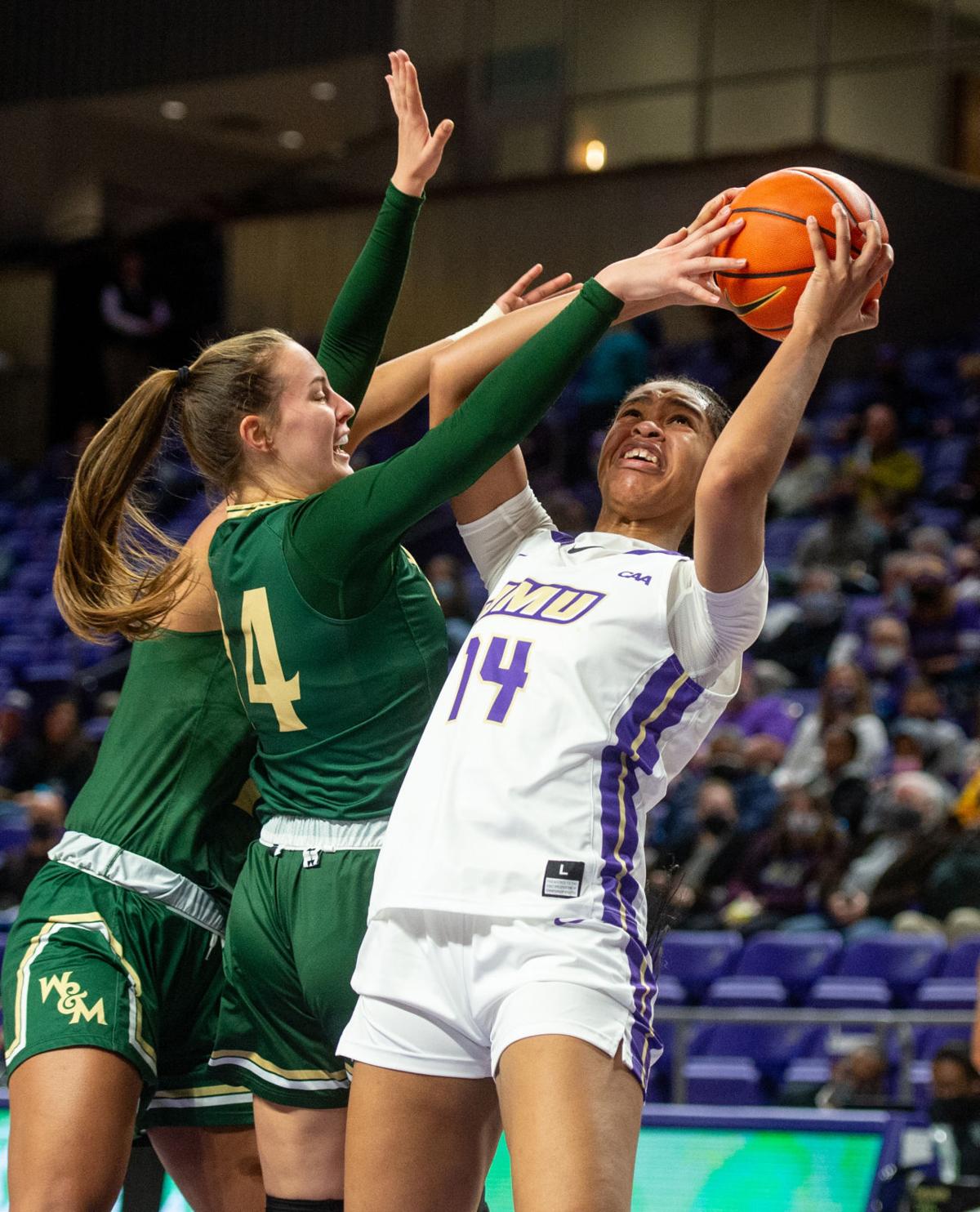 James Madison forward Steph Ouderkirk (33), a Spotswood alum, drives up the court against William & Mary’s Ava Stevenson (24) during the Dukes’ win on Friday in Harrisonburg. Ouderkirk earned her first career start in the game.

James Madison’s Madison Green (4) drives up the court on a fast break during the first half of Friday’s game against William & Mary. Green hit two first-quarter 3s in the win.

The Dukes got a first-career double-double from sophomore center Anna Goodman and cruised past William & Mary as JMU’s CAA farewell tour began with a 67-39 rout.

JMU (5-7, 1-0 CAA) suited up just nine players in its first game since defeating George Mason on Dec. 20. Claire Neff, who had started recent games before Christmas sat on the bench with a minor injury and Jaylin Carodine was not with the team, which has dealt with some COVID-19 issues following Christmas.

Goodman, who grew up less than 30 minutes from the William & Mary campus in Newport News, led the Dukes with 16 points and 12 rebounds, both career-highs. Jamia Hazell added 12 points for the Dukes while Bre Bellamy led the Tribe (5-7, 0-1 CAA) with 15 points.

“It feels pretty good to know what we should beat William & Mary and I am from the area,” Goodman said. “My teammates helped find me. I moved around the basket so they could get me the ball, but my teammates finding me was the biggest thing.”

It was also one of JMU’s best defensive efforts of the season, holding the Tribe to 25 percent shooting and limiting Sydney Wagner and Riley Casey, who each came in averaging double figures, to a combined 11 points.

“We had to handle a little adversity with Jaylin and Claire being out for this game,” JMU coach Sean O’Regan said. “I thought we were really committed on the defensive end and that was what I was most proud of for this particular game. Sydney Wagner is a really good player, but it’s like the old days and you come into JMU and we don’t let you get what you want.”

After a few weeks off and games against Delaware and Drexel postponed, the Dukes didn’t show any signs of rust in the game’s opening seconds as Ouderkirk found Goodman all alone in the lane for an easy bucket. The next time down the court, it was Green who nailed a wide open 3-pointer to give JMU a quick five-point lead.

All-in-all, those were signs of things to come. JMU, which entered the game shooting 21.5 percent from 3-point range, was much better in the first half. The Dukes hit 5-of-13 from beyond the arc in the opening 20 minutes with each make seeming to come anytime William & Mary showed signs of closing the gap after the Dukes

The Dukes were also able to find Goodman for open looks in the paint and after she followed up Ouderkirk’s second 3-pointer of the evening with a layup in transition, Tribe coach Ed Swanson called timeout with his team trailing 27-12 with 3:15 remaining in the second quarter.

By the time Green scored on a breakaway layup in the final minute of the half, JMU had a 31-14 lead it would take into intermission despite going 20 minutes without a field goal from Jefferson.

As the second half began, Jefferson, who came in averaging 17.6 points per game, started to get going and Goodman continued to give the Tribe trouble in the paint. Jefferson scored on back-to-back possessions for the Dukes, then starting drawing double teams, allowing her to dish off to Goodman for easy baskets.

After Jefferson handed her second assist in less than two minutes to Goodman, the Dukes had opened up a 22-point advantage with 3:30 left in the period.

The Dukes are scheduled to face Elon at home Sunday at 1 p.m. The Phoenix (8-3, 0-1) are coming off a loss at Towson in their CAA opener on Friday.

“It was kind of nice to restart,” Hazell said. “It was the start of conference play and we said our record was 0-0. We don’t care about our other losses. We’re starting over and trying to lead our way to be regular-season champs.”