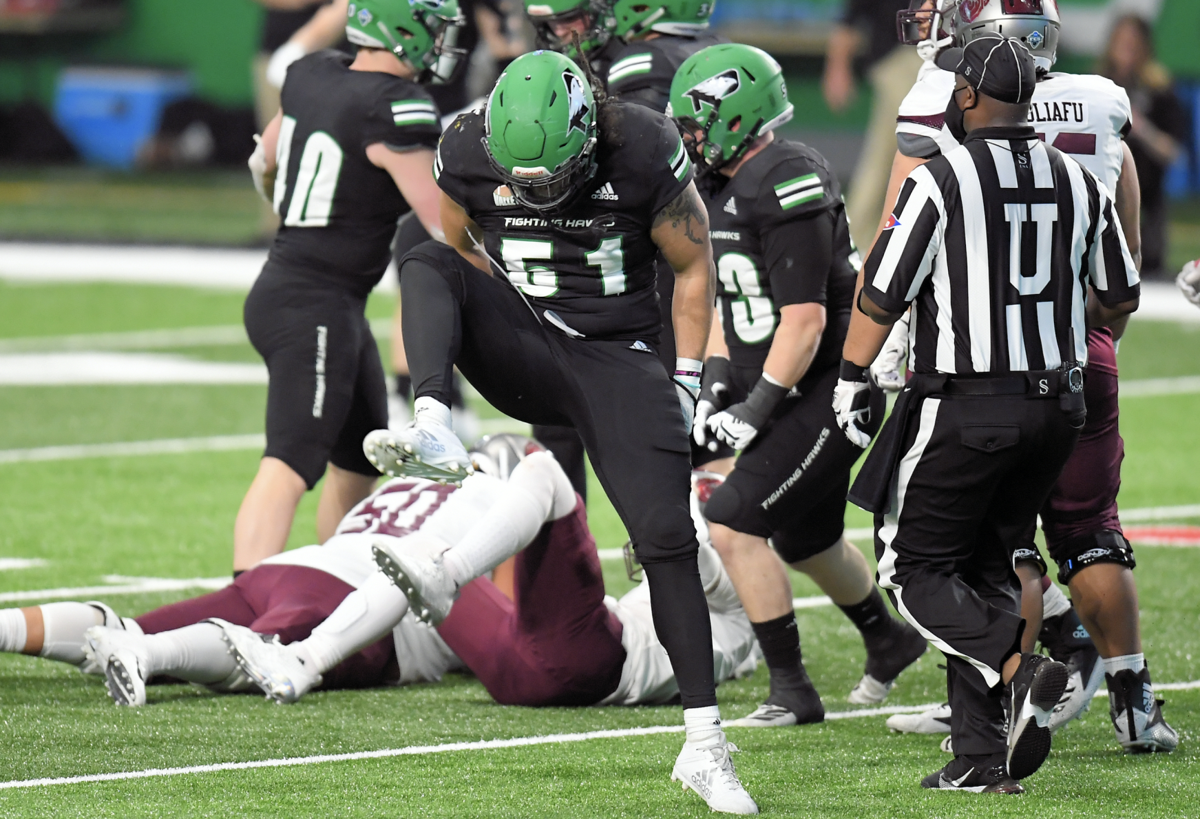 North Dakota’s Quintin Seguin celebrates after a sack during the Fighting Hawks’ win over Missouri State this past Saturday in the first round of the FCS playoffs in Grand Forks, N.D. 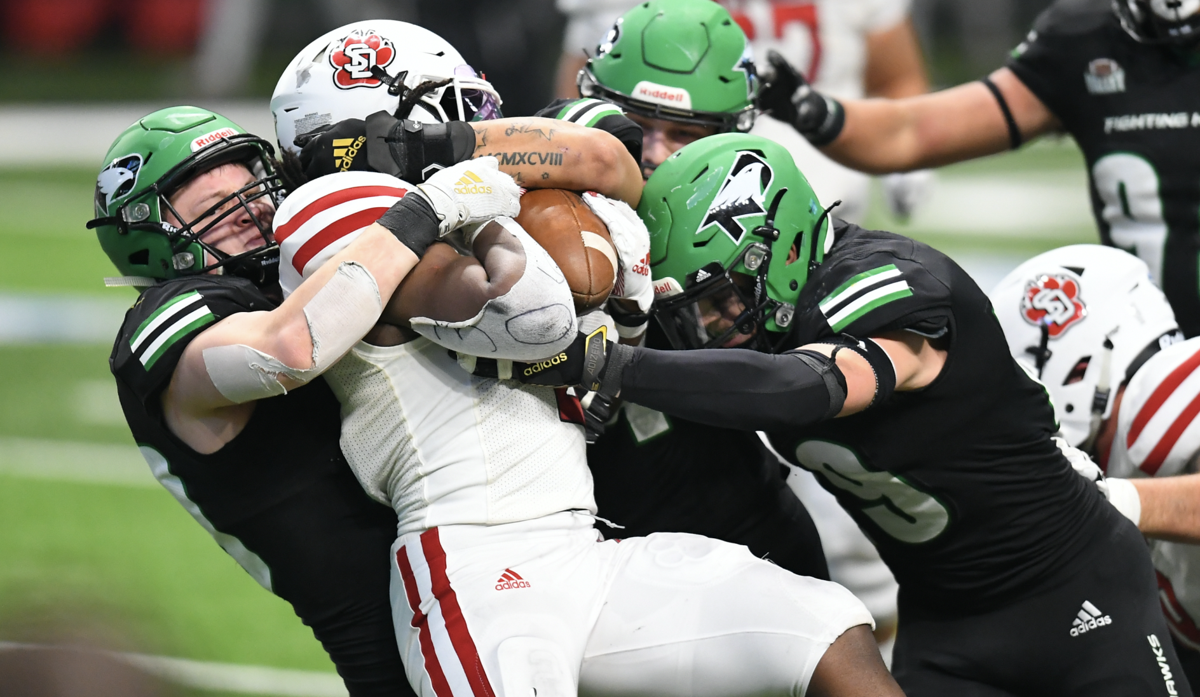 North Dakota’s Quintin Seguin celebrates after a sack during the Fighting Hawks’ win over Missouri State this past Saturday in the first round of the FCS playoffs in Grand Forks, N.D.

Their outside linebackers and safeties lurk, waiting for their turn to ambush the opposing quarterback.

North Dakota’s aggressive defense is unforgiving, and uncomfortable to play against.

“We just like to pressure teams,” Fighting Hawks senior linebacker Jaxson Turner said. “We play a defense that likes to attack and we get downhill. That’s been our style.”

Turner and company visit No. 3-seed James Madison for a 6 p.m. kickoff on Sunday in the FCS national quarterfinals at Bridgeforth Stadium, and the Dukes know they’ll see a three-down front with the rest of the UND defense harassing the backfield in numerous ways.

The Fighting Hawks’ 3.67 sacks per game are eighth-best nationally and their 22 total sacks make them the only team to play six or fewer games in the subdivision with 20 or more sacks this spring. They’ve notched multiple sacks in five of their six contests.

“They probably have a bigger [defensive] package than we’ve seen in some time and they’re really good at what they do,” JMU coach Curt Cignetti said.

Cignetti said the additional day between the first round of the playoffs, which was held this past Saturday, and the quarterfinals allows him and his staff to prepare their offensive players adequately for the various blitzes North Dakota can deploy.

In their opening-round win over Missouri State, the Fighting Hawks tallied eight sacks. Turner and fellow outside linebacker Josh Navratil each had a pair and four other players had one.

Turner leads the team with five sacks this season. Navratil has 4.5 sacks and nine other defenders have at least one.

“They just really blitz from everywhere,” said Cignetti, whose Dukes give up on average 1.5 sacks per game. “They’ve got it all to try to keep you off balance. It’s five-man blitzes, six-man blitzes. They’ve got a lot of sacks on the year. … The linebackers are really big and the issue there becomes pass protection when they blitz when your [running] backs are matched up on 235-pound, 240-pound guys. The safeties are big and there’s lot of movement up front.”

His tactics paired with those of second-year North Dakota defensive coordinator Brett Holinka have given the unit an abundance of confidence. It’s an added bonus so many of the starters for the Fighting Hawks’ defense completely understand the system they’re playing in.

“Their people are in the right places, so they’re very disruptive,” Cignetti said.

That could be an edge for UND on Sunday against the Dukes’ offensive line, which doesn’t have the same experience JMU offensive lines had in 2016, 2017 and 2019 when the program went on deep playoff runs to reach the FCS national championship game. Because of the season-ending injury to All-American right tackle Liam Fornadel, the Dukes are starting true freshman Cole Potts at right guard and have shifted first-year starter Nick Kidwell, a sophomore, from right guard to right tackle to fill Fornadel’s spot.

It’s on that group, which includes senior All-Colonial Athletic Association performers – tackle Raymond Gillespie and guard Truvell Wilson – on the left side, as well as quarterback Cole Johnson to identify where the pressures are coming from.

“We try to do some of it scheme-wise, but it’s really our guys,” Schweigert said. “It’s their relentless effort. We bring four and five and we try to change it up with which guys we’re bringing to force teams to prepare for that. But it’s really the guys, executing scheme and the defensive staff trying to figure out what’s best to run in certain situations.”

Schweigert said their usual plan of trying to take down the opposing quarterback doesn’t work as well if their opponent finds success running the football.

And JMU, which is fourth-best in the FCS for rushing while averaging 248.3 yards on the ground per game, ran for over 300 yards against VMI’s three-down front this past weekend.

“And really, to get quarterback sacks you have to have success on the early downs to get teams into throwing situations,” Schweigert said. “And that’s really going to be key on Sunday that we create some negative plays and get James Madison having to throw the football. And that’s a real challenge and hard to do, we know that. But we’re going to work hard to get ready for that.”

Said Turner: “We’re going to have to stop the run on defense.”