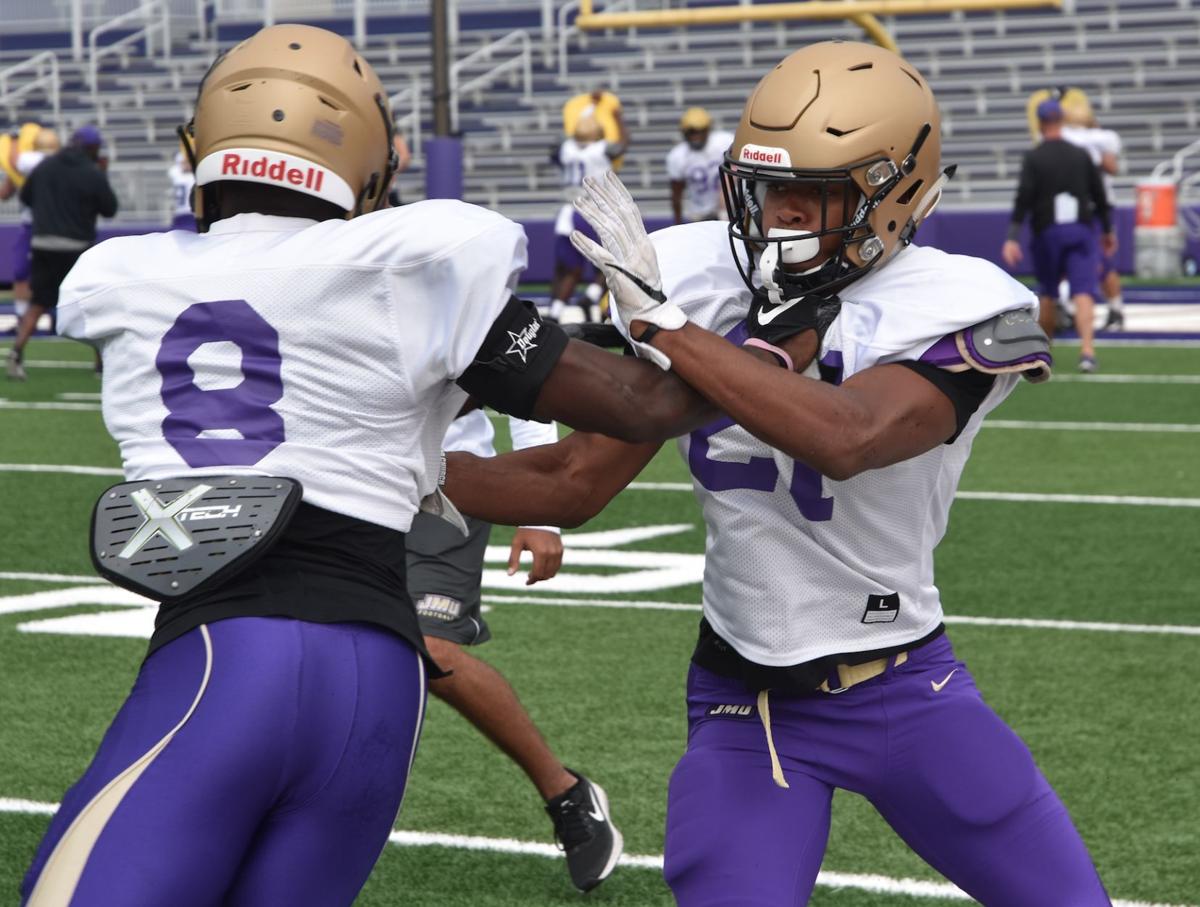 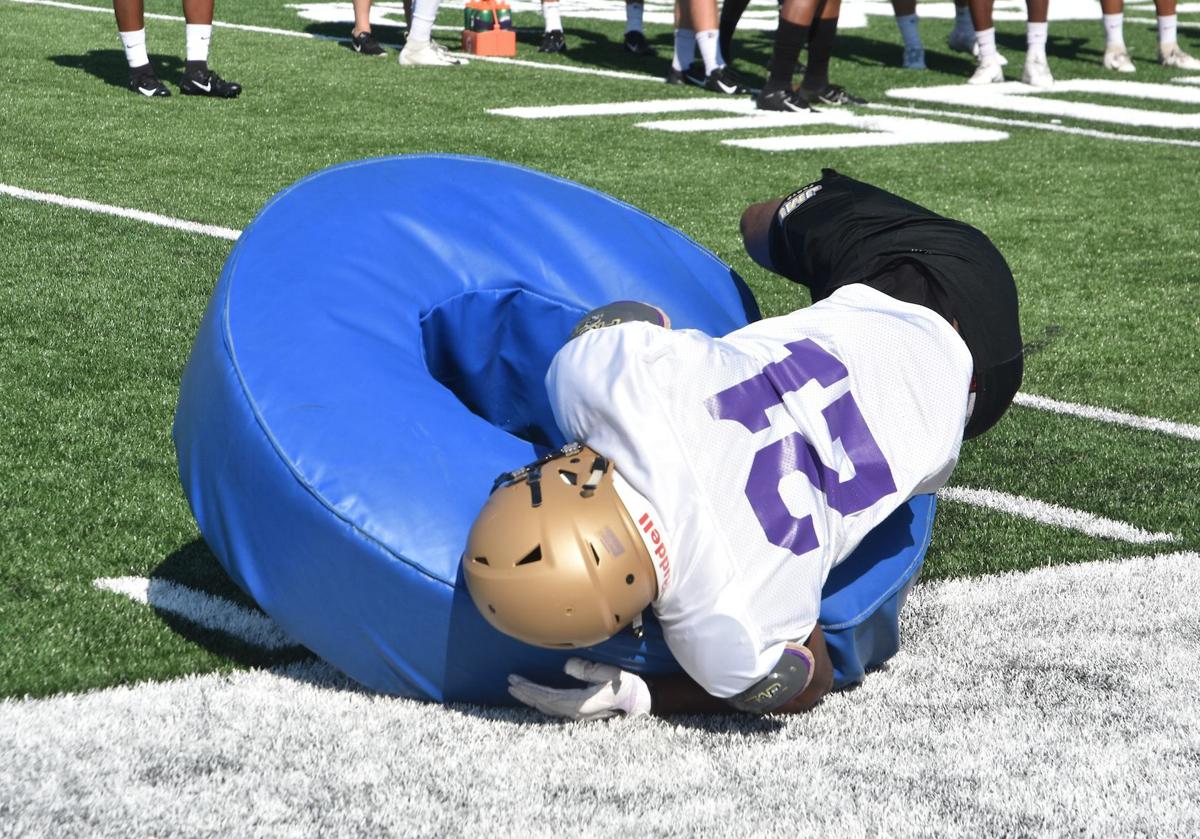 HARRISONBURG — It’s the tug-of-war Adam Smith knew he put himself in the middle of since arriving at James Madison four years ago.

“I don’t know if I can answer that one on tape,” Smith said with a grin. He knew that if he picked one or the other, either his coaches or his professors could get upset. “But I definitely study both.”

The question for the Dukes safety and JMU engineering student was about what he dedicates more of his time to — studying game film to maintain his all-conference level of play on the field or the textbooks to keep the great standing in his rigorous courses on campus?

Smith’s answer walked the same perfect line he has throughout his time at Madison.

“We’ve had football players in engineering before,” said Steven Harper, one of Smith’s professors. “But what’s unique about him is he’s upfront on the team and is starting. But at the same time, he realizes football might not be his lifelong thing, so he is giving equal time to his studies, too.”

Of the 104 players listed on JMU’s roster, Smith is one of two majoring in engineering. He’s on track to graduate on time this coming May, but admitted balancing all the responsibilities of playing football for one of the premier teams in the FCS and the demanding academic program he’s part of hasn’t made it easy.

“In the beginning it was harder than I expected it to be,” Smith, a senior, said. “I think those nights when you’re up at three [o’clock] or four [o’clock] in the morning, and you’re not even trying to study for a test, but finish your homework, those are the nights that you really dig deep and ask, ‘Do I really want to do this?’”

Smith said he’s never considered changing majors and would never give anything less than his best effort for the Dukes.

Last year, the Charlotte, N.C., native, stepped in seamlessly for former All-American safety Raven Greene, who is now with the Green Bay Packers. In his first year as a starter, Smith tallied 68 tackles, a sack and three interceptions and was named an All-Colonial Athletic Association first-team choice. As a freshman and sophomore, he primarily contributed on special teams and blocked a punt against Sam Houston State in the 2016 FCS quarterfinals.

“His approach to everything he does is so mature,” said JMU safeties coach Ryan Smith. “He approaches the game of football like it’s his only job. He approaches his academics like that’s his only job. I think he’s locked in and that he’s very, very focused in every endeavor that he does.”

“If he knows he needs help or tutoring or whatever it is academically,” Kyllo said, “he’s always in our office trying to figure out how we can help him and how he can manage his time better.

“He does a great job of also talking with professors and making sure they understand his time management, so they know he wants to be the best student he can be. And then we do a great job of communicating with coaches about his schedule. They look out for him and make sure he’s getting all of his work done and that he’s staying on track to graduate, but also doing well on the football field.”

The time of year that gets a bit crazy for Smith is when the postseason and engineering finals hit during the last weeks of the fall semester, he said. But by then he’s already established strong relationships with his professors and they’re more understanding to let him take a test early or make one up.

“Before we find out the dates of the games, I tell the professors, ‘Look, this is playoff time and I’m not sure when the games will occur or when we’ll have to leave or what may happen,’” Smith said. “But I tell them if they’re willing to work with me that might be the best thing possible for both of us.”

Harper said Smith is easy to work with.

“He tries to keep things going well,” Harper said, “so it doesn’t become a problem or panic situation at the end. That’s one of the big things. The other is he does do the work outside of class.

“When he was in my circuits class, it was during the season and we basically made arrangements since he had obligations to the team that he wouldn’t be at all of the Friday classes. We made arrangements — on the weeks that he was gone — for him to come in on Thursdays where we’d have a one-on-one session to talk about homework and what was going on in the class so he wouldn’t fall behind.”

His success in Harper’s class and others like it within JMU’s engineering department led to a summer internship. Smith said he worked 40 hours a week this summer for the biomedical engineering team at Hollister Incorporated in Stuarts Draft. He’d drive down Interstate 81 daily after finishing morning workouts with the Dukes.

“Adam is a great kid,” his teammate and JMU senior linebacker Mike Cobbs said. “Smart as anybody I’ve ever seen, but he’s cool with everybody in the locker room, too. He’s always joking, always laughing, but knowing he can balance that tough engineering degree and then come out here to handle his business at a very high level — he’s an All-CAA player — kudos to Adam.

“I want him to keep doing his thing. He’s doing something I couldn’t see myself doing.”

Smith is a preseason All-CAA choice for 2019 and one of 10 returning starters for JMU’s defense. A strong season for Smith could earn him an opportunity in the NFL.

“He’s just as important as any piece we have on our team,” Ryan Smith said. “Athletically, he can do it all at the field safety position. He can win the game, win reps and win plays by his instincts and his smarts on top of his athleticism. And I think, at our level, he’s the full package at that spot. But him just being able to be a leader, communicate and bring on the younger guys, and being able to talk through situations with the younger guys, it’s what we want.”

And the leadership Adam Smith brings is the trait no one at JMU is taking for granted.

And assuming Smith does as well as he’s done in the classroom the past three years again this year, he’ll have options to do what he wants in the biomedical engineering field.

He said can take what he learned during his internship and apply it to the job he lands after college.

“He has a great fallback plan, so to speak,” Harper said. “He will make a solid engineer because he seems to have that drive and that grit to actually look for good solutions, and it’s probably similar to the way he does stuff in his football because he has to adjust on the fly while he’s out there.”

Smith said his only goal for the football season is to help JMU win a national championship for the second time in four years. He was a freshman on the Dukes’ 2016 title team after being part of former JMU coach Mike Houston’s first recruiting class at the school. Smith was one of two players, along with defensive end Bryce Maginley, that Houston had previously recruited at The Citadel and continued to recruit when he got the job at JMU.

“I definitely want to win a national championship,” Smith said. “And then personally, I just want to play well. I don’t want to put a cap on anything, but if I don’t play well this year, none of that other stuff is possible.”

When James Madison begins its campaign next week at West Virginia this is who will play pivotal roles for the Dukes.