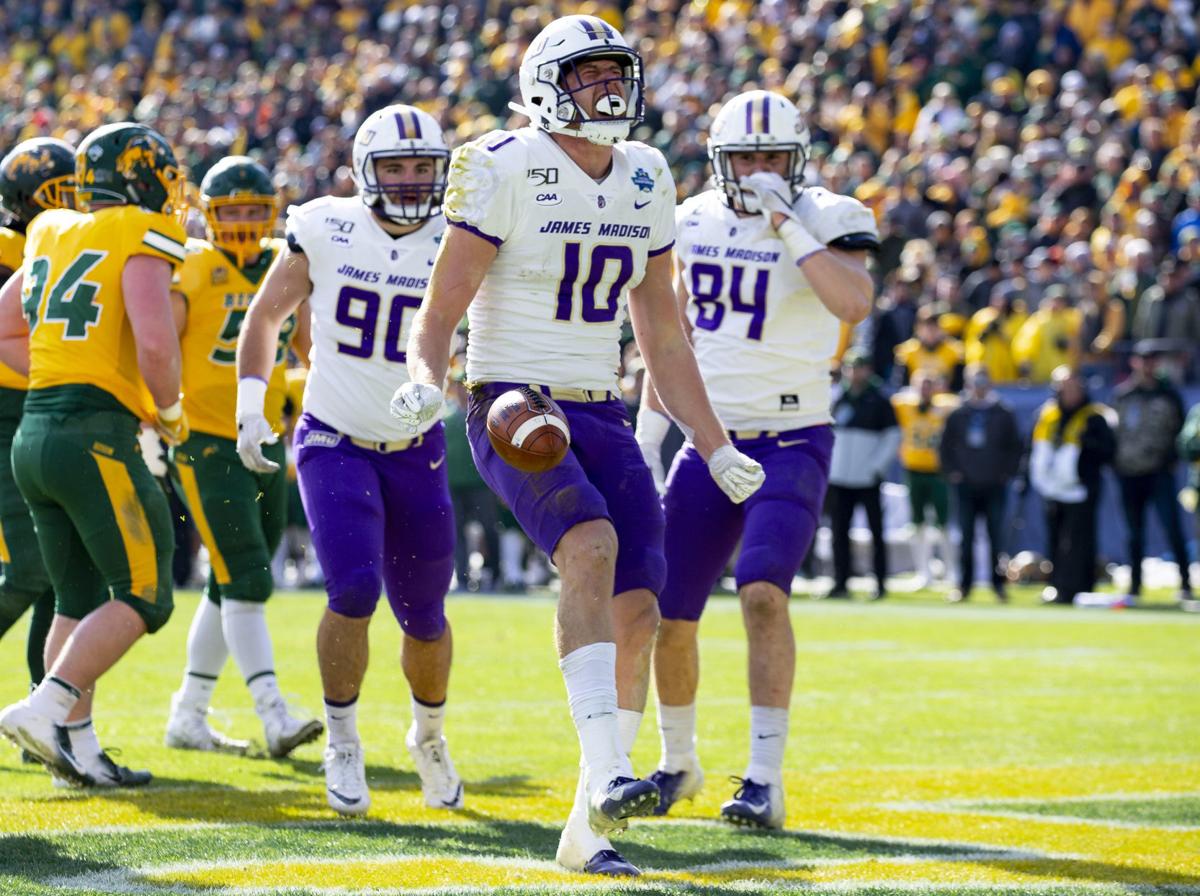 James Madison wide receiver Riley Stapleton (10) celebrates after scoring a touchdown during the second half of the FCS championship game against North Dakota State on Saturday in Texas. 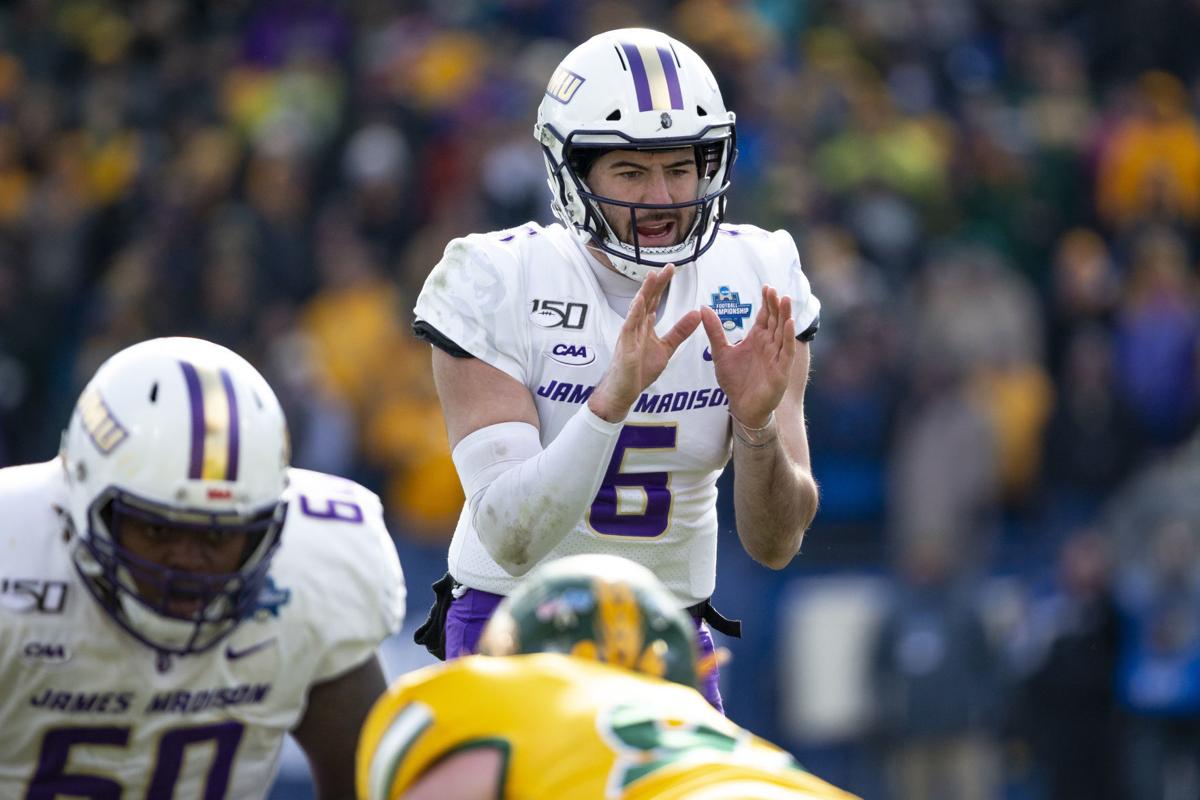 James Madison quarterback Ben DiNucci (6) waits for the ball to be snapped during the second half in Saturday’s game.

James Madison wide receiver Riley Stapleton (10) celebrates after scoring a touchdown during the second half of the FCS championship game against North Dakota State on Saturday in Texas.

James Madison quarterback Ben DiNucci (6) waits for the ball to be snapped during the second half in Saturday’s game.

FRISCO, Texas — The aftermath is most difficult to fathom as the brutal realization sets in.

“I sure will miss seeing these seniors around,” James Madison coach Curt Cignetti said. “They did a great job. I feel so bad for them.”

JMU completed the longest campaign in its history, winning more games in 2019 than the school’s 2004 championship-winning squad did and as many as the 2016 title-winning bunch had. But the Dukes won’t get the rings or the trophy to prove it.

Saturday’s 28-20 FCS championship game loss to North Dakota State was a severe disappointment for a group of upperclassmen vying to cement an everlasting legacy as those banner JMU teams of the past had done.

And even though the Bison pulled off a fake field goal for a touchdown and their sensational freshman quarterback Trey Lance carved the Dukes’ defense, the outcome wasn’t decided until JMU senior quarterback Ben DiNucci was intercepted with two seconds left to play while throwing into the end zone trailing by eight.

Instead of the improbable comeback win, the abrupt end sent the Dukes back to Virginia without any celebration.

“It’s tough to look back right now,” fifth-year senior wide receiver Riley Stapleton, who hauled in a 5-yard touchdown from DiNucci to cut NDSU’s lead from a two-score advantage to a one-score lead with 6:55 to go, said as he fought off tears, “just because this hurts so much, but I wouldn’t trade it for the world.

“It’s tough to put it into one or two sentences, but it’s been an amazing experience and I wouldn’t change it for the world. JMU holds a special place in my heart.”

Dukes fifth-year senior cornerback Rashad Robinson said: “Honestly, I just sat in there with my shoulder pads and jersey on and it didn’t even feel real. … This was really my last time running out of that tunnel playing for JMU.”

Saturday also marked the last time DiNucci, Stapleton, Robinson and the rest of the Madison seniors would all be in the same place at the same time. And that class is the winningest in program history as the fifth-year seniors compiled a 60-11 record, which includes a 51-8 run over the last four seasons.

“I kind of wish I would’ve came here as a true freshman,” senior defensive end Ron’Dell Carter, who spent the first two seasons of his career at Rutgers, said. “I wish I wouldn’t have went anywhere else because this place is just so special and those guys in that locker room, I couldn’t trade them for the world. Win, lose or draw, I’m with those guys to the end. Half those guys, almost all those guys are probably going to be in my wedding. That’s how close we are and that’s just the truth.”

Carter was the Colonial Athletic Association Defensive Player of the Year, a consensus All-American and the runner-up for the Buck Buchanan Award.

DiNucci was the CAA Offensive Player of the Year, and Stapleton, Robinson, linebacker Dimitri Holloway and center Mac Patrick were all integral parts of the program for at least the last three seasons. Patrick started 44 consecutive games at his position.

“Just to be able to be part of this thing,” DiNucci said, “get to play in this game and have this type of experience. I had so many friends, family and people from my hometown here, so just to be able to have them see me play.

“So being able to pass that torch down to these underclassmen and tell them that there’s a lot that goes into this, don’t take it for granted and it’s one of those once-in-a-lifetime experiences that you’re not going to be able to get back when it’s over, I sure hope this senior class left an impact on the program.”

Cignetti said the entire group of seniors helped him thrive in his first year at the helm of the Dukes.

“Obviously you’re not going to get much done without great senior leadership,” Cignetti said. “But I think these guys were hungry as a team coming off of last season. And I’ve been doing this a while. They understood why we did what we did in all facets of the program.”