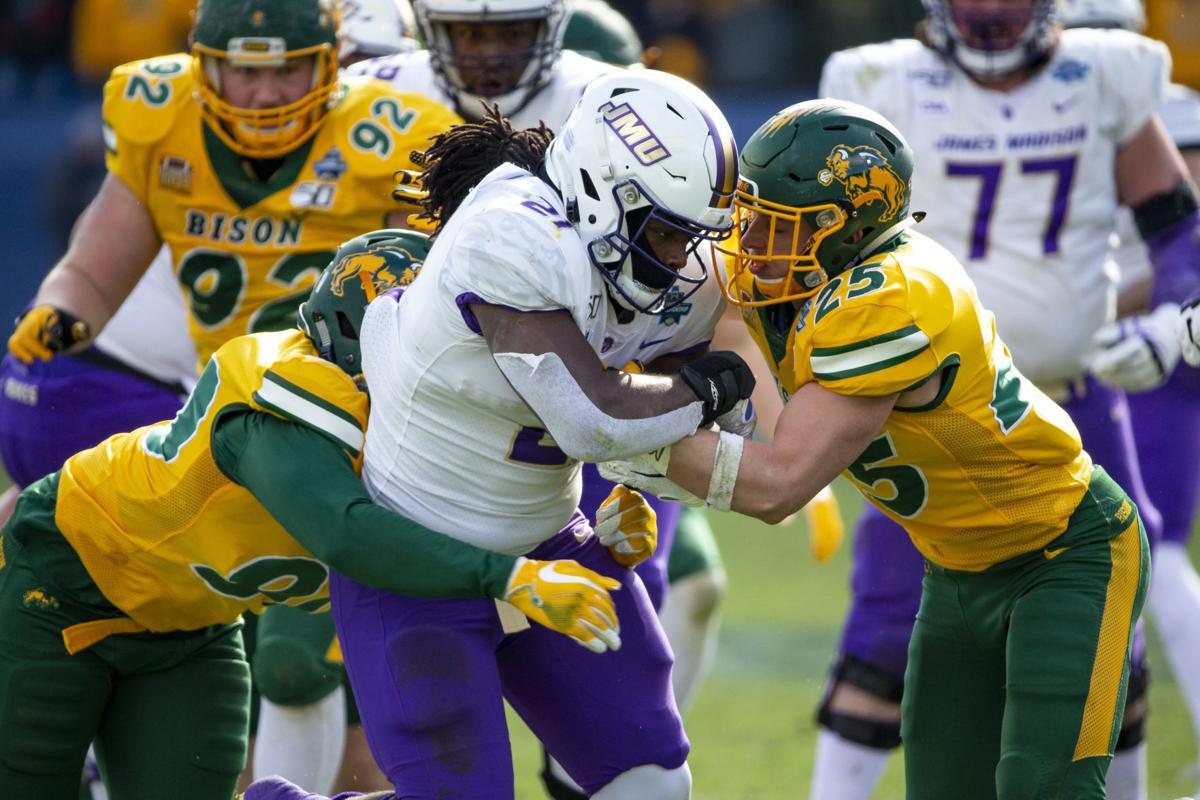 James Madison running back Latrele Palmer (21) carries the ball against two North Dakota State defenders during the Dukes' loss to the Bison in the FCS national championship game at Toyota Stadium in Frisco, Texas on Saturday. 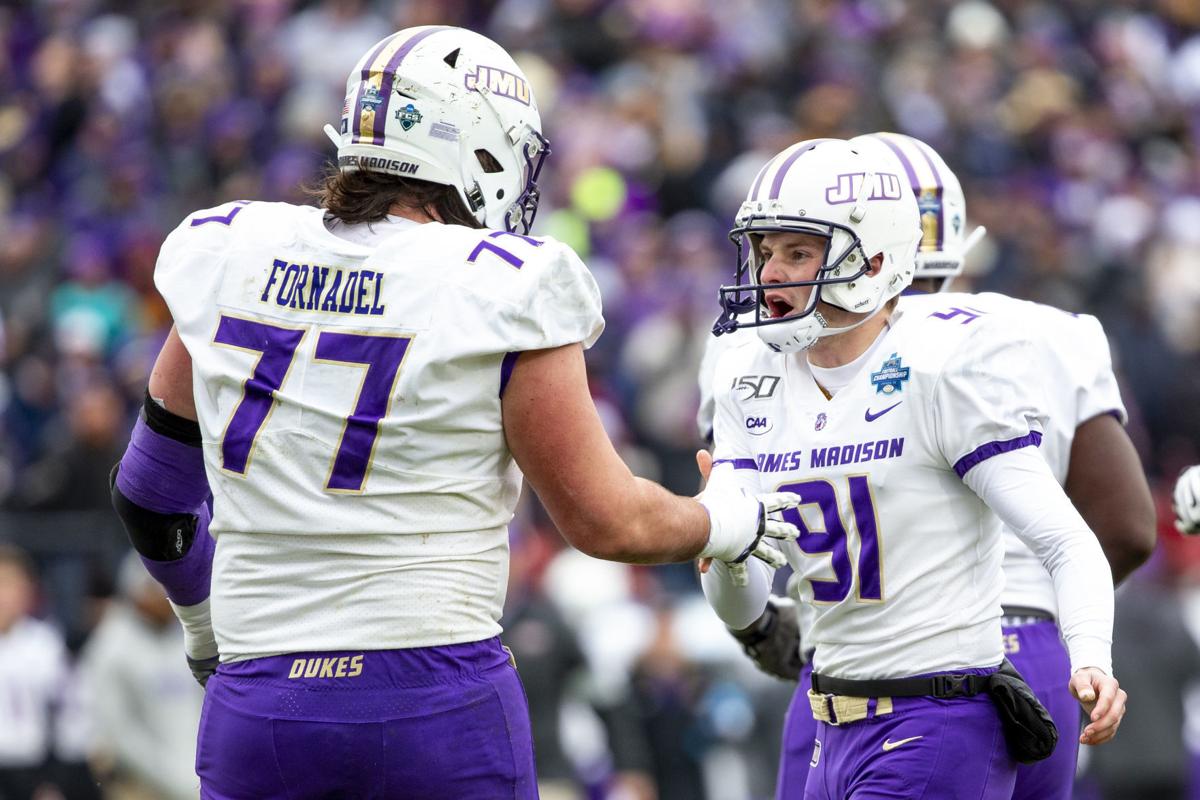 James Madison place kicker Ethan Ratke (91) is congratulated by offensive lineman Liam Fornadel (77) after kicking an extra point during the Dukes' loss to North Dakota State in the FCS championship game on Saturday in Frisco, Texas.

James Madison running back Latrele Palmer (21) carries the ball against two North Dakota State defenders during the Dukes' loss to the Bison in the FCS national championship game at Toyota Stadium in Frisco, Texas on Saturday.

James Madison place kicker Ethan Ratke (91) is congratulated by offensive lineman Liam Fornadel (77) after kicking an extra point during the Dukes' loss to North Dakota State in the FCS championship game on Saturday in Frisco, Texas.

FRISCO, Texas – Those were flashes of the future.

Ones of next fall and the few that follow, during the 28-20 loss James Madison suffered to North Dakota State in the FCS national title game on Saturday at Toyota Stadium in North Texas.

“No matter who leaves, it’s next person up,” Dukes junior safety and punt returner D’Angelo Amos said. “It’s like a light bulb. You change the light bulb, put a new one in and you still got to light it up.”

Amos has provided reasons of optimism before, shining as a redshirt freshman in the 2017 championship loss to the same perennial power of the subdivision with two punt returns of more than 30 yards.

He did it again against the Bison in this bout for the crown when his 35-yard punt return in the fourth quarter injected promising morale and ignited a comeback that nearly pushed North Dakota State into overtime during its quest to stay atop the FCS.

“I had my mindset the whole game that I’m not going to call a fair catch,” Amos said. “They made some good plays on me early on, but then they gave me a little light and I took it.

“I tried to give us something. They had a lot of momentum and they were shutting us down a little on offense. We’d drive on them, but they played great defense and I felt like it was something we needed and that if I got the crowd back into it, I knew it’d give us momentum to get down the field and for the most part, it did. We just didn’t finish.”

But Amos understood the situation and showed the instinct, as well as the guts to propel his teammates going forward and perhaps foreshadowed what his value will be as a senior.

He could be primed to take on the role of a captain.

He and offensive tackle Liam Fornadel, who will enter his third year as a starter in 2020, are equipped to handle those duties. And they’re as skilled as any players the Dukes will return, including a bevy of running backs that coach Curt Cignetti should manipulate the offense around.

All the rushers, specifically juniors Percy Agyei-Obese and Jawon Hamilton as well as freshmen Latrele Palmer and Solomon Vanhorse, who had responsibilities throughout the campaign are back. Agyei-Obese carried for 1,216 yards to go along with 19 rushing scores. Hamilton added 919 yards on the ground for the year, and Palmer possessed the brute force to run through the mighty Bison defense for 44 yards on eight carries - all in the second half of the championship game.

“He was breaking tackles and running hard,” Cignetti said. “And, so, he’s got a lot of talent, but keeping him on the field and injury-free has been the biggest challenge for us at this point, but he’s got a really bright future.”

“I’ve always been bigger than the people I played against,” the 5-foot-11, 228-pounder said, “so I like basically being a bully on the field.

“But the whole season I dealt with adversity, even starting with summer camp. I had injuries throughout camp and then in the Morgan State game, coach just decided to put me in and I went off. And then in the [New Hampshire] game, I went down with the same ankle [injury] and had surgery, but luckily, and I thank God, that I was able to come back.”

Even redshirt sophomore quarterback Gage Moloney managed the offense in a significant role, leading the unit in the title game for select plays in the Wildcat formation.

Though the trick-play try out of the set didn’t work, Moloney had a long run of seven yards in the scheme against North Dakota State.

“I was actually kind of surprised,” Moloney said of the plays designed for him that were installed two weeks prior to the title game, “because when I saw Wildcat on the board, I thought it would be for Percy or Latrele or someone else, and then they told me. I was like, ‘Heck yeah, I’ll run downhill all day.’ It was surprising, but I’m happy the coaches had some trust in me.

“I think having that experience does something for me and it probably builds some confidence that I don’t know about and I’m looking forward to the future.”

Palmer said: “[Moloney] had one run where he lowered his shoulder on one dude and that was pretty crazy. I didn’t expect that from him.”

Moloney will have a quarterback competition on his hands come spring as longtime backup Cole Johnson is set to return for his fifth season.

But the stage of a championship hanging in the balance wasn’t too large for the up-and-comers.

“The most challenging thing will be trying to do it again,” Hamilton said. “But it’s a mindset and everyone will have to buy in and we’ll put this thing together in order to make JMU successful.”

“We’re going to rebuild and we will be back next year,” Palmer added.