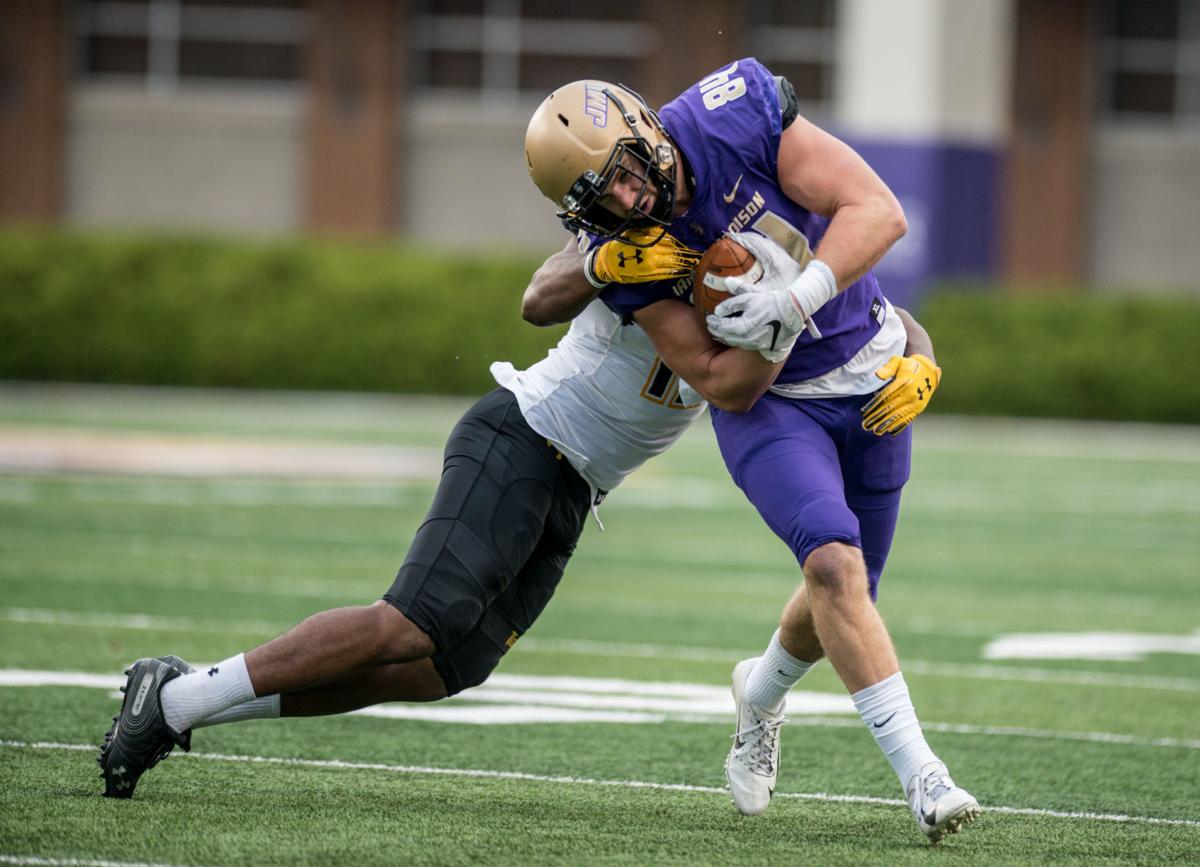 James Madison tight end Dylan Stapleton (84) powers past Towson linebacker Keon Paye (12) during the Dukes' win over over the Tigers in October. 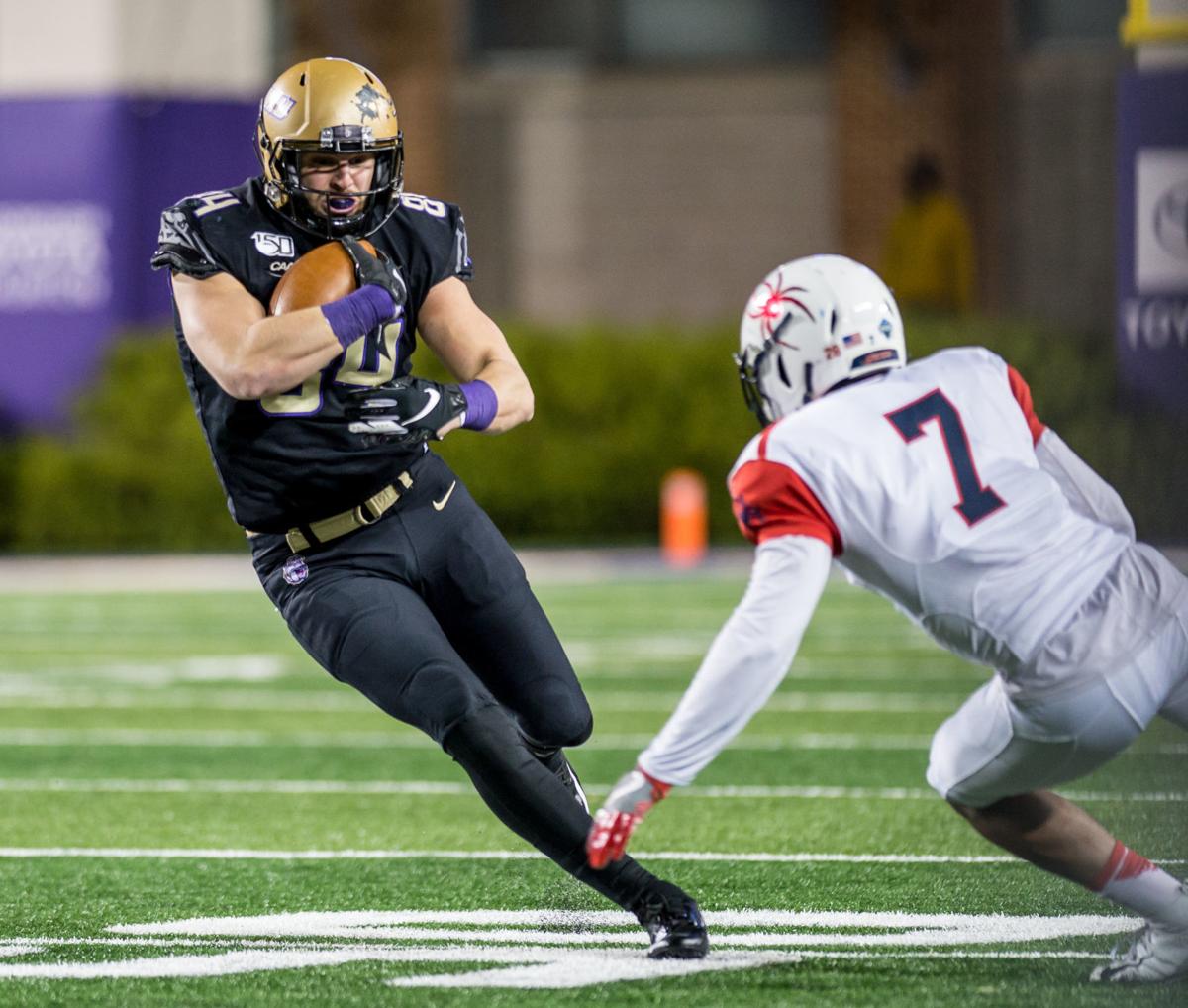 James Madison tight end Dylan Stapleton (84) turns up the field and away from Richmond defensive back Noah Nicholson (7) during the Dukes’ win over the Spiders at Bridgeforth Stadium this season.

James Madison tight end Dylan Stapleton (84) powers past Towson linebacker Keon Paye (12) during the Dukes' win over over the Tigers in October.

James Madison tight end Dylan Stapleton (84) turns up the field and away from Richmond defensive back Noah Nicholson (7) during the Dukes’ win over the Spiders at Bridgeforth Stadium this season.

The last time Weber State came to town Dylan Stapleton was more than 300 miles away from Bridgeforth Stadium.

He wasn’t a member of the James Madison football program yet and could only watch on television as his brother, wide receiver Riley Stapleton, caught eight passes for 189 yards and a touchdown as the Dukes rallied to knock off the Wildcats 31-28 in the quarterfinals of the 2017 FCS playoffs.

On Saturday, the two teams will square off again at 6:30 p.m., in the semifinals of this postseason.

“I was actually up at my old school, Slippery Rock, watching it,” Dylan Stapleton said, with a chuckle, earlier this week. “And it felt like every five minutes that I was freaking out because Riley made a good play or the defense had a good stop.”

Six months after that game Dylan Stapleton made the choice to leave the Division II program north of Pittsburgh and take on the challenge of playing in the FCS alongside his brother at JMU.

Since then, the tight end’s effort and production catapulted him from walk-on transfer to an All-Colonial Athletic Association second-team selection in just two seasons with the Dukes.

“It’s probably the best decision I ever made,” Stapleton said. “I came down here with a mindset that I would work my tail off and see what happens, and the summer training, film study and everything else, all that’s paid off.”

And now Stapleton rarely comes off the field when JMU’s offense is on it. He can play on the line of scrimmage as a bruising tight end to aid the running game or even split out in the slot to catch passes if need be.

His 27-yard reception on a wheel route in the Dukes’ quarterfinal win over Northern Iowa last Friday set up the opening touchdown of the contest and was the longest play of the game for either side.

“We practiced it all week,” Stapleton said. “And it was just oozing off the ball, selling it a little bit and hopefully [the defense] bit on it, and then they did. So it was definitely one of those things that me and Ben [DiNucci] connected on.”

Entering Saturday’s semifinal, Stapleton has 25 catches for 329 yards and a touchdown this season.

“He’s just become so consistent both as a blocker and a receiver,” first-year JMU coach Curt Cignetti said. “He’s out there every day practicing. He doesn’t miss practice. He doesn’t miss game time. He’s a really valuable player for our offense and does a lot of things for us. He’s top notch.”

What’s most flabbergasting is hardly anyone recruited Stapleton out of Indiana (Pa.) High School.

But Slippery Rock coach Shawn Lutz, who did, said he had the vision then that Stapleton, at 6-foot-5, could thrive in college like he is now in Harrisonburg.

“I had the chance to see him play basketball, number one,” Lutz recalled. “He’s a kid that dunked a basketball with no problem, and then he was just an outside receiver in high school that had all that height to him. He had great hands, and for an outside receiver he wasn’t a burner, but you knew if that kid would put on some weight with as good of an athlete as he was with his hands and his jumping ability, he could be a freaking Power Five guy or a MAC guy.”

Stapleton has added that weight, now up to 242 pounds. Lutz said he remembered Stapleton weighing in around 220 pounds at Slippery Rock.

Not coincidentally, Stapleton said he feels he’s improved most as a blocker during his time at JMU.

“We run an air raid here and we knew he could be a slot for us,” Lutz said. “We used him more as a bigger slot guy, and I know he’s blocking a lot for JMU, but he’s got such good hands.

“He would’ve broken so many records here because he gives you a mismatch in the slot against a safety that’s smaller or if they put a linebacker on him, he can out maneuver that guy. He would’ve broken records here. … I thought he could’ve been an All-American here and I still think whatever happens to him, he’ll have a shot at the next level.”

Lutz said he enjoyed coaching Stapleton. And although he was disappointed when Stapleton left, he completely understood why.

“I respected the fact he wanted to go play with his brother,” Lutz, who played his college ball at West Virginia, said, “and go Division I because he knew he could play Division I. And how could I argue with James Madison? It’s great football, great academics. I can’t argue that.”

This Saturday, the Dukes will need Stapleton at his best, too.

Weber State features two standout defensive ends, Jonah Williams and Adam Rodriguez, who have combined for 18 sacks and 24 tackles for loss. Stapleton said JMU was working on different ways he could help the offensive tackles slow Williams and Rodriguez.

“I couldn’t be happier with the position I’m in right now,” Stapleton said. “I think that was just really fun for me to come down here and play. I wasn’t sure what to expect, but I’ve really enjoyed how I’ve improved over the last two years and I’m looking forward to ending it on a good note.”