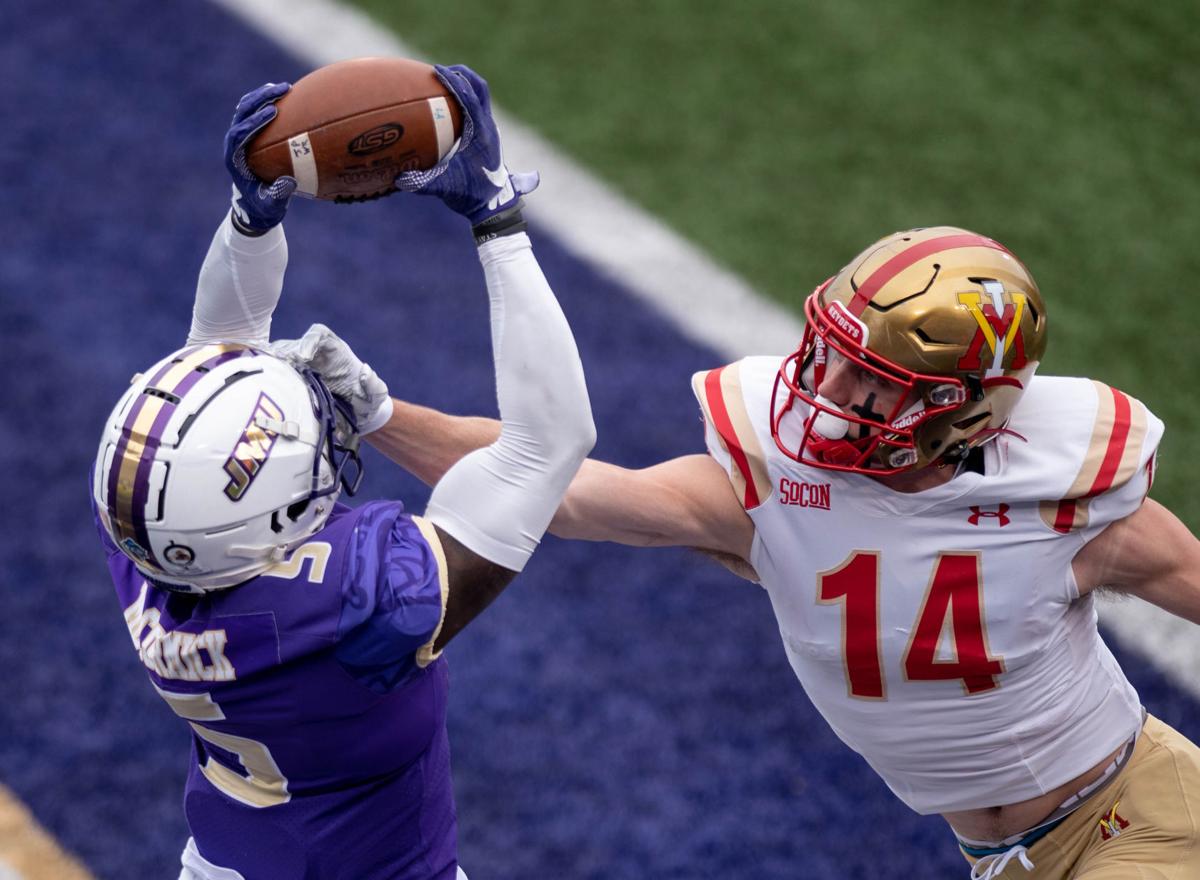 James Madison cornerback Wesley McCormick (5) intercepts a pass meant for VMI wide receiver Jakob Herres (14) during the Dukes’ win in the opening round of the FCS playoffs on Saturday in Harrisonburg. 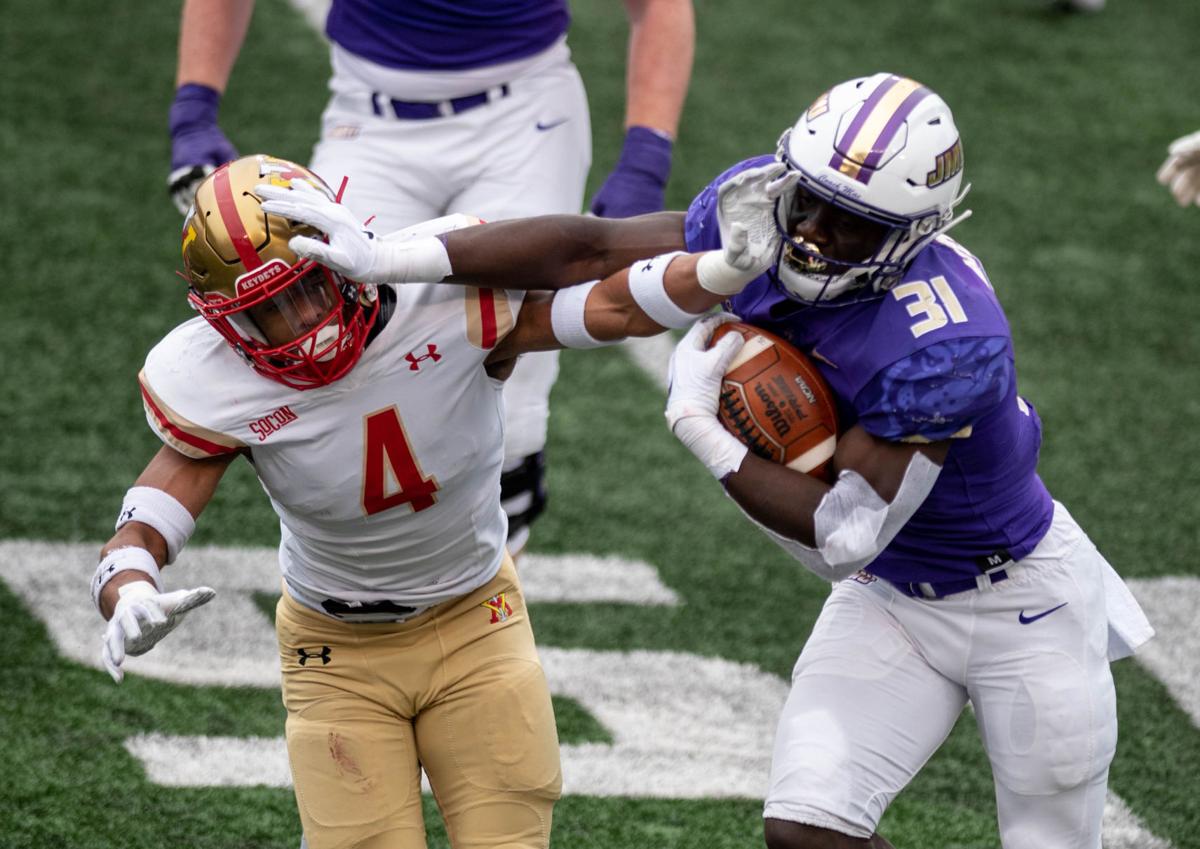 James Madison running back Percy Agyei-Obese (31) stiff arms VMI defensive back A.J. Smith (4) during the Dukes’ win in the FCS playoffs on Saturday in Harrisonburg. 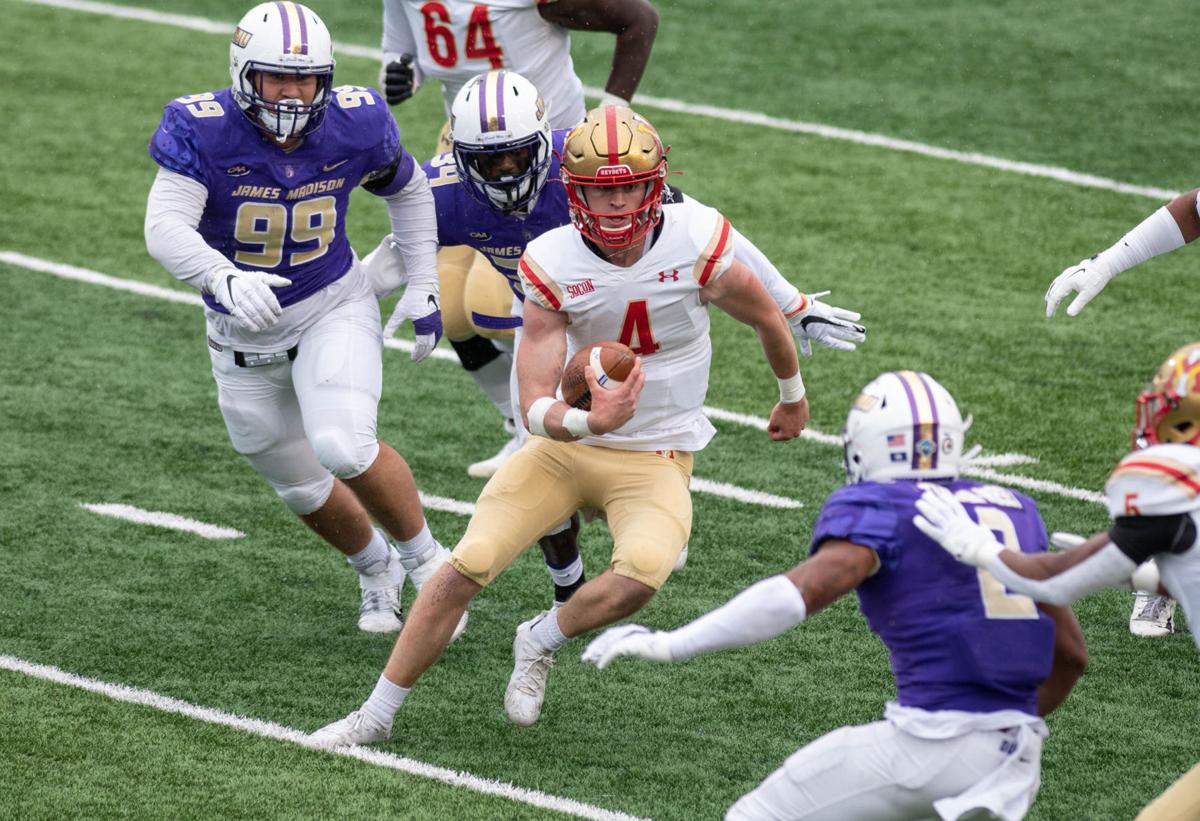 James Madison cornerback Wesley McCormick (5) intercepts a pass meant for VMI wide receiver Jakob Herres (14) during the Dukes’ win in the opening round of the FCS playoffs on Saturday in Harrisonburg.

James Madison running back Percy Agyei-Obese (31) stiff arms VMI defensive back A.J. Smith (4) during the Dukes’ win in the FCS playoffs on Saturday in Harrisonburg.

An early triumph in one-on-one coverage was enough.

Enough to provide the nation’s top defense every bit of belief and swagger it needed to reduce its opponent’s heralded air raid attack into an ordinary offense.

“Wesley made a huge play to begin the game,” James Madison linebacker Kelvin Azanama said of his teammate’s first-quarter interception in a 31-24 victory on Saturday.

Senior cornerback Wesley McCormick, pitted in single coverage versus VMI’s All-American wide receiver Jakob Herres, battled the 6-foot-4 pass-catcher and snagged an interception in the end zone to halt the Keydets’ first drive and prevent them from gaining an initial edge or the first burst of momentum.

The turnover was also the start of a dominant first half for the No. 3-seed Dukes, in which they scored three touchdowns and only yielded a field goal, en route to the victory over the visiting Keydets in the opening round of the FCS playoffs on Saturday at Bridgeforth Stadium.

It was the 10th consecutive win in a home playoff game for JMU, dating back to 2016.

McCormick’s pick was the first of three interceptions the Dukes tallied against VMI quarterback Seth Morgan, who entered Saturday with a touchdown-to-interception ratio of eight-to-one.

Cornerback Taurus Carroll recorded an interception in the second quarter and defensive lineman James Carpenter tipped a fourth-quarter pass from Morgan into the air before intercepting the ball.

“All those turnovers were huge plays, but that one in particular [from McCormick] was really, really big,” second-year JMU coach Curt Cignetti said. “He does a nice job with press coverage and he’s made a lot of good plays. … But I think defensively when you play all that press, to come up with that kind of interception, that’s a real credit.”

Said VMI coach Scott Wachenheim: “Jake is our guy and we had him one-on-one, and [JMU] made a better play than us.”

Azanama, who had four tackles on Saturday, said the plan was to force the freshman Morgan into mistakes.

The Dukes began building their lead shortly after McCormick’s interception in the same opening stanza when running back Jawon Hamilton turned a handoff from his own 1-yard line into the longest play in FCS postseason history.

His 99-yard touchdown run, which set a new school and subdivision playoff records for the longest run, provided JMU a 7-0 advantage.

And while that swarming Dukes defense limited VMI’s pass-happy system to 98 passing yards in the first 30 minutes, their rushing offense provided problems the Keydets had no solutions for.

He finished with 110 yards and a score while Hamilton ran for a game-high and career-best 171 yards and a touchdown.

“Their running backs are extremely talented,” Wachenheim said when asked about why the Keydets had trouble stopping JMU’s running game.

Agyei-Obese’s 32-yard run in the fourth quarter set up kicker Ethan Ratke’s 32-yard field goal, which extended JMU’s edge to 31-17 with 2:18 left in the game. As a team, JMU finished with 305 yards on the ground.

“The holes were there,” Hamilton said. “They stop the box just like every other team has this spring season, but we’ve got a great offensive line, a coach who is calling great plays and our running back room is capable of anything, so we put it together and made it work.”

JMU (6-0) advances to the national quarterfinals to face North Dakota, which beat Missouri State 44-10 on Saturday.

The storybook season for VMI (6-1), which made its first playoff appearance, is over. The Keydets scored two fourth-quarter touchdowns to narrow the deficit. Herres finished with 13 catches for 171 yards and a score.

“Our team showed we belong out here,” Wachenheim said.