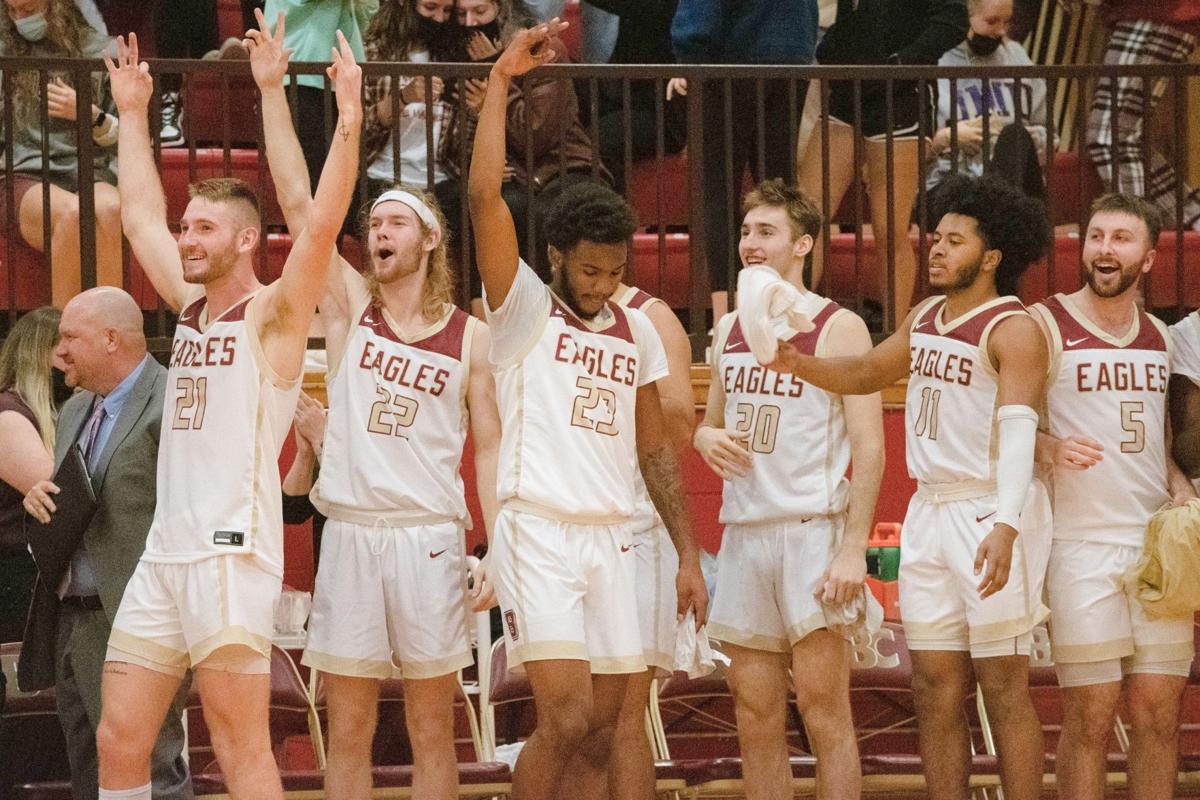 Members of the Bridgewater College men’s basketball team celebrate a 3-pointer from the bench during a win earlier this season. The Eagles are currently on a two-game winning streak. 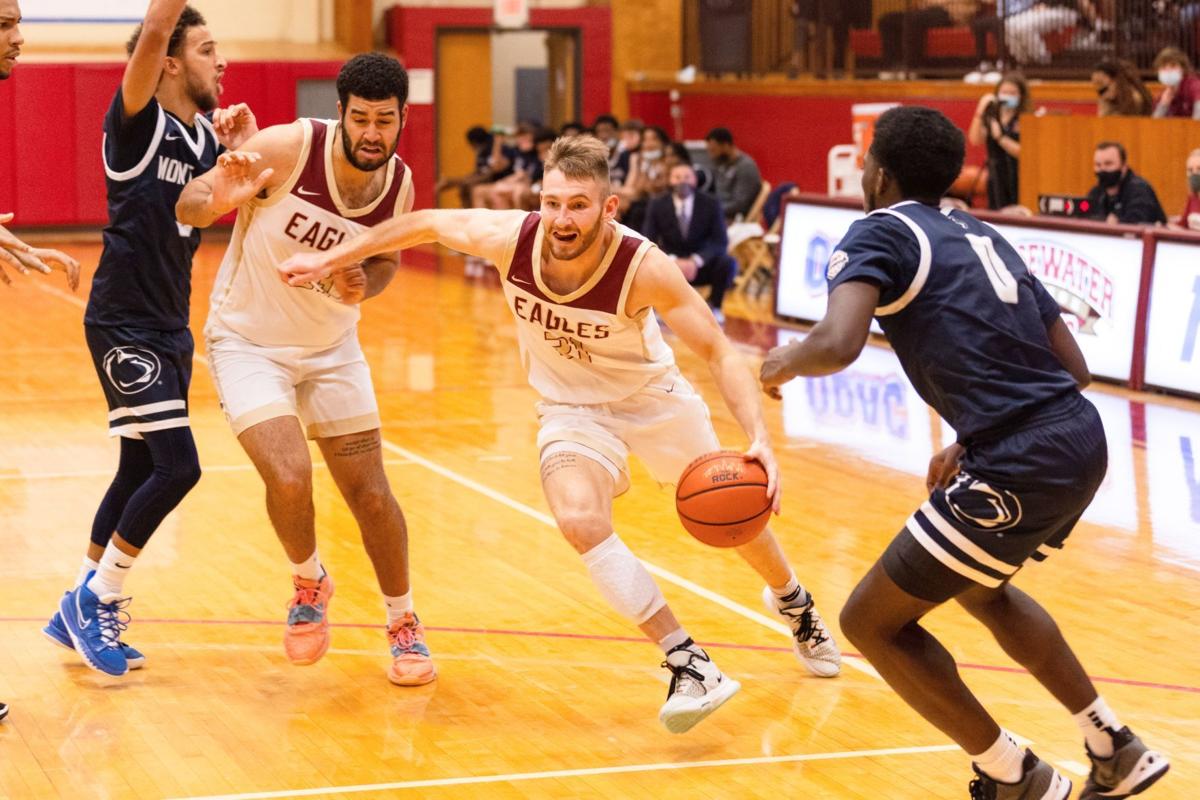 Bridgewater’s Andy Packs drives the lane during a game against Penn State Mont Alto earlier this season in Nininger Hall. Pack is averaging a team-high 17.6 points per game for BC.

Members of the Bridgewater College men’s basketball team celebrate a 3-pointer from the bench during a win earlier this season. The Eagles are currently on a two-game winning streak.

Bridgewater’s Andy Packs drives the lane during a game against Penn State Mont Alto earlier this season in Nininger Hall. Pack is averaging a team-high 17.6 points per game for BC.

Bethany College showed Bridgewater something it wasn’t expecting in the non-district men’s baskebtall meeting between the two teams on Dec. 17: a 1-3-1 zone.

It was the first time Bethany had run that defense, so the Eagles coaching staff didn’t prepare for it.

The zone allowed the Bison to build a 14-point lead, but that didn’t last for long. Bridgewater’s coaching staff quickly adjusted and it worked, scoring 49 points in an 11-minute span.

Bridgewater eventually took a 14-point point lead to the break and later turned it into an 108-80 win in which it finished just three points shy of a program record for most points in a game.

That win marked the Eagles second straight win after losing its previous five, creating a turning point in Bridgewater’s season after a tough early-season slate.

“I think it shows our guys can take a punch and throw one back,” BC coach Steve Enright said of the mid-game adjustments. “That’s what you have to do to win a game on the road.”

Bridgewater’s five-game losing streak included two Old Dominion Athletic Conference losses to Roanoke and Lynchburg. They turned it around, though, beating Catholic University 80-75, who entered the game at 7-1 before taking down Bethany.

The hard schedule to start the season wasn’t by accident and Enright said he saw the dividends of it in their last two games.

During the Eagles’ first 10 games, Enright said he was trying to find the right rotation and the right blend of players. As he searched for the right combinations, the Eagles started 10 different players.

Senior guard Andy Pack, an Elon transfer, has been the focal point of Bridgewater’s offense, averaging 17.6 points and starting all 10 games. Enright said that even though Pack transferred in before last season, he’s still only played just 16 games with the Eagles.

“He’s shooting the ball very well lately, has really made 3s the last couple games, leading the team in rebounding, and he’s getting better as a leader,” Enright said of Pack.

“He’s supremely talented for this level, he’s just got to figure out consistency in his approach,” Enright said of Topper. “He had a really good breakout game against Bethany. ... He played really well and, hopefully, he carries that into conference play for us.”

The Eagles haven’t played since that win at Bethany after a game against Mary Baldwin was moved from New Year’s Eve to Monday before it was canceled due to COVID-19. Then, Bridgewater found a new opponent, William Peace, but they called while on the bus en route to play, canceling the game again.

The Eagles will hit the court again, hosting Shenandoah at Nininger Hall on Wednesday night, kicking off the heart of ODAC play. The Hornets will play a variety of defenses and Enright said playing consistent offense will be key.

“They play multiple different defenses, they’re going to throw zone at us, they’re going to play man-to-man,” Enright said. “They change defenses a lot, so I think we have to stay consistent and not turn the ball over on the offensive end.”

The Hornets are led by Jaylen Williams, who’s averaging 22.2 points and is shooting 51.7 percent from the field in 11 games this season.

“We’ve got to make it difficult for him,” Enright said of Williams. “If he’s going to get 20, 25 points, it’s going to have to be on a very high volume of shots.”

Enright hopes when the Eagles take the floor again for the first time in almost three weeks on Wednesday that his team will show it learned from its early-season losses.

“We would have to play really well to win those games, we knew that, we fell a little short,” Enright said. “Hopefully, we can correct some of those things as we move into conference play in the back half of the year.”