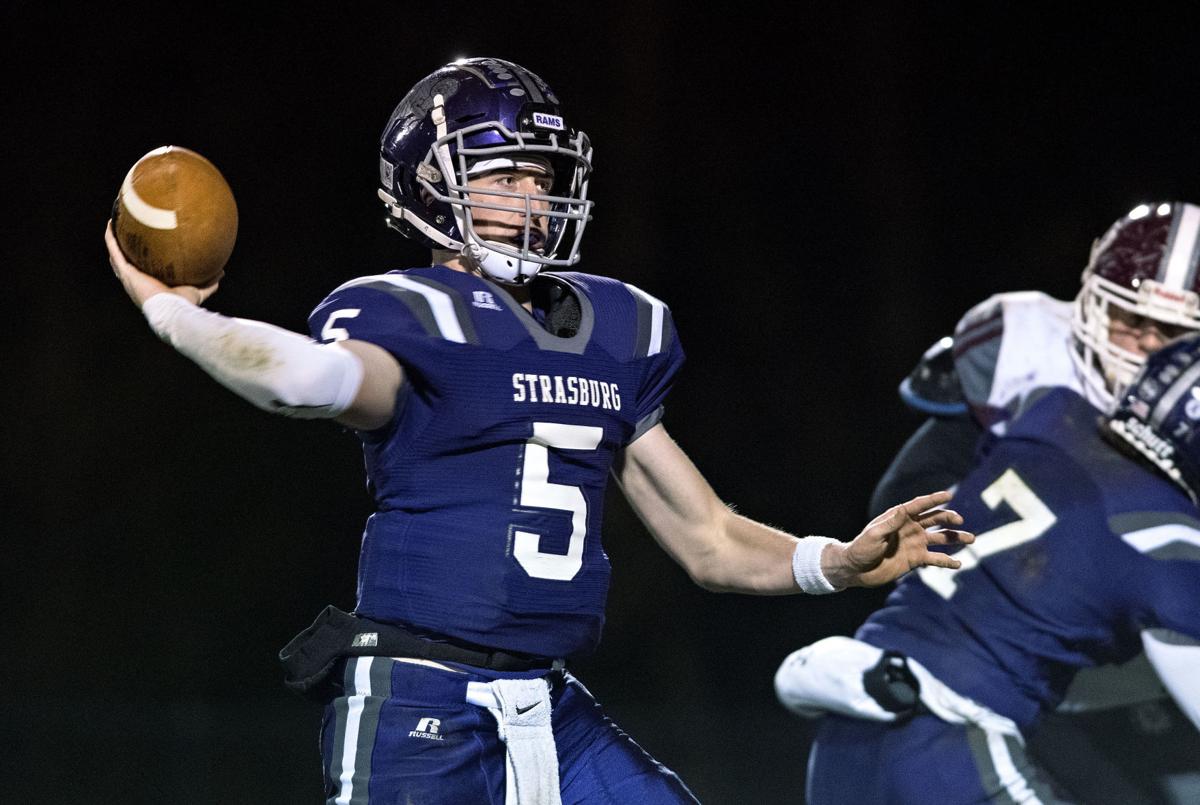 Former Strasburg signal-caller Chase Hart prepares to throw a pass during a football game at home against Luray in 2019. Hart signed his national letter of intent with William & Mary on Wednesday morning. 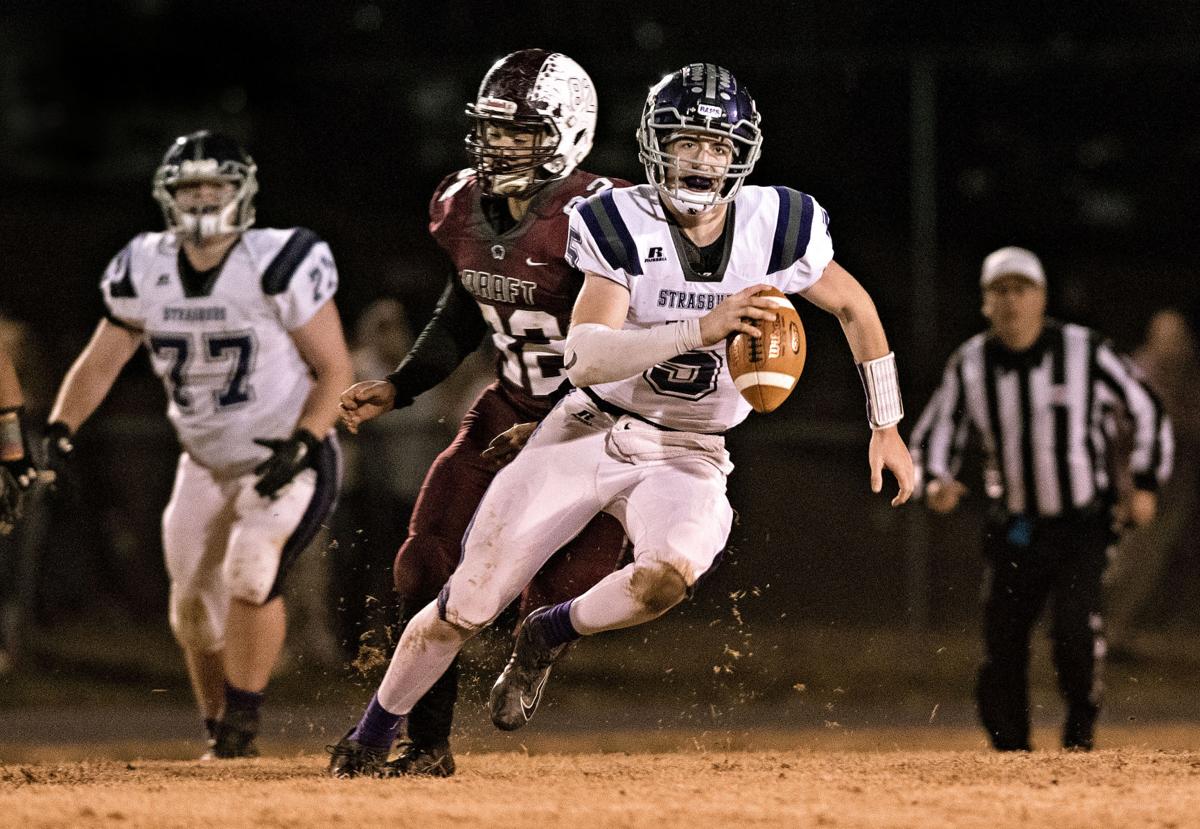 Former Strasburg quarterback Chase Hart scrambles in the backfield as Stuart Draft’s Jayden Watkins pursues him during the Region 2B semifinals against Stuarts Draft in 2019.

Former Strasburg signal-caller Chase Hart prepares to throw a pass during a football game at home against Luray in 2019. Hart signed his national letter of intent with William & Mary on Wednesday morning.

Former Strasburg quarterback Chase Hart scrambles in the backfield as Stuart Draft’s Jayden Watkins pursues him during the Region 2B semifinals against Stuarts Draft in 2019.

Chase Hart could picture it since he was a young football player.

Hart, along with his family, went to countless James Madison football games at Bridgeforth Stadium growing up.

It was just a 40 minute drive from his hometown of Strasburg.

He’d watch as the Dukes rolled past their FCS opponents and he’d see the streamers fly after each JMU touchdown. He said he knew he wanted to be on the field one day, instead of in the stands.

The young Hart’s dream came true Tuesday after announcing he was transferring to JMU from William and Mary.

“I could always picture myself playing there,” Hart said. “That’s just not how it worked out, out of high school and then luckily in the portal, I got an opportunity to be on the team and me and my family are just super pumped up.”

Hart will join the Dukes as a walk-on quarterback for next season and is planning to enroll at JMU for the spring semester. He adds depth to the Dukes’ quarterback room, joining freshmen Billy Atkins and Clay Vance and incoming high school signee Alonza Barnett III.

The decision to transfer to JMU was an easy one for Hart. He said he told the JMU coaching staff that he was going to pick the Dukes about two weeks after they began communicating.

“I just knew I wanted to be at JMU,” Hart said. “I’ve been looking forward to this basically my whole life.”

In high school, Hart didn’t receive a ton of attention from college coaches, even though he lit up the record books at Strasburg High School. Hart holds the records for career passing yards (4,100) and career touchdown passes (47) at Strasburg.

“Chase was a studier of the game,” said Mark Roller, Hart’s head coach at Strasburg. “He knew, understood what was going on out there. He was able to be a great leader on and off the field, just in his actions.”

Roller said Hart’s arm strength set him apart from other quarterbacks he saw play, but during Hart’s senior season, they encouraged him to run the ball more.

As Hart put it, “I’m not Mike Vick or anything, I’m not a big runner, but I feel like I’ve got enough athleticism to get outside the pocket and make throws on the run.”

“I know all these schools want a mobile quarterback. Well, they’re getting one at JMU and a big-time arm,” Roller said. “I’m looking forward to seeing what he can do at JMU.”

After he graduated high school, Hart chose William and Mary over Central Connecticut State to stay closer to home. But after redshirting during the COVID-19 shortened spring season, Hart didn’t play much this fall.

He did make one appearance with the Tribe, recording one passing attempt, a 6-yard completion at Virginia. Hart said he wasn’t nervous when his number was called and it left him wanting more.

“I felt that this was what I was working for,” Hart said of his collegiate debut. “I got a little taste of being in a game, but I want more, you know? I want to do a lot on the field, win a lot of games.”

Though he didn’t see much of the field, Hart said he learned to be patient while playing at William and Mary. He said it was tough, but he kept his spirits up to be a good teammate to others on the sidelines.

Just because he wasn’t the No. 1 signal-caller, didn’t mean he wasn’t preparing like he was. Hart said he treated every game as if he was the starting quarterback, readying at any moment to go into the game.

“It just ended up not being the right place for me,” Hart said of William and Mary. “I felt that I’d be happier at another place. Luckily, I found that home at JMU.”

As a walk-on at JMU and with four years of eligibility remaining, Hart said he’s ready to compete in the quarterback room and improve to work his way up the depth chart.

“I think my opportunity will happen in game and I just got to make the most of it,” Hart said. “I’m just going to keep working until that happens.”