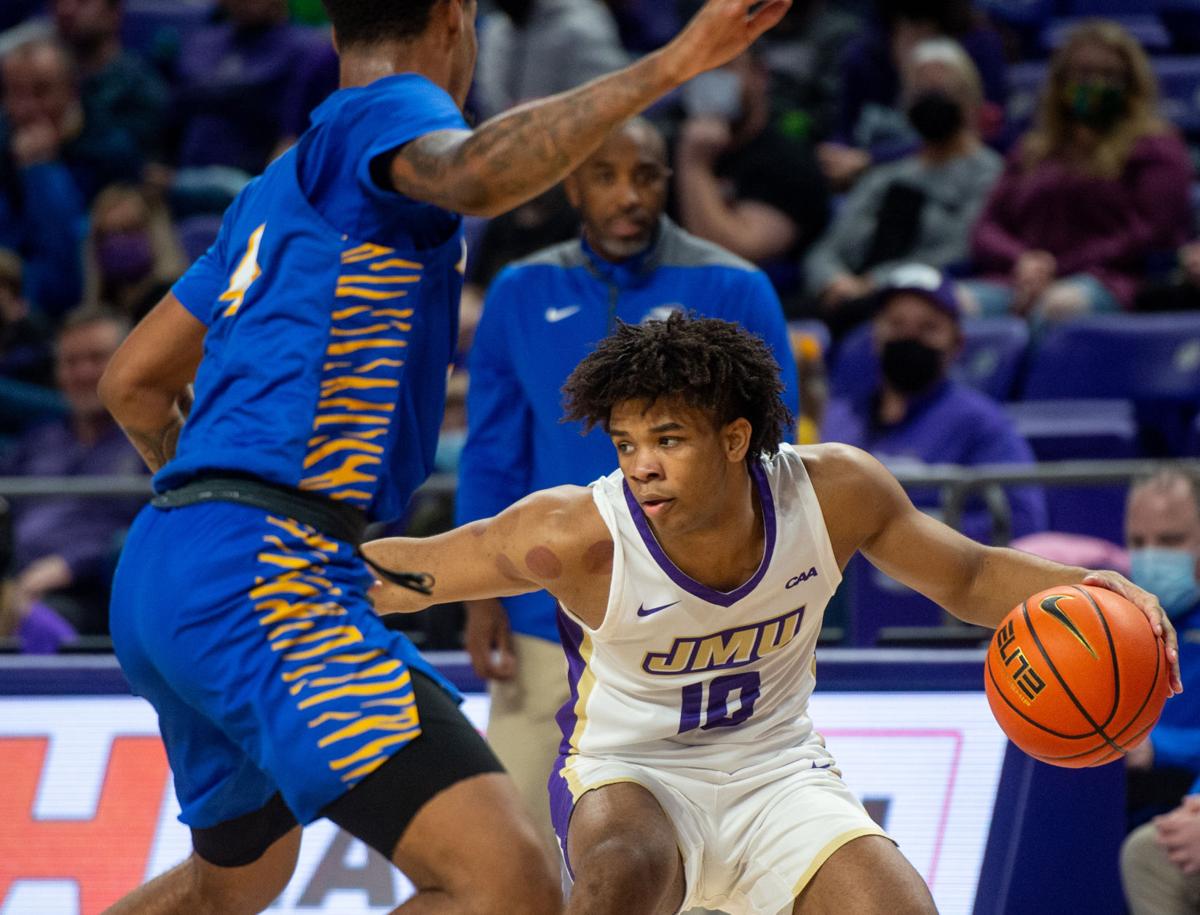 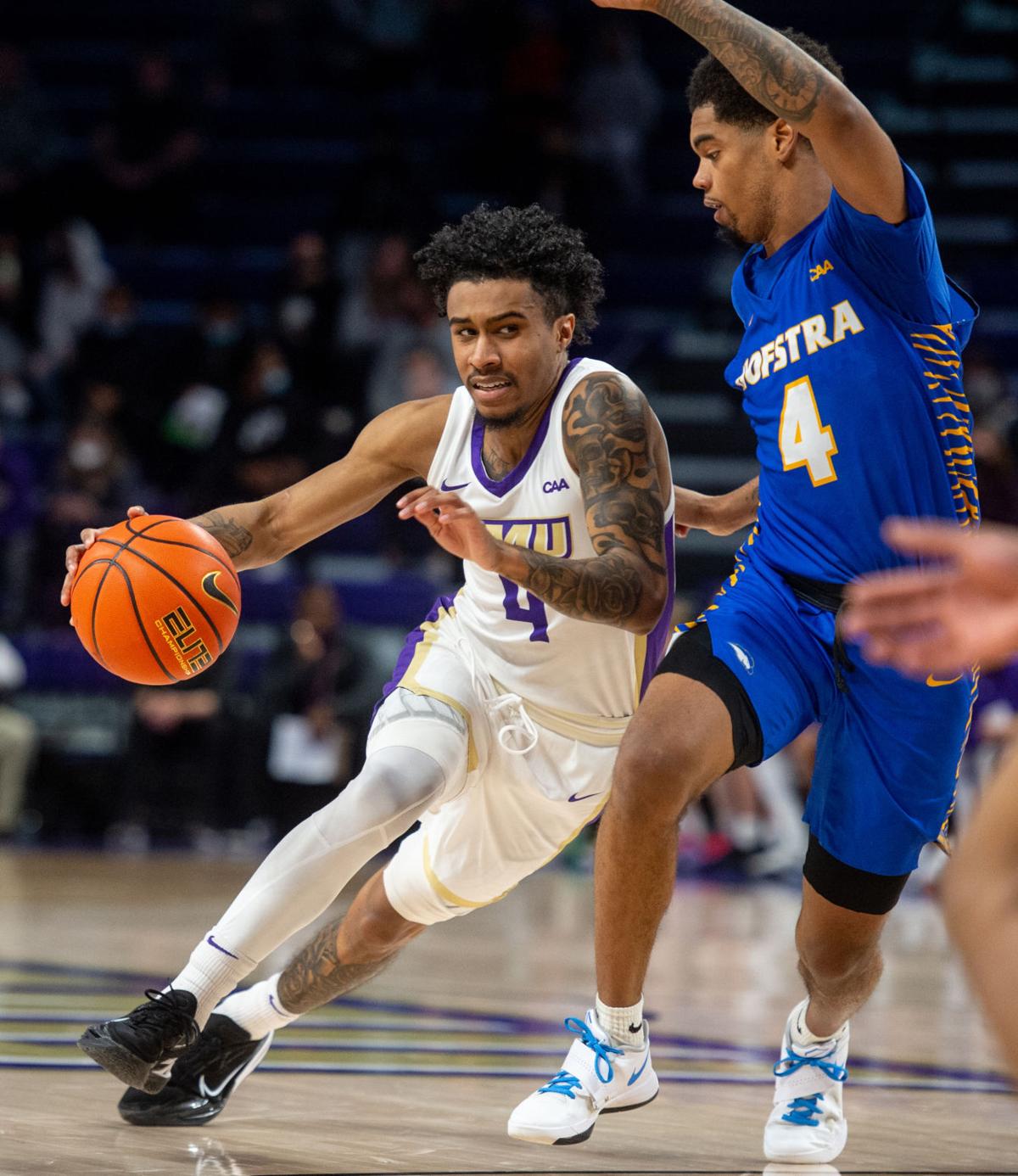 James Madison guard Vado Morse (4) drives up the court against Hofstra guard Aaron Estrada (4) during the first half Sunday at the Atlantic Union Bank Center in Harrisonburg.

James Madison guard Vado Morse (4) drives up the court against Hofstra guard Aaron Estrada (4) during the first half Sunday at the Atlantic Union Bank Center in Harrisonburg.

James Madison made the clutch defensive plays it had all season in the final two minutes of Sunday’s Colonial Athletic Association opener against Hofstra.

But unlike all those close victories the Dukes pulled out in non-conference play, JMU didn’t convert on the offensive end.

JMU twice came up with steals down three, but failed to score in transition either time before Hofstra made its free throws down the stretch to secure an 87-80 victory in CAA action at the Atlantic Union Bank Center in Harrisonburg.

Oregon transfer Aaron Estrada scored 20 points to lead the Pride (9-7, 1-1 CAA), which trailed the majority of the game but grabbed the lead with less than three minutes to go and didn’t give it back. JMU (9-3, 0-1 CAA) had four players in double figures, led by Vado Morse with 24 points, but the Dukes didn’t score in the game’s final 3:45.

“I knew this was going to be a tough game,” JMU coach Mark Byington said. “They are a talented team, No. 1. We’ve dealt with some kind of hard circumstances that kind of kept us from playing the best we could. That being said, I thought we played the best we could for this situation and this moment right now. Obviously, that wasn’t good enough to win today. The guys gave everything they had, but the fatigue was real.”

It was something of a reversal of roles for each team. All nine of JMU’s victories have been by single digits with the Dukes making key plays down the stretch. Hofstra, on the other hand, had a big win at Arkansas this season but was coming off a loss at William & Mary that saw the Pride fold in the final minute.

“Down at the William & Mary game we didn’t make these plays down the stretch and it cost us the ballgame,” Hofstra coach Speedy Claxton said. “It was definitely good to see that we are capable of making those plays.”

Takal Molson provided 16 points for the Dukes off the bench while Terell Strickland added 12 and Julien Wooden 10. Darlinston Dubar finished with 19 for Hofstra while Abayomi Iyiola had 15 points and 15 rebounds and Hampton native Jalen Ray added 15 points for the Pride.

After almost an entire month between games thanks to COVID-19 cases within the program, JMU looked energized rather than rusty as the game began. Morse drew a foul while scoring on the Dukes’ first possession and JMU quickly ran up a 7-0 lead barely a minute into the game.

But after an early timeout, the Pride settled in and five of its next six shots to erase JMU’s advantage by the 13:47 mark of the first half. The teams made a habit of trading the lead from there with Estrada scoring often from the outside for Hofstra.

As the first half wore on though, JMU’s own guards — Morse and Strickland in particular — heated up for the Dukes. The pair, both listed at just 6-feet tall, combined to score 17 straight JMU points as the Dukes extended the lead to eight points with less than four minutes to go in the first half.

“Everyone knows [Strickland] brings that defensive intensity,” Morse said. “I try to do the same thing on the defensive end, but I’m more of an offensive player. But it’s kind of fun for sure playing with each other on the court.”

Hofstra, however, wouldn’t let JMU stretch the lead to double-digits. Instead, the Pride closed the gap in the opening period’s final minutes and the Dukes went to the locker room hanging onto a 44-43 lead.

“We weren’t ourselves in our focus, especially on defense,” Byington said. “We had 19 turnovers and it leads to them shooting the ball 13 more times than us. You can’t give another team 13 more attempts. Hopefully this is the worst we play the rest of the year.”

The second half began in a similar back-and-forth style. Ray hit back-to-back 3-pointers as Hofstra pulled ahead only to see Julien Wooden nail a pair of triples for the Dukes.

As the half continued, the pace got only more frantic. Hofstra scored 27 points off JMU turnovers, but the Dukes were hot from 3-point range and a jumper from the corner by Terrence Edwards made it a 62-62 game with 11 minutes to go.

By the time the clock hit four minutes to go, another basket by Estrada had put Hofstra ahead 78-77. Molson soon answered with an acrobatic reverse layup to put the Dukes back on top.

Hofstra responded and led 83-80 with less than two minutes to go when JMU’s defense came up with a pair of steals to give the Dukes a chance, but they were unable to convert a layup then threw the ball away after the second steal.

“When you don’t have the practices and the reps and conditioning, one thing that really goes is your timing,” Byington said. “It really hit that group toward the end. The timing was off the entire game, but I think it was hidden a little bit that we shot the ball so well.”

Now JMU must get ready for a quick turnaround with a game Tuesday at home against Northeastern.